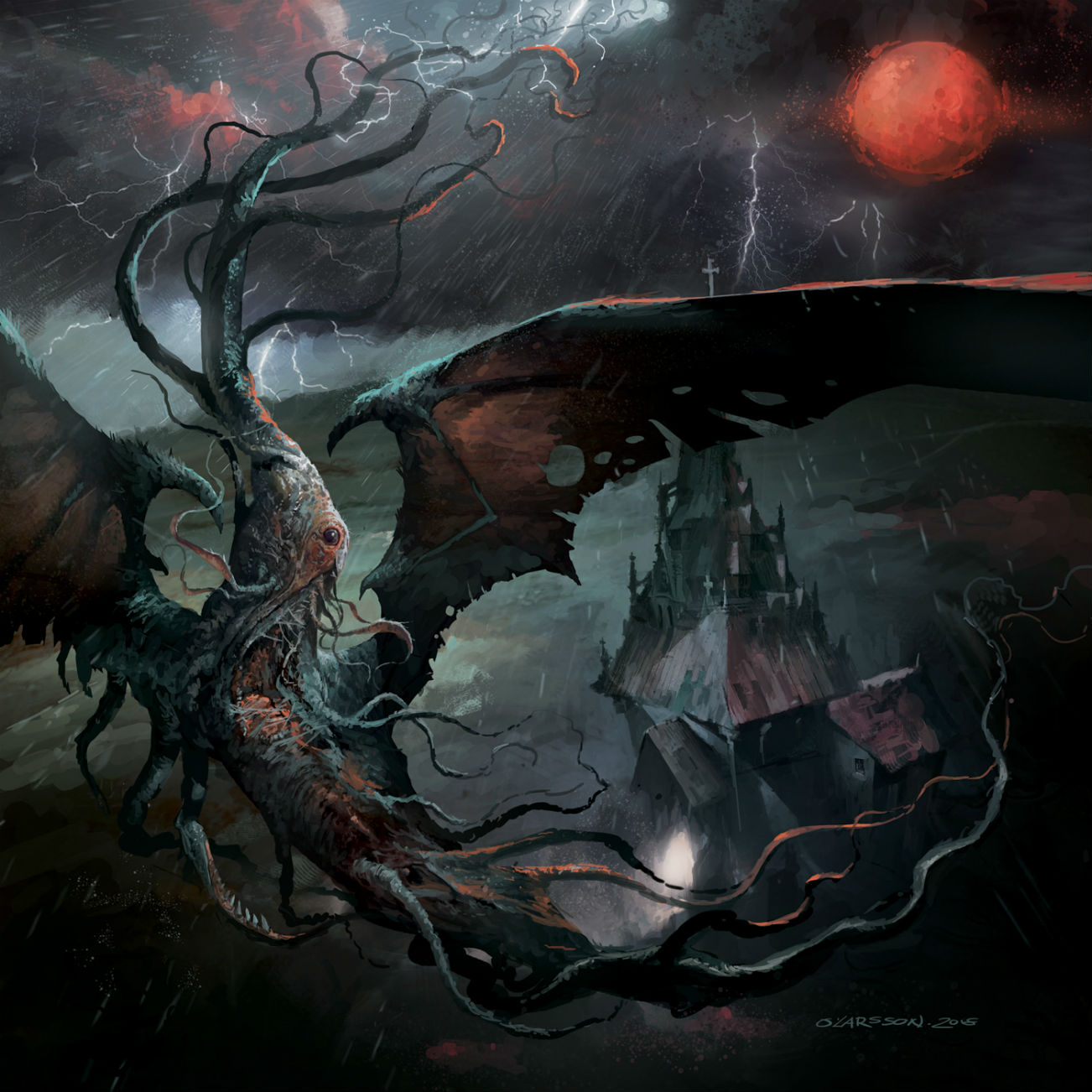 Whilst H.P. Lovecraft’s legacy has inspired the artwork, lyrics, concepts and song titles of countless bands over the years within the realms of metal, very few worship at the altar of Yog‑Sothoth quite as devotedly as Sulphur Aeon. The German quintet’s enthusiasm for the venerable horror master and his works is about as inconspicuous as Ola Larsson’s jaw-dropping album art, which once again serves to fuel the sensation of being dropped unceremoniously into Lovecraft’s world of elder gods and boundless shadow.

As the waning year clings to its final moments, The Scythe of Cosmic Chaos grasps hold and envelops with a hunger that proves a welcome surprise at this late stage. Foregoing their customary introductory track, “The Cult of Starry Wisdom” pulses with a ritualistic fervour as M. introduces his newfound somber vocal melodies before the band’s trademark riff-laden death metal charge erupts in a relentless barrage of blast-beats and drum-rolls courtesy of an on-form D., whose career-best performance stands out alongside superlative lead guitar work and rousing melodies. The excellent “Yuggothian Spell” further emphasises M.’s chanting as a compelling new dimension to Sulphur Aeon’s sound, immersing the listener deeper into Lovecraft’s starless void and unnerving mythos.

It’s near impossible to not fall under the band’s complex “Yuggothian Spell”.

While the group’s outstanding debut Swallowed by the Ocean’s Tide and 2015’s Gateway to the Antisphere were both remarkable albums in their own right, The Scythe of Cosmic Chaos is the sound of a band more focused than ever before, with lyrical themes across multiple songs pointing towards a specific story – the case in point being the wonderfully creepy “The Haunter of the Dark” [1] – which encapsulates the menacing dread much more succinctly than the vast oceanic terror of Lovecraft’s most infamous creation [2].

The band’s key strength lies in their ability to create atmosphere whilst sacrificing none of their death metal ferociousness, with both elements dominating their sound equally yet neither giving way to the other. “The Oneironaut – Haunting Visions within the Starlit Chambers of Seven Gates” [3] peddles more than just syllables, and alongside the stomping assault of “The Summoning of Nyarlathotep” and epic centrepiece “Sinister Sea Sabbath” [4] sees M. hollering over a wave of dynamic death metal that moves at a crawling pace yet punishes with levels of energy and enthusiasm that remain throughout.

Sulphur Aeon have always managed to vividly capture the profound sense of tension and insatiable darkness that is undeniable within Lovecraft’s works, and The Scythe of Cosmic Chaos stands as a banner for death metal that is as uncompromising as it is atmospheric; as driven by extremity as it is driven by melody. As the world left behind by the New England horror master continues to inspire the music of so many [5] as we satiate our appetites for strange aeons, The Scythe of Cosmic Chaos marks a three-album streak for the Germans, who continue to push themselves technically while exploring terrible, nebulous realms that were never meant to be discovered, and in those lairs of the Deep Ones they shall dwell amidst wonder and glory forever.

By clicking play, you’ve got your chance to hear the full album.

01. Cult of Starry Wisdom
02. Yuggothian Spell
03. The Summoning of Nyarlathotep
04. Veneration of the Lunar Orb
05. Sinister Sea Sabbath
06. The Oneironaut – Haunting Visions Within the Starlit Chambers of Seven Gates
07. Lungs into Gills
08. Thou Shalt Not Speak His Name (The Scythe of Cosmic Chaos)

1. The Haunter of the Dark
2. The Call of Cthulhu
3. The Dream-Quest of Unknown Kadath
4. The Shadow over Innsmouth
5. In 2017 alone there we had The Great Old Ones’ EOD: A Tale of Dark Legacy and The Lurking Fear’s Out Of The Voiceless Grave