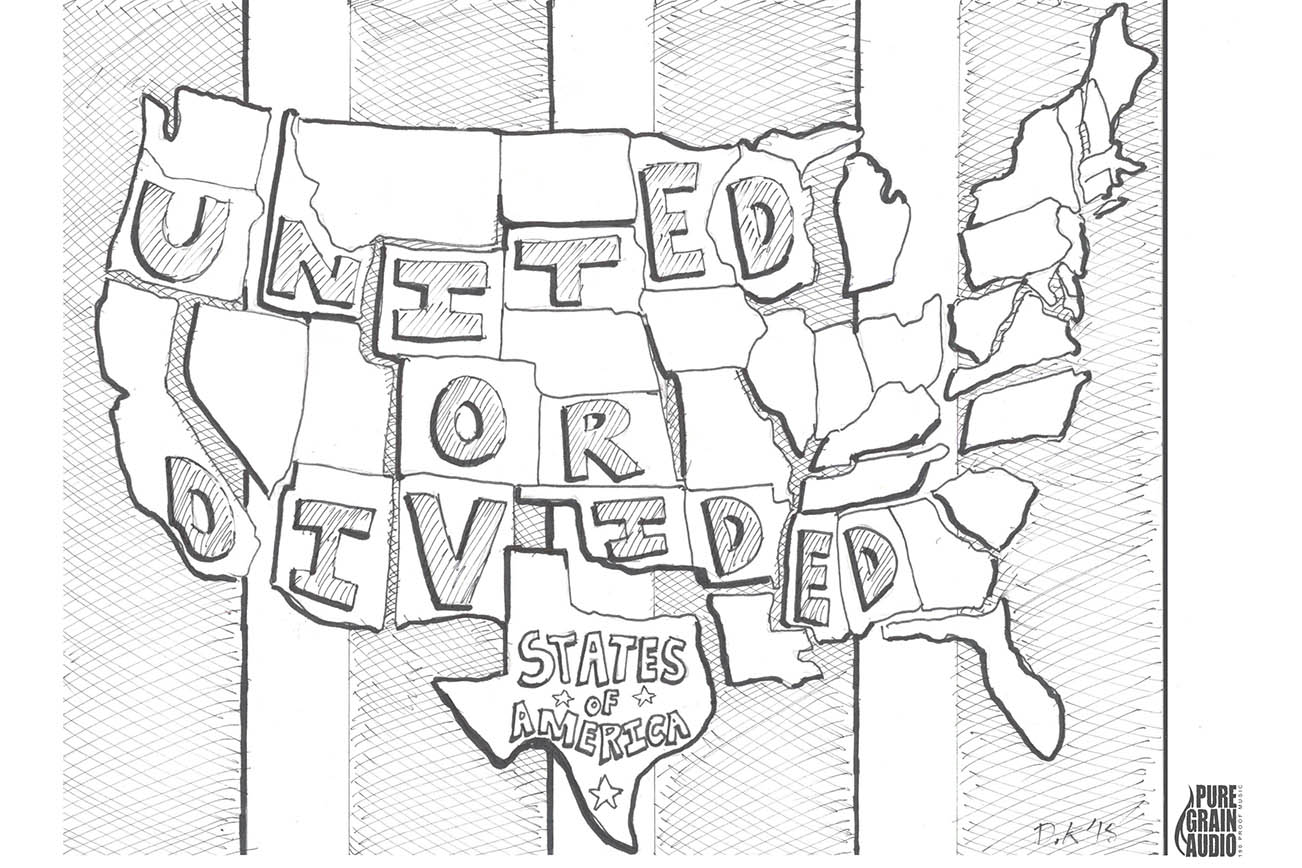 About the Sketch:
– How are you feeling after the midterms? Here is how I feel…. like we are so fucking divided! We are divided right down the middle. It is nothing new. We have been here before. Still, it’s a fact that this is the first time in over 100 years that only one state remains with a mixed legislature. That means every other state now is either blue or red; Democrat or Republican represented. The lines have been drawn (I mean gerrymandered) and the scale is sitting pretty even. So, we’ve been here before, right? Remember the civil war? Half of us were for the abolishment of slavery and half of us against; north versus south? So what the hell are we so divided over now that it is such an even split?

Here is what I know. My extended family is Democrat and a good majority of my wife’s extended family is Republican. I spoke with members of my wife’s family prior to the 2016 presidential election. The ones who were going to vote for Donald Trump came at the issue from different angles. They didn’t trust Hilary Clinton. They wanted an outsider who would “drain the swamp.” They thought since he was good in business that he would be good with the economy. A lot of what I heard was “I don’t even want to vote this time, but if I have to, it’s gonna be Trump.” Now I understand the trust issues with Clinton. All you heard about then (and even now) is FBI investigations of her emails and corruption within the Clinton Foundation. Never mind the mess that became of any of that or that no wrongdoing was ever found. It was all over the news and made me even start to doubt her to some degree.

Ever want to learn how to insult people like Trump? Watch this funny and ridiculous primer on mastering the art of the Trump insult.

The thing is, at the same time, we were seeing Trump saying some very disparaging things about women (in his own words, on video, on Twitter) and while Democrats got even more fired up about him, those who decided to vote for Trump decided to let that shit go. They still do, because either they voted for him to get a specific job done in the White House (economy, immigration reform, etc.) or they maybe talk like him too and also want that specific job done. To that degree, he is delivering on everything that those people voted him into power wanted. He is being tough on immigration, he is claiming responsibility for the recent economic upturn (I don’t buy that he is responsible, but that’s for another story), and he is giving you a daily dose of misogamy and sprinkles of racism with his 4 am tweets.

For any life-long dedicated Republican, Trump might be a tough pill to swallow sometimes, but he is delivering on winning battles the Republicans have waged for years. You can (and should) be offended by his rhetoric, his tweets and his treatment of women. But, here is how I think Republicans can (and are a little bit justified) look at it.

The president doesn’t have to be our moral leader. I think we’ve made that painfully obvious with prior Democratic and Republican presidents.Bill Clinton got a blow job in the oval office (and then lied about it). Nixon had Watergate. JFK had affairs. Reagan denied AIDS was an epidemic. Bush Sr. and Jr. got us into never-ending wars over oil. Obama bailed out Wall Street and never fixed the broken machine (his friends helped create). Trump might want to take top prize with all of those bad behaviors and immoral acts, but he isn’t “recreating the wheel.” For any former “Tea-Party/Nationalist” types, he is the messiah and giving and saying everything they want to see and hear.

Check out the full-resolution version of the PENsive #16 sketch. 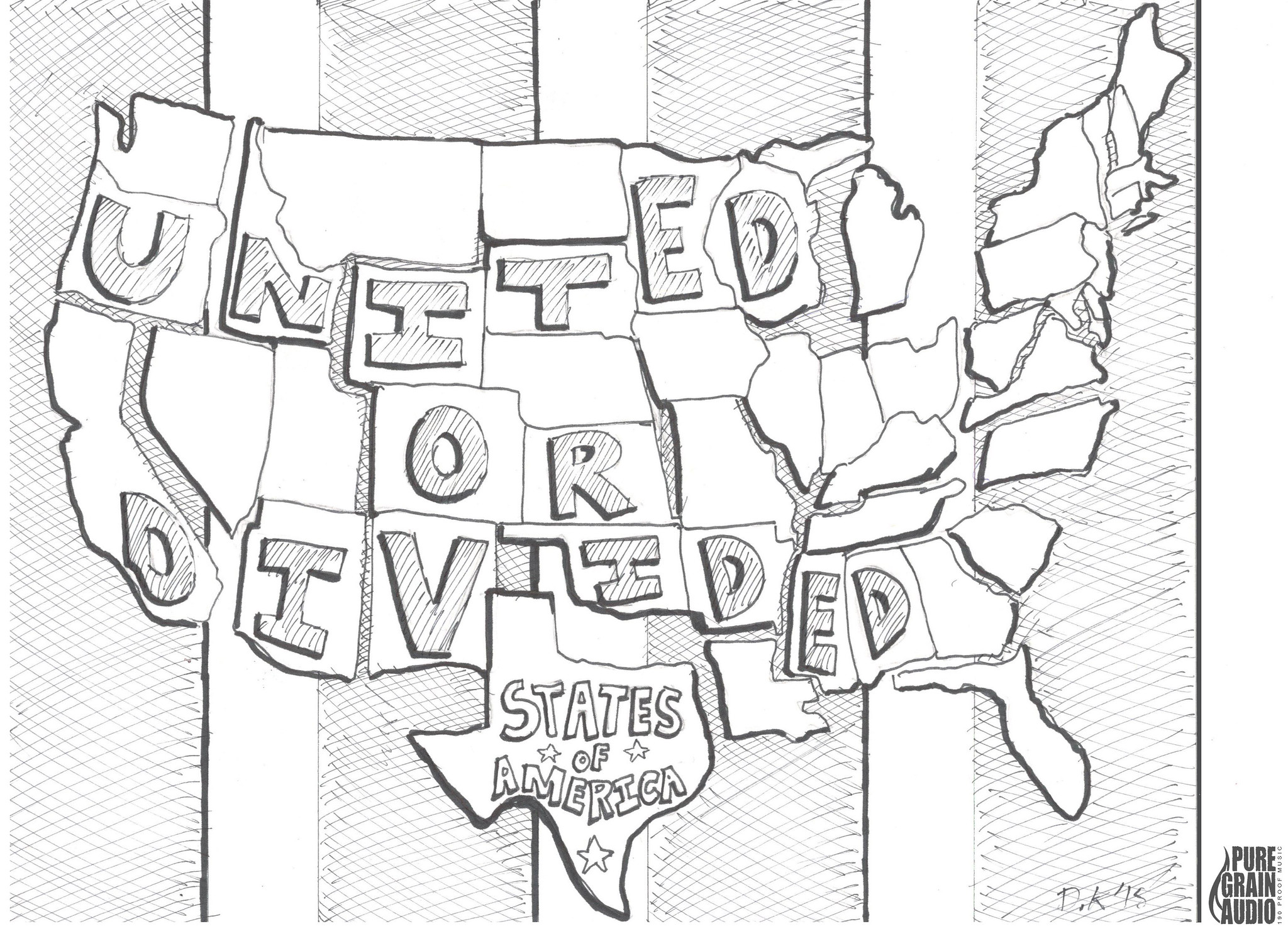 Here is what I don’t know. Can we fix our country and be united again? If we can imagine our country without presidents, politicians, uber-rich and large corporations, then what are we left with? I think we are left with a large swath of people who have more similarities than differences. We all are trying to just live and live the best we can. We all have people we care about (I hope) who we don’t want to get sick or struggle. We all want to make some money and have some comfort. When I talk to people who are on a different political side than I’m on, it’s just crazy how much we really want the same things. We just have a different opinion about how to get those things.

Maybe we need to stop counting on those people with the bullhorn (presidents, politicians, industry titans, media conglomerates) to speak for us and show the moral high ground. Maybe we need to start with the basic lesson we teach our kids when they are in preschool: “Treat someone else the way you want to be treated.” If we start with that, and try to ignore the taunting and the pushing and shoving we see in politics and on the news, maybe we can imagine ourselves united one day.