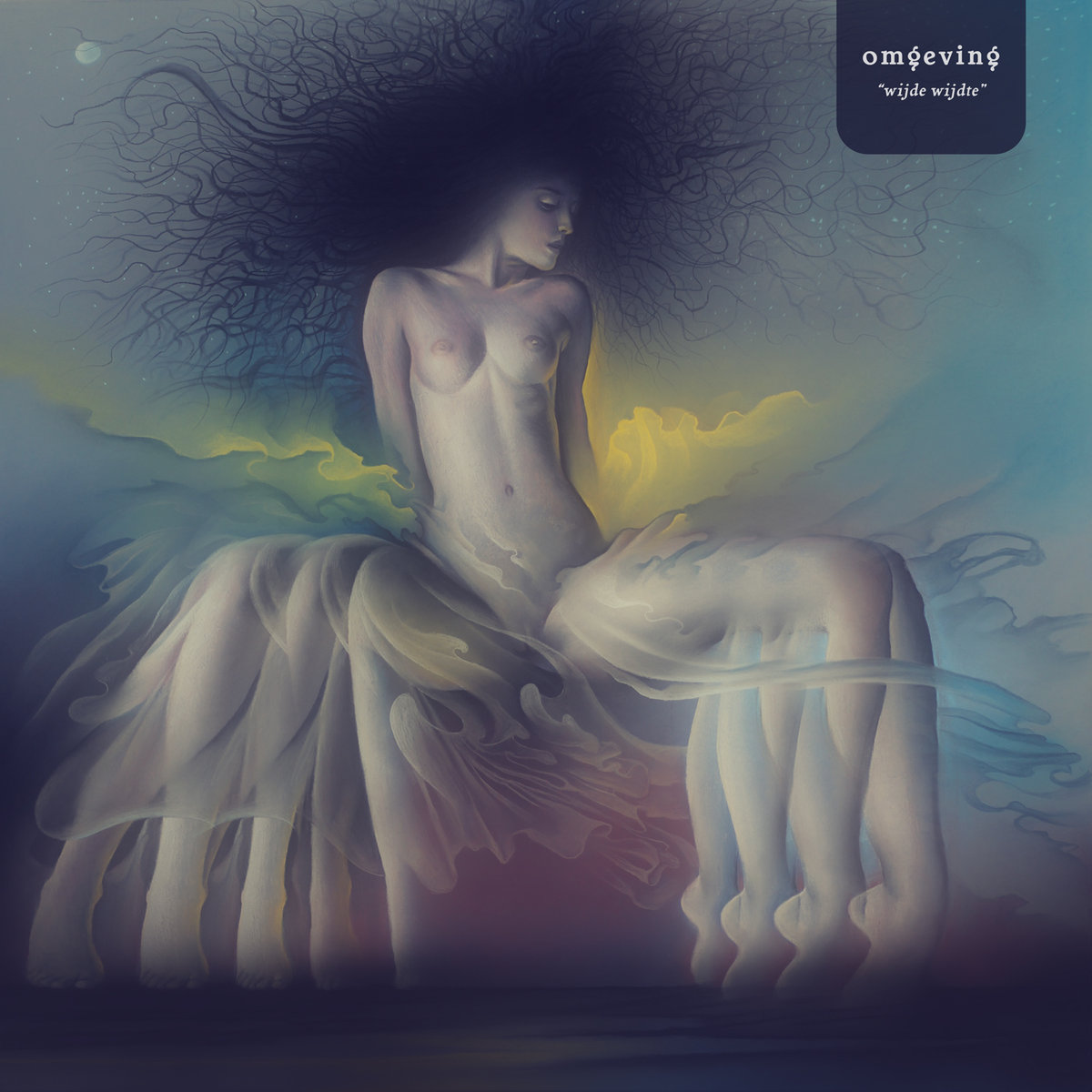 Within metal – particularly the atmospheric side – we’ve seen explorations of space, nature, and all things in between. We’ve seen artists experiment with multiple styles and influences and infusing them with space and the unknown – for instance, Midnight Odyssey and Mesarthim, who focus on cosmic soundscapes in their music. Franck Johanson, a Dutch multi-instrumentalist, has brought forth a new project in this realm – Omgeving. With this project, he intends to send the listener on an astral journey with a focus on complex layering and absorbing music. It’s an interesting turn for Johanson, who has a history playing in thrash outfit Distillator. Omgeving, meanwhile, delves into black metal, doom, ambient sound and post-rock with its debut record, Widje Wijdte.

Omgeving wastes no time in setting the tone for Widje Wijdte with the intro “Ouverture 2015” – ominously transcendent. The initial bass line over a building synthesized overlay and drum pattern grabs your attention, before dropping out and returning with a powerfully hypnotic blend of atmospheric guitar riffs. The repetition of riffs creates an atmosphere that’s present throughout the majority of the record (especially “De Zon Ontmoet de Aarde” with regards to doom), to which it’s safe to say Franck Johanson’s goal to create an immersive soundscape is successful.

The title for each song is apt and fits the mood represented within them well. Despite being a drastically heavier and more complex track than “Ouverture 2015”, “Zwaartekracht Bestaat Hier Niet” (which translates to “Gravity Does Not Exist Here”) has moments in it that feel akin to floating in space. “Daar Waar de Tjid Smelt” (“Where Time Melts”) is another example of Johanson’s attention to detail and perfectly summarizing the song’s feeling in a title, bringing a disturbing introduction reminiscent of Xasthur or Exiled From Light. The slow taps of cymbals over a gloomy riff and synthesizers feel like time is cascading away from you, setting the tone imminently, as it unfurls into an exposition of Johanson’s complex musicianship.

The variation in emotions, atmosphere, and layer complexity in “Daar Waar De Tjid Smet” in particular is what makes Widje Wijdteso striking, and demonstrating that black metal has many applications. This is present throughout the album, with “Stille Vernietiging” being a great illustration of Johanson’s musical diversities. It fluctuates between relatively tranquil post-rock to malevolent black metal passages with ease, which is what makes the record so enticing. As quickly as “Stille Vernietiging” builds in intensity, it settles back down progressively to the same post-rock lull, sending you on a cyclical auditory journey.

Beginning with track seven, “VII – Stille Vernietiging,” why not give the album a spin?

With all this variety, the title track seems to fall slightly flat in comparison to the others on Widje Wijdte, but that doesn’t make it inherently bad. A reverberating tone resonates through the track that’s quite interesting, but not much happens to hold full attention for its duration. While other songs on the record create a truly enveloping atmosphere, it doesn’t have quite the same effect and dulls the immersion somewhat, more of a palette cleanser/filler than a standalone track. The album picks itself back up in “Eenzaamheid in Extase”, however, returning to the same level of developing intensity as “De Zon Ontmoet De Aarde”.

What makes Widje Wijdte stand out is the variation in musical styles explored, from ambient to black metal, to doom, to ominous noise, which makes for an interesting and thought-provoking listen. The songs ebb and flow from start to finish in such a way that you can’t help but feel as if you’re stepping into another realm. It may have minor flaws, but for the start of a project, this is an incredible effort, and a massive sidestep to Franck Johanson’s more recognised history. The ability to stretch songs out without them becoming dull or monotonous is tricky, yet Wijde Wijdte is an entrancing record that avoids the aforementioned pitfall. It’s one of those albums that you can’t just listen to once; it’s meant to be repeated and appreciated differently each time, picking up on the little nuances that make each track different. If this is just the beginning of Omgeving, there is an exciting and promising future ahead.