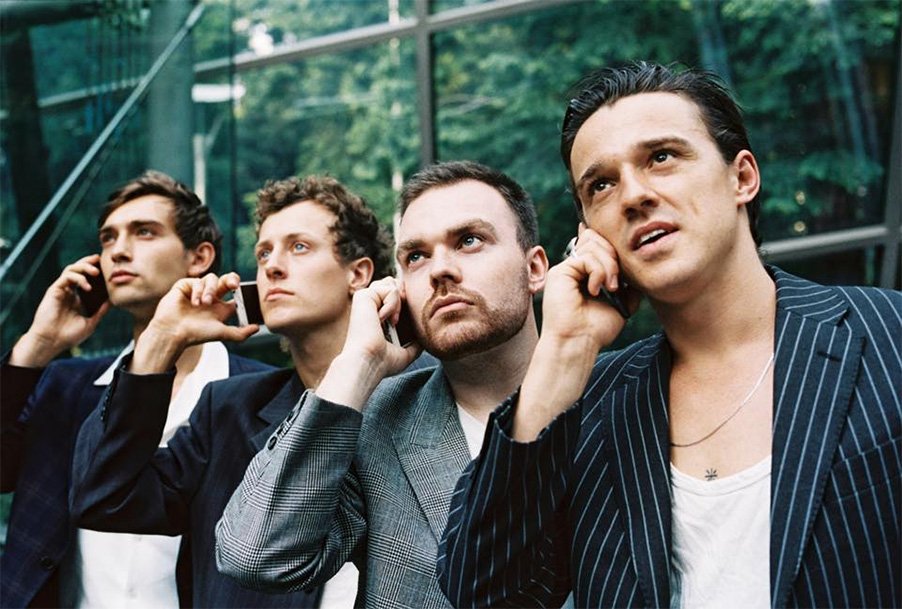 FREE MONEY Interview; Solidarity and the Importance of Staying Positive in 2019

With the state of Britain as it is, the timing of a band like Free Money couldn’t be more perfect. The band make use of “banker persona” alter-egos so, having just put out their new EP via Buff Records/Communion, now seemed like a good time to catch up with the collective to find out how the whole thing came about.

So, we’re nearing the end of 2018, how would you sum up the year for Free Money?
Free Money: It’s felt both really quick and slow at the same time. This time last year we were in a totally different position – we had just written “Moving On” which turned out to be the final single on the EP and marked a real change and progression in our writing. Since then we’ve developed that sound, written the EP, recorded it with Dan, and really developed the whole project, both musically and visually/conceptually. So I guess we’d sum 2018 up as productive – we kinda started to figure out what we wanted to do as a band and got the ball properly rolling.

You’ve just put an EP out, can you tell us a bit about the concept behind the band and your music?
Free Money: Free Money is about positivity really. It’s about keeping your head up when others are bowing theirs. There’s a lot of pretty awful shit going on at the moment, and we’re not suggesting it should be ignored, we’re just trying to offer some sort of an antidote. This theme of positivity in the face of uncertainty runs through the music and informs the way we present the project visually. It’s an attitude that seems to be helping us as individuals too. Maybe we’re just doing it for ourselves? I’m not sure.

One peice written about the band said “Free Money have been adopted as a conceit for an artist-driven music industry, free of influence from The Man and capitalist motives”, what are the challenges you’re finding on a truly DIY label?
Free Money: To be honest there are probably less challenges and less hoops to jump through if you’re working with a DIY label than if you were to be signed to some mega major label that told you what haircut to get and what to say in interviews when it came to questions like this. We have a hand in everything Free Money – we write the music, work in the studio with Dan White to get it across as we’d like, we do our own artwork and co produce our own music videos – and that’s the way we want to do it. So for us our setup is working great at the moment. We’re working with two amazing labels and we really do feel lucky. Buff is like family, we’re mates before the music and their collaboration and input is key to the band. Communion is larger and their experience, advice, connections and bar tabs have been invaluable.

Check out Free Money’s concept in their video for “U Got Me”:

How do you plan on exposing your message to a wider audience or is that even the plan?
Free Money: Yes it’s the plan! Of course! The whole thing is about sharing this message and having a good time. The more the merrier and all that. We just wanna get ourselves out there – touring and releasing music really. And that’s the plan.

You’re also described as being fully committed to your art, what are your thoughts on the growth of the band and the concept going forward?
Free Money: The positive attitude of Free Money will no doubt be a constant but we’re pretty open minded to how we’ll develop musically and conceptually. We’re all visual people too and for us it’s never been just about the music.

If you were offered the chance to give Free Money the complete freedom to achieve everything you wanted to creatively but it meant touring for a week supporting a band whose principals you disagreed with on every level would you do it?
Free Money: Oooft good question… We haven’t found ourselves in that position yet but I think not. Unless you could somehow use the platform to spread your message whilst slightly sabotaging theirs? Maybe that’s a bit sadistic… To be honest, a week of touring isn’t very long and ‘everything you wanted to achieve creativity’ is kinda the dream, so maybe we could suck it up… More realistic than idealistic!

What about new music from the band in the next twelve months?
Free Money: Yes! That’s the plan. We’ve been writing and recording throughout this year so don’t just wanna sit on it. We really wanna get into the studio for an extended period of time to do our first album at some stage, hopefully next year. There’s a different sort of mindset that comes with recording a larger body of work that allows for more freedom and creativity – you can do the pop belters but also go down avenues that aren’t really feasible just on an EP or as singles. Looking forward to seeing where that takes us.

British Music. Looking back over 2018, what are your thoughts on it and which bands/albums really stood out for you over the last twelve months?
Free Money: It’s been a belter actually hasn’t it? The Arctic Monkeys record is great – a really interesting route to have gone down and we love the whole super stylised sound and aesthetic. Idles’ rise has been amazing. Field Music, Blood Orange, Hookworms, Slaves, Yak, the list goes on!

What are your hopes and wishes for Britain in 2019?
Free Money: Oooh gawd don’t even… Umm without getting too much into politics the best thing we can do is stick together and make our collective voice heard. Stay positive but let’s not take too much shit.

Thanks for your time and good luck in 2019, any final words to see off 2018?
Free Money: Solidarity! And bring it awwwn.

Check out “Up In The Sky” from Free Money: