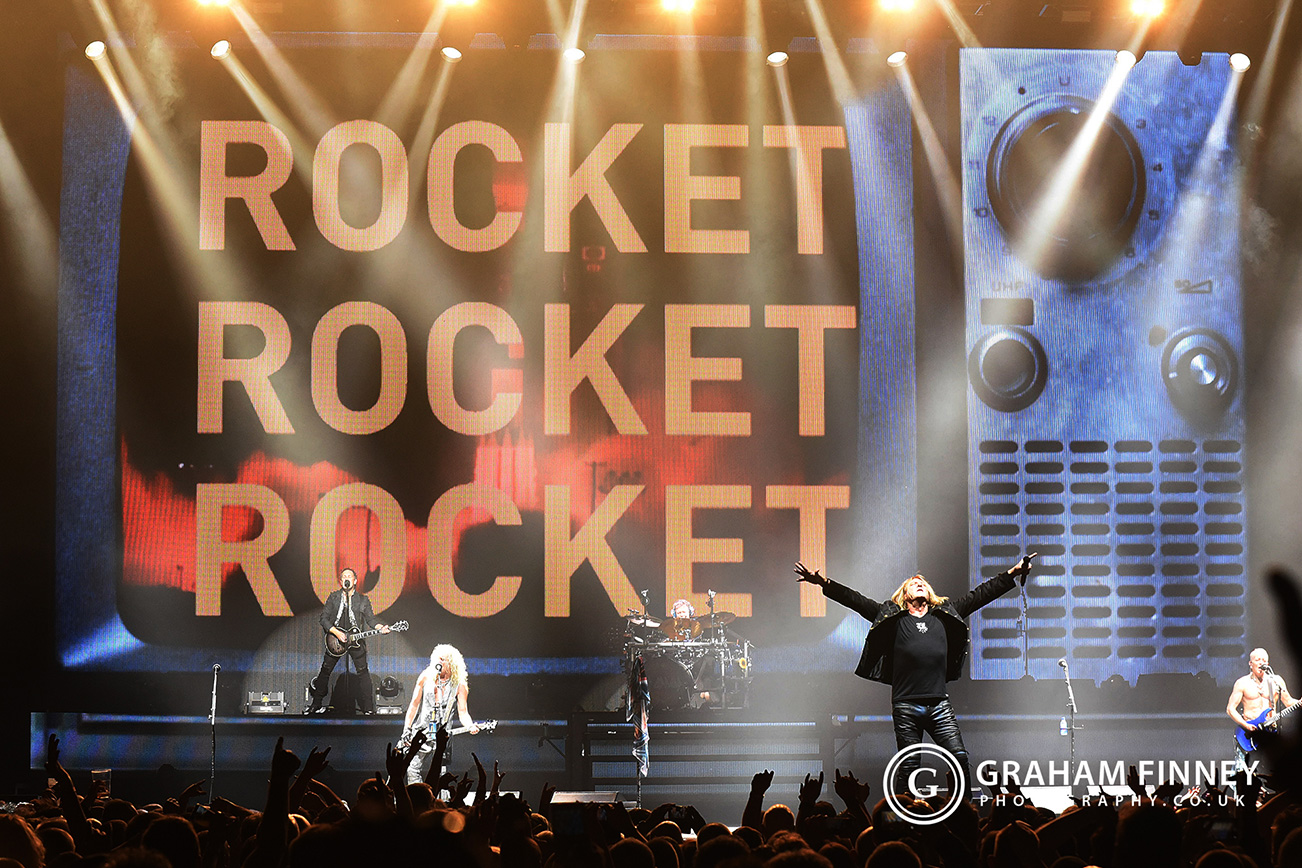 Joining them on the trek are US hard rockers Cheap Trick who do their best to live up to the bravado of their introduction as the “best f***in’ rock band on the planet” with a forty minute set filled with the kind of swagger you only get in bands who’ve spent decades rocking the shit out of venues like this one which is exactly what Rick Neilsen and bandmates do tonight.

Tonight is all about one band though and, in particular, one album Hysteria. It might be billed as a “Best Of” but this is all about that 1987 hit album and from the moment the countdown hits zero and shirtless guitarist Phil Collen is lit up wailing out the intro to “Women”, you just know this is going to be a masterclass in how to put on a hard rock arena show.

See what all the “Hysteria” is about with Def Leppard:

You see, the thing about Hysteria is that it was polished (too much some would say) but it put the band on the world rock map as a household name and, even now, thirty+ years later, the Sheffield rockers don’t put a foot wrong during this immaculate demonstration of classic rock. “Rocket”, “Animal”, “Pour Some Sugar On Me”, as they did back in the ’80s, the hits just keep pouring out from the band with this packed house lapping up every minute of it.

A touching tribute to (the sadly no longer with us) Steve Clarke preludes “Gods Of War” while “Love Bites” was the perfect example of the kind of ’80s rock ballad that peppered the charts during that era. Yes, it’s pure cheese but damn, watching Vivian Campbell calmly rocking out, Joe Elliot pulling all the textbook rockstar poses and Rick Savage strutting about all denim and blonde hair, it’s exactly how we remember it from the first time around.

The spine of the set finishes and the band return to let rip with the kind of encore that puts them in the category marked untouchable with “Let’s Get Rocked”, “When Love And Hate Collide”, “Rock Of Ages” and “Photograph” taking the band racing towards the finish line leaving fans racing out of the doors to make sure that, if they aren’t already, those tickets for the band’s sure to be jaw-dropping appearance at Download Festival 2019 are in the bag.