Death lurks around every corner of the debut full-length by Sweden’s doom rock quartet, Alastor. From the classically morbid cover art and the ghoulish face paint the band’s members slather on to the topics draping each of the album’s seven tracks to the title they slapped on it, Slave to the Grave is the sound of life’s only inevitability being thrust into the spotlight by a combination of progressive ‘70s classic rock and bell-bottoms-informed doom metal.

After scouring underground caves, mausoleums, abandoned castles and darkened watering holes throughout Sweden, we found lead guitarist Lucy Ferian. He’s joined by drummer Levi Athan, guitarist Terry Fying and vocalist/bassist Dharma Gheddon, to give you an idea how comically deep evil runs in these ranks, who rang the death knell and introduced us to his band via email.

As this is your PureGrainAudio debut, can you give a brief history of the band? And when I say brief, I mean brief…
Lucy Ferian: Formed as a three-piece. We were later on joined by our lead guitarist. Recorded our first EP (Black Magic) the same year and things went from there.

Be a “Slave To The Grave” with this title track from the new record.

Given your stage names, it’s hard for those of us who aren’t friends or loved ones of you to know anything about the real you or what your true backgrounds are. So, what are your backgrounds? Do you have a history in playing in other bands in the past or concurrently? Anyone we might have heard of?
Ferian: I suppose we all feel the same around the fact that the more one knows about us as persons, our backgrounds or previous contributions, the less the focus is on the music itself. Therefore, the only thing relevant as for the moment is Alastor. However, I could tell that all or some of the members have previously been active in the Swedish constellation Mora Träsk. There’s one for you!

When putting Alastor together, did you have a particular sonic goal or direction in mind? Was it your intent to play the style you’re playing now, or did you just happen to fall into it?
Ferian: We sure talked some directions through at the beginning, but it all fell short pretty soon. Since all of us are more or less from different places musically, it kind of felt easier to just do what was natural and inspire each other with what we had done before and create something new. I’m not saying we’re re-inventing the wheel here in any way, but I honestly feel like it’s more interesting to get inspired by something completely different than other current music within our genre.

Looking at the promo pictures of the band floating around, it would appear that the theatrical side of your image is an important consideration for you. True? False? In your mind is there a particular presentation or look that goes with the music you play?
Ferian: I wouldn’t say there’s a particular presentation, other than that visuals are about as important as the music itself. If one finds something genuine it’s usually because that something spoke to all of their senses. I guess that’s what we want to create. 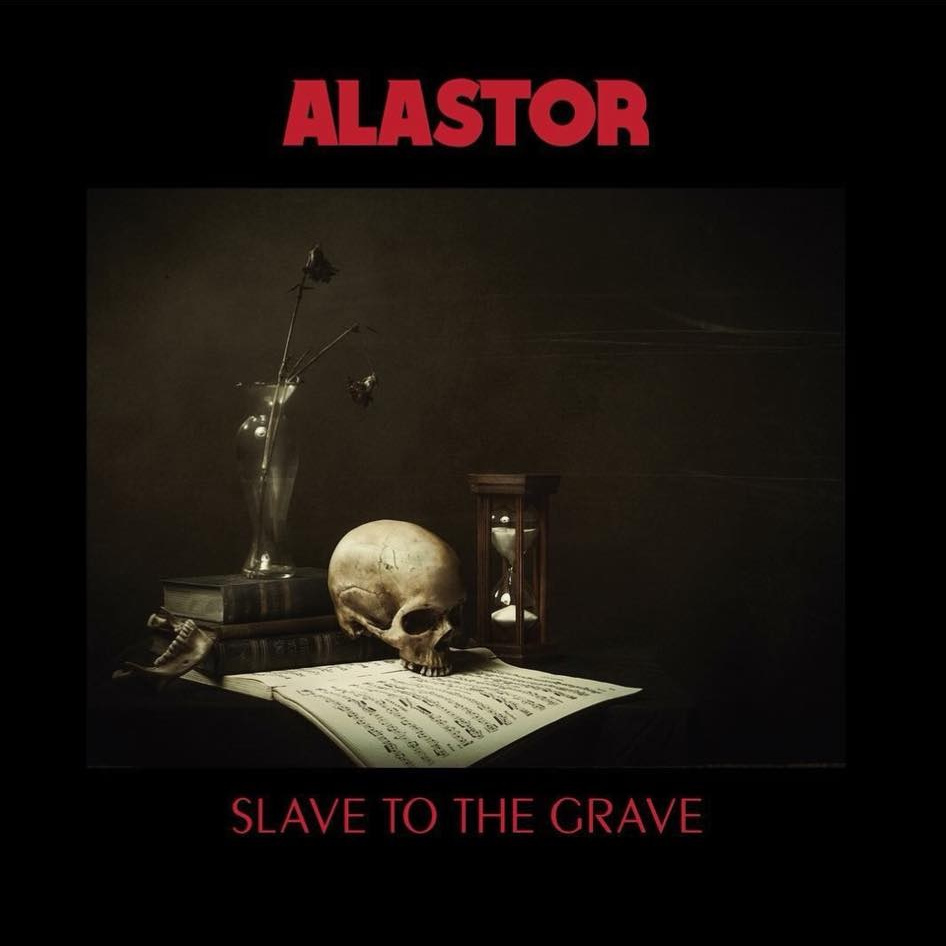 How long did it take to write Slave to the Grave and what would you say were the major motivations that spurred you towards writing this new album?
Ferian: I’d say our main motivation was to create something different than our previously released material. Or at least something different for us to play since the old stuff really wore us out. Some of the new tracks have been with us since before Black Magic (EP, Twin Earth Records 2017) but evolved over time and some we wrote just days before hitting the studio and didn’t even have the time to rehearse them properly. Most of the lyrics were just partially finished and weren’t really completed until the very day we set for recording the vocals. I guess one could say we work hard under pressure.

Was there anything that was done differently in terms of the way the album was written or recorded when compared to what you had done in the past?
Ferian: Yes, in fact the whole set up and recording plan was different than before. Unfortunately, it was really for the worse since there wasn’t much joy in the process. It was stressful, to say the least, and hard on our nerves as well as on our friendship. Obviously, we pulled through and thanks to professional sound engineers, understanding record labels and other cosmic powers, we managed to put out an album we don’t hate.

What is the significance or story behind the album’s title? I understand the concept surrounds death which for many is a very taboo topic, though the one thing everyone and everything has in common. How does the album explore this theme?
Ferian: It sounded cool (laughs). No, but I would say the concept is something that came later on in the process of recording. I remember someone in the band stating the fact that, “every track is more or less about death in some way,” so I suppose it was something that just came naturally. That death has several more sides than the commonly acknowledged, but in whatever way one may see it, it is always ironic; whatever you achieve in life you’re simply a slave to the grave.

At what point did Rising Easy Records come into the picture? Were there any other labels scoping you out?
Ferian: There were some other labels who got in contact with us for a full-length release, which was very flattering, obviously. We got the opportunity of collaborating with Riding Easy Records and we haven’t been sorry since.

Do you have a support plan on the table once the album is out? Have you done much touring/live work? Are you hoping to do more? Possibly get to new places in other parts of the world?
Ferian: There are some plans for the close future, yes. Nothing really written in stone as we speak, but there will be touring. It’s been over a year since our last EU tour and we’ve taken a step back with live shows for a moment to focus on the recording and release of this album, but with all that, as well as new blood in the band, we’re more ready than ever!