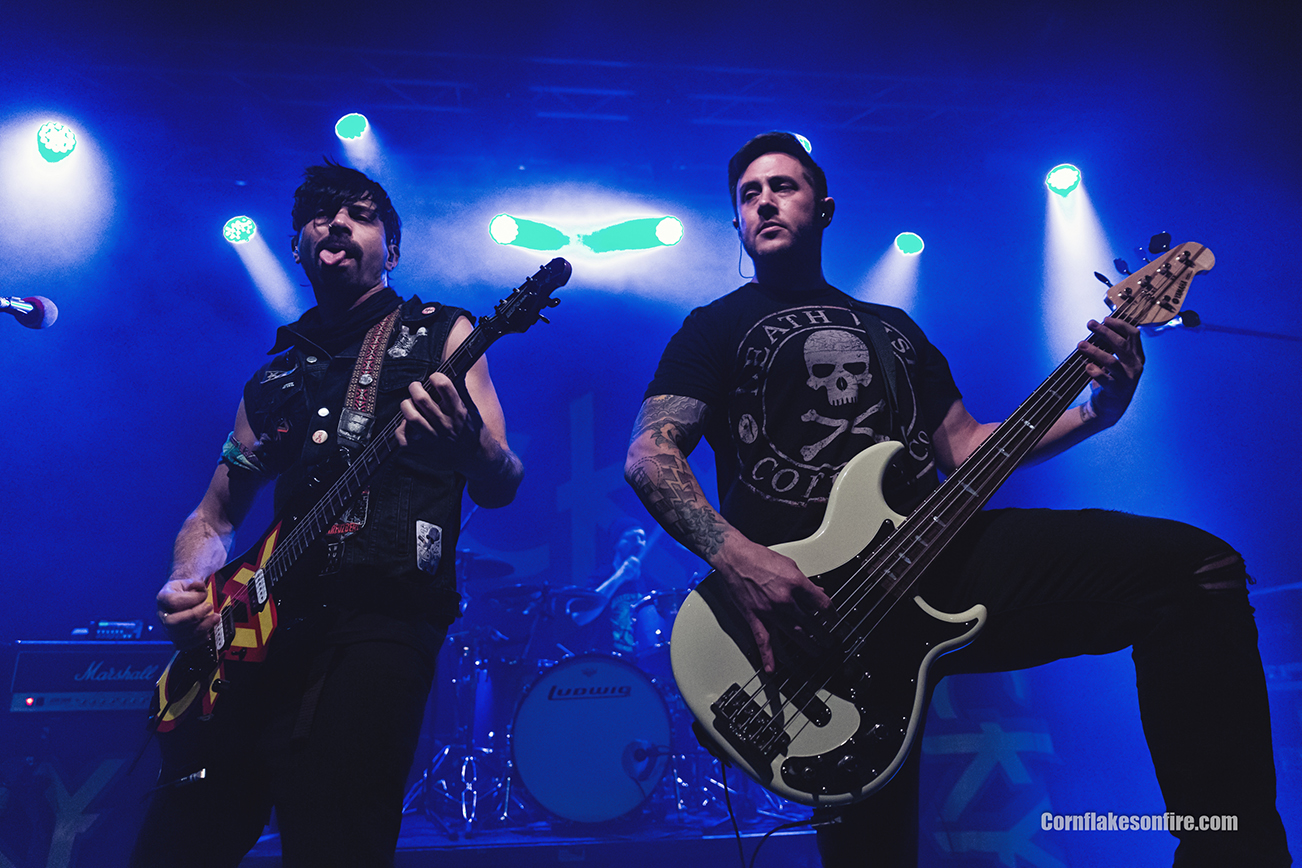 Sumo Cyco fell victim to the less welcoming side of touring life when their van was broken into in Dublin last week. Luckily they were able to continue on this UK and EU run of shows with CKY and they seem to have harnessed the rage that comes with being forcibly relieved of personal belongings and are using it to fuel their high-octane performance. Fierce front-woman Skye Sweetnam leads the charge from atop her improvised podium and is backed by the formidable trio of Matt Drake (guitar), Matt Trozzi (drums) and Oscar Anesetti (bass) who headbang, gurn and shred their way through the entire 40 minute set. It’s a commanding performance, limited only by their minimal space on stage, and shows why this band that operates without a record label is making such a big name for themselves across the globe. One thing to note; their “totally brand new song that we wrote before we came on stage” sounds suspiciously like System Of A Down’s “B.Y.O.B”. In fact, one could almost be led to believe that this is a cover, but we can let them away with this deception after all the stress they’ve suffered recently.

Despite problems in Dublin, Sumo Cyco will remain “Undefeated”:

The antics of Johnny Knoxville and Co. entertained the masses of Gen X and Gen Y via MTV’s Jackass but they also sound tracked a lot of their stunts with then lesser-known artists, especially on this side of the pond, like The Minutemen, Roger Alan Wade, Andrew W.K. and Smut Peddlers. Another of these bands, and one that was influential in the genesis of the Jackass franchise, was Pennsylvania’s own CKY. After a tumultuous few years, the Camp Kill Yourself crew is back as a three piece of Chad I. Ginsburg, Jess Margera and Matt Deis and they seem to have found their mojo again whilst recording 2017’s acclaimed The Phoenix.

After an extended intro of AC/DC’s “Thunderstuck”, the trio take the stage and launch into “Rio Bravo”, arguably one of their best songs. With original frontman Deron Miller no longer with the band, Ginsburg has taken over main vocal duties and he’s not just making up the numbers in this respect. He attacks each line with vigour before peeling off the mic to dig into that dirty riff, and then back to the mic to keep the groove going seemlessly. With only two mobile members it can be hard to keep engaged with a crowd but Ginsburg and bassist Matt Deis spend as much time as possible at the lip of the stage goading the audience, making sure that everyone knows that the band are here for them and not just going through the motions. The Phoenix may have been well received when released in late 2017, but the majority of tonight’s set is culled from CKY’s first two albums; Volume 1 and Infiltrate.Destroy.Rebuild, a fact which I’m sure does not adversely affect anyone’s enjoyment in the slightest. The only downside is that they didn’t fully commit to their cover of GG Allin’s “Bite It You Scum” by getting naked and trying to fight everyone in the room but, hey, there’s always next time.

Check out CKY’s cover of GG Allin track “Bite It You Scum”: