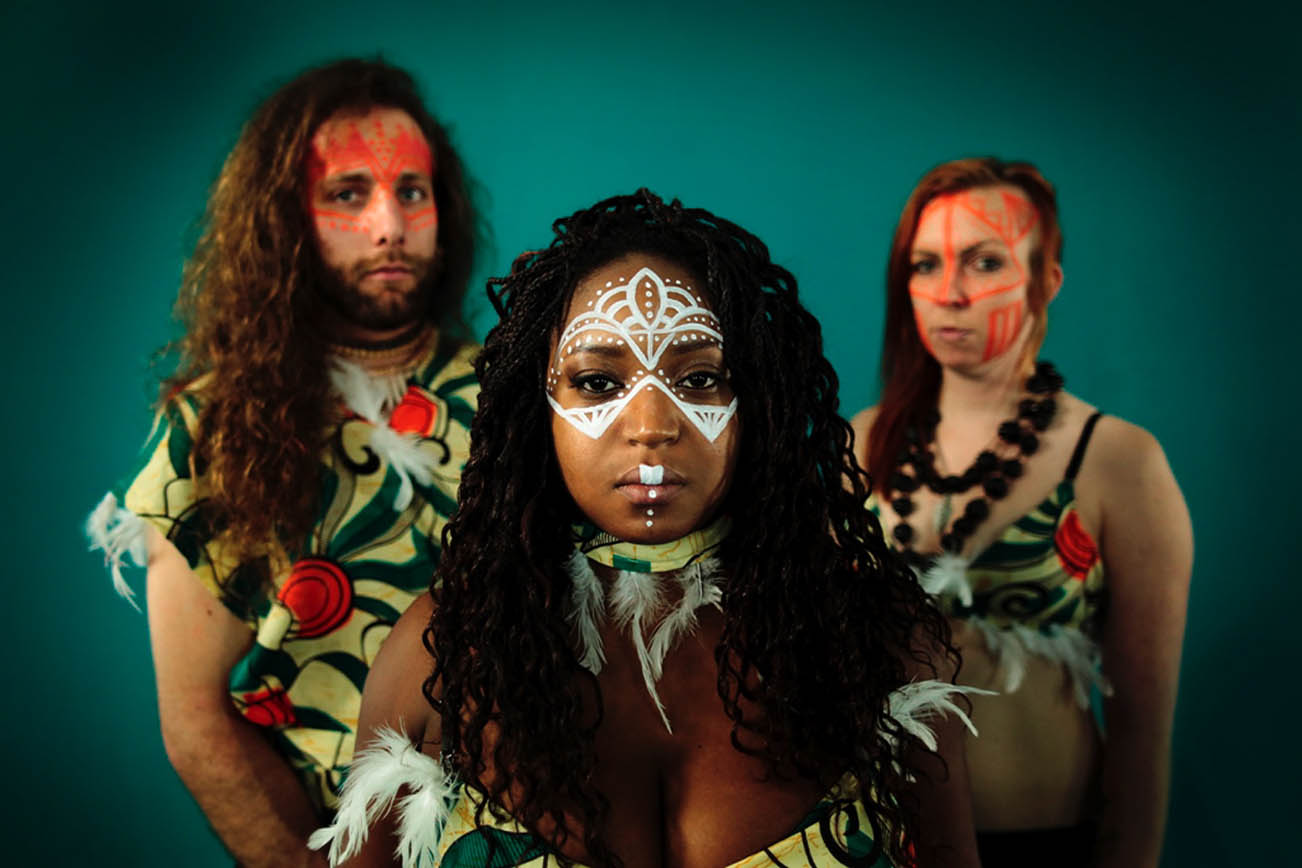 VODUN Interview with Drummer ZEL KAUTE: The World is Only Shit if You Think It Is

If you were told about a band combining the groove of ‘60s soul and ‘70s funk, the corpus moving rhythms of afrobeat, the shimmer of psychedelic rock and the quirky drive of ‘90s alt-metal, your natural inclination would be to prepare for the heretofore unheard. The purveyors of such a melange are London, England’s Vôdûn who last week saw the release of its second full-length, Ascend. Following in the footsteps of debut album, Possession (one that the owner of Riff Rock Records was so enamored by that the label was founded solely to release the record) and appearances at a variety of festivals throughout Ol’ Blighty, Ascend refines the melange of influences.

Other defining factors include New Zealand-born guitarist Lindsay Hamilton not having a bass playing counterpart, the band’s Afro-day-glo warrior image and the X chromosome dominance of their lineup. We caught up with Kaute shortly after an appearance at the Boomtown Festival in Hampshire, UK in which they warmed up the proceedings for the likes of Soulfly, Earth Crisis, Turbowolf and Dead Kennedys for a primer on all things Vôdûn as well as to discuss divergent listening habits, the spirit of renewal and whether or not our ancestors had it better.

Vodun call to “Spirit’s Past” in this music video from Ascend.

Seeing as this is your first time around these parts, can you give a brief history of the band?
Zel Kaute: (Vocalist) Chantal (Brown) and I were in a previous incarnation of the Vodun lineup with a band called Invasion who released our debut album in 2009 and then disbanded. Around 2012, Chan and I came in contact again and started bouncing ideas around for another band in a similar vein, but with a lot more creative freedoms. We met our original guitarist Ollie via some connections at the Underworld venue, and the blueprint for Vodun soon evolved.

I was obsessing over afrobeat and African and Latin rhythms at the time, still am!, so we decided to merge that with Chan’s desire to explore her ancestry and heritage, all to the backdrop of sometimes weird and experimental, sometimes huge riffs. The idea of performing in costume came not long after and I think adds an element to our stage show as well as helping us to feel more connected to our music and thematic ideals.

What does the name of the band mean or refer to?
Kaute: It’s the West African or Haitian way of saying “Voodoo.” We (respectfully) take influence from both the religion itself and the aesthetic.

When putting Vodun together, did you have a particular sonic goal or direction in mind? Were you looking to deliberately do something that stood apart from past projects/bands or did your sound just happen naturally?
Kaute: We were looking to combine afrobeat with heavy music, and I think with Chan’s soulful vocals thrown in, it was naturally going to sound quite different from most other bands. It’s something I think we enjoy too, pushing musical boundaries to try and create a fresh sound. It’s a mix of conscious direction, but also has fallen into place quite naturally the more we have streamlined our concept and ideas.

There seem to be whiffs of everything from Parliament-Funkadelic, King’s X and Bad Brains to PJ Harvey, Mindfunk and Blood Ceremony in your sound. A fair estimation? What do you usually spout off with when someone asks you to describe yourselves?
Kaute: Yep, anything and everything, we all listen to such a vast array of music. Linz is heavy metal, rock and classical. I’m punk and weird experimental pop. Chan is soul, funk, ‘90s and rock with many crossovers for all of us, obviously, with Tony Allen, Die Antwoord, Aretha Franklin, Motorhead, Earth Wind & Fire, System of A Down and Propagandhi to name a tiny handful. 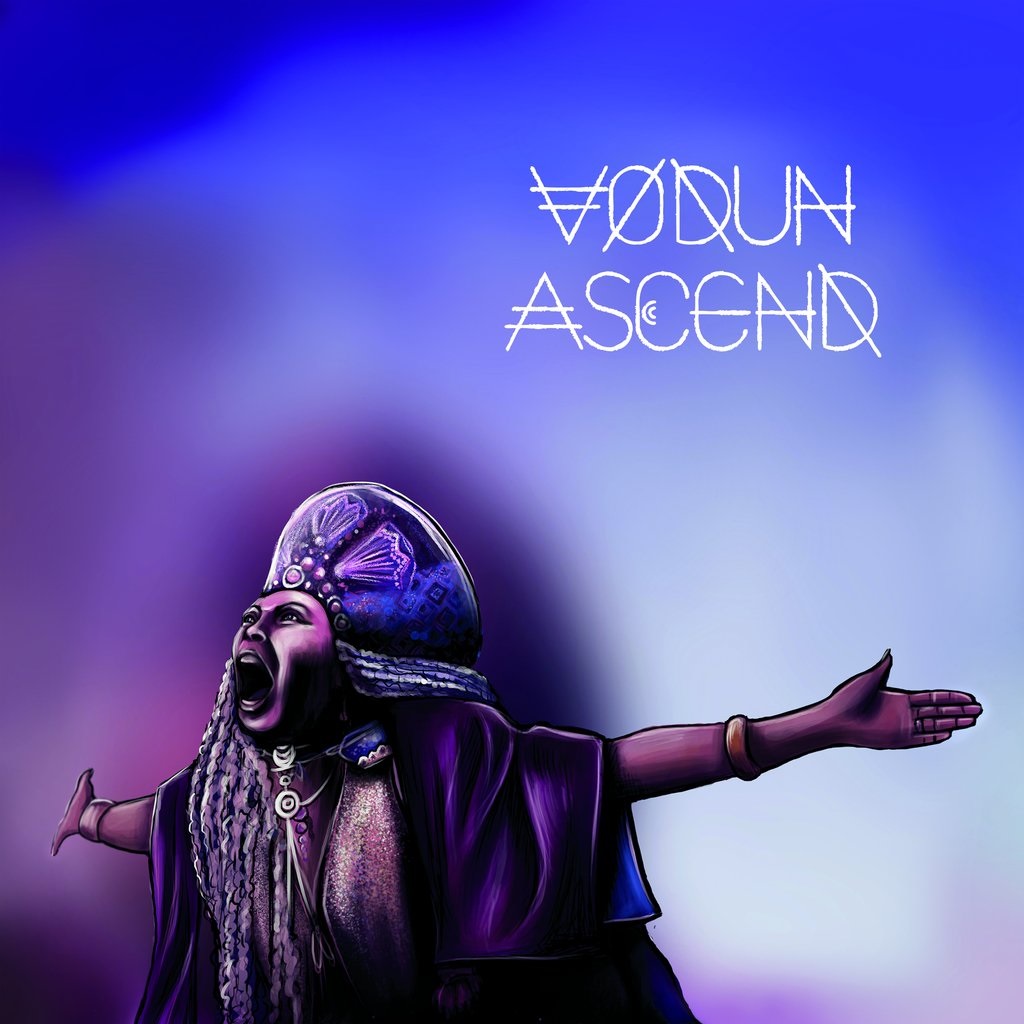 Your image/makeup configuration is reminiscent of the South African band Tribe After Tribe who were probably biggest in the late ‘80s/early ‘90s. Ever heard of ‘em? Was that something decided upon from the start or something that you stumbled onto and fell into? What are its meanings?
Kaute: Never heard of them, but I will check them out. Basically, we love bands like Die Antwoord and wanted to have a weird, spiritual and expressive, character-based side to the band. I remember one of the first shows we played and there was no one there. We made the commitment there and then to always wear the makeup and get into character no matter how many people showed up. It helps us to lose ourselves in the performance.

What are the stories behind Chantal’s Ogoun, Lindsay’s Marassa and your Oya personae/nicknames?
Kaute: Ogoun is a fierce warrior and blacksmith. I channel the aggression of Ogoun into my drumming. The Marassa is signified by twins. Linz plays the guitar but uses an octave pedal to split the signal between a bass amp and guitar amp. Oya is the master of storms; she harnesses the chaos. As the Orisha of change, she brings down the dead wood to make room for the new, using her machete or sword to clear a path for new growth.

What’s your bass player situation?
Kaute: We don’t have one. Linz uses a signal split, as mentioned above.

How long did it take to write Ascend and what would you say were the major motivations that spurred you towards writing this new album?
Kaute: We wrote it over a period of two years. Linz was the new guitarist back then and he wanted to put his stamp on the band rather than playing someone else’s songs. So, he worked hard on his playing to make it fit in with our unique style. I had a bunch of rhythmic ideas that I really wanted to get down into song format, too. So, I think the major motivation was having a creative outlet, first and foremost, and then also a desire to finally achieve a second album for both Chan and me, and a first album for Linz. I think, also, as the political climate worsened, Chan and I realized we had a lot to say about it. There’s always that motivation to put across another perspective from the popular narrative.

Off of Possession, you must check out the video for “Bloodstones”.

Was there anything that was done differently in terms of the way the album was written or recorded that what you had done in the past?
Kaute: The writing process was much more thorough and conscious. I use drum beats from various tribes or regions of Africa and South America, and we spent hours sending songs back and forth for riff inspiration, making sure that the rhythms always locked in together. Then, Chan would come in and change the melody until we were all happy with our creative inputs and the song as a whole. We were more brutal with song parts too; a lot of stuff was discarded or tried out in different variations. Linz and I spent a long, long time in the studio together, come rain or shine, drinking NZ sauv blanc and picking apart ideas and putting them back together, then solidly rehearsing the finished tracks so we could go into the studio and get them recorded live. We put tracked guitars and vocals on after the initial take, but it’s great to capture that “raw” live feel on the recording. Sam Thredder at Cro’s Nest did a great job of that.

What is the significance or story behind the album’s title and how does the cover art apply?
Kaute: The title is a track from the album, but it refers to ascending above the madness that is the current state of the world, and simultaneously ascending to be the highest version of yourself through continual spiritual renewal and conscious feedback of your thoughts and actions. Personally, for us, we had to overcome a lot of issues and worked hard to make sure that this album happened; we’re hoping now to “ascend” to the next level of our career. The music industry is a pretty unsustainable place for anyone to be in 2018.

What are some of the overarching themes presented on Ascend and what do you think is unique about your particular take on the topic(s)?
Kaute: It’s about reconnecting with our past, ancestors, elders, stories and myths, to break free from ignorance and overcome the many tribulations we are facing in this modern age. So much of history suggests that racism, sexism and xenophobia should have already been defeated, yet here we are in 2018 with a new breed of the right wing growing in size and allowing the world to be manipulated by fear and ignorance. We look to the past and rediscover our myths and rituals to learn how to ascend to a brighter future. Our ancestors have much to teach us.

There seems to be an air of positivity to the band/album. How does this go over in the world of underground heavy music which is dominated by the opposite both thematically and with its imagery?
Kaute: A lot of people describe us as being “a breath of fresh air” and I do think we have a much more positive vibe than most other bands in the scene. We try to take from the spiritual, community-led side of Vodun (we like people to feel safe and get involved at our shows), and we also celebrate aspects of humanity that are often overlooked or dismissed like humility, compassion, and empathy. I would hope that is apparent in both our lyrics and our on-and-offstage personas.

On that note, how have you found metal and hard rock fans reactions to the band?
Kaute: Well, to begin with, people seem to just stare, jaws agape. Then, they finally decide whether they are open to something new and either totally get lost in the music and have fun. Or walk away.

Was there anything that you learned from playing live in support of Possession that you applied to either the new album or what you’re going to do in the future in terms of logistics or procedure?
Kaute: Not really. We’ve pushed ourselves even harder with the new album, and Linz and I have a lot more vocal parts to support Chan (as well as more backings and samples to be loaded onto the SPDS). Logistically, even though we love to play live, we’ve learned not to take every single show that comes up. We try to tour at particular times of the year now and starve London, in particular, of live shows so that when we do perform it’s special.

Once the album is fully out what’s the plan? And what are your hopes for Vodun going forward?
Kaute: We tour the UK in September, followed by Europe in October. It’s going to feel very bittersweet touring Europe again with all the Brexit drama going on; who knows if it’s the last time we will be able to facilitate or afford it? After that, we’re optimistically hoping to get further afield. New Zealand would be a great homecoming tour for Linz, and South America is calling too. We also hope to get picked up for some more support slots as our sound is so different, yet accessible, that I think we fit well with a wide scope of bands, and then obviously festival season next year.