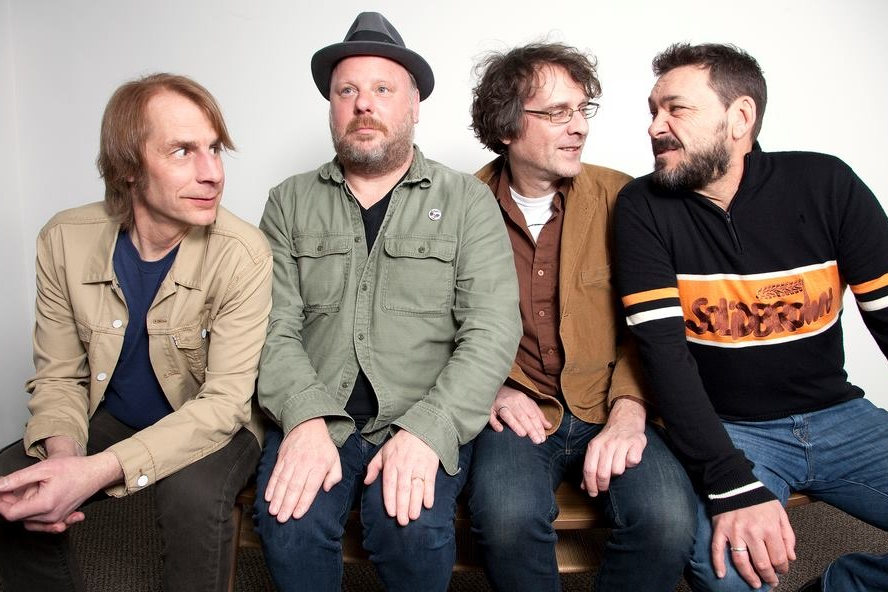 Formed thirty years ago in Seattle after the breakup of Green River, Mudhoney was one of the first bands to sign to Sub Pop Records. While Mudhoney would release a series of major label albums in the 1990s, the group, which consists of singer and guitarist Mark Arm, guitarist Steve Turner, bassist Guy Maddison and drummer Dan Peters, returned to the Sub Pop ranks in 2000, where it remains as of this moment. The latest full-length from Mudhoney is 2018’s Digital Garbage, which will be released on September 28th.

We had the pleasure of speaking with Mark Arm, who also works for Sub Pop as its Warehouse Manager, about Digital Garbage, his band’s participation of the influential 1993 Judgment Night soundtrack, and his long-time hometown of Seattle. A funny, quick-witted, and nice fellow. More on all things Mudhoney can be found online at www.mudhoneysite.com.

Check out the group’s latest track “Kill Yourself Live” here.

What was the creative process like for the track you did with Sir Mix-A-Lot?
Mark Arm: We actually got together with him because he was in town and had a dinner with him and his manager. Then we just sort of came up with the riff, the music we had, then gave it to him. Then he cut it up and arranged it and we went into the studio and did it live with him.

So, you guys were ahead of the curve in terms of home recording…
Arm: It was on a cassette recorder (laughs). It wasn’t high-quality, it was enough for him to get an idea for the parts of the tune, the music we had. I think he was probably able to put it into a computer and cut it up. That was technology beyond our scope at that time. (laughs)

When you were working on the soundtrack, did you have any idea that it was an innovative concept? Or was it more of a “here’s some money to record music for a soundtrack” scenario?
Arm: No, we knew what the idea was. We knew it was being put together by Cypress Hill’s manager. I personally was super-stoked, because I was very very into Cypress Hill and I was like, “maybe we’ll get to do a song with Cypress Hill.” Obviously, Cypress Hill was taken by Sonic Youth and Pearl Jam. (laughs)

Happy Walters, he had this other band he was managing called Funkdoobiest we were supposed to be paired up with… They were out of commission and so we suggested, “why don’t we do something with Sir Mix-A-Lot? He’s in our town.” We’d met Mix once before in Detroit while on tour, we stayed at the hotel. I’m sure he doesn’t remember that because he was surrounded by a bunch of lovely ladies. (laughs)

The Judgment Night soundtrack was released on September 14, 1993, via Immortal Records and Epic Records. 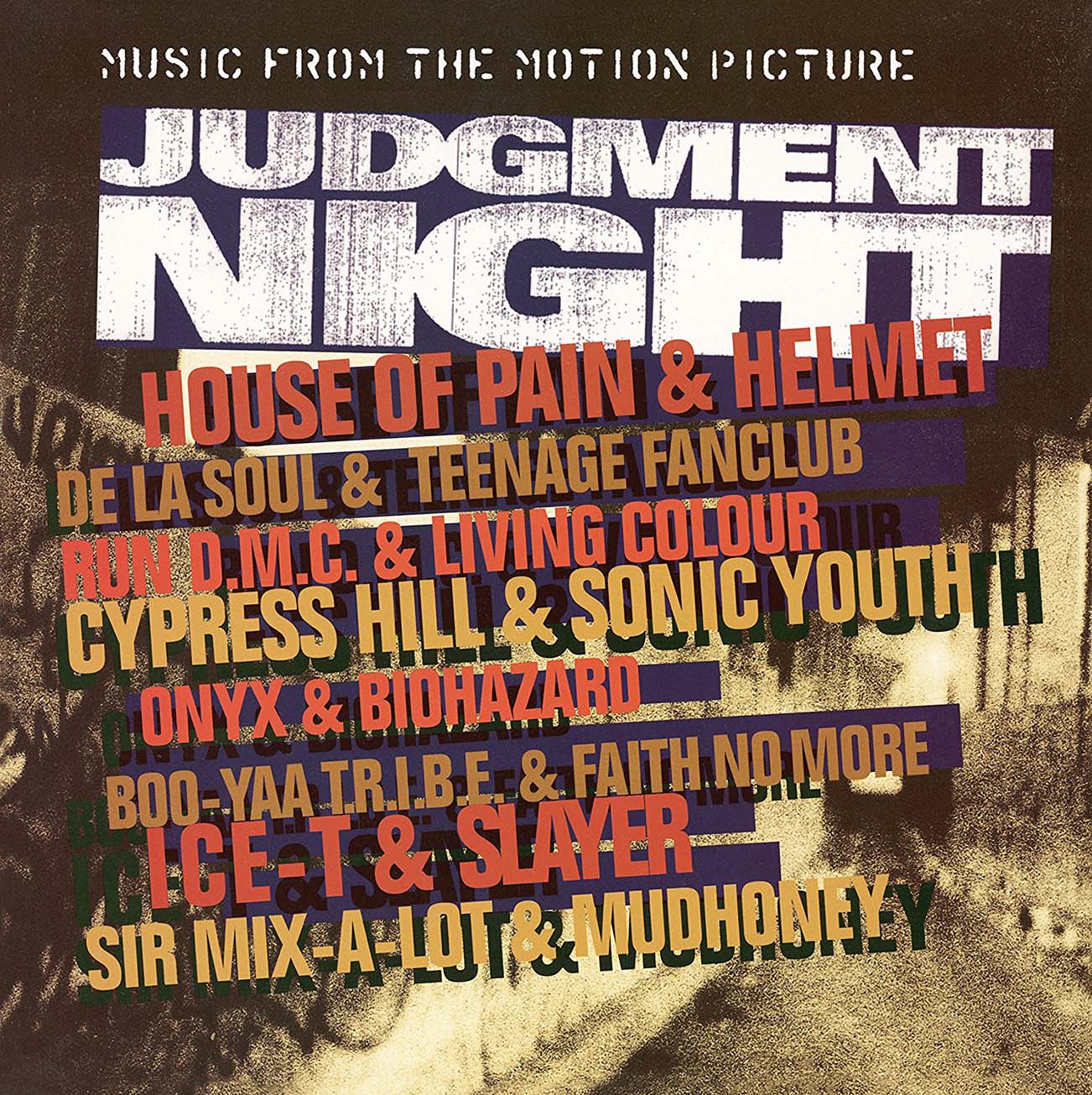 Your collaboration with Sir Mix-A-Lot predated the one he did with The Presidents Of The United States Of America. Was that something you were familiar with?
Arm: I know they did shows together.

Looking back at the Judgment Night soundtrack album and its legacy, is that something you’re proud of?
Arm: The whole album? I enjoy our song only because it sounds like the most organic of all of the songs on there if that makes any sense. It sounds like it was cut live, whereas a lot of the other things were done through the mail.

Did you actually see the movie? If so, what did you think about it?
Arm: We were on tour, we were in Kansas City or something. We had a night off and we saw that the movie was playing. We knew the movie was out, so we found a theater and went. The next day we found out that Cypress Hill was playing in town (that night of the seeing the movie). (laughs) It was like, “crap, we could have seen Cypress Hill. Instead, we saw this somewhat terrible movie.” (laughs)

Do you have a favorite song on the album?
Arm: I don’t.

This is the Mudhoney and Sir Mix-A-Lot jam, “Freakmomma”.

Given your gig as Warehouse Manager at Sub Pop, is it automatic that your albums come out on Sub Pop? Like that you’re the house band?
Arm: (laughs) I guess if anyone’s the house band I guess it’s us because we were there at the beginning and were invited back later. I think Jonathan (Poneman) said something to the band, because our records don’t sell as well as they did in the heyday in the early ‘90s or whenever, like “you can keep putting your records out on Sub Pop, just don’t do too many.” (laughs)

Is that open invite for your side projects as well, or is it exclusive to Mudhoney?
Arm: It seems to be exclusive for Mudhoney. Dan (Peters) plays in a band called The Tripwires with Johnny Sangster and a couple of other people. There hasn’t been an offer made for that band to get on Sub Pop so…

Sorry to bring up that sore spot.
Arm: I don’t know if it’s a sore spot. That guy has a synthesizer projections project, the offer hasn’t been extended to them either. (laughs)

What is it that keeps you loyal to Seattle all these years later? I believe you’ve lived there your whole adult life.
Arm: I’ve been in the area since I was four. It’s my home, it’s where most of my friends live, it’s where my band is. The city has changed in ways that I don’t really dig necessarily, it’s gotten really really expensive. In some ways, I don’t recognize it. The dirt and the grit and the freakiness have been washed away or swept into corners. There are pockets or corners in every city where you can find orange needle caps on the streets, but when I was younger and coming into town, I remember driving through downtown with my parents and on First Avenue my dad would say, “make sure your doors are locked and the windows are rolled up, we’re going down First Avenue.” (laughs)

Digital Garbage will be released on September 28, 2018, via Sub Pop Records. 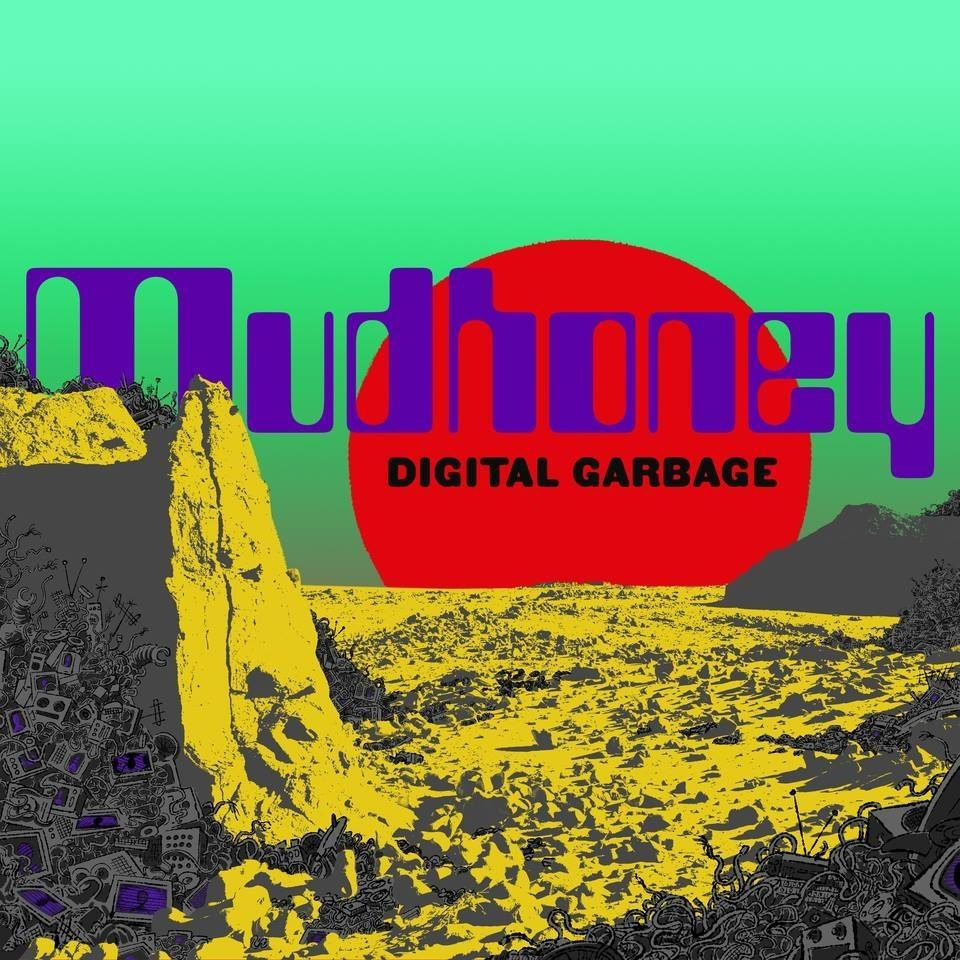 Are there any restaurants you can recommend near where you live or work in Seattle?
Arm: Near the warehouse, here in Georgetown, I would recommend Fonda La Catrina.

What kind of food is that?
Arm: That is Mexican.

When you are on tour, what sort of food does Mudhoney eat?
Arm: (laughs) When we’re on tour, we try to get a buy-out as much as possible, but sometimes, especially in Europe, you play these places that have kitchens, and sometimes you’re at the mercy of what they come up with. Sometimes they are great, sometimes it’s like “man, that was kind of terrible.” (laughs) When we’re on tour, especially overseas, we kind of try to find out what the local cuisine is and eat that. Maybe the exception might be in… Even when we’re in Germany we eat German food, but in Holland, we get Indonesian food or Thai. Indonesia being a former Dutch colony, they have a lot of Indonesian food there. (laughs)

Finally, Mark, any last words for the kids?
Arm: The kids? (laughs) Grow up already! (laughs)

We’ll leave you with another new track from Digital Garbage, this is “Paranoid Core”.