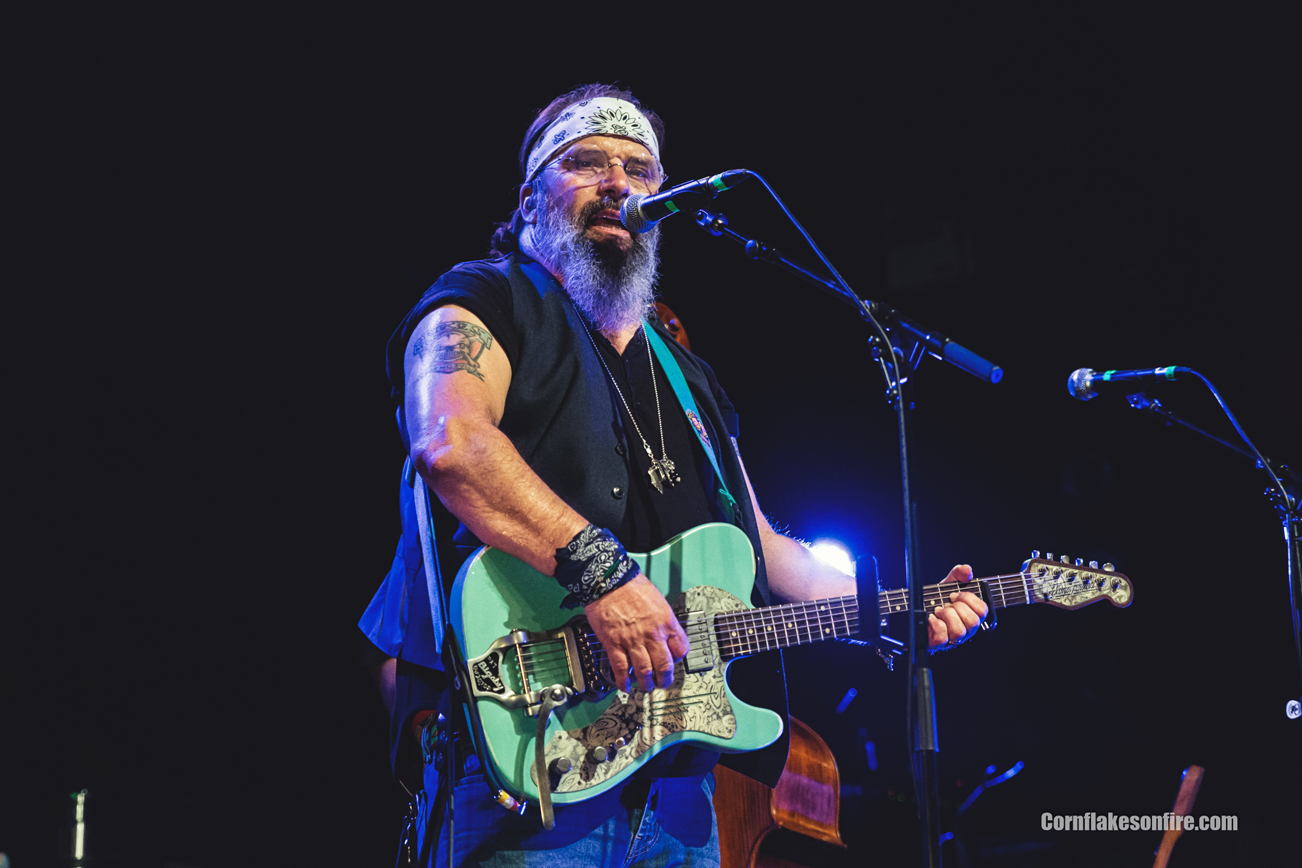 Too rock for country, too country for rock. It’s this inability to be pigeonholed into one genre that has allowed Steve Earle to pick up fans from across every walk of life; from banjo loving bluegrass aficionados to long-hair outsider rockers, there’s something in the Earle oeuvre to tickle your fancy. 2017 saw the release of So You Wanna Be An Outlaw, the critically acclaimed record that saw Steve Earle and The Dukes skew back to a more country sound which also had them enlisting the talents of Willie Nelson and Miranda Lambert to try and find the answer the album title posed. But the more pertinent question for this evening was would they find any outlaws in Manchester?

After an intro track of Johnny Cash’s excellent version of “Rusty Cage”, Earle strides on stage looking every bit the weathered rock star; black shirt, sloppy jeans, multiple bandanas, beard more grey than black. With little fanfare, the band, completed by Brad Pemberton on drums, Chris Masterson on guitar, Eleanor Whitmore on fiddle and keys, Ricky Ray Jackson on pedal steel and long-time Duke Kelley Looney on bass, launch into the title track of their last album and, in fact, the first three songs of the evening follow the order of the album with “Lookin’ for a Woman” and “The Firebreak Line” coming in quick succession. The pre-amble to “The Firebreak Line” also gives us the first taste of the famous Earle monologues, providing insight into the brave actions of firefighters and wondering why they are always called into service to save rich folk’s stuff. Unlike other Steve Earle gigs I’ve been to though, this is not a night for chatting and ruminating on multiple topics as the band have come prepared to play and they blast through a long list of songs.

Check out the video for “So You Wanna Be An Outlaw”

It’s not long before the back catalogue gets mined and a trio of “My Old Friend The Blues”, “Someday” and “Guitar Town” give the audience a chance to have their voices heard. It’s not hard for the crowd to get involved because Earle’s sound engineer has everything mixed just right. There’s a lot going on on stage between twin guitars, drums, fiddle, bass (both electric and double), pedal steel, piano and multiple vocals but everything is crystal clear and at a level that is loud but inoffensive. All of this allows songs like “Taneytown”, “Fixin’ To Die” and the ubiquitous “Copperhead Road” to be delivered with the power and emotion that is central to their message.

The main crux of a Steve Earle show is that you know the man has been there and done it all and the songs he sings are all part of his unique past and personal experiences. Steve’s history and various struggles are well documented, but there’s hope to be gleaned from the fact that one man can go through so much that should have killed him but instead he found a different gear, changed direction and he is still here today for us to live vicariously through. There may not have been too many genuine outlaws in the crowd tonight, but at least we got to witness a true original up on stage and one that is still displaying that creative inspiration and captivating charisma that has kept him relevant for over three decades.