UK rockers Massive Wagons have just released their new album Full Nelson and, to celebrate, fans have painted a massive mural on the wall of the venue of their first ever gig. With all this interest in the band and the album rocketing up the UK rock charts, we sat down with the band to discuss the album, the mural and more importantly, what life is like for the Northern rockers.

Hey guys, how are things going today?
Massive Wagons: Hello! Things are going as well as they can be I think! Thanks for your time.

The new video is just out “Northern Boy”. It’s a tribute to your hometown. What are the top five things that make you proud to be Northern then?
Massive Wagons: I feel it’s more of a tribute to the whole of the North and the working class than just Lancaster. Top 5 things that make me proud to be northern…. Right, 5. Pie, peas n gravy! 4. Family, having everyone so close and connected is great. 3. Graft! No one will shy away from a hard days graft, we have benefited from working relentlessly and damn hard for the last 8 years to build this band from absolutely nothing and that comes from our upbringing. 2. The Lancashire/Yorkshire “banter”, it’s all a laugh and it shows how passionate Northerners are about where they come from! 1. It seems to me that “The North” is seen as the Underdog, which is constantly proven wrong, i go back to my previous mention of graft, nothing much is expected and more often than not the North just gets missed out. I like that, purely because we know we will prove people wrong.

You must have had plenty of good stories growing up in the North, any you’d care to share with us?
Massive Wagons: There’s a few for sure! One that sticks out in my mind, that doesn’t involve me (Bowz) directly is my dad and grandad getting arrested on Blackpool front for trying to sell my uncles paintings. Like Del Boy and Rodney! Grandad pointed at my dad and said they were his and tried getting away. Thinking about it now, it shows what lengths they were going to just make some money! 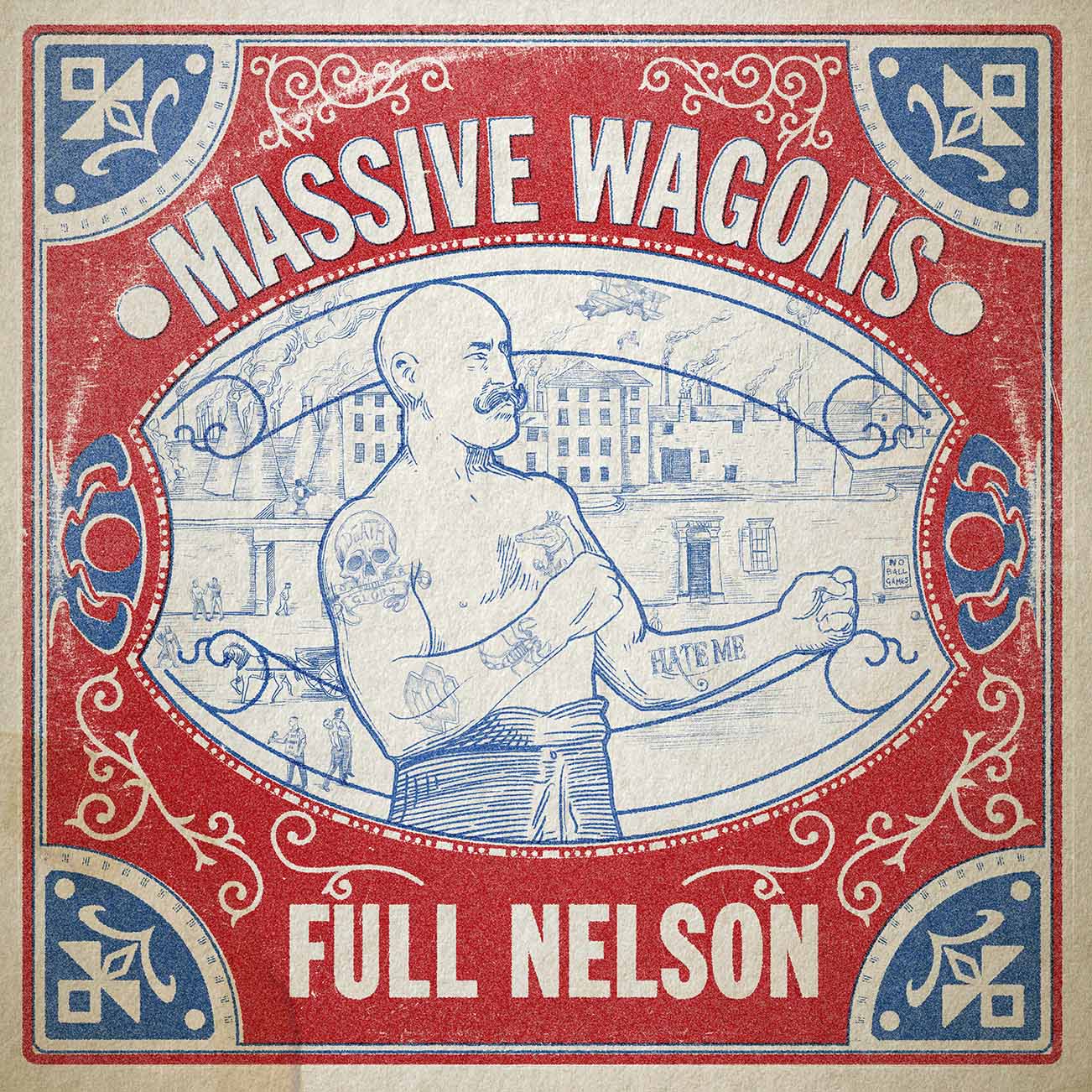 You’re travelling all over the place now but what do you look forward to most about going home?
Massive Wagons: My own bed! Nah, I don’t really know, nothing specific, getting back into routines is always nice. We all work full time jobs and have families, so just getting home is nice!

When Massive Wagons started out, what was it like for a new band in your area and do people treat you differently now you’ve had a bit of success?
Massive Wagons: The Lancaster/Morecambe area music scene has always been brilliant! Brimming with talent, folk, metal, blues, jazz and a plethora of solo artists. When we started out there wasn’t many bands doing the hard/classic rock thing. Which has worked in our favour, we quickly moved on to playing Preston and Manchester and we just kept gaining momentum. I don’t think anyone treats us any differently, 8 years is a long time, but there are people around Lancaster doing this 20+ years! Everyone has a mutual respect. You can goto pretty much any boozer and be blown away by whoever is performing in this town!

“Northern Boy” has seen you divert away from the socially driven direction of the previous tracks you’ve released. Why did you make that shift?
Massive Wagons: While the problem of intolerance, be it race, gender, sexual prefrence has always been bubbling away, do you think that the growth of social media has given people who wouldn’t normally display those tendancies a platform and, if so, do you think enough is being done to prevent it?

It’s not a case of shifting with purpose, the way we write songs comes from what Adam (Thistlethwaite) brings to the table riff wise. When he played us the idea he had for “Northern Boy” you could tell that a barrage against social media, or an attack on the politics just wouldn’t suit. Baz is an absolute wordsmith, we knew straight off that this change of pace would be something special.

Social media is great and it’s terrible, but what can we do? It brings out the best and the worst in humanity. Ultimately it’s the human race that control these things, people use it for good, for bad, to influence, to judge. As Baz sings in “Billy Balloon Head” = “It’s always good to be nice, so let’s be nice to everybody”. Why is it so hard? Don’t be a dick! Simple! Accept people for who they are, just because something is different doesn’t mean it’s bad….

Do you think anything can be done to control, if that’s the right term, the information posted on social media?
Massive Wagons: Probably, yeah. But if I knew what that was I wouldn’t be driving a truck every day! Like said before, social media is good and bad. It’s a platform for people to socialise, it’s up to the individual if they don’t think before they post something up though…

Check out the video for “Northern Boy” here.

Okay, shifting away from that, new album Full Nelson is out, what’s the response been like to it from fans?
Massive Wagons: The response so far is incredible! We have the best fans! We have a community and our biggest fans are like one big family. It’s mad! We love it. We’ve had nothing but praise, everyone seems to have a different favourite track, which is always a great thing!

What are your plans for the rest of 2018 to promote it?
Massive Wagons: Plenty of gigging hopefully! There’s plans in the pipeline and it’s all looking promising! For now we just have to keep supplying people with enough content so you can’t move for Massive Wagons stuff!

I assume a lot of touring will be involved, any mad gigs from up North you can recall?
Massive Wagons: You’ll have to wait and see! Behind the scenes we are working relentlessly with Terri/RPM, Earache and Ben/UTA. As far any mad gigs we can recall… Well last year we hired out Lancaster City Library (cant believe they allowed us to do that) stuck in a stage, 3 bars and 300 fans! That was pretty mad.

You had a mural painted to you on the side of The Pub, how did it feel to see that?
Massive Wagons: It’s crazy! Seeing the pictures on the internet does not do it justice! Standing next to the thing is bloody fantastic!

It’s caused a bit of trouble with the local council, having fans petition though must feel quite satisfying despite the situation?
Massive Wagons: The council approached it in the wrong way. But the reaction following their decision has been nothing but amazing. Lifelong fans, new fans and people that don’t have a clue who we are that just like the “street art” all getting together to sign that petition and save the mural….. Unbelievable! Nothing short of brillant.

What do you remember about the first gig you ever played there?
Massive Wagons: Certainly do! There was a cancellation, a bank holiday Sunday, 3:30pm, our first gig in The Pub, smashed through a load of covers and one or 2 of our own I think! We hadn’t been writing original material that long! Once we finished and packed the gear away, a group of us went for a Chinese and a skinful of beer, then back to The Pub to watch the band that played in the evening!

Thanks for your time, anything else you’d like to say to finish off?
Massive Wagons: Just a massive thank you to Terri and Heidi at RPM, Neil, our roadie, the guys at Earache and of course all our family, friends and fans.