Whether it’s red wine or a work of literature, there’s something endearing about things that age beautifully. Finding someone that ages beautifully with a killer career to match is even rarer. Now, imagine quadrupling down and finding a crew of powerhouse actresses that are arguably bigger than they have been in years and putting them in the same movie? Well, look no further, folks, because Paramount Studios released Book Club to streaming services on August 14th and Blu-ray on August 28th.

If you think this is just another sappy rom-com, think again, because this film features some of the biggest leading ladies Hollywood has ever seen; and they’ll have you howling until it hurts and leave you with a mile-wide smile. Book Club features Jane Fonda, Diane Keaton, Candice Bergen and Mary Steenburgen as four best friends facing some of the biggest challenges life can throw at anyone: making love last, balancing their lives with their flourishing careers, hanging on to their families and each other without forgetting who they are.

These gals have enough Oscars and trophies to host their own award show, not to mention enough star power to leave anyone in the industry blinded, so the cast alone is worth the price of admission. So, what happens? Well, the ladies form a book club as a chance to stay in touch, share what’s happening in their lives, have a few glasses of wine, and really celebrate being together. In an age of blockbusters, it’s incredibly refreshing to see a movie about friendship, aging gracefully and how you’re never too old to fall in love!

Here is the official trailer for Book Club!

PureGrainAudio was lucky enough to sit down with director Bill Holderman and producer Erin Simms, who not only wrote the movie together, but after years of being behind the scenes, are really stepping out on their own. Holderman has a resume that speaks for itself after producing movies with the legendary actor Robert Redford including A Walk in the Woods and Captain America The Winter Soldier. Simms, on the other hand, has made a name for herself as an actress that is focused on production and development, producing films such as Our Souls at Night starring Redford and Jane Fonda.

So, the first question I had was, it’s actually for both of you, is that after I looked through your bios and looked at your IMDb credits, both of you place a really strong emphasis on diversification. Whereas a lot of filmmakers are dying to be niched down into something, like the action guy or the lady who does romantic comedies, or whatnot. I just wondered what drew you to make every new project a challenge? Whether it’s Book Club, or Captain America, or Our Souls At Night or something like that. What draws you to that? To rise to that occasion?
Erin Simms: I think because we both have a background in development, you are very used to looking at a lot of very different ideas. Reading scripts, reading books, reading articles, and trying to just find the next project. So we’re both very open-minded about ideas and we’re both always looking for that spark, you know? It’s not necessarily a genre or a certain demographic, and it just hits you. I read Our Souls At Night and you just know. They say, “You know when you know.” A story just hits you and you know how to tell it, and I think that can come from anywhere. We’re extremely diverse in what we find interesting and the kind of movies that we watch.

Bill Holderman: I think it’s also just a matter of what we can get passionate about. I think for us, both of us, it’s really important that whatever we do and put our names on, is something we sort of fundamentally believe in. I think that’s been a good guiding light so far. But it’s also – you know, look – we like a lot of different things, a lot of different types of movies, and literature, and art, and so that’s reflected.

Yeah, I think so, and it’s got to be very refreshing to never look at the same thing twice or always see something through different eyes, right?
Bill: Yeah. 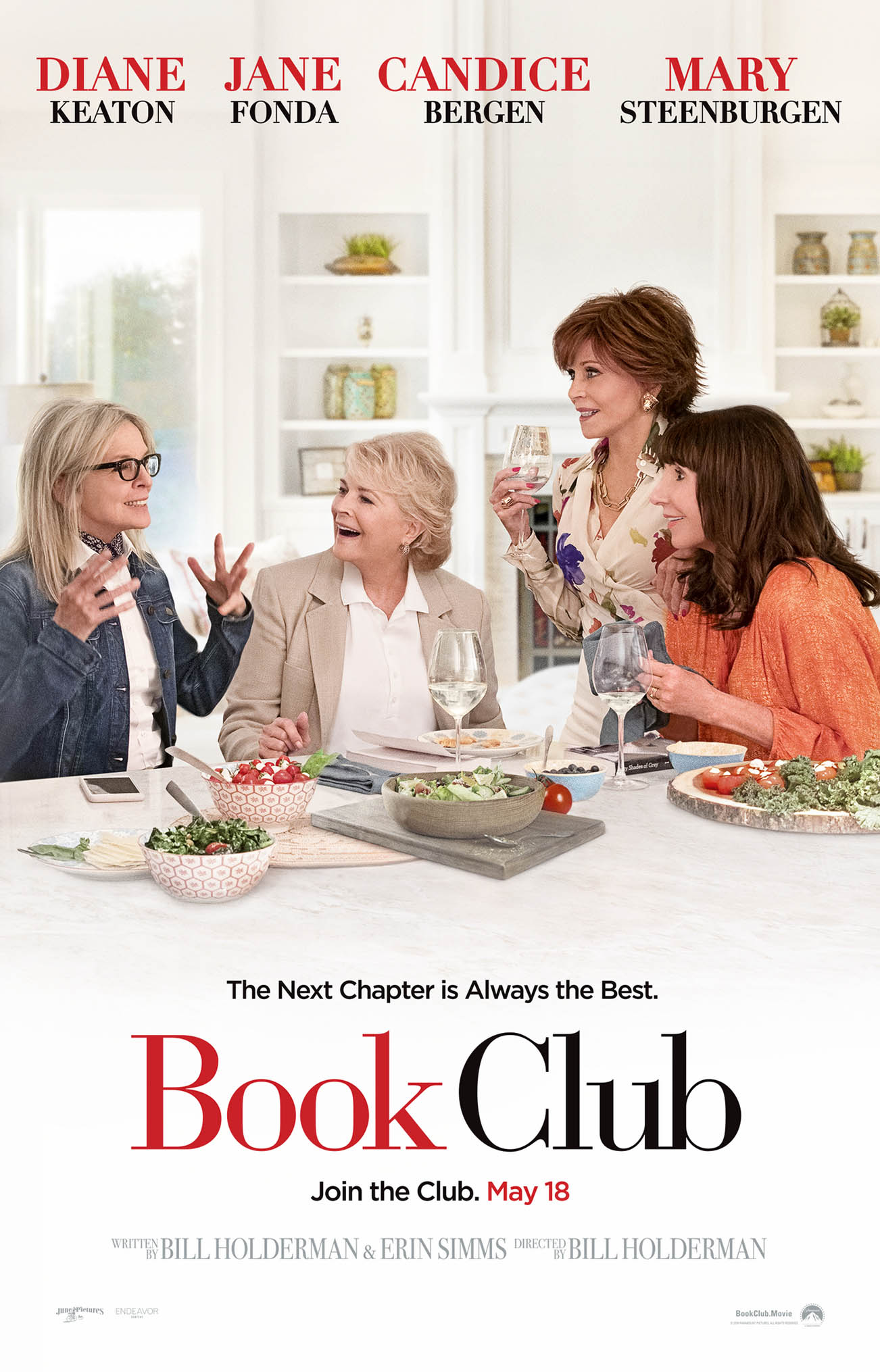 Yeah. Well, the next question I had was, what was the energy like on set with four veteran actresses with so many different skill sets and milestone achievements in their careers and in their lives, all come together like that? It must’ve almost been too much! [Laughs]
Bill: It was like an old Western gunfight. No [laughs], it was amazing. They were so excited to be working together, and it’s sad, but it’s true, but they hadn’t worked together before. They hadn’t been given this type of opportunity, and they, I think, really enjoyed it because they also became genuine friends offset through the making of this movie. You know, they’ve all had the existence of living in the spotlight for decades and decades, and that’s not something that everyone can relate to.

No.
Bill: But you put the four of them together and they can relate to each other’s stories and they can commiserate, and bond, and enjoy, and they did.

Erin: The energy on the set was very electric. I mean Bill was in the thick of it directing and I was with the crew and we’re all like, “How did this happen?” Everyone, down to some of the most experience crew members, knew that this was a special moment and experience. So, I did a lot of crying out of happiness. Just hearing these women saying the words that Bill and I wrote was pretty remarkable.

I’d have to say! It’s crazy too because you look at Jane [Fonda] and Candice [Bergen] and they’re arguably bigger than they have been in ages. Between going back to TV and being hot all over again doing projects with Netflix and all that kind of stuff. With Diane [Keaton] and everyone else, they never really stopped working. So it’s got to be pretty incredible to see that chemistry and dynamic all come together.
Bill: They all bring, and you mentioned it earlier, they all bring a specific skill set and strength. We’re thrilled for Candice, to have Murphy Brown come back is a dream scenario.

Right?
Bill: And what Jane has had on her show [starring in Grace and Frankie on Netflix with Lillie Tomlin and Martin Sheen].

This is (was?) the final official Book Club trailer. Check it out!

The next question I had was, were all of these roles written with these people in mind or was it just some sort of miracle in casting? Where everyone’s schedule just kind of overlapped in all the right ways and it just kind of came together all on its own.
Erin: Well, we wrote the movie for Diane, her name was Diane in the script, and we wrote the movie for Jane, and her name was Jane in the script [which became Vivian]. The Diane thing, we had to have her. I don’t know what would’ve happened. When we wrote the movie originally, she was the first person we were writing for and there was no timing, there was no anything like that. You have to get past their agents, they have to read the script, they have to actually like it, they have to meet with Bill, they have to agree. It’s quite a daunting experience. Once Diane signed on and was excited about Jane that was at least an easier opening conversation to say, “Diane Keaton’s in the movie and we want you in the movie” and blah blah blah.

Not that that makes it easier for somebody to say yes, but at least now you’re having a little bit of an easier time opening the next door. Then I’m not sure how we came to Candice Bergen but I think Bill and I were just racking our brains and when we thought of her it was just like a light bulb. It was one of those a-ha moments. She was just excited to join the crew. Mary [Steenburgen] we had worked with on A Walk in the Woods. We always saw Mary in that role [of Carol]. No matter how crazy they might be behaving, you always feel that sweetness from them and Mary has that in spades. She was the last person on the team and I don’t think that was a hard phone call. “Diane Keaton, Jane Fonda, and Candice Bergen want you to join Book Club.” [Laughs]. That one was probably the fastest yes.

Yeah, I can only imagine what kind of overwhelming compliment that must’ve been to see so many people of that caliber to take such a shine to your material.
Erin: It was pretty crazy.

Bill: Yeah, one of the things that you… When you’re writing in the vacuum, the solitary confinement that writing is, you kind of think about that one day, maybe, hopefully…

Erin: You dream about it.

Bill: …think of them and the fact that they responded positively is inspiring and shocking.

Erin: I can think back to the day that we found out that Diane said yes and it took her about three weeks to read and respond. I could have like a horror moment right now just imagining had that gone differently. Had she said no, or what path this might have taken. It’s a scary existence. [Laughs]

Here’s a “Meeting on a Jet Plane” clip from Book Club.

Well, yeah, but it’s also got to be pretty exhilarating to be sword-fighting the blank page for how many months and then land on your feet like that. And see the project just hit the ground running.
Bill: Yeah. For sure, for sure.

So, as I mentioned in the first question, you guys are never popping out of the same rabbit hole twice, and always moving on to something completely different, what do you see on the horizon for yourselves maybe after a nice long vacation or something like that?
Bill: Yeah, that would be nice. Yeah, right now, we’re actually tackling that question ourselves and trying to figure out what is going to be the next thing. For us, it really comes down to what’s going to inspire us and get us excited. You know, making a movie is a pretty long and hard and arduous process. So for us, we don’t go into it lightly, we really will hopefully find something that we’re inspired by.

Yeah, and ultimately just has to speak to you when you’re going to be that committed to something right?
Bill:Yeah, exactly.

Thank you so much for pencilling me in and that about wraps it up for me. Best of luck with the rest of the press tour and thanks again for the movie.
Bill: Thank you so much! We really appreciate it.

Erin: Thanks so much!