The recent release of the self-titled debut album from Johannesburg-based metal band, Chaos Doctrine, has got the band quite a bit of attention. For metal purists, Chaos Doctrine (order here) represents the epitome of a solid metal album, combining old school thrash and heavy metal with some nu-school elements. And it’s good, it’s solid and it’s brutal. It’s what you would expect from metal musicians who have done a fair amount of time in the local industry. We’re not saying they’re old, but they kind of are, and that’s where we can find metal at its best, rooted in everything that makes metal great, combined with elements that speak of years of experience.

While the band formed in 2010, it was only during 2017 that things began to move for them as they released their debut single “Cult”. Since then, they have piqued our interest with a number of follow-on music videos. What was released last month is an album with strong visual and aural elements speaking to the “chaos” captured in their name. This is what intrigued PureGrainAudio the most and prompted us to speak to the band about everything we could regarding the album.

What does your debut album speak to and speak about?
Chaos Doctrine: Thank you so much for the opportunity to speak to you guys, and for giving us some exposure in Canada! We decided not to name our debut album as the band name really speaks to the main themes found in the music, lyrics, and associated videos. If you had to summarise it, each track is a social commentary on what is wrong in the world – with the lyrics sometimes branching into how we interact with and live in this reality.

You released the album last month – what has been the response so far?
Chaos Doctrine: We can honestly say the response has been overwhelmingly positive. The first review we received was from the legendary magazine Metal Hammer, who had great things to say. Locally and internationally, reviewers are picking up that we are doing something different in our style and approach – and our fan base is slowly growing! Watch this space!

Tell us a bit about your music and the influences that feature.
Chaos Doctrine: The original vision behind Chaos Doctrine, from a musical point of view, was to overlay old school thrash and death with both industrial and more modern metal. The band members listen to a wide variety of bands but we all grew up with Slayer, Pantera, Sepultura, Black Sabbath, Ministry, White Zombie, and the like.

What we find surprising is that different people hear different influences in our songs – ranging from Fear Factory and Testament to a bit of Gojira and Meshuggah, which is great. We are proud of where we come from and who influenced us, but at the same time, we do not want to be labelled as “sounds like X or Y” – we want to sound like Chaos Doctrine.

The album artwork and visual elements are dark, hectic and almost satanic. What are the symbolisms behind it?
Chaos Doctrine: The artwork reflects the themes of the music – dark, dystopic, angry. At the centre is the figure of Michelangelo’s Moses, altered to reflect the chaos and dark mechanisation inherent to our music. He is surrounded by a wasteland – our view of a future resulting from blindly following doctrine. This is finished off by the subtle inclusion of the chaos symbol and the Chaos Doctrine sigil to put our stamp on it. 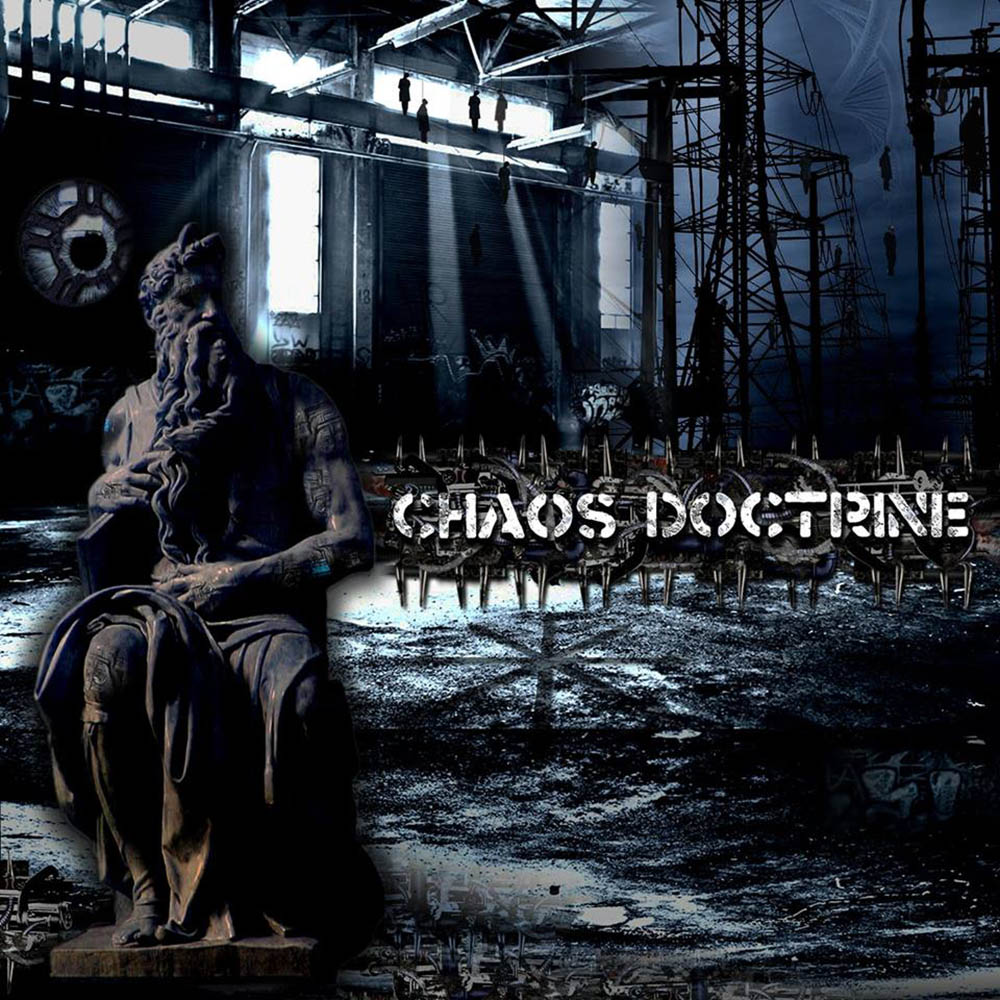 Are these symbolisms things that interest you on other levels besides in your music?
Chaos Doctrine: Most definitely. All of humanity have questions about the meaning of it all, our true origin, and so forth. Every day we are bombarded by both religion and the counter doctrine of atheism and conspiracy theory. In the end, some follow either of these paths like sheep because it is difficult and unpopular to ask questions and “just going with it” makes finding meaning a little bit easier. We all believe in seeking your own personal truth and self expression.

What is about your lives and the world around you fuels your music?
Chaos Doctrine: This is a great question and the answer flows from the previous one. There is obviously the daily frustration that all people have interacting with this world. Wider than that, there is the bigger frustration of seeing that on many levels, the world is broken – and realising that there is not much an individual can do to address that.

All the members of the band have been around for a number of years. What changes have unfolded in the local scene around you, whether good, bad or ugly, that have given you perspective on your own music and the future of your band?
Chaos Doctrine: Our local scene has seemingly suffered a steady decline over the past two decades – not only in Johannesburg where we are based, but also in our other big cities like Cape Town. We see venues close, great bands disappear, and wonder what ever happened to some fans… so we often reminisce about “back in the day”!

At the same time though, We have a few solid venues, we see new great bands make their mark, promoters trying their best to make a difference, and awesome fans that support you throughout. These elements give you hope for our future locally. That having been said, the digital age means that not only do we have access to great bands from all over the world, but we can also land our music internationally!

This is your new “Chaos Doctrine”. Learn it.

There is an interesting trend in the international metal/rock space right now with many older bands, like Alice in Chains, still releasing top 10 singles. Other analysts have been interested to see that less “hardcore” bands, like Ghost, are becoming popular. What do you think this says about metal consumers or the industry?
Chaos Doctrine: The metal industry is an interesting one. You can follow the trends from Sabbath through Maiden, ‘80s glam vs ‘90s grunge, the nu-metal from 2000 to the core bands of today. In the next few years, we will surely see many new trends emerge, and fans will follow that again.

When you choose metal as the music you want to make – especially the more brutal types like thrash and death – you know you are automatically limiting your fan base. The great thing about your fan base, though, is that they are much more committed, I would say, than those following trends. Rob Zombie told Banger Films that he has never met that fan that was into Slayer for one summer – that is a great description. Over and above that, we have to make the music we love!

You have kept your music very classically thrash and death metal. Is this natural or purposive and why?
Chaos Doctrine: We believe that we as band members have to love our music and be proud as hell of it if we are to put something out there and expect others to like it. Earlier we mentioned our vision was to use this old school thrash and death and modernise it with industrial and more modern metal to give it a fresher feel – that way appealing to an audience wider than “just thrash and death fans”. So the design is definitely there – we love the classics and hope we are doing it justice with our approach!

It took about seven years for the band to start heading towards making an album. What took so long?
Chaos Doctrine: Between 2013 and 2017 we changed band members quite a few times – especially drummers – which obviously impacted on our ability to conclude writing and recording. But, the primary reason is that we wanted to put an album out there that we could all stand behind and be proud of. We involved some great people in the final mixing and production of the record, took our time to do the requisite “polishing”, and made sure we landed a product representative of our vision!

The end of the world is the main focus of the music video for “Cult”.

Many bands enter the scene because the members just can’t live their lives without playing metal but they don’t take the band too seriously, especially because there isn’t much money to be made. Metal is obviously in your blood, but can you tell us other reasons why you started Chaos Doctrine.
Chaos Doctrine: As you mentioned earlier, all of us have been in a few bands before Chaos Doctrine. You definitely nailed it on the head – in that time between being in bands, it feels like something is missing in your life. Playing music is more than a hobby, it is an expression of your passion and yourself. The five of us are lucky enough to do that together now. You rightly pointed out that there is not much money to be made – which means all of us have careers outside of Chaos Doctrine. That having been said, we do take this seriously. The result is obviously that timelines tend to be longer to produce the quality music and shows that we feel are required.

Are you happy with the way things are going for the band?
Chaos Doctrine: We are definitely happy with the response to our debut album and our live shows. We gained a few great fans since our first single (“Cult”) was released last year, but in the past month, we have seen our fan base grow dramatically. Hopefully this will continue and we will be able to deliver what our fans want!

What are future plans, or will you just go with the flow?
Chaos Doctrine: Right now, we are focused on getting our album out to as far and wide as is possible – both through live shows and digital channels. In the background, we are finalising an EP containing special edition tracks and writing our next album, all the while looking forward to shows in other parts of our country and perhaps other parts of the world. Chaos Doctrine is here to stay!