Women’s Day, celebrated on August 9th in Johannesburg, South Africa, offered something to look forward to if you couldn’t escape the city and weren’t feeling up to the usual cliches of special picnics or spa treatments. For some of us, a pair of Doc Martens gives us all the lady-feels we need, and nothing can be better than enjoying a good rock show at a favourite venue such as Rumours Rock Lounge. The event of the evening was aptly titles Bangers ‘n Mosh and had a perfect lineup of something old, something borrowed plus something new.

Sadly, being a little late for the start meant missing a band I have been dying to see, Koedoe. Their name alone is intriguing (a play on the name of a local antelope, the Kudu) but more importantly, they come across as being tongue-in-cheek. The rock ‘n’ roll quintet from Johannesburg are fairly new, which means we have plenty of time left to make it up to them – and I’m sure we will.

While I was savagely devouring a plate of deep-fried halloumi, prog rockers Savage Lucy took to the stage in all their technical glory. They are Johannesburg’s answer to instrumental post-rock and definitely a favourite to watch. They delivered their set in their usual wholehearted manner, despite guitarist, Austen Ramsay Lewis on crutches from a recent motorbike accident. It didn’t hold him back from his usual social ruminations, or their impressive on-stage performance. A band with a conscience. We need more of this in South Africa. It must have been something about the music and my face when eating halloumi that got me a sexy nod from a boy walking past. Thanks Savage Lucy and happy Women’s Day to me.

If you have an inkling for some instrumental post-rock, check out Savage Lucy’s “Mid Reverie” visual.

Moving on swiftly, one of my favourite local metal acts took to the stage. Metal musos Riddlebreak are a force to be reckoned with on any good night and this night brought forward one of their most technical sets I’ve ever seen. They’re currently writing new music and the Rumours audience got a full taste of four new tracks, which show a really impressive progression in their music. Despite being without bassist, Roushan van Niekerk, who injured her hand the previous night, they have a great addition to the group in the form of violinist Laura Atkinson. She had been featured in one song previously, but now seems to have become a fixture of the band and we really like the direction it takes them. With more post-rock features to their music, Riddlebreak are a band to pay attention to.

Next up we had old-time favourites, Only Forever. I am a huge fan of their nu-metal/hard rock vibes. Their latest lead guitarist, Wouter Botha, is a great new addition to the band and, together with their fantastic live performance and really crunchy songs, the band gave a solid performance which is only to be expected from seasoned performers. A quick quip from the bassist, Nick Gibbs, about how this would be the last time they played Rumours, piqued my interest. It looks like the future of the band is in question. What can we say, they’ve been stalwarts of the rock scene since 2006 and it would be like removing the jugular vein of the genre. Let’s hope the rumours aren’t true…

An astonishing new-ish duo, DeamHorth who dabble in the math-rock genre, were one of the highlights of an already intense lineup. Despite minimal live performances, DeamHorth have already released an EP and full-length album since their founding in 2017. What can only be described as some serious onstage shredding, this band is explosive. Dean Barreto’s guitar playing is really impressive; it’s impassioned, precise and masterful. We can’t wait to see where this band takes itself. They are definitely a band South Africa has been waiting for. If you don’t believe me, check out their album, Spiritual Serpent.

Metalcore favourites Red Helen were up next, an interesting band to stage just before the headliner, but then it’s easy to forget what command they have of an audience until you look behind you at the raging mosh pit. The crowd came together in their usual fierce support of this act, fired up, limbs moving. This is what Red Helen are renowned for. They have really mastered their genre and there are few bands that get a crowd to move the way they do. More importantly, there are few bands that can get the crowd to feel like they do. I for one, can never not scream their choruses back at them. I would be embarrassed if it wasn’t so exhilarating. The band seemed happy and relaxed that night, perhaps because the vibe was really coming together. I managed to get three high fives from frontman, Brandon Pratt, who is possibly one of the nicest people around. After the warm-up, we couldn’t wait to see Ohgod, up next.

Need a further introduction to DeamHorth? Check out the band’s recently released video for “Dementia!”

Despite a gig the night before, Ohgod from Cape Town, were in their usual good space even if a little tired. We get it; they needed to save themselves for their Oppikoppi set the following night where they had earned one of the best slots of the evening. The crowd thinned a little at this point but there was definitely a hunger in the eyes of the remaining fans. Johannesburg locals only get to see this Cape Town prog act on occasion, which means we always have to make the best of it when we can. And we certainly did our very best to show Ohgod our appreciation. Having gotten to know their music quite well since they released The Great Silence, I settled into the front to enjoy the seismic waves of sound. The thing about Ohgod’s music is that it’s an emotional roller-coaster of sound, with beautiful, clear notes and melodies interspersed with exhilarating breakdowns. It’s really intoxicating to listen to and their music has become an old friend.

It was a warm hug of an ending to a great night of old, borrowed and new and an indication that we can expect some changes coming up in the scene. We know we can expect new music from Riddlebreak, but we are waiting with anticipation for Red Helen and Ohgod to show their colours. Both bands have released truly majestic debut albums and it’s about time they blessed us with more. Just a hint from a fan… The perfect ending to the night was the announcement that Brochella, who had organized this event, is bringing out American electronic hardcore band, I See Stars. It’s going to be emotional. 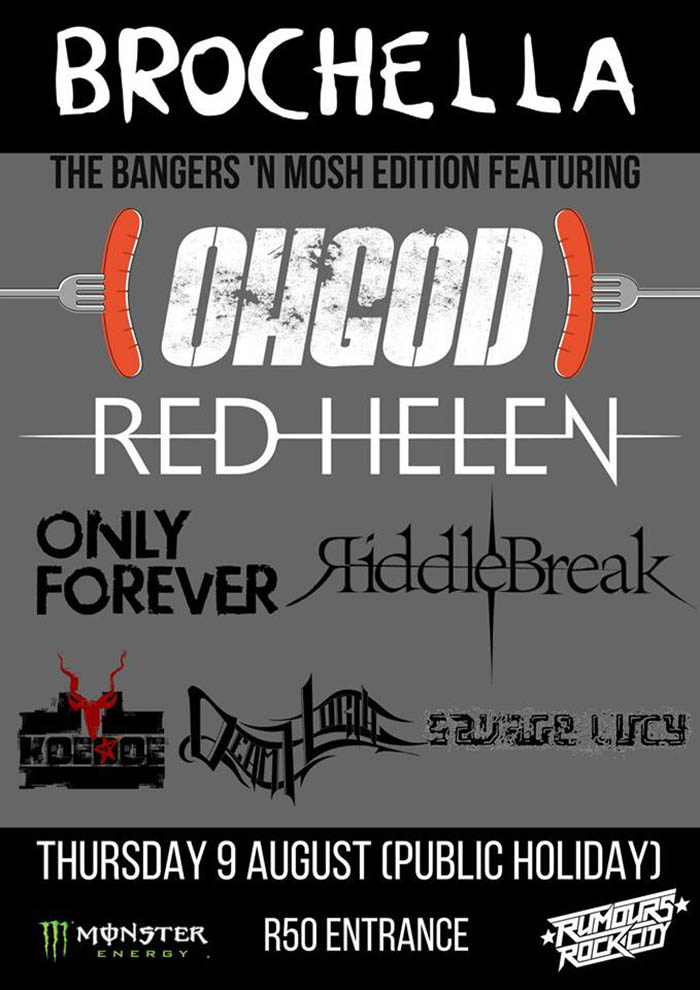