There is something unsettling me as I start my conversation with Aaron Weaver, the drummer of infamous black metal masters Wolves In The Throneroom (WITT). I chalk this up to how we’re communicating: while I’m sitting in a friend’s house in Toronto, Aaron’s speaking to me from his home in Olympia, Washington. The summer has been particularly intense on both coasts, and Aaron tells me he can smell the smoke of wildfires burning all the way from Vancouver. Additionally, all my notes and usual recording process have been wiped out while abroad, meaning I have to improvise.

Still, the thought persists, and I realize that what is arresting my normal flow is the way in which Aaron speaks. It’s rare to talk with someone who is both self-assured and genuine. While he speaks, I try to get rid of an image of forested earth anthropomorphizing into a human face. This image is likely from speaking with someone so at home with nature. Early in the conversation, I ask for his thoughts on communing with forces above us, to which Aaron clarifies, “Nature is not above us. The ancestors are not above us. The gods are not above us. They’re woven through us, and it’s the energy that sustains the whole universe.” Small wonder the image of nature’s faces, roiling in flame and smoke, contrived from earth and soil, keep coming to mind. I ask how his reflection on nature works.

Check out the band’s video for the single “Born From The Serpent’s Eye.”

Conversing with the earth, he explains, isn’t what people think it is. “It’s a matter of listening, really. The way I understand our music and the way I understand my spirituality (if you want to call it that) is just a matter of listening. Shutting up for a moment, going to the woods and being there quietly, and listening to the voices of the landscape. Not trying to bring any judgment to it, not trying to control it, not trying to make it part of some human paradigm.”

I ask how this resulted in an album like Celestite, and how this changed again going into their last release; it’s a convoluted question, and I fear may be like the rest of my improvised questions, but Aaron is patient with me, exuding a calm self-assurance that is at once confident and sanguine.

“We’ve been going so hard as a band for so many years, with just the process, the cycle, of recording and touring. And it felt very appropriate to push ourselves and to try something new and try something challenging. That record was intended as an experiment, and as a way to further develop our recording studio. It’s experimental in the true sense: we were literally running experiments in order to push audio through the wires, and make music here so that we could make the album that became “Thrice Woven”. Because we knew that there was another metal record that would emerge, and we knew that we wanted to record it at home in our studio which is here in the woods. So we can be among the trees, and walk down to the saltwater, and hear the voices of the animals, and be among them.”

The album Thrice Woven was released on September 22nd, 2017, via Artemisia Records. 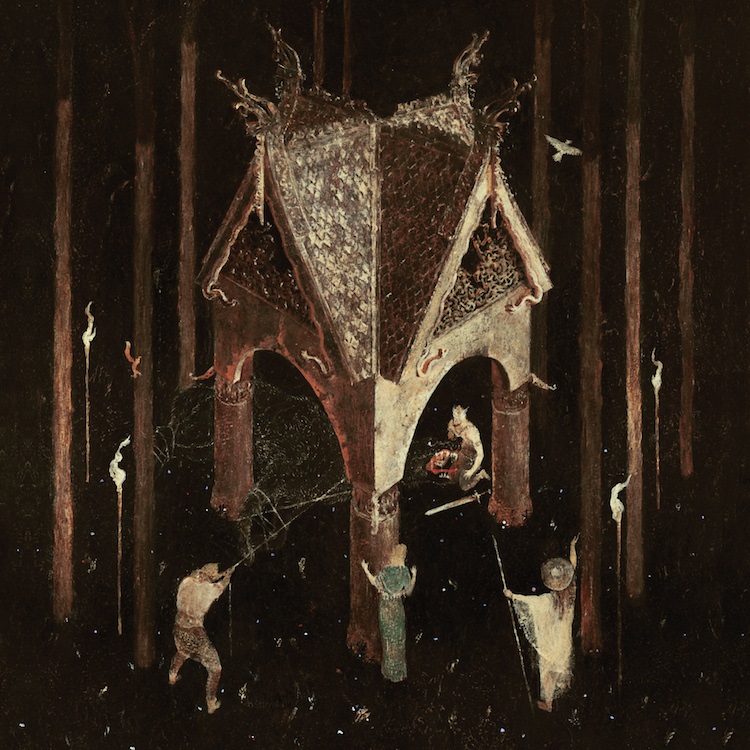 WITT released their latest album Thrice Woven last year and finished several crushing tours through North America and Europe between November and only properly letting up last month. It’s a feat becoming of a band who have spanned an impressive career for the last fifteen years, helping foster the new wave of American black metal. What stood out from those shows for Aaron was one venue in particular in Austria. “The greatest show was at this place called Neudegg Alm, which is in the mountains near Salzburg, I think the nearest town is called Abtenau. And we have a friend there whose name is Barth Resch, and I just consider him to be one of the greatest living earth artists alive right now… he does these amazing rituals in a very ‘noble heathen’ tradition and incorporates music and art. It’s an amazing venue and an amazing place. Being up in those mountains in Austria, it’s always a good time.”

Thrice Woven was arguably one of the band’s most explosive to date, and received support from the likes of Steve Von Till of Neurosis fame in the form of spoken word on “The Old Ones Are With Us.” When I ask about his favourite memory from recording Thrice Woven, he explains, “Tracking the drums was my favourite moment. It was a hot July day, right after the summer solstice, and we tracked drums in Seattle in a really cool studio called Litho that one of the guys in Pearl Jam owns… It was just a magical day, I remember it was a hot day, and there was a south-facing brick wall, covered in vines, and these vines were covered in bees that were collecting pollen. The whole building was vibrating with the sunlight and the humming of these bees.”

If you’ve never heard Thrice Woven, we suggest you get on it.

When I ask if he is as much at peace on stage as when he was recording, he clarifies this isn’t the case. “This music is not peaceful at all. It’s oftentimes very wrenching and emotionally fraught. It’s scary to do sometimes. It comes and goes. Sometimes it’s blissful, but other times it’s not, just like life.”

One thing is for sure, WITT will be disturbing the peace along with Behemoth and At The Gates this fall, starting in October. They will be embarking on a tour of the U.S., Canada, and Europe for what will likely be one of the most brutal sonic experiences this side of the decade. And Aaron and Wolves will be looking to record shortly thereafter as he revealed to me afterwards.

When I ask how he manages to make this all work, how this all meshes with his own personal experiences, he responds, “Metal, more than any other genre, is a shared ritual with the audience and the band. Maybe this is true for any kind of music, but I’m a metalhead at heart. With this kind of music, I feel this kind of merging with the audience, and the beauty and the love that is conjured in that experience.” I thank him for his time, and sound off, feeling like I’ve accomplished my own little ritual, in speaking with a man who can make you feel confident in the truth of the deeper secrets of the universe.

Speaking of the hum of a swarm of angry bees, check out the track “Angrboda”.