Monday nights are jumping once again on West Hollywood’s Sunset Strip, largely in part to a band called Royal Distortion. After a short residency at The Viper Room earlier in the year, Royal Distortion eventually moved their gig a short walk down Sunset Boulevard to the storied Whisky a Go Go. The Monday night residency has given them the platform to showcase their recently-released, self-titled EP, along with an abundance of new material yet-to-be released.

The Los Angeles-based alternative rock group was formed in 2018 by Greek singer IQueen and Greek guitarist Pyn Doll, the two founding members of the internationally-acclaimed punk band Barb Wire Dolls. With bassist Gabe Maska and drummer Kevin Tylor in the fold, Royal Distortion melds elements of late ‘70s and ‘80s new wave/first wave alternative with catchy pop-rock sensibilities. Their onstage energy is infectious; in their frenetic-punker Barb Wire Dolls incarnation, IQueen and Pyn Doll performed for audiences numbering in the tens of thousands. These days, to watch them perform a one-hour set at The Whisky is in stark contrast to the Wacken Open Air festival, yet in that small venue, which holds about 500, there exists an atmosphere unparalleled in a bigger venue.

Some live footage of the group performing “Kind Of Crazy” live at Whisky A Go-Go.

“It’s something we’ve been wanting to do for a while, me and Pyn,” IQueen says, “because we were writing a lot of songs that just didn’t work with Barb Wire Dolls. It’s frustrating as an artist, because you don’t want to be pigeon-holed into any type of genre. You don’t want to do things that people expect of you either, because as a human being you’re constantly changing and evolving. Staying stagnant isn’t going to do anyone any good. But it’s the true fans that are going to stick with you for your evolution of music. That’s what’s really happened for Royal Distortion. We got a chance to actually do this band, considering we were on tour for seven years with Barb Wire Dolls headlining 900 shows. We did everything we could in the time that we had, and with the opportunities that we had, too. And we took it to its limit. But we just needed a break, and me and Pyn needed to do something new, too. So, it was a perfect time, a perfect situation, and it came together really easily.”

“In the beginning, it was a little rough to go from something like Barb Wire Dolls into something a lot more mellow, a lot more beautiful, in its own way. It took us a while to really understand what we wanted to do with this band, and showcase it in its best way. But I think we’re really starting to get there. Me and Pyn have been able to write songs daily. With Gabe on bass and Kevin on drums, we’ve really become a good unit very quickly. They’ve been contributing a lot to the band. Gabe, the vocals that he comes up with, the harmonies, are exactly what the band needs. Me and Pyn can do an acoustic set anytime we want, but it takes another monster to get onstage and connect to other people that you aren’t around 24 hours a day. I give them a lot of props for that.” 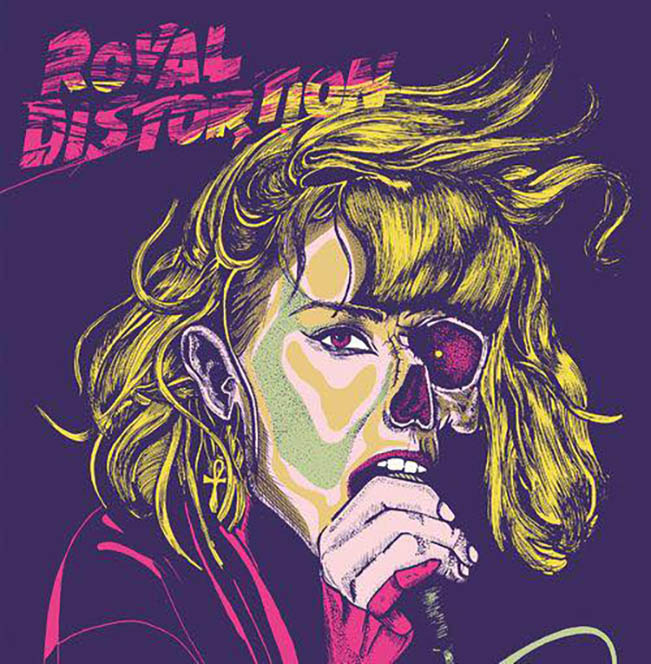 “We collaborate. There’s no one way of writing songs. Songs and music are everywhere. You’re just connecting to what is already there in the ether and interpreting it in your own way. This is probably our 17th show together that we’ll be playing together tonight, but you would think that we’d been playing years together. It’s really connecting well.”

IQueen and Pyn Doll (an ex-professional surfer and skateboarder) live in Venice Beach, about a one-hour drive from The Whisky. When asked about living at the beach as inspiration for writing, IQueen responded:

“It definitely helps us to connect to more beautiful melodies. You can connect to any type of music if you’re writing songs—in any situation. We were in a desperate situation at one point, and Pyn just started playing this one song that we’ll probably record for the next Barb Wire Dolls album at some point. The song’s called ‘Depression.’ I don’t know if I could write a song called ‘Depression’ living down in Venice Beach and being around something that I can connect to. Me and Pyn are originally from Greece and to be down on Venice Beach really reminds us of home. I don’t know if I could live up here in Hollywood away from the beach. Probably a song like ‘Depression’ would come out if we lived in Hollywood. (laughs) To answer your question, if you’re looking to write a song, you’ll never find it, or you’ll never find it to its best capacity. You gotta really just allow the inspiration to come on its own.”

What about life without the pressures of touring? “Yeah, well we’ve got time now. We’ve actually got time to focus on music, where as before it was ‘What time do you have to go to the venue?,’ you know, ‘What time do we have this meeting?,’ ‘What time do we have this interview?.’ What time are we playing tonight?’ It was continuously a schedule. I’m sure people can write like that and we’ve written like that. We wrote our third album like that with Barb Wire Dolls. But we’re definitely stepping up the level of songwriting now that we’re focusing more on it, as opposed to it being second-hand and everything else being first-hand.”

IQueen and PynDoll took a break in Greece after last year’s Warped Tour. “‘Good Times’ and ‘California Dream’ were written in that same period. But then we put them away. They didn’t work for Barb Wire Dolls. So, at the beginning of the year when we started coming up with songs that we were going to do with Royal Distortion, those two songs came up. We practiced with Gabe before we found a drummer, and he would come over with his bass. And all of a sudden he just starts singing and we didn’t even know that he could sing, let alone do these amazing harmonies that sounded perfect. So yeah, he had a lot to do with that, and of course it was something we wanted in the band, too. We wished it and it came true.” 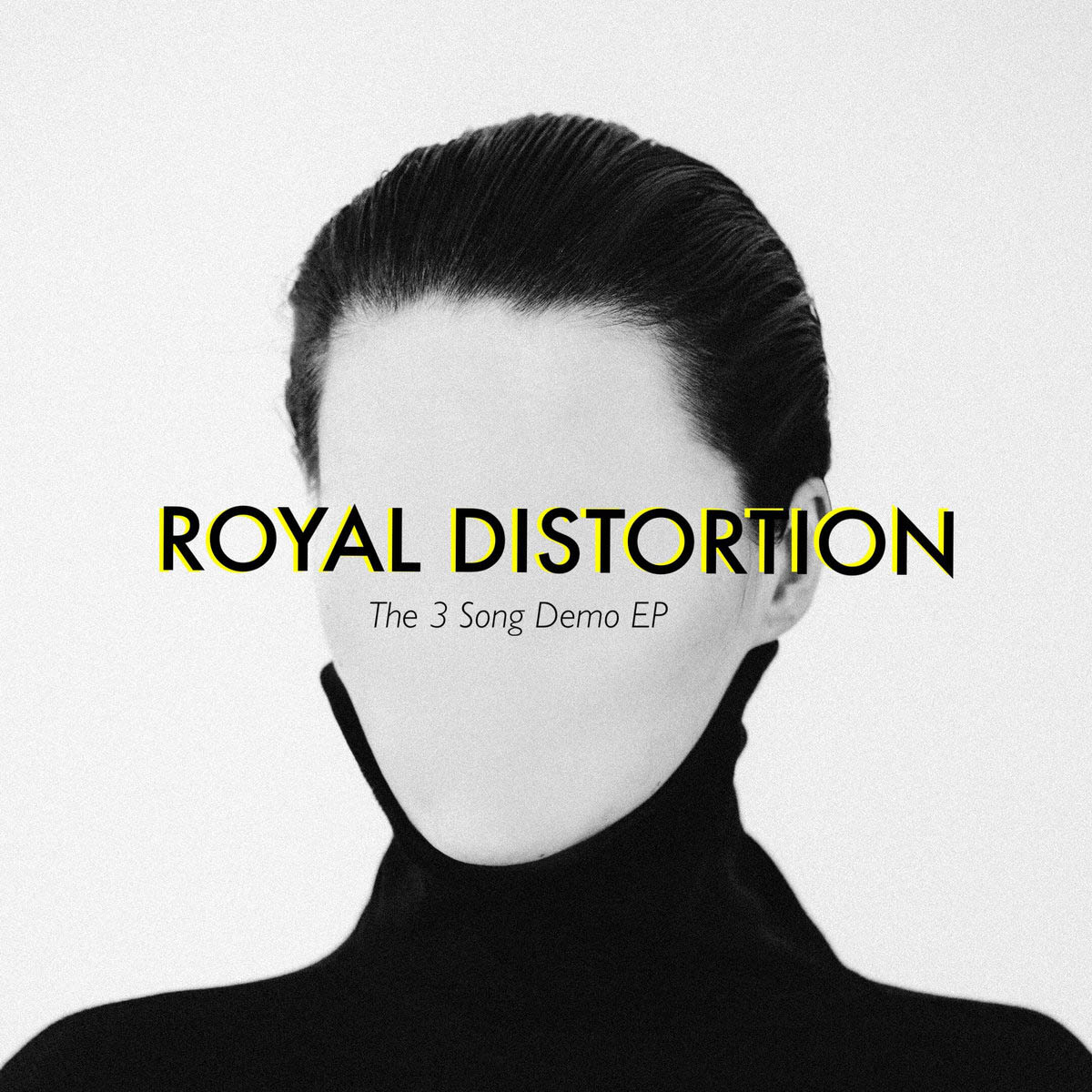 When asked if Royal Distortion had enough material for a full-length album, IQueen laughs: “We’ve got enough material for five full-lengths. All of them are A-class songs, for sure. I couldn’t choose one of my favorites, really. That’s why we’ve been trying to showcase these songs through social media with just me and Pyn playing acoustic because, like I said, we keep writing songs but there (are) a lot of songs that we had written throughout the years that just never made it with any Barb Wire Dolls records. There’s just so much. I’m excited to finally record this first album because I don’t know what songs to choose. (laughs)”

“Our idea with Royal Distortion in the very beginning was to do an new wave vibe with keys and be like The Cars, you know, The Cure, have like that sort of vibe going on. We love those albums, but at some point I would love to make an album like that with the right musicians. We just couldn’t find a keyboardist that was totally influenced by the ‘80s sound like, you know, (Nick) Rhodes of Duran Duran. To be able to put his sound onto our songs without us telling him, “No, you have to sound like this.” We’re still waiting for that person to come in, so we can actually make an album like that. That would be amazing. And to have the right producer, of course. There’s a lot that plays a part. The songs we keep writing—the melodies are completely different from each other. It gives a lot of power to do any type of music we want, but at the same time it’s actually hard to choose the right direction in what you have at the time. Right now we have an awesome killer rock bass player, a great drummer, that flows really well.”

Check out the band performing an acoustic version of “California Dream”

“We’ve had a couple indie labels contact us. We’re putting out two 7-inchers on two different labels (one out of Spain, one out of England). I’m excited for those things to come out. We’re looking for a label that’s really going to take us on, and we want to stick to one label because Barb Wire Dolls had licensed our albums to multiple different labels with our first album, then Motorhead Music picked us up. We really like having a parent label…as opposed to just throwing out music in different territories. (The late Motorhead frontman Lemmy Kilmister personally signed the Barb Wire Dolls to his label in 2015 after seeing them perform at The Whisky.) I don’t think the labels really knew what to do with us either, because we kept changing on every album with Barb Wire Dolls. That just shows that it was inevitable for us to either continue what we were doing and keep changing every Barb Wire Dolls album, or start a completely new project. I don’t regret any of it. I love the fact that we keep changing. I think in the future people are going to respect that a lot more than at the present time when we would throw out a different sounding album every time.”

“We have a new sound…we don’t really sound like anyone, either. What do you even call Royal Distortion? (How) do you classify it? We say ‘new alternative’ because maybe it’ll get people who are listening to alternative to come to a show. (laughs) But we’re just a rock band at the end of the day, and I think it’s hard to promote something like that, because there’s so much music out there that they don’t want to take their time and go see a band that they don’t know. But the people that do come, they’ll come next week and they’ll tell their friends, because we do put on a great show and the music stands for itself, too.”

Baker’s Dozen with Danny P. – Grill Up Some “Not So Southern BBQ Chicken”