On Wednesday 6th May 2018 the first groups of festival goers descended on Donington Park, the spiritual home for all things rock, metal and all the crazy shit in-between in preparation for Friday 8th June. It’s been 16 years since the very first Download and since its inception it has grown in popularity with this year seeing over 100,000 rock fans making, what now can be considered, a pilgrimage to see some of the biggest names in rock take the stage and perform.

Every year Download’s organisers up their game ensuring that no fan will be disappointed and this year we were treated to the likes of Avenged Sevenfold, the mighty Guns n’ Roses and the Prince of Darkness himself, Ozzy Osbourne headlining the main stage over the three-day event.

So, when I arrived, what was the plan for the first day of mayhem? Well, first things first, I made a bee line for the bar to start as I meant to carry on and headed out to explore. On my travels, before seeing my first band, I took in the sights, sounds and atmosphere of the main arena. The effort some people had gone to too entertain was something to behold. Of course, there was an unnecessary abundance of couples dressed up as The Joker and Harley Quinn (come on guys, there are many more inventive couples costumes). There was, however, an impressive amount of originality and some serious effort made with my personal favourite being Pickle Rick! 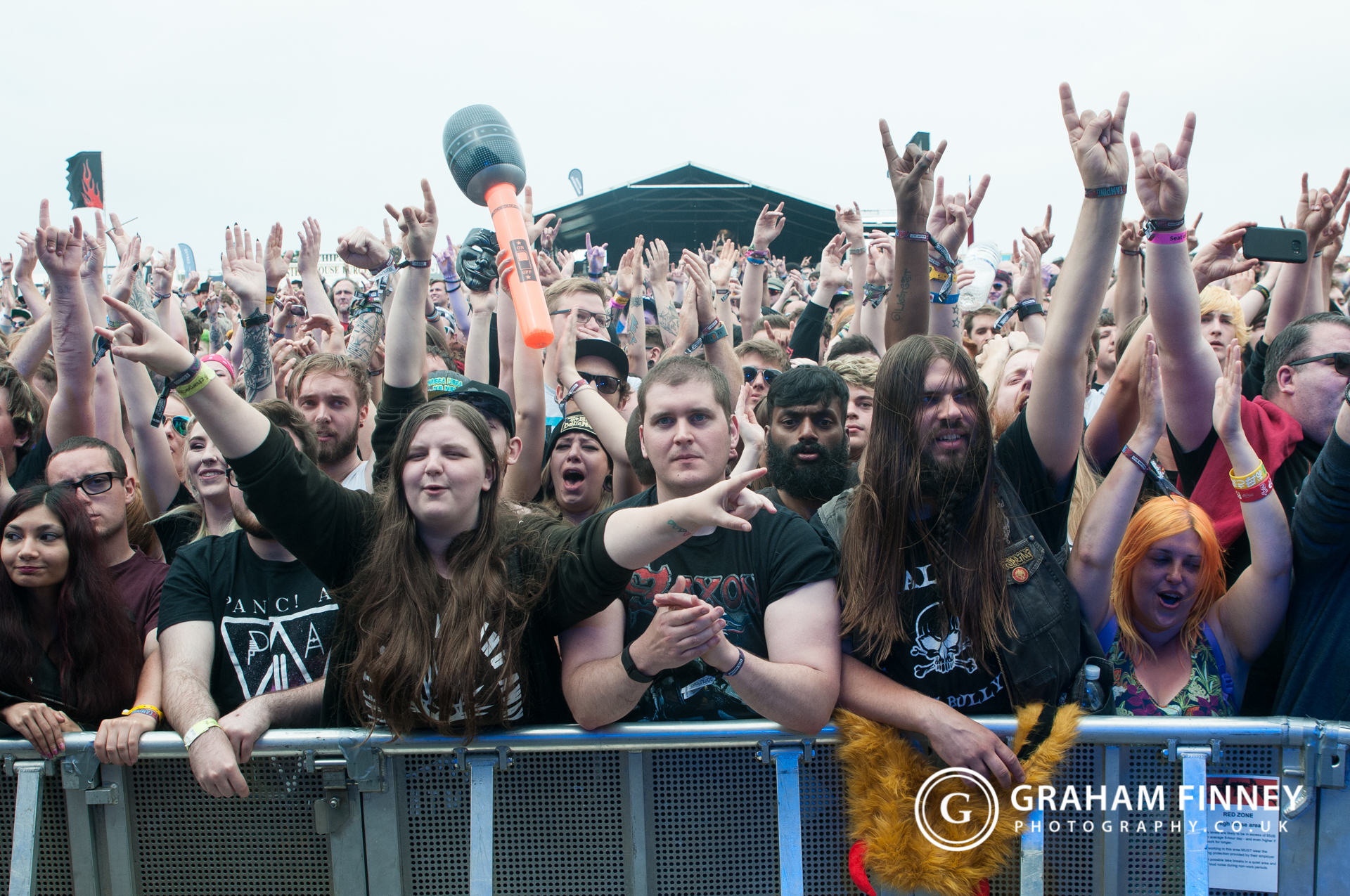 Anyway, the fans are here for music, so, let’s talk bands!

Opening up the main stage was British pop-punk group, Boston Manor. Formed in 2013 the band have earned their place on the main stage. Having heard positive reviews, I decided to give these guys as listen on the drive up and truth be told, I was underwhelmed! However, the live show blew me away! The performance was tight, the tunes were catchy and the group played with such passion it could have put headliners to shame. I will now be giving these guys a second chance.

Employed To Serve are barking out orders for the sizeable crowd to go “fucking nuts” as they kick off their set on the Avalanche Stage. Vocalist Justine Jones stalks the stage with an almost demented look on her face as the band shred through thirty minutes of brutal metallic hardcore. On a big stage like this the band were devastating, when they hit the clubs in July they’ll burn your face off!

Next up was the Marmozets. Taking to the main stage with earth-shaking, ear bleeding feedback over the PA, the Yorkshire rockers gave a kick-ass performance with lead singer, Rebecca Maclintyre, oozing confidence and natural beauty. It was like an unspoken message to everyone to be yourself no matter what. The Marmozets are not necessarily the kind of band that could headline Download but this matters not as their performance suggests that they were in it for the fun and not the fame. I highly recommend checking these guys out!

Nothing More are one of those bands you just have to see live once in your lifetime. Obviously the sensory assault they dish out isn’t as effective when played out on the spacious Zippo Stage with the festival still barely hours old but watching frontman Jonny Hawkins writhing about the stage crushing alt-metal anthems like “Go To War”, you find yourself watching one of the highlights of this immense weekend of rock music. 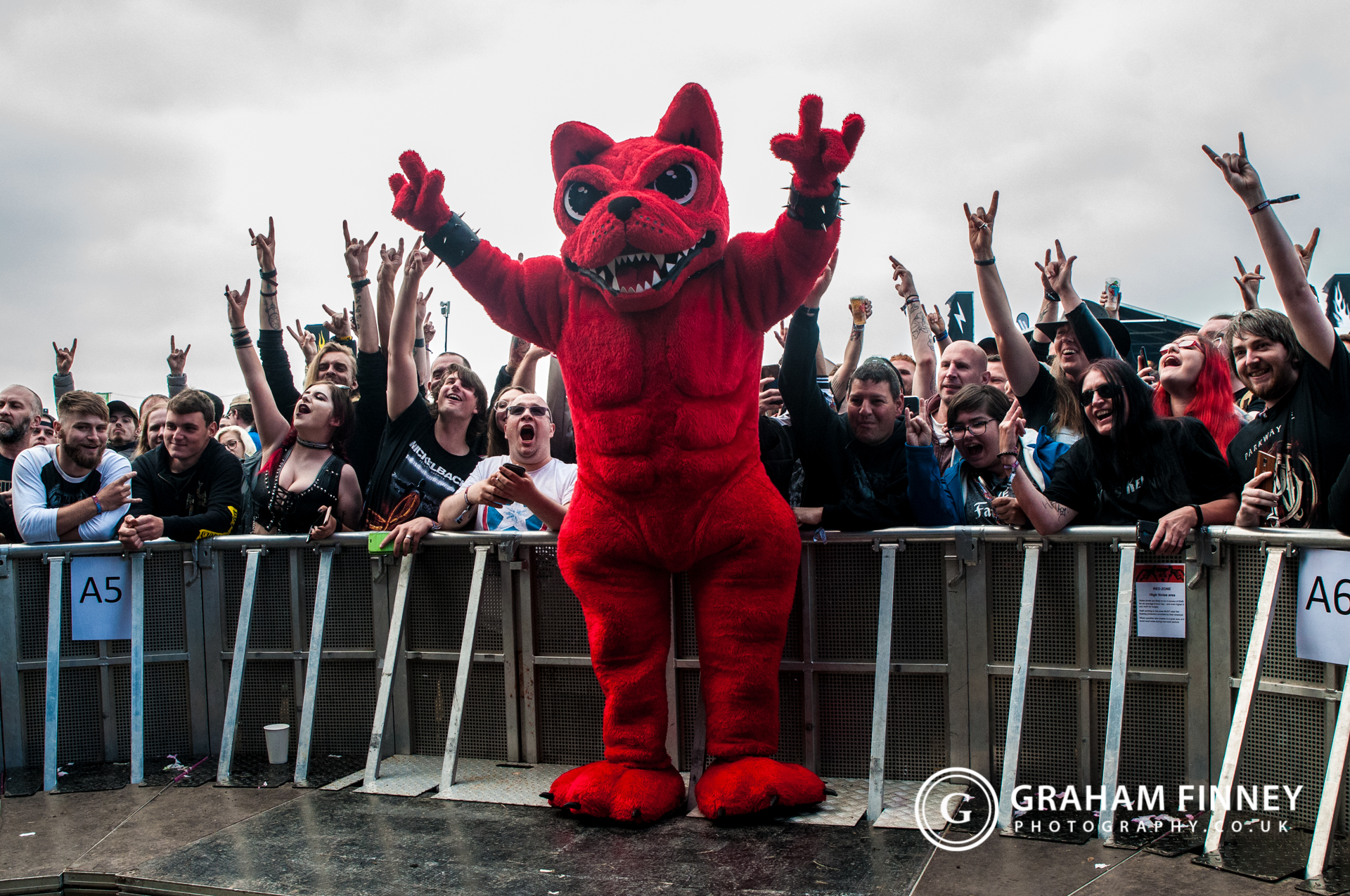 Let’s not mince our words here, Andrew W.K and his gang are here to make sure Download Festival has a party! Pumping fists, grinning from ear to ear and headbanging his way around the Zippo Stage, Andrew W.K. brought a dose of FUN to Download with tracks like “You Will Remember Tonight” and “We Want Fun”. A field full of people lost their shit as Andrew W.K made sure, in the afternoon sunshine, every single punter not only partied but they partied HARD!

Sadly, only catching a fraction of Volbeat’s set due to the first, of many frustrating clashes of the weekend, it was well worth the slow walk by on my way to the Zippo Encore Stage to see Korn frontman Jonathan Davis for his first solo outing at Download. Volbeat played an epic selection of their greatest tracks including “Evelyn” for which they were joined by Mark “Barney” Greenway of Napalm Death.

After the brutality of Employed To Serve, it’s time to take a more politcally-charged direction as hardcore bruisers Stray From The Path whip up a fury on the Avalanche Stage. Hardcore kids go nuts in the pit as the band smash them in the face with tracks like “Goodnight Alt-Right” and, as you witness this RATM-tinged brutality, you wonder why this band aren’t absolutely fucking huge.

After the tackling the hike up the hill to the Zippo Encore Stage, I was just in time to see Jonathan Davis take the stage. The Korn frontman, delivered a performance that was a strange juxtaposition of itself, it demonstrated that Davis has the ability and deserves a solo career, however, it was also the case that it sounded undeniably like Korn. This was not just due to Davis’s vocal style, but also the music behind it. Still, they did bring an extra layer to the music by utilising both a double bass and a violin.

Hardcore plays a big part in the line-up on the Avalanche Stage on Friday and, just when security thought they were going to get a bit of a breather, Stick To Your Guns deliver up an absolutely scathing set of traditional hardcore. The Californian mob tick all the right boxes with their sound but were always going to struggle sandwiched between the devastating Stray From The Path and the metallic grind of Cancer Bats.

Having released their secret album earlier this year then followed it with a series of incendiary club shows, Canadian chaps Cancer Bats continued the mayhem on the Avalanche Stage with a suitably chaotic set. The familar sludgy, punk sounds of “Hail Destroyer” whipped a packed out tent into the kind of frenzy that, yet again, had security on the barrier working overtime as a stream of bodies spilled out over the barrier.

By the time New York troublemakers The Bronx were hitting the stage, things were getting a little tense in the photo pit with The Bronx frontman Matt Caughthran not helping matters by barrelling headfirst into the middle of the pit midway through the second song. As before, this was the perfect spark to ignite carnage around him with his band mates providing the perfect soundtrack a few feet away.

Returning Brit rockers Hell Is For Heroes are celebrating fifteen years of their debut album The Neon Handshake this year and judging by the way frontman Justin Scholsberg and the rest of the Heroes fling themselves around the stage, they’re enjoying the material as much now as they did back when the album first brought them to the attention of the rock scene back in 2003.

After a day which has seen some great acts grace the Zippo Stage, it was left to Brit rock outfit You Me At Six to bring the curtain down on the stage for the first day. Frontman Josh Franceschi had a grin on his face from ear to ear as he surveyed the crowd camped out in front of him for the return of the Surrey rock chaps to Download and the band didn’t disappoint their massive fanbase with a career-spanning set including treats from their upcoming new album. The Zippo Stage has had everything today from alt-metal to international superstars to, in the case of You Me At Six, a classy pop-rock headliner.

Closing up the Avalanche Stage were punk rock veterans Bad Religion. This was a show I had no intention off missing! Having been around since the 1980’s, Bad Religion now have nothing to prove to anyone, they still had an amazing stage presence and were cracking jokes including the fact that they were not going to be around for the rest of the weekend because Axl would kick them out! Entering the stage to “My Sharona” by The Knack the set included some of their most popular songs including “You”, “21st Century (Digital Boy)” and “American Jesus” just to name drop a few. Finely seeing these guys was one of the big highlights of Download 2018! 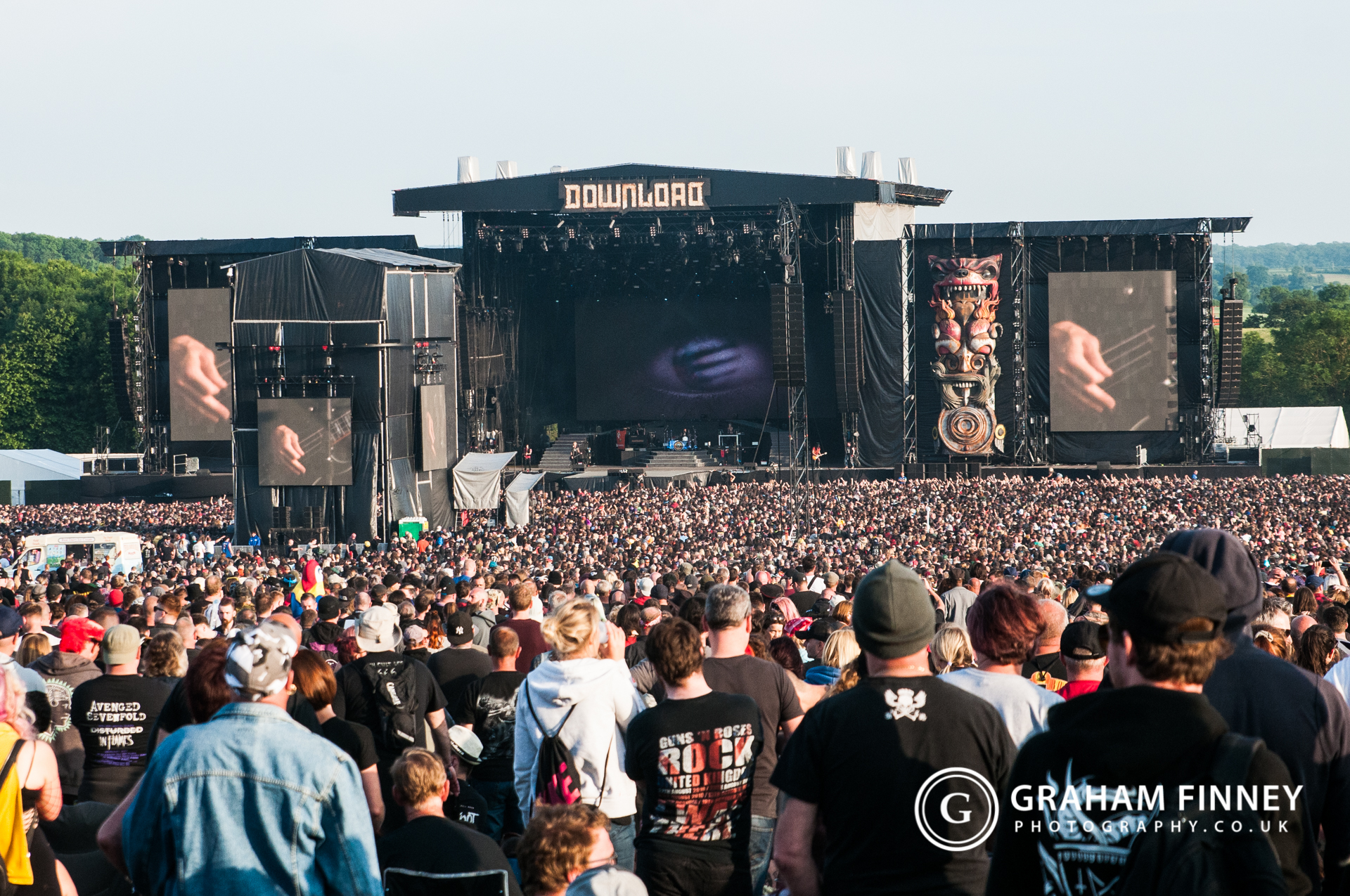 Headlining the Main Stage for this evening was Avenged Sevenfold. Entering the stage to AC/DC’s “Back in Black” they proceeded to deliver hit after hit including “Welcome to the Family”, “Nightmare” and a cover of “Wish you Were Here” by Pink Floyd. All this accompanied by pyrotechnics that looked ready to burn the stage to ash. It would not be an Avenged Sevenfold show though if they did not pay a tribute to their fallen comrade, The Rev.

Today’s bands were something to behold, but this was just a taster as to what was to come with two more days of talented new artists and world-renowned legends still awaited the fans at Donington Park. A sensible thing to do would be to get some sleep, but this is Download and it’s time to party until the wee small hours. Sleep when you’re dead!