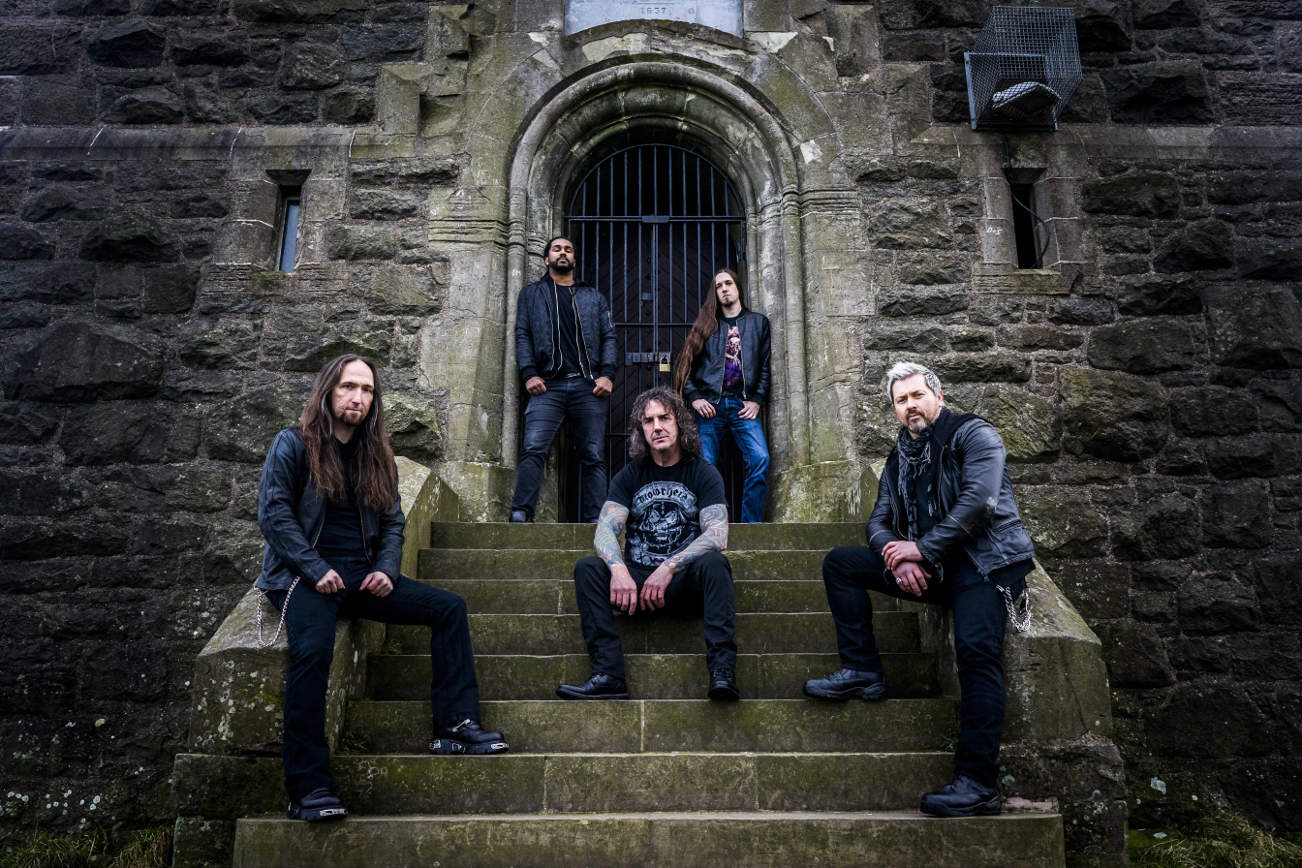 For this latest edition of UnCovered, we speak with John Harv Harbinson, lead singer of Belfast, Ireland’s Stormzone about the artwork for their latest album, Lucifer’s Factory, which is due on April 23rd via Metal Nation Records. (Pre-order a copy now via eBay right here.) The band draw from a lot of mythical content when writing their music and the thirteen tracks that encompass Lucifer’s Factory are all based on old Irish myths and legends. Pretty cool stuff….

Your new album cover is crazy-cool. Tell us about the artist and how you found him/her?
John Harv Harbinson: We actually found him in an institute for the insane, crouched in the corner of a padded cell mumbling something about how Stormzone had destroyed his mind and ruined his life! Well, OK, the ruining of his life might be a lie but driving him insane is absolutely true, and I should know because I am the artist and also the singer in Stormzone. I always saw art and heavy metal music as going hand in hand, one definitely seems to compliment the other. When I was at school and kind of discovered that I loved heavy metal at the same time as discovering that I was quite good at art.

This really helped when it came to combining them to get some money as I was able to infiltrate the local band scene and they would get me to paint their backdrops for shows and then the people who would come along to the shows would then get to know me and discovering that I did the backdrops for bands they would then ask me to paint heavy metal emblems on the back of their denim jackets. I lost count of how many Motorhead designs I did in those days, but this was the early ‘80s so they were simpler times, less bands and most people wanted Motorhead, AC/DC, OZZY, Saxon or Iron Maiden’s Eddie on their backs.

What was the inspiration for the album’s cover artwork?
Harbinson: All the songs on Lucifer’s Factory are individually based on a myth or legend unique to Northern Ireland. There are already a lot of well-known Irish characters who have gone down in legend and folklore, the Banshee, Leprechauns and Giants, but with this new album I wanted to discover and tell the world about less well-known Northern Ireland legends which, when uncovered, are absolutely amazing, and right on our own doorstep! The song “Dark Hedges” isn’t about the place made famous by Game of Thrones, it’s real, legendary status existed long before the television series invaded our shores.

Lucifer’s Factory is a real building which existed in Belfast and made matches, it burned down and several young children working there were killed in the blaze and until the building was recently demolished, people in the neighbouring houses were terrified over the years by the sound of screaming children coming from behind its shuttered doors and windows. There are many more on the album, and each one could have inspired me to create album artwork, but I was particularly intrigued by the legend of Dundermot Mound, a landmark just outside Ballymena in Northern Ireland which was reputedly a “Gateway to Hell” and the area in which Lucifer fell to when he was exiled from Heaven. The song on the album “The Heaven You Despise” describes all this in greater detail, and for me I just had to imagine what the ‘gateway’ would look like when it opens. 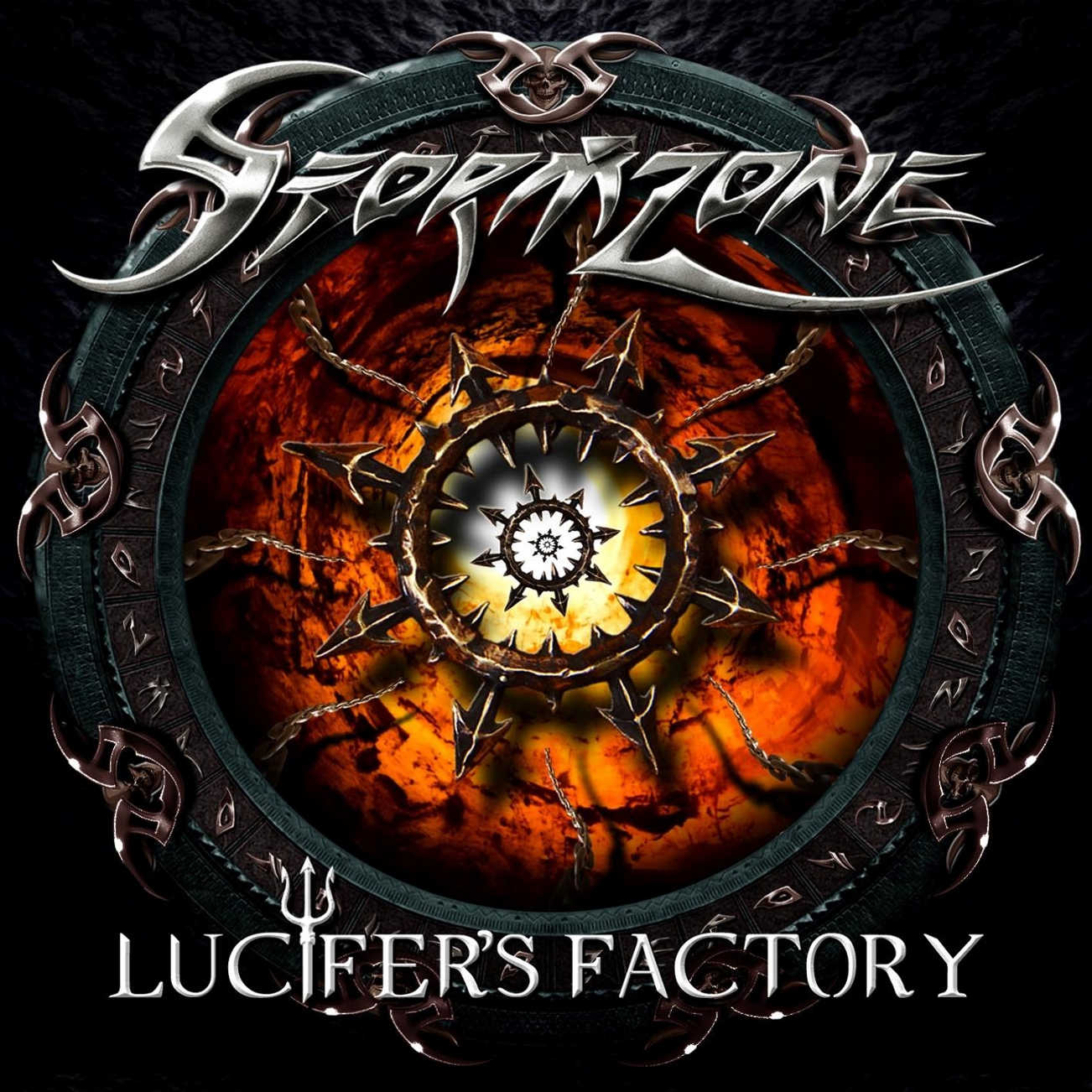 Please elaborate on the medium(s) used when creating the art. We’d love to know how the artwork was created.
Harbinson: I work in all mediums, but my favourite one is oils on canvas. With Lucifer’s Factory I didn’t have to be exceptionally detailed because everything was going to be eventually transferred onto a laptop screen so that the logo and titles could be added, and during this time I took the opportunity to tidy things up and really bring out more details making it look sharper. I only wanted to use various shades of the one colour of blue for the exterior of the gateway and then draw you into the tunnel by using a gradual lightening of red, orange, yellow and white, basic flame or furnace colours.

The idea was to make your eye travel from the cold outer surface and then go into the depths of the interior in an attempt to make you feel what it would be like to be condemned to that journey. It always starts off with a series of pencil sketches which I’ll do lots of until I’m happy with a basis of a design before transferring that chosen drawing onto a canvas. Whenever I am doing an oil painting I generally don’t like to spend more than one or two days before completing it, longer sessions become arduous and generally mean I’m putting too much detail into something, but in the case of this album cover I think I spent five days at the canvas, so adding preparation sketches and then tidying it up afterwards on Photoshop the whole thing probably took around ten days. For me, that’s usually time for at least four normal paintings!

What were the partnership’s dynamics like? For example, was a specific look given, or did the artist have full free range?
Harbinson: There is always a consultation period before I launch into finalising an album cover design. I have painted the last three album covers, and I was reluctant at first to take on the challenge because the first two were created by the legendary artist Rodney Matthews, who has also done covers for Thin Lizzy, Diamond Head, Asia and Praying Mantis amongst many others, and his portrayal on the first Stormzone album Caught In The Act is particularly stunning. But with an eye on costs and knowing that we needed the Stormzone funds to cover many more things other than album artwork, I decided that I would do the paintings and as long as the rest of the band were happy with how each album was going to be represented by me then I felt confident enough to take up the challenge. So, as with the previous albums, I would send the guys in the band a written idea of what I had in mind describing a concept.

Once that has been approved I then get down to an initial design and then pray that the first one is the one they like. Dynamics and energy get lost when things have to be rubbed out, amended and added to. I showed the guys my idea for Lucifer’s Factory at a rehearsal on my laptop, I’m always worried about what their reactions are going to be, but I’m equally really pleased if they approve it right away, and they did so with my Gateway to Hell artwork. It is a real advantage being in the band that you are designing a cover for because things obviously get talked about during rehearsals and meetings and an idea of what the guys are after in an image representing the new album is gradually already forming in my head, so when they see an initial image they’re probably not aware just to the extent of how they have influenced it!

Would you consider the artist an additional band member, or someone contracted for just this piece?
Harbinson: Hahaha, the artist really IS a band member! With the increasing popularity of digital music, most fans view artwork as just pixels on a screen. Why did you feel the artwork was important?
Harbinson: I think artwork in heavy metal is amazing and without a doubt the best and most challenging artwork in the music business. There is no way a heavy metal album could do what pop bands or country bands do and just feature a photograph of a dude wearing a cowboy hat or some jewel-encrusted rap artist sitting on a throne. Heavy metal fans, and reviewers, are exceptionally demanding and everything has to fit into a pattern and the way things have to be, and I love that. Album artwork in heavy metal has become exceptionally important to the whole genre and it’s absolutely true that digital music is a major player in today’s music world, but to me downloading music is like reading a book on a kindle, it’s convenient, it does the job and you can obviously have a lot of downloaded files on one player or reader. But to me, as with books, there is nothing quite like having the album in your hands and placing the CD into the player.

I’m old enough to have had a vast collection of heavy metal on original vinyl and the feeling was actually better then and I am so glad that there is now the opportunity for people to get hold of albums on vinyl, especially heavy metal albums, because of what I’ve already said, it’s really worth it to see album artwork bigger, especially if it’s quite highly detailed. It was a tradition walking home from the record store with a new Saxon, Dio or Iron Maiden album and very carefully taking the vinyl from it’s sleeve and gently placing it on the turntable before blasting yourself with metal and studying the cover! Iron Maiden albums in particular were brilliant for studying in the larger vinyl format and finding little treasures hidden in there by Derek Riggs. That is gone with the digital music revolution, but at times there are chances to re-live those glory years, and just in case vinyl makes a bigger comeback I want people to be able to see my artwork slightly larger and to find the smaller details.

How do you think the album art will affect the listener’s perception of your album?
Harbinson: I do truly hope that the journey the listener takes during the songs on Lucifer’s Factory will be helped by what they see on the cover art, and it’s also good that without a real insight into what we’ve been talking about here the listener won’t at first be aware that the singer he is listening to is also responsible for the artwork, so he or she can judge for themselves as to whether or not the imagery on the cover compliments the music on the album. My own expanded thoughts when creating the painting was that although it was initially intended as a background as to what the song “The Heaven You Despise” was all about, when it was completed and then entitled Lucifer’s Factory it immediately struck me that the place you are being drawn into could well be the place where the songs on the album are manufactured, or at least the myths and legends behind them!

Everything on the album has to be created somewhere and I got the feeling on completion of the artwork that I had inadvertently built a dark abyss where, for the first time, people can actually get a glimpse into the place where my lyrics and themes along with the band’s music are all combined to make Stormzone songs. That’s maybe what I’m hoping people will think now, it is indeed a dark place, I should know, I’ve been there!

Check out the video for the latest track “Dark Hedges” below.