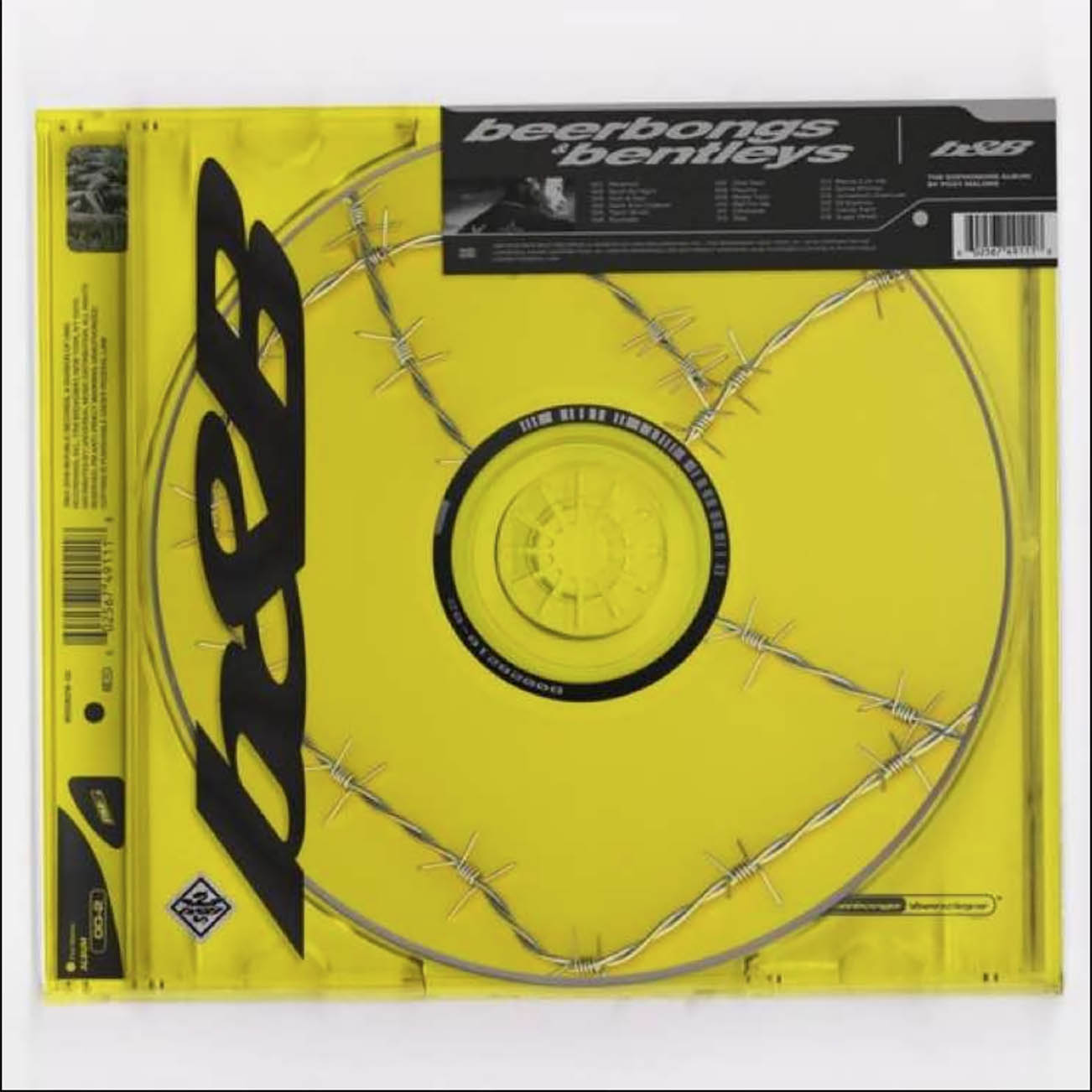 For Post Malone fans, the wait for the follow-up to 2016’s acclaimed Stoney has felt like an eternity. Fans were never given a proper release date, unless jokingly teased by Post, but all that changed a few weeks ago, during “The Bud Light Tour” stop in Nashville, when April 27th was confirmed. Now we have beerbongs & bentleys!

Before I go into the actual music, let me just talk about the cover art. Post has been notorious for questionable merchandise/clothing lines and this album’s art stays within that theme. While I can appreciate its simplicity, (to me) it’s just ugly. And the barbed wire? This isn’t the 90’s. Nobody is digging the barbed wire look. Or I hope they’re not. I’d hate to see the barbed wire tattoo come back as a trend. Now, to the music….

In the same style as his debut, this record is a long listen; 18 songs and over an hour of music, to be exact. While an album with this many tracks can seem daunting, getting through the entire thing was surprisingly easily. On this release, Post’s rap game seems to have taken a back seat as he has opted for a cleaner, singer-based sound, perfect examples of which are on tracks “Paranoid” and previously-released single, “Candy Paint”. That said, Post also ventures into some bold new territory. Well-known to be a lover of all sorts of music, he showcases his influences throughout this release.

The slowed-down, sombre track, “Stay” shows his country side while “Jonestown (Interlude)” and “Otherside” (album favourite) sound like alternative-pop tunes in the vein of Twenty One Pilots. While we do get a good dose of the hype hip-hop that fans adore (“Zack and Codeine”, “Same Bitches”), the style grows stale over time (“rockstar”, “Takin’ Shots”) as there isn’t much differentiation in the electronic drum beats and synth voices. It seems that the proclaimed “rapper” can write and sing a hook better than rapping bars.

Musically, this album is a mess, but it’s an intriguing mess at that. Post Malone has somehow managed to create a listenable recording with way more sounds and songs than before. If you’re not yet familiar with the modern age of hip-hop, then this album would make for a good introduction.

Time to get “Psycho” with the video for the single featuring Ty Dolla $ign.