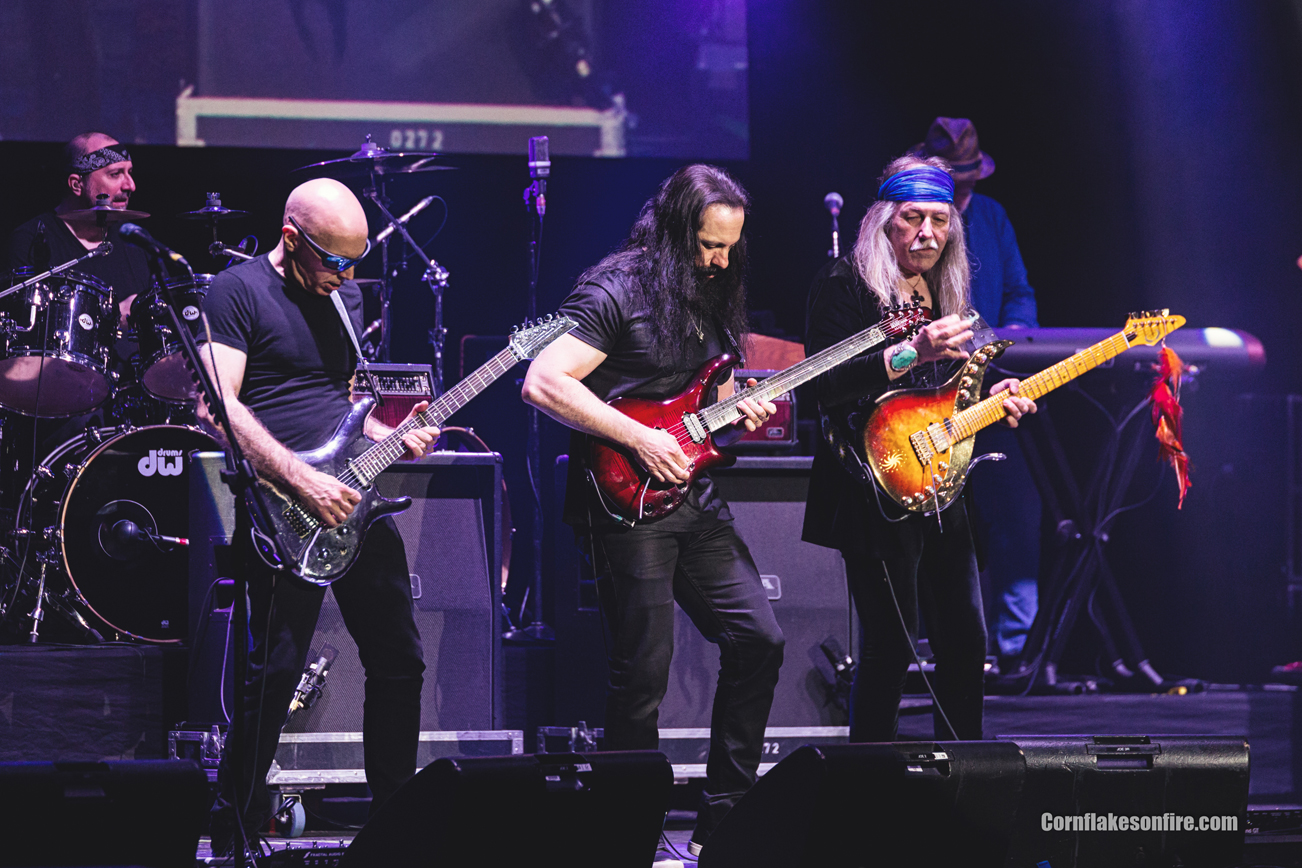 In 1996, guitar virtuoso Joe Satriani decided that the only thing better than one guitar legend being on a tour is three guitar legends being on a tour, and thus the G3 shows were born. Since then, Satriani has enlisted a who’s who of six string geniuses to accompany him on shows round the world under the banner of G3 and, for the European leg of the 2018 edition, John Petrucci (Dream Theater) and Uli Jon Roth (ex-Scorpions) have come along to showcase their talents.

The running order of the G3 tour is that each guitarist gets to play a solo set and then there is a jam session at the end involving all three players. It’s up to ex-Scorpion Uli Jon Roth to get things going tonight. Uli is best known for his time with the Scorpions in the ‘70s but that is not to say that he has been resting on his laurels since then, with an impressive touring schedule, teaching at his Sky Academy and overseeing the development of his signature Sky Guitars all happening concurrently. Uli knows what the fans are here to hear so his five song set contains four Scorpions tracks, including the emotive “We’ll Burn The Sky” which is dedicated to his to his recently deceased brother Zeno. Uli also throws in a short solo section which ends up sounding like an F1 race and tests his whammy bars stamina. Unfortunately, even though his skill is never in doubt, Roth’s set is let down by a poor sound mix. There are five musicians on stage with him, but the bass player and one of the two rhythm guitarists may as well not be there as they cannot be heard at all. Uli’s vocals, when either singing or talking, sound like his mic is stuffed with socks as there is just no clarity and he comes across as quite muffled. It’s a pity, because a man with such talent to offer deserves better.

Next up is Dream Theater founding member John Petrucci and where Uli John Roth brought a team of musicians to help him out, Petrucci has boiled it down to a power trio. Joining him on drums is Dream Theater bandmate Mike Mangini and handling bass duties is long-time Petrucci partner in crime, Dave LaRue. With the setup scaled back to its constituent parts and with no keyboards, synthesisers, or vocals providing distractions, Petrucci and Co. suffer none of the sound issues that came before. Playing songs from his 2005 solo album, Suspended Animation, and throwing in other tracks like the Wonder Woman theme “Wrath of the Amazons” and the appropriately titled “The Happy Song”, The Petrucci Power Ensemble introduce a harder, almost heavy metal edge to the evening. Petrucci’s musical abilities as a master technician will never be in question and as the last chords of “Glasgow Kiss” ring out, we get our first standing ovation of the night. Not bad for the baby of the G3 tour.

After the quickest of quick turnarounds, the head honcho of the G3 enterprise saunters on stage and launches into his set. It was my first time hearing some songs from Satriani’s recently released 16th studio album, What Happens Next, and they are just what you expect from a man who has been plying his trade for the guts of four decades. “Cherry Blossoms” is a laid back track that, unsurprisingly, conjures up the feeling of being in an orchard in summer while “Thunder High on the Mountain” has a chunky riff that just sounds great through a proper PA system and gets all the heads nodding. Joe also peppers his solo set with some older numbers, rounding things off with “Summer Song” which gets the biggest reaction of the night. I’ve seen a lot of professed instrumental guitar gods in my years of going to shows, but, in all honesty, the majority of their gigs do nothing for me even though they are all technically accomplished. The thought of standing through another 3 hour Steve Vai laser blasting fret-fest, to name but one, fills me with an unnameable dread. But Joe Satriani has a certain funky groove and flowing style of playing that somehow keeps everything he does interesting and will always be the guy I go to to fulfil my instrumental noodling needs.

No G3 show is complete until the final jam session featuring all three main protagonists is done. After Uli and Petrucci are reintroduced, they dive into Deep Purple’s “Highway Star” with Niklas Turmann taking on vocal duties. “All Along the Watchtower” and “Immigrant Song” also get an airing, with each of the three guitarists taking turns at trying to extend each song beyond its technical limits. It’s a grandiose display by three masters of their craft which, if viewed in any other context, could be seen as utterly excessive, but this is what the G3 tour offers and this is what the G3 fans want.