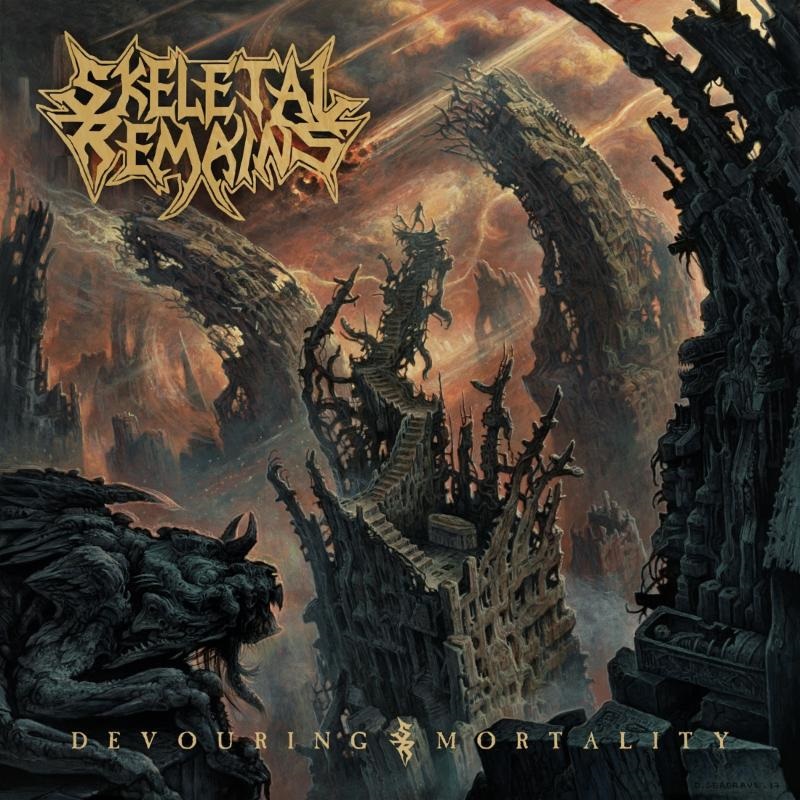 Care of Dark Descent Records and Century Media Records, Skeletal Remains is releasing their vaunted third full-length album, Devouring Mortality, in April of this year and it is another impressive showing. After two full-length albums via German label FDA Rekotz, the band has not only crafted their best release yet, but also what is thus far 2018’s best death metal full-length.

Every track on Devouring Mortality is a highlight. Typically, labels choose a focal track or two to feature in press releases for a band’s album but that’s not the case here. I’ve listened to this recording for three weeks now, and it never gets old. From beginning to end, Devouring Mortality will hold your attention during repeat listens. In an age when hyped-up, no-talent bands get all the focus, it is nice to hear such a solid death metal album from a humble Los Angeles-based quartet intent only on doing what they love most: shredding! This is very refreshing and noteworthy for any bands looking for inspiration in a metal scene full of fascism and posery.

After all, groups that come and go with fascist vernacular only alienate the lot of us further from a world that is already short on understanding and patience. If a band can simply concentrate on humbly producing quality music, and do so without pretentious skulduggery, we fans are spared of all the baggage that comes with metal acts touting suspect personalities. Skeletal Remains focus on the music in Devouring Mortality, and it shows. Even the Dan Seagrave-created artwork further proves that point.

Dark Descent Records is releasing Devouring Mortality in America, and Century Media is doing so for the rest of the world. Show this talented foursome some love by checking out this top-notch album. Listen and you might hear Martin Van Drunen-style vocals kicking poser butt. Maybe Suffocation’s old-school meets brutal death metal guitar acrobatics. You might even hear shred, groove and blasts like the best of death metal’s forefathers as we knew them. So, kick out the jams and play Skeletal Remains’ newest for yourself, and any trve death metal fans. You won’t regret it!