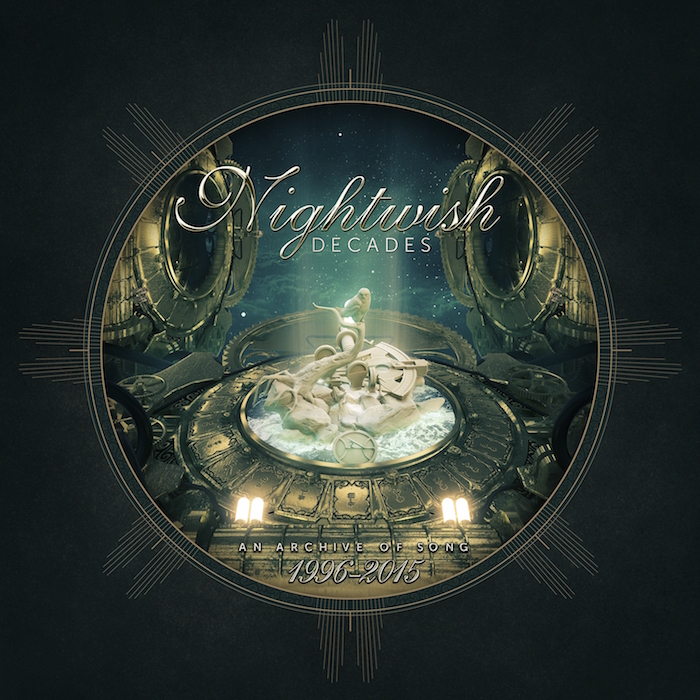 Nightwish is one of many musical sensations to come out of the sparsely populated country of Finland; accompanied by such names in the industry as Finntroll, Lordi, H.I.M., Korpiklaani, The Rasmus and the almighty Battle Beast. Those are some big names from a country of only 5.5 million people – and they are just from the top of my head!

Having been conceived as a band in the summer of 1996, Nightwish have simply gone from strength to strength; even with very public changes in vocalists – namely Tarja Turunen, Anette Olzon and the current statuesque Floor Jansen. The Decades compilation is to celebrate the group’s diverse and sublime discography, throughout their colourful history.

Contained in this epic creation are 22 tracks, all chosen by composer and keyboardist Tuomas Holopainen to symbolise the path his baby Nightwish has taken over two decades. This wandering pathway stretches from the original self-titled demo “Nightwish” at the end of the record to some of their more timeless classics such as “Élan”, “Nemo”, and “Elvenpath”.

The album opens with legendary track “The Greatest Show on Earth” from their latest album Endless Forms Most Beautiful of 2015; which is a stunning 24-minute epic featuring Floor’s haunting vocals, Richard Dawkins’ narration, imposing classical sections followed by Nightwish’s heavier trademark symphonic metal. All these elements are blended with some creepy musical samples to all work together and symbolise everything this band is about.

The songs featured in this compilation are mainly outstanding, haunting, and mystifying; and Holopainen’s wish to keep all the songs in their original form is an extremely well-judged decision; although Floor is more than capable of a stunning rendition of “Ghost Love Score” live, there is nothing quite as perfect as hearing the original version with Tarja Turunen’s vocals.

Even though the band is well known for their haunting lyrics with masculine backing vocals provided by bassist Marco Hietala, Nightwish is still able to shock and enthrall the listener with thunderously heavy tunes like “The Poet and the Pendulum”, which is stunning in its composition and still manages to haunt after over a decade. But then on the flip side of the scale, the listener is gifted with some of the most melancholic beauties in the discography like “Ghost Love Score” and “Sleeping Sun”, coupled with classics “Nemo” and “I Wish I Had An Angel” and when they start playing, it is like hearing them in their purest form once again. An interesting point to note is that the Decades winds from the latest track the band released right up through their history to their first track.

After listening to this recording in its entirety, in my opinion, it is a wholesome addition to the band’s already critically acclaimed portfolio, even though there are no new tracks but instead a compilation of some of their finest all in one album. For an established Nightwish fan, I would wager this collection echoes their own personal playlist of favourites; and for music fans not yet acquainted with this band, it would be a fine addition to their wish-list to learn about the band’s work and hopefully develop a taste for it.