Scranton’s industrial/hardcore hybrid sextet, Motionless in White have been around since 2005. They’ve released six albums in that time, and while they all have something special about them, there’s surely some that are better than others. Here’s our hierarchy of Motionless releases, from worst to best, along with a short commentary, noteworthy track and more.

Check out the band’s music video for the song “Immaculate Misconception”.

06. The Whorror (2007, Masquerade Recordings)
– The band’s first EP, The Whorror, is a small, six-track piece that demonstrates the youth that the members of Motionless had when starting their career. While the EP isn’t terrible, it’s not a noteworthy piece of art either. The band’s sound was rough, and heavily inspired by punk. The Alesana-like vocals cut through violent riffs that are reminiscent of a high school garage band. Early Motionless was also a lot more immature in the songs’ content, and this has been previously noted by frontman Chris Motionless. The tracks’ titles couldn’t escape this treatment either, with the opening piece of the album dubbed: “Just When You Thought We Couldn’t Get Any More Emo, We Go and Pull a Stunt Like This.”

The Bottom Line:
– The album is worth listening to if you want to hear how Motionless evolved from high school edge to true dark industrial, but it doesn’t sound anything like any of their future recordings. If you’re not a fan of punk/hardcore hybrids, this album won’t be for you.

Noteworthy Track: “Schitzophrenicannibalisticsexfest.Com”
– This humorously-titled closing track is the best on the album, and the band enjoyed it so much that it was remade for their first full-length, Creatures. 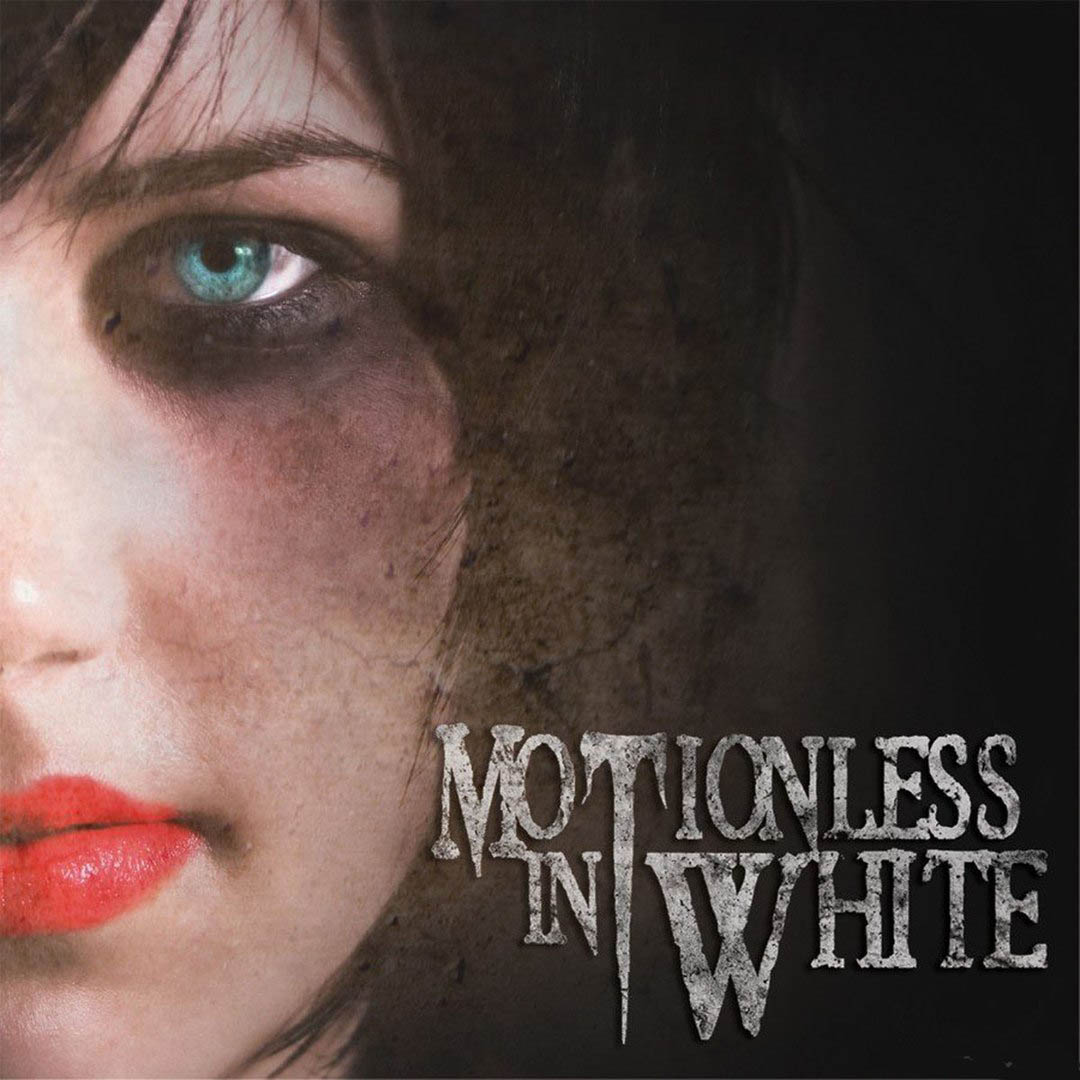 05. When Love Met Destruction (2009, Tragic Hero Records)
– Better than the oldest, but still not as good as any of their full releases, When Love Met Destruction comes in at fifth place. This album is the first that shows Motionless’ steps towards industrial, as keyboardist Josh Balz had a much more prominent role in all of the tracks on this second EP. The production on this release was significantly better, with the mixing showing more clarity over The Whorror’s rough, punky mix. Chris Motionless’ vocals also improve on this album, displaying more of a range and maturity, especially accentuated by his depth.

The Bottom Line:
– This album is definitely the inspiration for Creatures, and is worth listening to in its quick, six-song entirety.

Noteworthy Track: “Ghost in the Mirror”
– The second track on the album is the first for which Motionless made a music video, and displays the band’s newfound depth. The clean vocals are also a lot less whiny with this release. 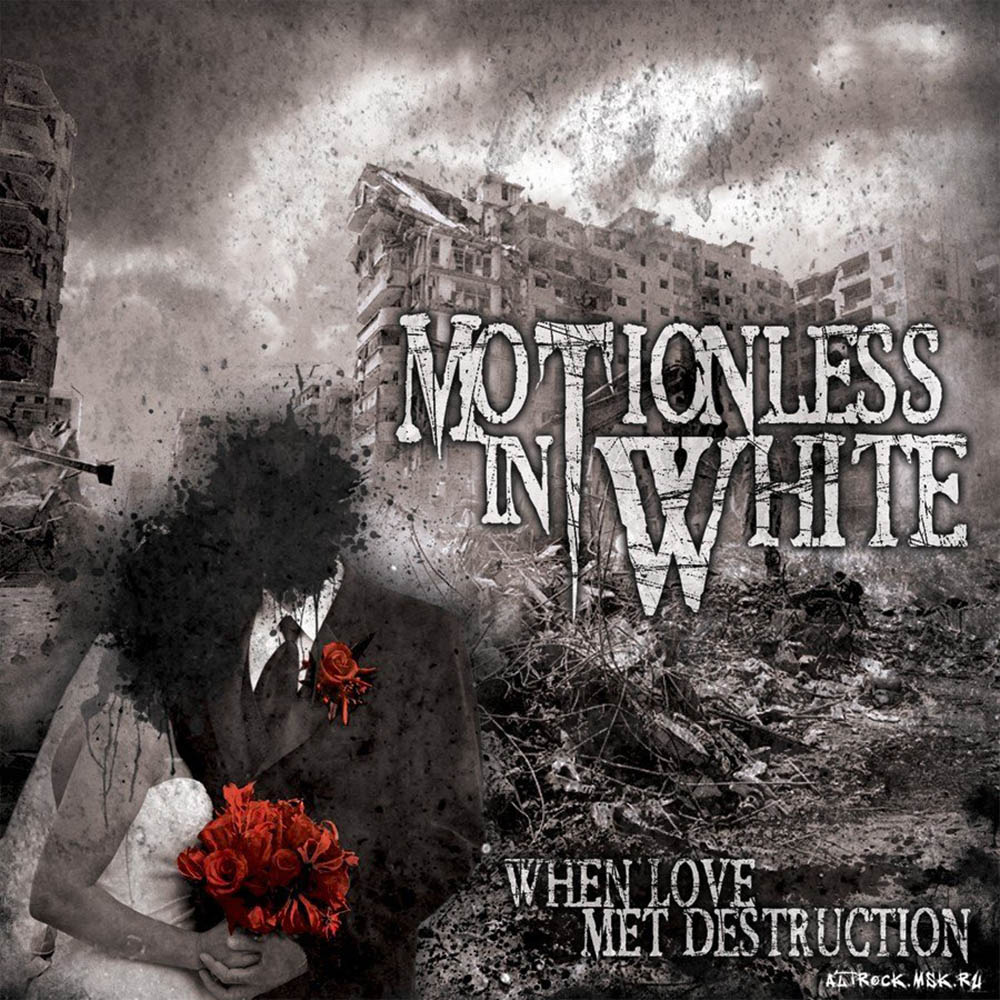 04. Reincarnate (2014, Fearless Records)
– Reincarnate is a good album. A really good album. It’s just that the three albums above it are great albums. Where Motionless’ fifth album has killer tracks like “Everybody Sells Cocaine” and “Wasp,” it also has some weaker pieces like “Carry The Torch”. This album’s sound is very mixed, with some tracks pushing metalcore and others touting the industrial niche that Motionless has since filled in their scene. Chris’ vocals are very strong, with his range reaching nearly the best performance he’s made to date. It’s the instrumentals that make some tracks especially weaker, laden with indecision over what the track was to sound like. The album does feature some incredible cameos such as Dani Filth of Cradle of Filth and it’s these feature tracks which make for some of the album’s best.

The Bottom Line:
– Listen to Reincarnate. From front to back, you’ll be bored a couple of times, but for the most part it’s a solid piece of work.

Noteworthy Track: “Puppets 3”
– The third installment in a song series called “Puppets” is a wicked track that features Dani Filth’s unique vocals paired with Chris Motionless’ commanding presence. It also represents the best of all the other musicians in the band, with Josh Balz lending a haunting electronic/choir mix over the emotional piece. 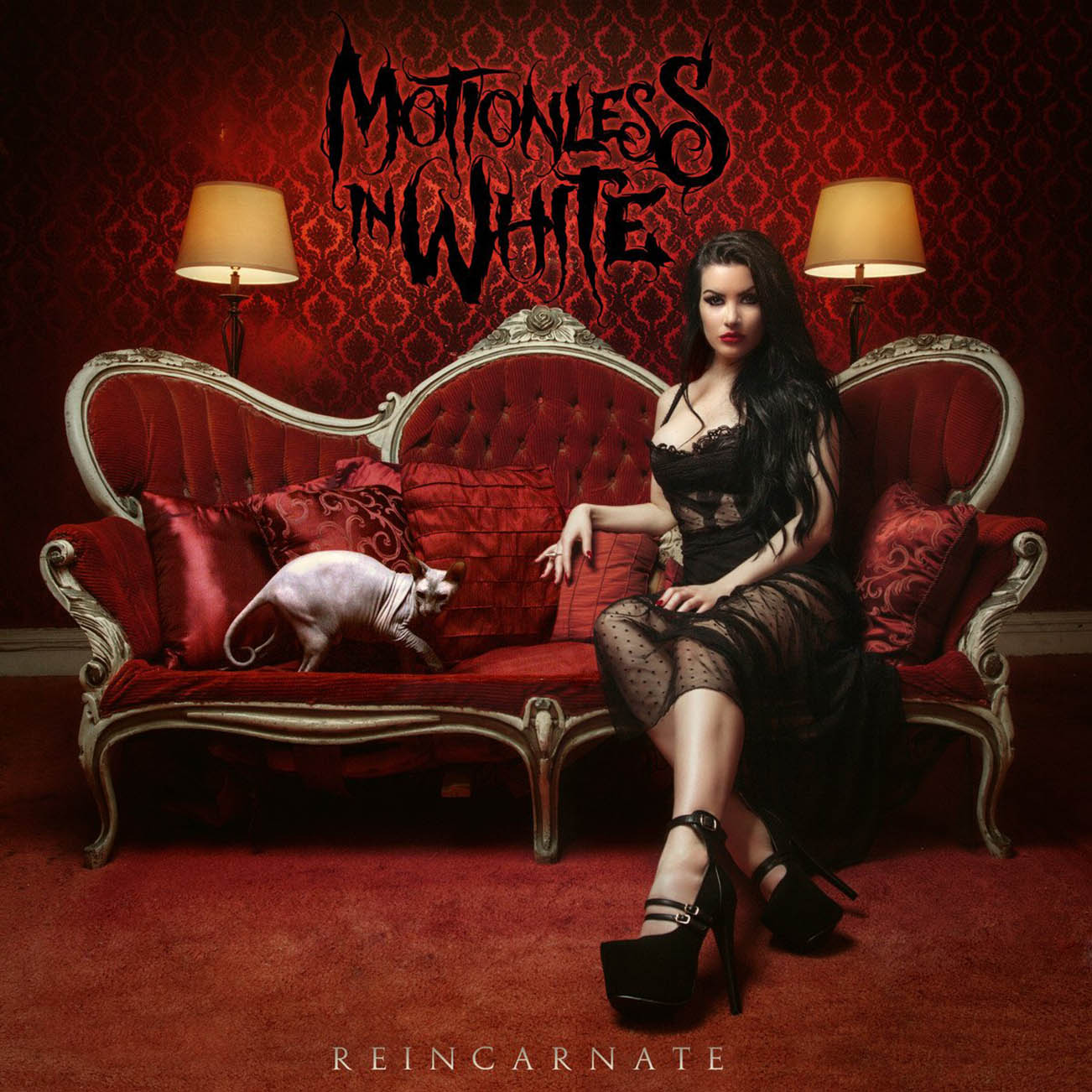 03. Infamous (2012, Fearless Records)
– The true beginning of Motionless’ industrial turn is an absolute shocker of an album. Fans were caught off-guard by the brand new sound that the band had, most notably Chris Motionless’ new Marilyn Manson-esque delivery. The instrumentals shifted as well, letting slow beats and haunting atmosphere dominate the sound. The imagery of the album is also a fantastic descent into the gothic glam that Motionless is now known for. It lands in third for a couple weak songs and an overall transitional sound that would have a hard time standing on its own. Its predecessors and successors lended their hands to its survival, but regardless, Infamous is one of the best releases the band has ever made.

The Bottom Line:
– These top three albums are all must-listens. Infamous will show you why Motionless in White sound the way they do now, and how they found a market for it.

Noteworthy Track: “America”
– The third song on Infamous is a political ripper that features Chris’ new vocals, old vocals, and commanding presence coupled with the new instrumental sound. The music video is wicked, too. 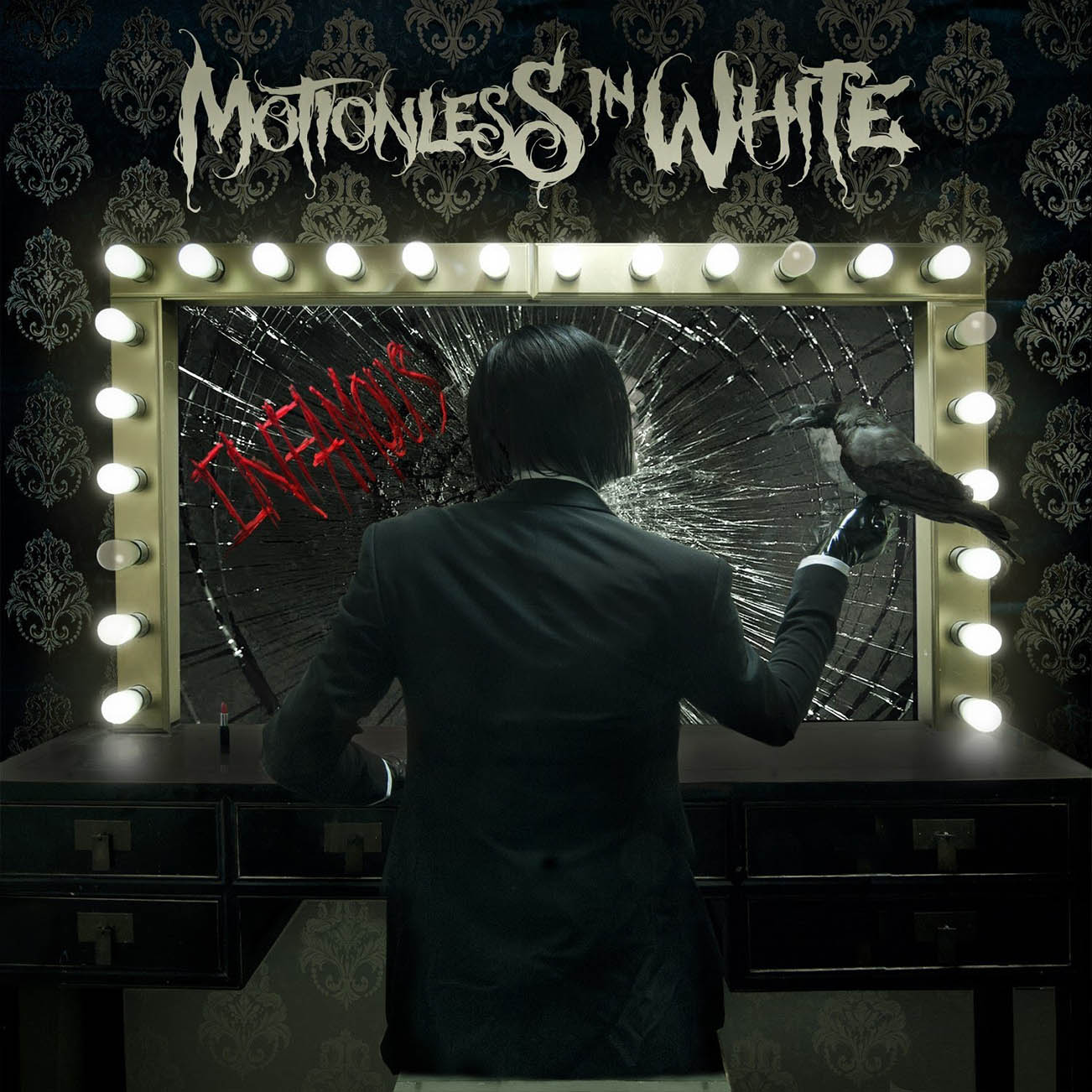 02. Graveyard Shift (2017, Roadrunner Records)
– The latest release from Motionless in White is the purest example of Motionless’ new face. Through all of their previous albums, Graveyard Shift is what they’ve been working towards. Combining every sound, and all the range that the band has demonstrated, their sixth album is the culmination of their craft. Chris Motionless displays a diverse cast of vocal qualities across radically different tracks, like “LOUD (Fuck It)” and “Eternally Yours”. The latter is currently their most popular song on Spotify, and has quickly become a fan favourite. The vocals are supported by an intense, dark series of chugging breakdowns, atmospheric synth hits, and rock’n’roll-inspired drum beats.

The Bottom Line:
– Graveyard Shift has songs for the rock fan, the gothic industrial fan, the metal fan, and everyone else too. A triumph of diversity, Motionless knocked it out the park with their latest.

Noteworthy Track: “Rats”
– The first track on Graveyard Shift introduces the listener to what the album is about. A combination of everything that’s going on within the track list, “Rats” is the perfect host to a solid album. 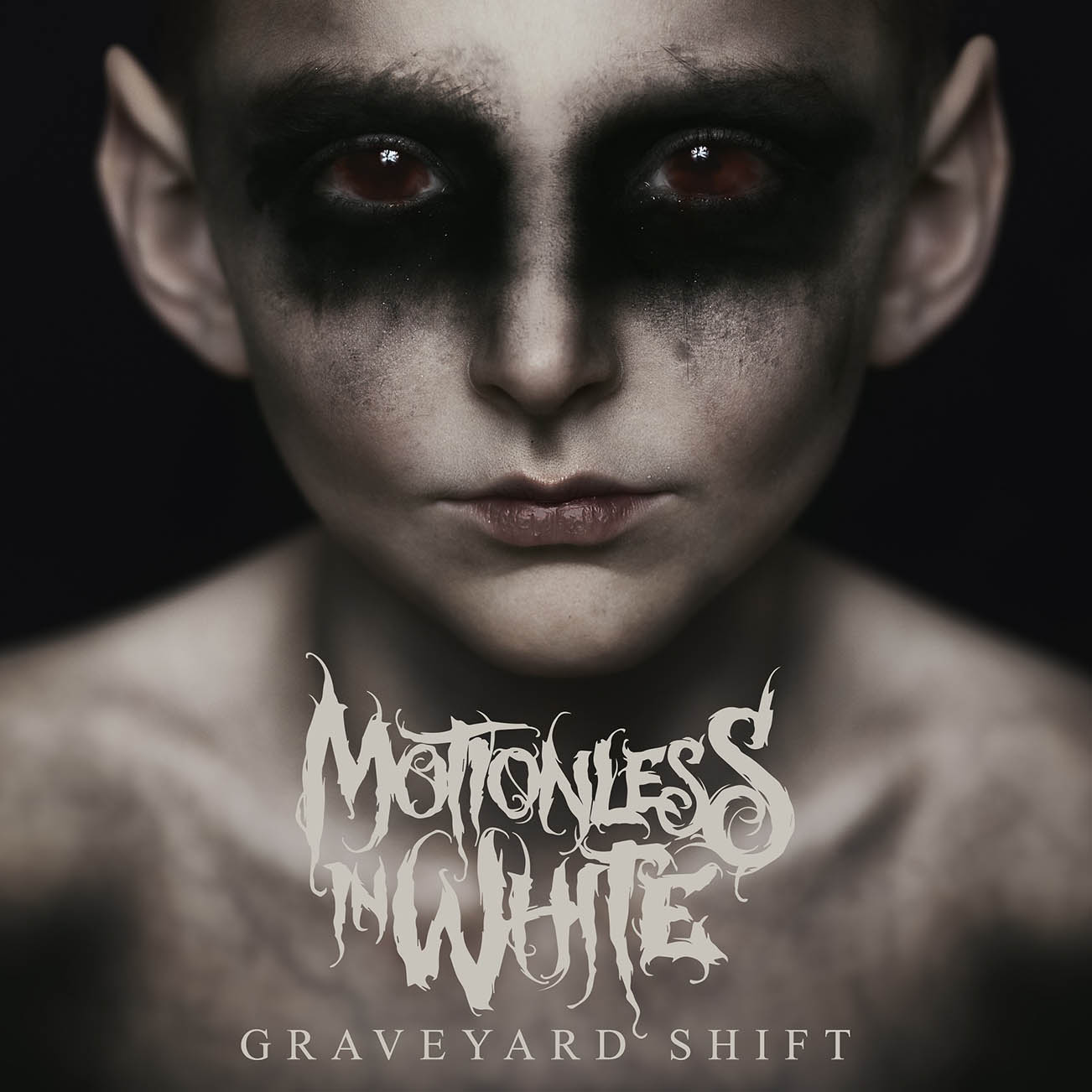 01. Creatures (2010, Fearless Records)
– The ultimate experience of Motionless in White is well-deserving of the number one spot. Creatures is the first full-length released by the band, and is from front to back, an absolute masterpiece. Not a single song is a letdown, and every song is a creative triumph in its own right. The titular track, “Creatures”, is a song written entirely by the fans, save for the chorus. Three of the songs on the album – “.Com pt II”, “City Lights” and “We Only Come Out At Night” – are remakes of songs of the band’s first two EPs. Most of the other tracks are based on books, movies, religious protests, or serial killers. The content of the tracks on this album is far and away the best in Motionless’ career. While the group hadn’t started its journey into industrial very much with Creatures, this release is the best of what they were before. Chris’ vocals are way more powerful than they were on When Love Met Destruction. The instrumentals are so much heavier, cleaner, and mixed much better. It seems that Creatures was also when the band really let keyboardist Josh Balz seize full control over his contribution to the tracks.

The Bottom Line:
– Creatures is the single most important part of Motionless in White’s history, and is also one of the best metalcore albums of the 2010s. There may never be another album like this one, seeing as how much Motionless has changed, but that’s okay. Creatures will always stand alone, and will always be worth listening to all the way through.

Noteworthy Track: “Immaculate Misconception”
– While I would wholeheartedly recommend you listen to Creatures in its entirety, the first song on the album is so powerful, both in sound and message, that it has to take number one. 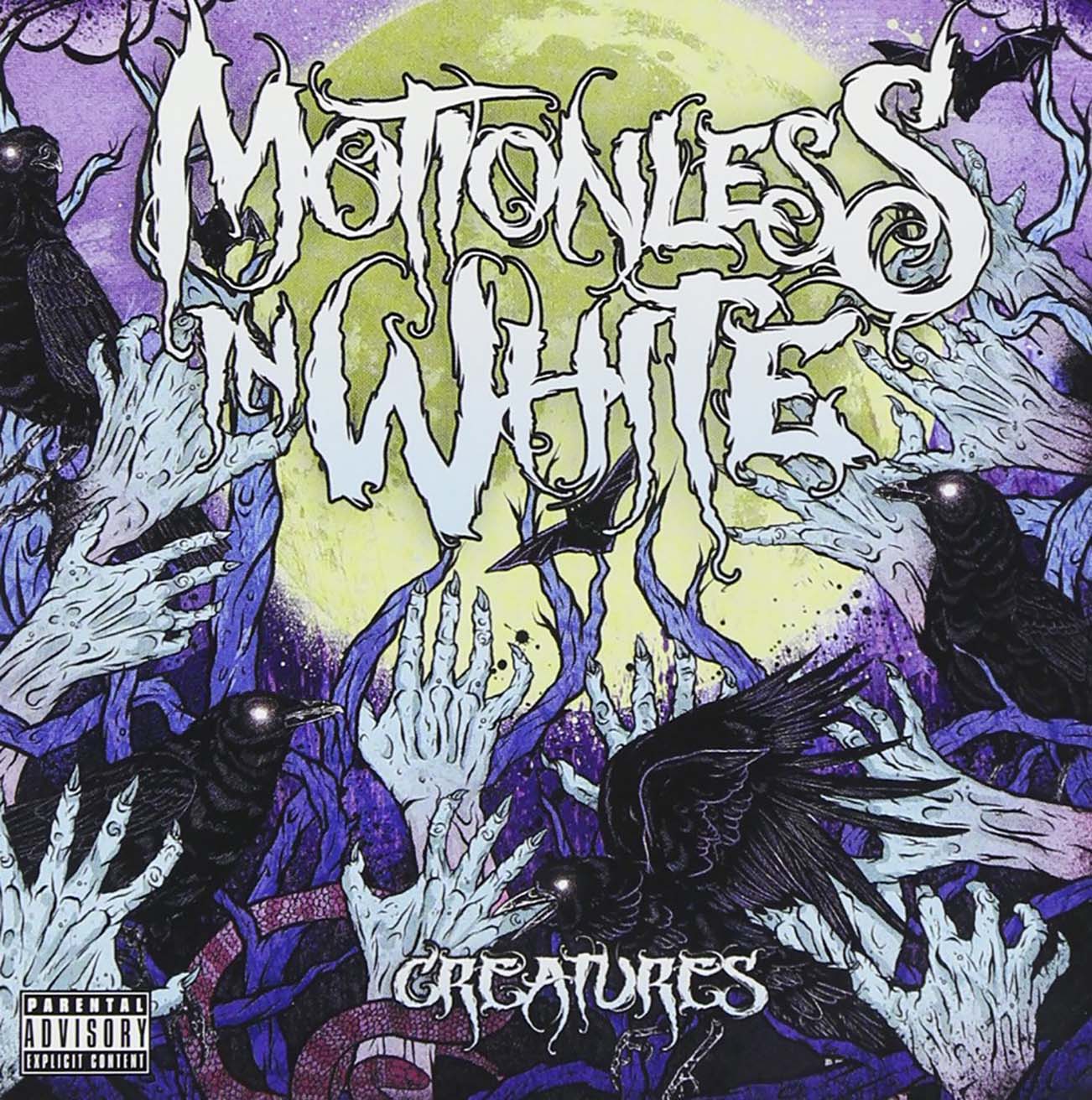 So there it is. Motionless in White has evolved so much in the thirteen years they’ve existed, and every step of the way they’ve had something gold. Each of their six albums has something different to offer, and the best among them are some of the best in the entire scene. If you want to hear any of their albums live, the “Graveyard Shift Tour” is currently running until March 25th. 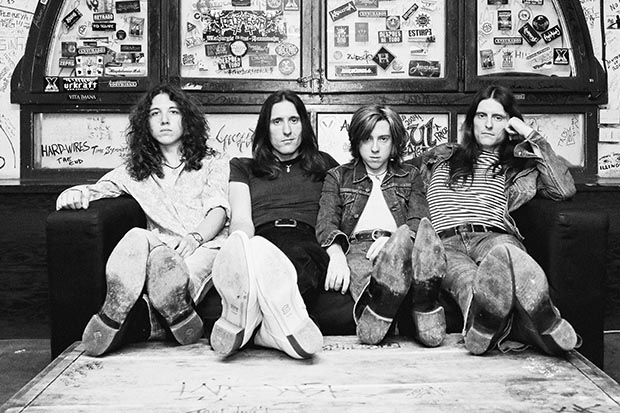 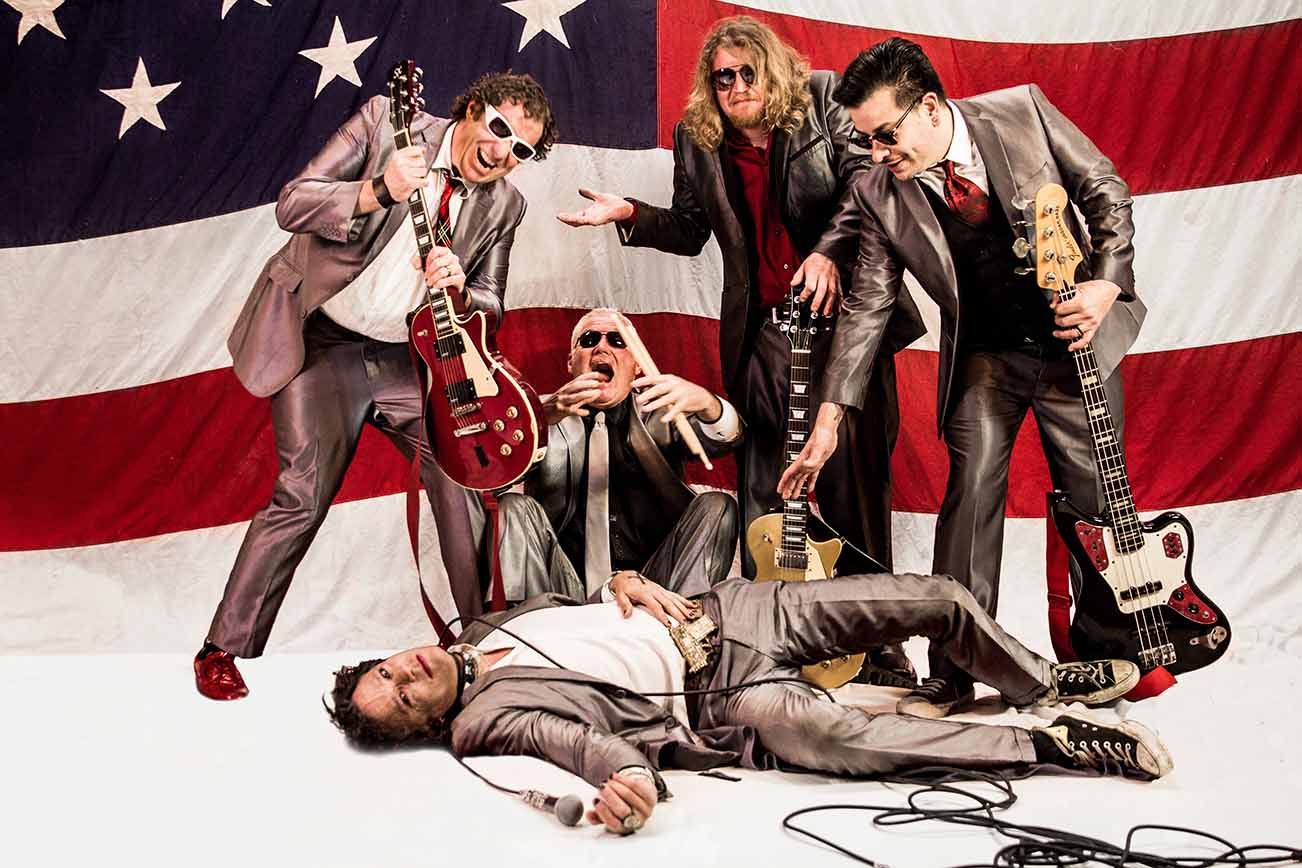