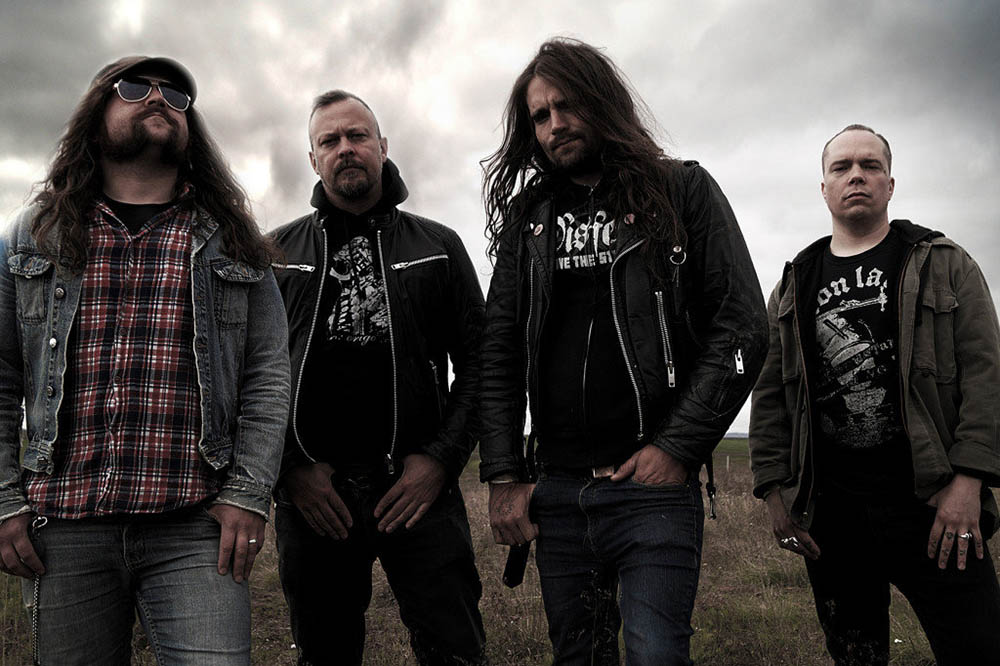 Every day, so-called tastemakers in the arts industry get on their high horses and bray at the top of their lungs about the next big thing. And as followers of what we’re passionate about, we’re subjected to a barrage of entities forcing the next so-called revolution not just onto our radars, but down our throats. It happens more so on the mainstream side of the entertainment universe when it comes to must-see TV, blockbuster cinema and culturally poignant art exhibits. If you ever get a chance to dip into the horror show that is my email inbox, you’ll quickly note how each and every day I’m on the receiving end of a couple hundred emails telling me how so-and-so band and their so-and-so new album is going to flip the world’s script and change the face of [insert genre of music here].

Perhaps it’s because I grew up in a household where my father’s favourite justification for trying to get me to do anything was yelling “because I said so!” that my exploration and curiosity has evolved into one employing high-grade cynicism filters. I’m not just going to take someone’s word about something just because they say so. A lot of my suspicion also has to do with a life surrounded by public relations pitch(wo)men perpetually going on about how so-and-so is going to revolutionise the world of metal/hardcore/etc. only to have the apple of their eye (read: they who sign the cheques) be a very dull rotten core festering at the bottom of an even duller compost heap. In this day and age of click bait sensationalism, the art of thoughtfully taking one’s time to back their claim is a lost one. You see the dearth of it in everything from politics and morality all the way down to the realms of underground extreme music.

To wit, I had an idea fall off the hamster wheel: what if I were to go in the opposite direction of hyper-justification of a claim? Not just make a proclamation and stand behind it, but lay out all the reasons for taking that position in the first place and do it to a point that teeters on the brink of obnoxiousness. And here we are.

Recently, Sweden’s Martydöd released a split 7” with Neolithic, a death/grind quintet from Baltimore. Neolithic’s side, entitled “Inner Adversary,” is a viscous blast of tank brigade metal that melds the worlds of Bolt Thrower, Hail of Bullets and Napalm Death with smidges of tri-tone eeriness and black metal. But it’s Martydöd’s “War of Worlds” which truly took me aback. Very few songs give me goosebumps. Even fewer give me goosebumps every single time I listen to them. “War of Worlds” sunk its hooks into me from the first spin and hasn’t relented with the many subsequent spins that have followed. There might have been a better song written already this year, but I haven’t heard it. You might think “Inner Adversary” is superior, but you’d be wrong. There might be a better song to come as the year progresses, but probably not. There’s a good chance very few of you will agree with the estimation and dissection to follow, but that’s your prerogative. And loss. Dummies.

First, a bit of background. Martyrdöd hail from Gothenburg and formed in 2001. Listening to the band and you get the sense that exposure to all the subgenres for which Sweden has become renowned were ingredients in the creation of their sound. At its heart, classic punk bands like Skitsystem and Anti-Cimex nudge through the curtains most, but there are elements of hardcore, HM-2 powered Swe-death, melodic death metal and that uniquely Scandinavian progressive take on crustcore and D-beat. Earlier albums like their Self-Titled debut from 2003 and 2005’s In Extremis even touch on first wave black metal (Bathory to a greater extent, Venom to a lesser). As the sands have fallen through the hourglass, the band has refined its sound with 2012’s Paranoia, 2014’s Eldop and 2016’s List offering up scads of melodic guitar duelling as an increasingly dominating layer a top that ever present crustcore base. Eldop is probably their most melodic and refined, List the rawest and loosest. This split with Neolithic is, as I understand it, a prelude to that band’s forthcoming debut EP on Deep Six Records. What it is for Martydöd is a stop gap leading into their next album which is set to be their first of three for Century Media. 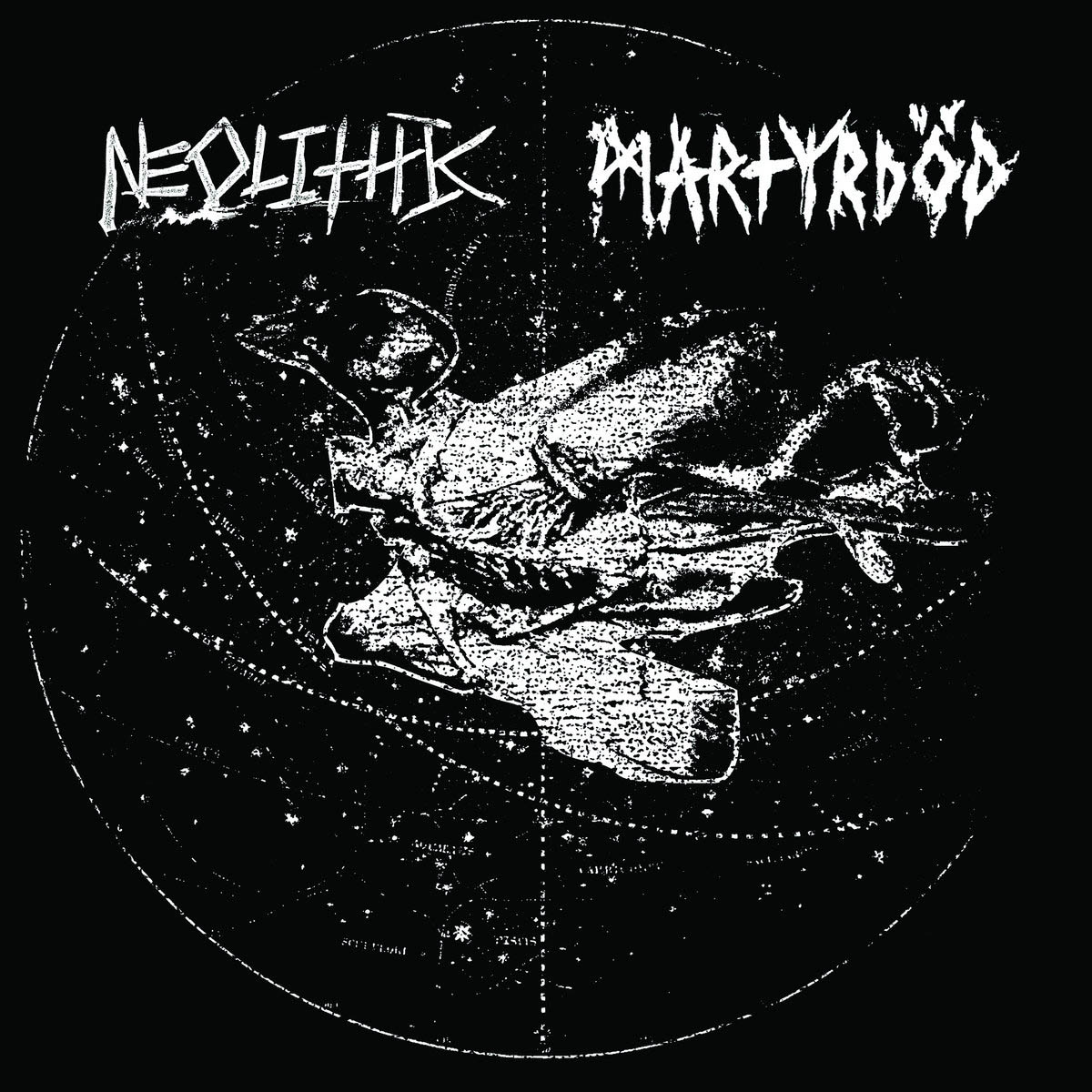 On to the song. “War of Worlds” is essentially a three riff sequence repeated twice. It’s a simple enough approach, very rooted in hardcore punk, and given its lack of traditional repeating verse/chorus structure, the sort of tune that would give conniption fits to those who write and co-write pop hits for radio. The descending intro chords are quick and easy and lead the way into a single note riff that sounds dark, doomy and creepy as fuck, but transposes exceptionally well into a chorded version at 0:16. The way the slight pinch harmonic carries the tempo change at 0:36, the second time as Mikael Kjellman starts singing is exceptionally nuanced. The manner in which they take the same series of chords and twist the mood by playing them both with palm muted heaviness and with an unshackled, more strummed attack between 0:18 and 0:48 is an old and simple trick, yet still masterful and effective.

The way the tempo gets jacked up and the riff follows suit at 0:50 is a first-rate swing with more pinch harmonics at 1:08 giving the change that little boost of life and a signal that a shift is happening. The melody that jumps in with the riff at 1:20 sounds like it was pulled from the school of Major Key National Anthem Writing (put your phone down, it’s not a real school). The see-sawing militaristic quality it possesses is engaging and the frenzied resolve at 1:28, with the help of more artificial harmonics, is a slice of counterintuitive awesomeness. Just like breakdowns and pick slides, pinch harmonics and squeals never fail to rouse a crowd. Their use in this song falls on the top end of sparingly, but still comes across very tastefully with an indicative air.

At 1:41 an ascending riff complemented by a triumphant pull-off melody and a subdued third guitar dishing out a layer of half notes emerges. This is probably my favourite sequence of the song; not only is the mail riff as infectious as a Level 5 Room at the CDC, but the guitar part totally rules with its reminiscing to everything from the New Wave of British Heavy Metal and early Metallica to Shrapnel Records shred and American hardcore super heroes, Tragedy. That the riff’s anacrusis is a tandem pick slide is like a mainline of caffeine to a vein already coursing with Red Bull. It takes ten seconds of wailing away before vocals come in. His barking may sound like they’re being spat out at random spots, not following the chord changes or having lyrical phrases land on the first beat of any bar. In fact, Kjellman is usually starting a vocal line in the middle of a measure and, along with the harsh staccato delivery tactic, gives what amounts to the song’s chorus a sense of urgency.

From there, the whole thing repeats again, with little bits and pieces of difference thrown in to boost the fact the second half is one giant repetition eventually directing to the song’s denouement. It’s during the second half that those familiar with Martydöd and drummer Jens Bäckelin’s playing on a good majority of List will be able to suss out the difference between his linear looseness on the album and the more vital performance here. His kick drum accents give the ominous parts a classic Earache Records feel and with the improved timing and playing of a style that doesn’t lean heavy on flash and fills, his driving back beat powers the song along. You gotta love how the cymbal shots match the palm muting at 2:44.

Most noticeably is the solo that comes screaming in at 4:19 during the repeated second half; it’s a deceptively dizzying combination of bends, hammer-ons/pull-offs, picking variations, trills and artificial harmonics all somehow tastefully injected into a span of 11 seconds before the legato, quarter note melody synthesizes with the fast pull-off part and the thicker guitars at the end of the showcase before blending in with that killer pull-off melody. A glorious multi-layered cacophony is the result. Some wicked overtones kick in at 4:50 at the hand of the pull-off guitars. Whether or not they were deliberate is beside the point, or at least should be, when the result is this awesome. The vocals again take a full ten seconds before kicking in and more of an urgency and race to the finish line feel is created when the layers of guitars keep getting piled on towards the end of the song as Kjellman’s daggers keep thrusting away.

So, there you have it: my exhaustive vivisection of what stands to be my favourite song of the year. Of course, I don’t expect anyone outside of Martydöd itself to agree with any of this. Heck, there’s a decent chance they wouldn’t agree with me. I can imagine their response to above being something like, “dude, you just spent more time coming up with all this hi-brow jibberish about something that took us 10 minutes to write and record.” But hey, we all have our subjective opinions; some of us are just more long-winded about them.