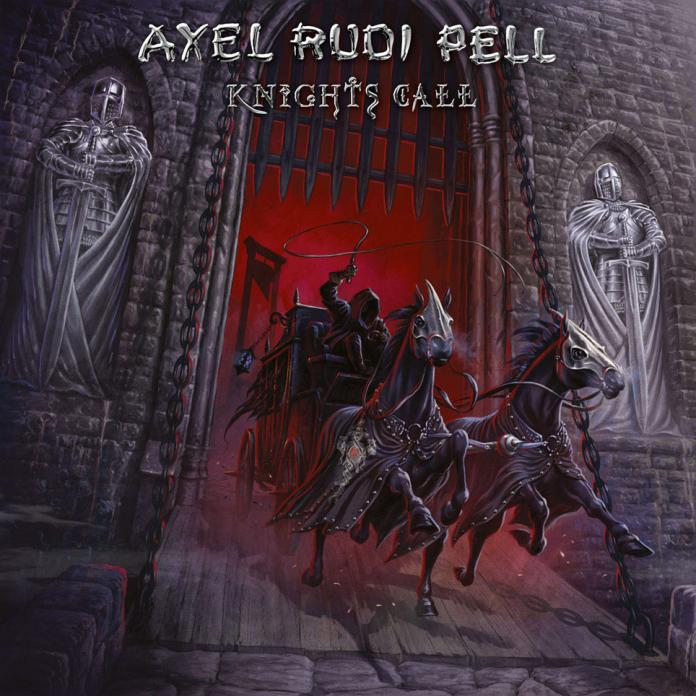 Even though talented metal guitarist Axel Rudi Pell just released his sixteenth album in 2016, the glorious Game of Sin, his next release Knight’s Call suggests there is no sign of slowing down for the 57-year old and his band of four, as they have been going since 1989. Unfortunately the axe-wielding legend has not achieved the same legendary status of Mötley Crüe or W.A.S.P., as his sixteen previous albums have only sold over 1.5 million units worldwide – a relatively low number for an artist with a career spanning almost three decades. However, by his own words in the press release regarding this album, he states “Why should I retire? As long as I can do what I like I’m the happiest guy in the world.”

Straight away, looking at the spectacular cover of a knight firing out of a castle’s portcullis on a carriage with black horses already gives an eye-catching first impression and fair indication of the style within. The artwork is just phenomenal, reminding me of the fantasy work from Chris Achilleos. The album starts with “The Medieval Overture,” a full-on 1:43 medieval instrumental to get the listener in the mood, before they are fired at full gallop into the rapid-firing “The Wild and The Young.” This album is just pure gold from start to finish, with stand-out gems like “Long Live Rock” and “Beyond the Light” – which recruits exceptional singer Pamela Falcon – to keep delivering the goods. With solid riffs, powerful guitar solos from the one and only Pell, tight production and stellar instrumentation from all band members – including exceptional bass sections from Volker Krawczak.

As the album blasts through the non-stop, 5+ minute treasures to befall the listener’s ears, it is easy to understand why Pell wants to carry on making the music that he does. The market shows there is still a demand for power metal; with newer power metal bands such as Bloodbound and Iron Mask arguing the case for popularity, and fellow guitarists Yngwie Malmsteen and Joe Satriani actively shelling out releases with grand aplomb; there is no particular reason for Pell to stop doing what he and his band do, especially if they continue to do it so well. Whether one is an avid fan of this particular band, or maybe just a big fan of heavy metal or power metal in general, it would be difficult to understand why any heavy metal fans would ignore this release for any reason.

For a rating, I am going to give Knight’s Call a thunderous 8/10 – there is nothing much wrong with this release. So take a chance on it, and get prepared to be blown away.

Check out this Knight’s Call teaser below.