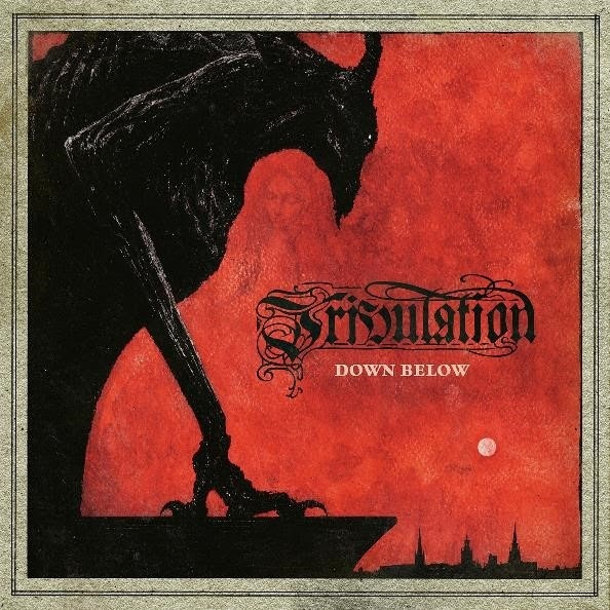 Tribulation – “Down Below” [Album Review]

I fear I came late to the Tribulation table, only discovering this Swedish four-piece in 2015 with their Children of the Night album – but better late than never. “When Strange Gateways Beckon”, off that record, warmed my 90’s goth heart to no end and their latest release, Down Below, is doing the same – in spades. While their 2009 debut full-length, The Horror, was full-on horror-themed Swedish death/thrash in the line of Repugnant [1] or Entombed, this latest album is a gorgeous throwback to the likes of late-90s goth rock revivalists Dreadful Shadows [2] or The Merry Thoughts, albeit a tad heavier: the clear guitar melody lines, the driving rhythms, the growling, yet still audible, vocals – it all adds up to a grown-up, harder take on gothic rock [3].

What sets Down Below apart from all these comparisons, however, is the accomplished songwriting displayed: while most late-90s goth albums would generally have one or two stand-out singles, entire albums tended to fall flat, fading into melancholic monotony. Down Below, however, stays listenable and engaging throughout – despite following a similar structural approach on the majority of songs, each stands alone as a delightful holistic composition. In general terms, guitar leads provide introductory melodies that set the theme (albeit “Subterannea” breaks the mould with a piano introduction) and these then evolve into full-fledged rock anthems loaded up on Penny Dreadful horror tropes.

The guitar tone is crisp, the drums subdued, but with enough in reserve in each case to blast out some serious metal moments – usually when Jonathan Hulten veers off on an on-point, yet never overstated solo, completely worthy of his glam demeanour [4] and illustrated perfectly on tracks like “Lacrimosa” – my top pick for the record. Bluesy fills (such as the double-stopped bridges in “The World”) are a welcome change in register, keeping things exciting and dynamic. The mid-album instrumental, “Purgatorio” provides a minimalist, sparsely populated breathing space, but the background sounds are anything but soothing: in fact, the effect is one of malevolence and menace, barely contained and just begging to be unleashed on follow-up “Cries from the Underworld”.

While Tribulation have definitely moved on from their death roots in terms of sound and aggression, they have maintained their fascination with doom ‘n gloom and matured as songwriters and performers: Down Below may seem, at first glance, to be a continuation of what they started on Children of the Night, but it soon becomes clear that this album is an order of magnitude above this: small touches, like the chilling xylophone on “Here Be Dragons” show a sense of appreciation for and consideration of the subject matter coupled with intelligent composition that was only hinted at before. And while it may be argued that their ‘softer’ approach is more mainstream, it’s definitely not a purely commercial move. These corpsepainted hooligans are still not the sort of people nice girls take home to meet their parents and, four albums in, Johannes Andersson still hasn’t even flirted with clean vocals; we can only hope and pray to the darker denizens of the cosmos that he never does – his signature growls provide a snarling, disdainful backbone to the music without which the whole would fail. The monotony of his delivery may not be to everyone’s taste, but by treating his vocal performance as more of a rhythm instrument than a melodic one, the other instruments take on a more central starring role in the ensemble.

Thematically, as I have mentioned, Tribulation have stayed true to their roots, too – evoking Edgar Allen Poe and Bram Stoker at every turn. The Polidori tribute piece, “The Vampyre” on 2009’s The Horror is evidence of this. 2013’s The Formulas of Death continued this flirtation with gothic horror tropes, from the Lovecraft-inspired “Wanderer in the Outer Darkness” or the unsettlingly thanatophiliac love ballads “Spectres” or “Suspiria de Profundis”. Despite their radical shift in sound on 2015’s The Children of the Night, the prevailing motif was still one of graveyards, ghouls and gloom – as illustrated by the video singles from the album, “Where Strange Gateways Beckon” and “Melancholia” [5].

It’s rare – maybe even unheard of – for a black metal elitist to even consider other genres of music, but a childhood of occult and psychedelic rock followed by an adolescence crammed to the brim with gothic gloom makes the likes of Swedish rocksmiths In Solitude, Ghost and Tribulation a very welcome addition to my playlists. When the music is as well put-together and executed as it is on Down Below, there is no reason to even try to find fault: this album is an instant classic – melancholic, seething and downright beautiful. That said, the final result is near-perfect – but just a touch too clean; given the dark, dirty motif presented, it would have benefited from a bit less polish in the mix. Even though it does display the technical accomplishment of each band member in pristine light, this contrasts a little jarringly with the shadowed subject matter. Nevertheless, this may well be one of the best albums 2018 will see – and such an early release sets the bar very high indeed for other artists.

Down Below Track Listing:

Get a taste of the album with the video for the single “The Lament”.

01. An apt association, given guitarist Adam Zaars’ membership in this band since 2010.
02. Whose 1999 cover of Tanita Tikaram’s “Twist in my Sobriety” remains one of my all-time favourite cover versions.
03. This is not, however, my go-to record for explaining the similarities between gloomy metal and gothic rock: Demonaz’ 2011 solo album, March of the Norse is, for me, an obvious successor to the likes of Fields of the Nephilim in terms of tone, songwriting and atmosphere and a recipe I sincerely hope he follows on the upcoming Immortal album, scheduled for release this year.
04. His shampoo-commercial, guitar god performance in the newest video, “The Lament”, explains this comparison perfectly.
05. https://www.youtube.com/watch?v=TNZgqxAxaj4 and https://www.youtube.com/watch?v=NgyxzCLEP50 respectively.