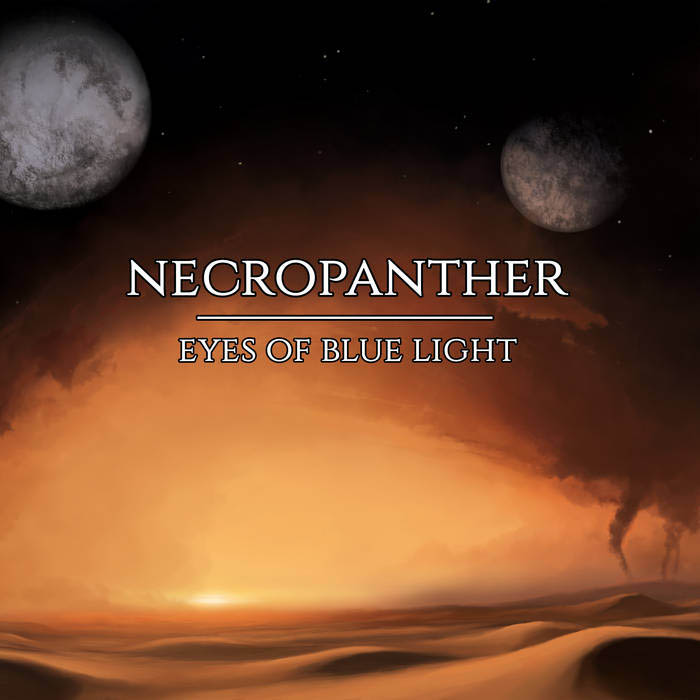 Denver’s Necropanther based their first album (Necropanther, 2016) on The Terminator movie, and with their second they’ve gone for another concept project – this time taking on the classic sci-fi novel Dune. Necropanther play melodic death with thrash and power metal influences, and a highly technical style. All of this lends itself very well both to sci-fi and to ’80s nostalgia.

There’s a real sense of story-telling to Eyes of Blue Light, essential for a concept album to work. From the opening “Imperium Overture”, the band take us on a journey through the world of Dune, from “Gom Jabbar” (the poison needle tipped with ‘meta-cyanide’) to “Fedaykin” (the Fremen death commandos) to the final instrumental outro “Strange Gods”. Necropanther provide plenty of variety in tone and pace; for example two vocal styles in “Feyd-Rautha” to simulate a movie scene. The songs are laden with irresistibly catchy hooks which are cleverly placed in the song structures.

Eyes of Blue Light was mixed and mastered in Gothenburg by Fredrik Nordström (Dimmu Borgir, At The Gates, In Flames, etc), and it’s that sweet lead guitar tone and slick production typical of the Swedish melodeath master that dominates. There’s a hint of power metal too, but for those less drawn by these aspects it’s no problem, since the high register melodies and bombast are balanced out with plenty of heavy riffs and blast beat sections. Tracks like “Shai-Hulud”, about the iconic giant sandworms of Dune, are definitely more on the heavier death metal end of the spectrum. The raspy vocals recall Skeletonwitch, Children of Bodom and The Black Dahlia Murder, with plenty of expression and a touch of humour.

Despite the impressive technical precision and fretboard wizardry, my favourite part of this album is the slowed-down beginning to “Water Of Life”, which was cinematic in scope. Necropanther making no secret of their love for Eighties films, in fact the whole album plays like a movie soundtrack. The band are by no means the only metal act to be inspired by Dune; there are numerous examples, notably Iron Maiden who wrote “To Tame A Land” based on Dune, but were denied permission to use “Dune” as a title – Frank Herbert’s agents stating that the author “does not like rock bands, particularly heavy rock bands, and especially bands like Iron Maiden.” So it’s unlikely that Frank Herbert would have appreciated Necropanther’s homage either. But it’s very timely for Dune fans, with a re-make of the classic movie scheduled for this year. And you don’t need to be a Dune fan to enjoy Eyes of Blue Light. This album is top-tier melodic death metal.

Get a taste of the band’s new album via the single “Imperium Overture”.