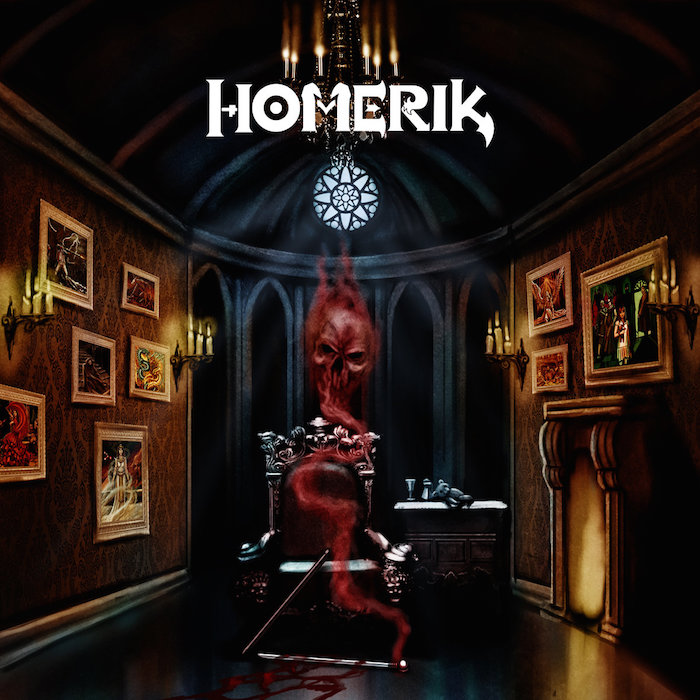 For most of us who have spent considerable years immersing ourselves in metal – especially that of the underground, extreme variety – it can be harder and harder to come across something genuinely surprising. It’s only inevitable; most musicians will only push boundaries so far, all too aware that, if a record can’t be easily described with a convenient “For Fans Of…” tag, it can be lost amongst the noise of constant daily releases. It’s this context which makes the self-titled album from Homerik all the more notable. The band can be described, with some reasonable accuracy, as symphonic progressive death metal – a tag which paints them into a narrow corner. But in truth, no genre tag can do justice to what the band have created. This album is as ambitious, creative, and genre-defying as any I have come across within the broad church of metal.

A host of comparisons came to my mind upon early listens of the album, chiefly: Nile; Orphaned Land; The Lord of the Rings soundtracks; Behemoth; and the opening theme to Neon Genesis Evangelion. Homerik is nothing if not wildly eclectic, shifting from grandiose operatic female vocals to pummelling death metal brutality in seconds. Tracks such as “An Angel of Darkness” are as vast and epic as the loftiest of high fantasy novels, filled with hints of forgotten histories and cultures, all filtered through progressive, technically-minded death metal. With so much going on at any one point and so many ideas contained with a single song, it can feel overwhelming at times; but there’s always moments of (relative) calm to help prevent that, such as the small break at the two minute mark of “An Angel of Darkness”, or the way that “The Balance of Power” slowly builds its opening up over the course of a minute.

The album is at its best when the band let their creativity and ambition run riot. “Curse of the Black Nile” demonstrates this best, with its vast instrumentation, shifting structures, and undeniable energy. It’s here where the band make best use of restraint, with the gentle movement that finishes the introduction being very effective, when expectations are that the song would instantly go in to a moment of heaviness meaning that when they do launch in to the following Behemoth-esque bludgeon, it’s all the more effective. Yet when the soaring female vocals kick in, a version of old 90’s anime opening themes come to mind, albeit one that has been twisted by extreme metal. The result is so unexpected, and so gloriously fun, that it’s hard not to break out in to a huge grin at it.

It’s far from the only moment that is filled with a sense of fun and enjoyment, with “The “Ire of Green” being propelled by jaunty melodies and rhythms that bring to mind pirate metal; whilst “Wendigo” opens with tribal drums that owe more to African Burundi drumming than, say, Sepultura’s Roots. Yet there’s plenty of darkness here too, especially in the second half of the album, once “Wendigo” transforms into a bleak, groove-driven form. The dramatic violin hits during the oppressive “The Balance of Power”; the mournful melodies of “Bread and Circuses”; and dramatic opening to “A Song of the Night: Part I” all tell of a darkness, with the narrative of the album being conveyed as much by the tone of the music as it is the actual lyrics, which tell a tale of ancient and personal demons, world-shaking battles, and social revolution. The songs reference ancient Egyptian mythology and Shakepeare, as well as the typical biblical demons, and combined with the huge sound of the record, it makes Homerik feel like an album that is larger than life; a vast, multi-novel series that spans eons told over the course of a single recording.

With so much packed in to each song, it would be no surprise if many listeners found Homerik to simply be too much to take in. There are so many musical styles used here, so many different instruments, melodies, movements and moods, that it is a difficult album to get a handle on during early listens. That early thrill of joy at the sheer absurdity of such a grandiose, ambitious album will remain, though, and repeat listens lead to details being picked out, giving the album staying power. It might not be a release that is easy to slip into the groove of – and you certainly need to be in the right kind of mood for it – but even if it doesn’t instantly click with you, it’s hard not to be impressed by the sheer ambition, and absolute no-fucks-given, we’ll-do-what-we-want attitude on display throughout. Homerik makes most other albums seem tame, and there are few higher plaudits to grant an album.

This review is part of a series focusing on ReverbNation artists. Check out Homerik’s ReverbNation profile here.

Get freaked out with the band’s “A Song of the Night: Part I” music video.