On Sunday, February 18th, Harm’s Way rolled into Toronto for the second date of their “Posthuman” headline tour, featuring Ringworm, Vein, and Queensway. Fans lined up outside Sneaky Dee’s before doors opened to pack this venue to a sold-out capacity.

Having already put out one of my favourite albums of the year so far (read my review here), I was excited when Harm’s Way took the stage and delivered a crushing set. For 45 intense minutes, the front of Sneaky Dee’s was a war zone of bodies colliding, aggressive energy from both the band and the audience, and spot-on performances of songs new and old.

Before the show, I had a quick chat with Harm’s Way drummer Chris Mills about Posthuman’s reception, signing to Metal Blade Records, the state of hardcore, and their current headline tour. The audio file is included above if you’d like to listen via Soundcloud.

Cover artwork for Posthuman, the newest release from Harm’s Way. 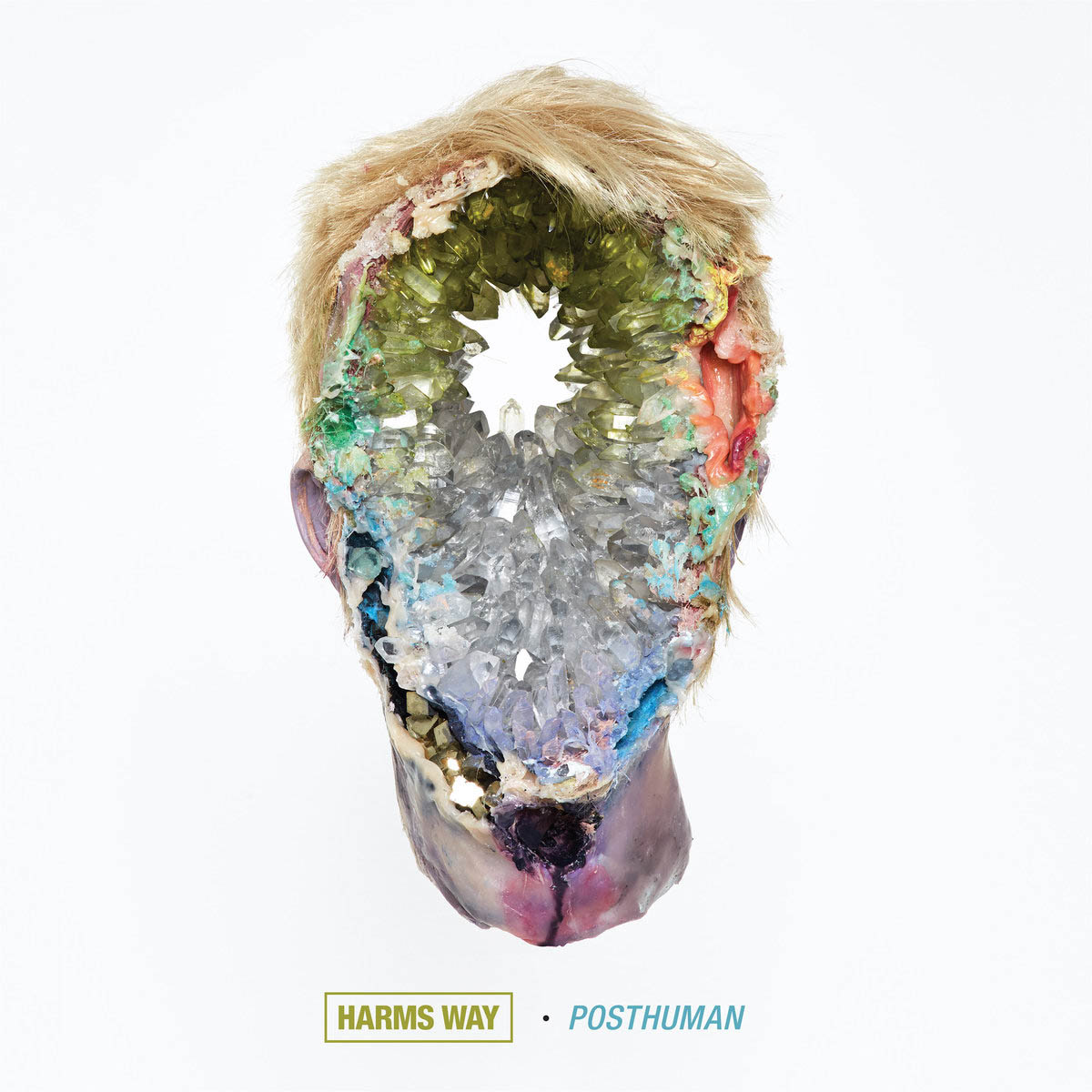 It’s Sunday, February 18th. I’m sitting here with Chris Mills, drummer of Harm’s Way. They’re about to play a sold-out show at Sneaky Dee’s here in Toronto. Thanks for taking the time to do this interview.
Chris Mills: Thanks, happy to be here.

You just dropped Posthuman over a week ago on Metal Blade. How’s the response been to that so far?
Mills: The response has been overwhelmingly positive I’d say. Reviews have been cool, getting on the radar of a lot of people and outlets that we, in years past, maybe weren’t on their radar so to speak. Like I said, the reviews and feedback have been overwhelmingly positive. Streams, downloads, and record sales have been really great as well, better than probably any record we’ve done in years past. So far, so good, and now we’re on our first support tour for the record, and two days in, like you said, we’re at Sneaky Dee’s tonight Toronto, and we were in Cleveland last night and it was great, so we’re just trying to ride this wave of positivity and trying to just move forward with the record.

That’s good to hear. Speaking of Metal Blade, you signed with them for this record. What made you decide they were the right fit and the right label for Harm’s Way going forward?
Mills: A lot of that came just from meetings and relationship building with the label. Seeing eye to eye on the vision for the band, our short term and long term goals, and overall how the label runs we were pretty psyched on. So through conversations, through meetings, we were able to see eye to eye on having a common vision for the band, and we were in a place where we were trying to figure out how to help this band continue to grow and how can we continue to connect with as many people possible. And obviously Metal Blade has been a staple in heavy music and aggressive music for a number of years now, and it just seemed like a good home for us to continue to grow and connecting with people.

That’s great. So you talked about getting on the radar of press and publicity, and I have this question: Hardcore has always been active and alive as a genre, maybe it comes and goes in terms of popularity, but as of late there’s been more recognition and a spotlight for hardcore bands. Whether it’s big labels signing bands, bigger metal bands taking hardcore bands on tour, or even, more recently, Grammy nominations for Code Orange, and even 10 years ago with Hatebreed [being nominated]. Why do you think there’s this spotlight or recognition that’s coming back for hardcore at this time?
Mills: It’s interesting. I think big business in the music industry goes in cyclical waves of trying to find the next big thing. Like you mentioned, Hatebreed got a nomination 10 years ago, we saw in the early 2000’s bigger metalcore bands getting on the radar of mainstream music. I think in some ways, mainstream music and the big music industry are trying to find what’s going to be the next big thing. What can they grab on to that will get people interested again in real music, and I think bands like Code Orange, Power Trip, Turnstile, bands doing real things and creating real music, having this huge following without pre-big labels entering the picture for them, just appeals to suits so to speak. I think they see the realness, they see how captivating hardcore, punk, and aggressive music can be, and they’re just trying to grab onto that.

I think its continued to come and go in waves, and historically, that’s been proven. But I think it’s awesome, these bands are creating real music and real dialogue, and if that’s going to connect with larger society, and mainstream music industry that’s cool, if that’s going to appeal to people and bring more people into the fold to cling on to something real, and to start to think more critically about their choices and where they’re at in the world and whatnot. I think that’s a cool thing. Even for us, its been an adjustment. We’ve been doing a lot of crossover stuff, we’ll see where it takes us and it’ll be interesting to see one, two, three, four years down the line where things are still at, as far as punk and hardcore and even metal in mainstream music.

An example of a flyer for the band’s current headlining tour. 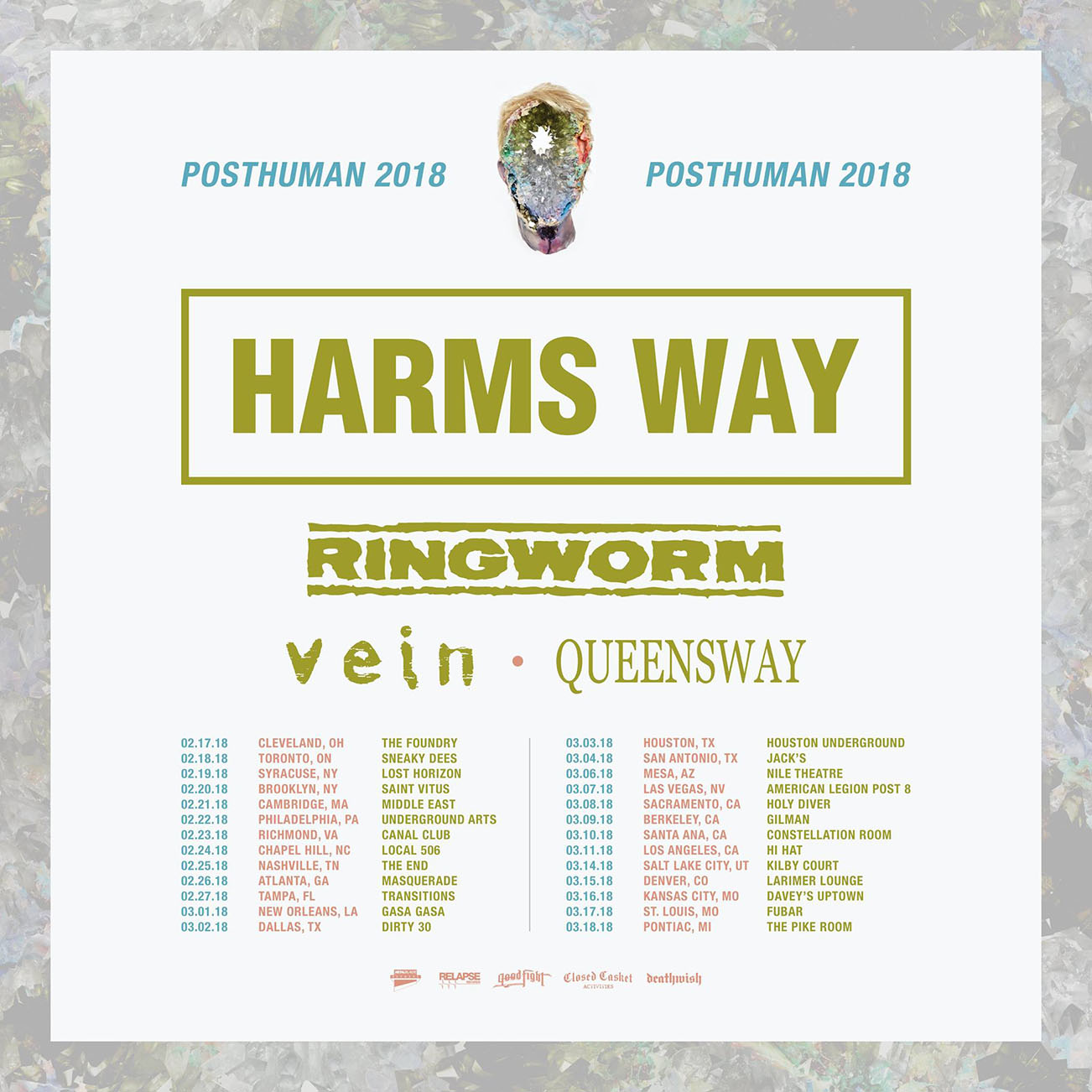 You’re doing your first headline tour in support of your album [Posthuman] right now. You’ve got such a good lineup consisting of Ringworm, who are legends in hardcore, and you’ve got the relative newcomers of Vein and Queensway. How’d this lineup come together? I know sometimes it’s purely a booking thing, but I tend to believe in hardcore, it’s more talked and planned about [between the bands].
Mills: It was very much that in us trying to build a bill [tour package] that we’re excited on. We feel that this bill really portrays the past, present, and future in hardcore music, and I think it has a lot to offer for anyone coming to the show. Ringworm is a band that we grew up on, [their 2001 album] Birth Is Pain and [1993 album] The Promise, those records are highly influential to Harm’s Way in our early days in the inception of the band.

All these bands, Vein and Queensway, two young bands that are doing incredible things right now that are going to continue to blow up, these are just bands that we handpicked because we feel like they’re important to hardcore and are also just inspirations to us as well. It was very much something that we put together, that we wanted to be proud of and excited to share with the United States on this tour, and of course, Toronto, to also just show something that captivates the past, present, and future of aggressive music and what we can potentially do moving forward.

So those are the support bands as part of the tour package. When it comes to Harm’s Way, what can fans coming to this show and tour expect from you guys from a headlining set?
Mills: Our headlining set is a diverse setlist, but it’s going to be Posthuman-heavy. We’re playing a headlining slot, it’s a little longer than a typical Harm’s Way set, so people can expect a diverse catalogue of songs being played, but it’s going to be pretty much Posthuman-heavy. We really focused on making sure on everything we’re doing with the live show is capturing what we did on the record, no shortcuts, just making sure all the samples are there, all the electronics are there, and just trying to capture the energy and aggression that people can find on our records.

After this tour, and for the rest of 2018, what’s coming up for Harm’s Way?
Mills: We’re doing Mexico after this headline tour, and then this summer we have some big plans in the works and I can’t speak on those yet, just for announcement purposes. We’ll be over the US again come this summer, doing a tour. Towards late summer, we’re hoping to get back to Europe to do some festivals and headline shows to continue supporting Posthuman. Come the fall, it looks like we’ll be doing a lot of support stuff for the record. A lot of crossover stuff. And just try and take it from there.

Before we conclude this interview, any shout-outs or bands you’d like to shine a spotlight on.
Mills: To Ringworm, Vein, Queensway, 3 bands that we’re super excited to be on the road with right now. 3 bands that we’re super excited on musically, and aesthetically. Shout out to Twitching Tongues, they have a new record coming out on Metal Blade in early spring as well. 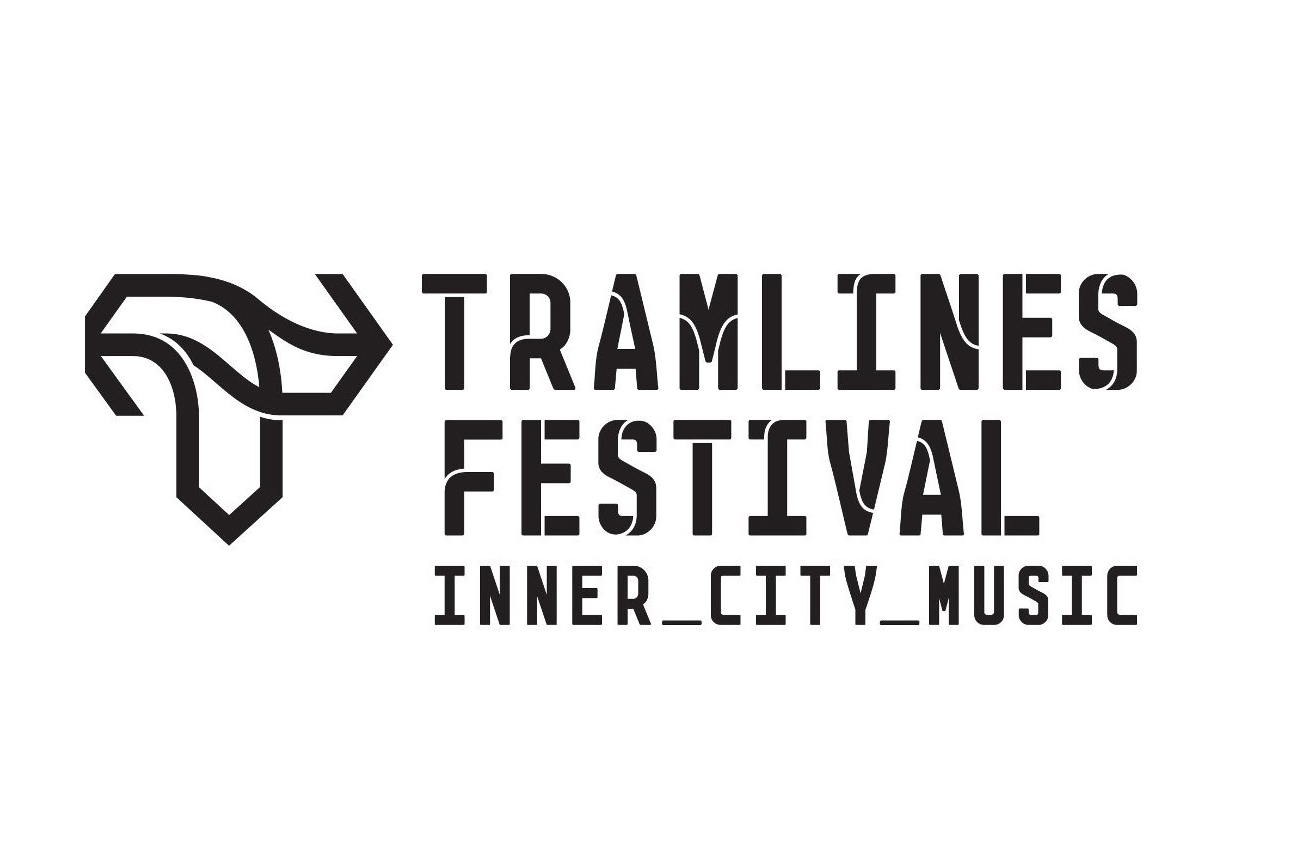 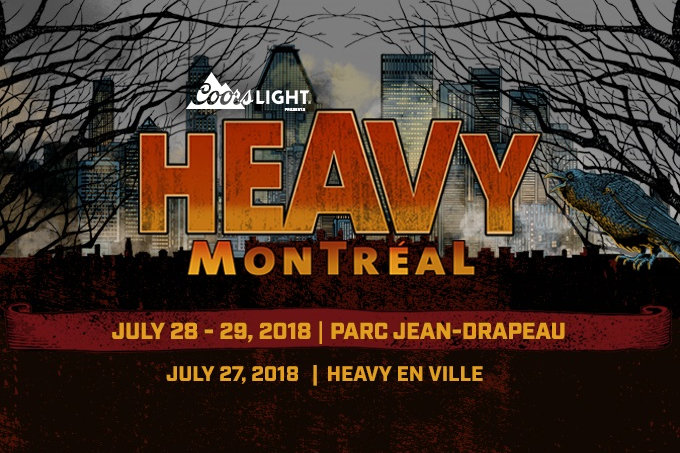