The Violent Femmes are that band. You know the one; they’re the band that music nerds mention and get sanctimonious about when their friends don’t recognize them (or at least they don’t think they do). They say things like, “the name sounds familiar…” and “maybe I’d recognize them if I heard a song.” So, you play them “Blister In The Sun”, and their eyes light up. “Oooooooh, THAT band. I know this band! I like this band!” This validates the music nerds’ smugness. Quick tip: Never give music nerds that kind of affirmation. It only encourages them.

Some musicians don’t like being that band. If you mention that song that makes them that band, they roll their eyes and give you… that look. The look that says, “yeah, yeah, that’s us. No, sorry, but I’d rather eat glass than to talk about that song for the millionth time.” Robert Plant called “Stairway to Heaven” a ‘Wedding Song’, Radiohead called “Creep” ‘Top 40 trash’, and the Beastie Boys said “Fight For Your Right To Party” sucks. That’s not to say these artists are one hit wonders – far from it. But when one hit flies above the rest, it can cast a shadow over the rest of their catalog. When you have so much to offer and the mainstream only remembers one part, some artists naturally get a little bitter.

But not the Violent Femmes. No, they’re too confident to play that card. Their new album, 2 Mics & The Truth: Unplugged & Unhinged in America, a live album compiled from radio station performances from their last tour, takes it head on. The double record opens with “Blister” and has Gordon Ganos providing commentary mid-performance. “Oh! They’re the guys! They do that song! Those guys do that? ….Yeah, we’re those guys.” 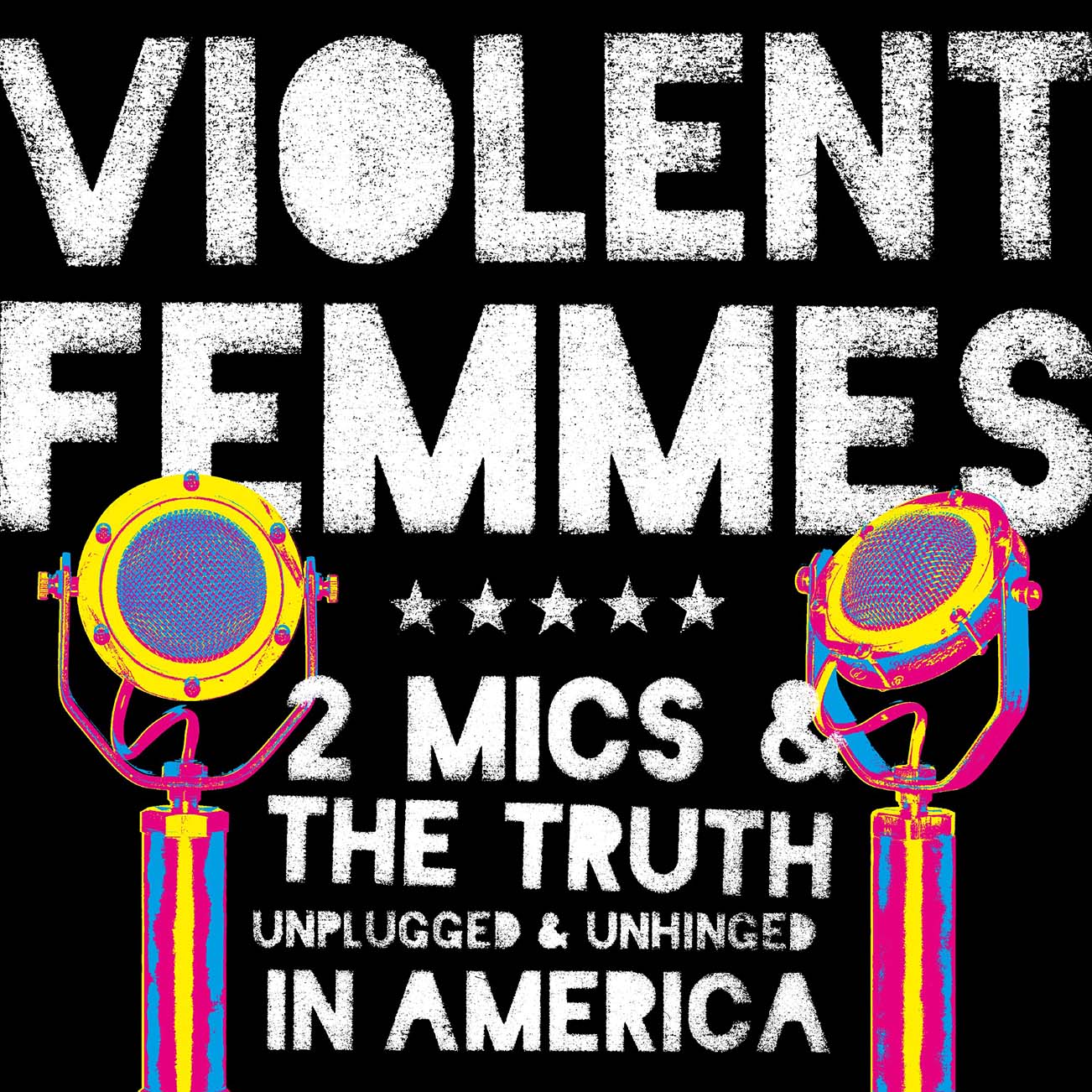 I spent my afternoon with Brian Ritchie and John Sparrow (’cause 2 outta 3 ain’t bad) while they were in Toronto supporting their new album at Massey Hall. We talked about the album, the band’s legacy, and reflected on Milwaukee.

When I stepped off the elevator onto Brian’s floor of the hotel, the distant serenade of a shakuhashi could be heard from down the hall (It’s a Japanese flute. I had to Google it too.) There’s an air of mystique when you’re preparing to meet someone like Brian – he’s basically a walking-talking Encyclopedia Britannica of rock history. He’s gone triple platinum, toured with Nirvana, and had a song gifted to him from Prince. I guess it’s only natural that there’s a flute luring me to his hotel room. Kinda like a siren, but with longer hair and more tattoos. As I shake his hand, he tells me, “you can ask me anything. I’ll be honest.”

The Violent Femmes have 14 albums (18 if you count the compilation albums). This is their 5th live album. With a dense and rich band history, sometimes the most effective way to approach music is to take a step back and simplify. “Recording technology has gotten to be so toothless and effete with people just piling on electronic track upon electronic track. They have no human element whatsoever. That’s not the kind of music we make. So, we took the opposite extreme and recorded it with only two microphones. It places all the emphasis on the performance.”

The band is known to celebrate the sound that only spontaneity in music can produce. The band has played every atmosphere imaginable, from busking the streets of Milwaukee to playing mega-festivals like Woodstock ’94 and Coachella ’13, but the personal and impulsive nature of playing in cramped quarters is what the album strives to capture. “If we’re in a hotel room together, or working out songs in a dressing room before a show, it’s like that. It’s an attempt to record that intimate way of playing.” It helps that percussionist John Sparrow typically plays on a Weber barbecue – setting up a drum kit in a hotel room can’t be easy.

Somehow, spontaneity is a bit of an understatement – fans of the band know that the band never builds a setlist, Brian gauges the crowd and gives the band the next song during applause. He took that approach a step further with the new album. “We’ve done thousands of shows, and we make the people feel comfortable. We never use a setlist, no matter how many people we’re playing for. It’s not like we’re dumping something on the audience. I knew we were planning on making a record from the recordings, but I didn’t really share that with anybody else, because I thought it was a way to get way more spontaneous and off-the-cuff performances.” Surprise! The Violent Femmes created an album with 2/3 of the band having no idea. And you thought your jam band was good at improvising.

Watch the band’s NSFW video for the song “Issues”

Having an album with a mix of their greatest hits and never-performed-live songs proves not just the versatility of the Femmes, but how well their unique sound has aged. “The first album was intentionally produced in a way that it would not reflect the times. It wasn’t current then, it wasn’t a throwback, and it wasn’t futuristic either. It was intended to be timeless.” This is evident when you look at the demographic of a show. Hell, the band was platinum before I was born, but here I am. “Our music still has some cultural currency with the young kids, especially the disaffected youth who feel like the raw energy of the music speaks to their mentality.” Hey, I’m a disaffected youth! He’s talking about me!

As I stand up to leave, I thank Brian and his wife. On my way out, I tell him, “it’s a shame I didn’t get the chance to chat with John or Gordon. I had lots of stuff prepped for them.”

Brian grabbed his phone and started rummaging around his desk. After a few minutes, he says, “alright, you know what John looks like? Meet him in the lobby in 5.”

Every musician grows up dreaming what it would be like to play in their favourite band. When I was 13, Canadian boy band duo Wave was my first concert… and they didn’t exactly push me towards a career as a popstar. When John Sparrow was 15, his first concert was a little more significant. “The Violent Femmes and the B-52’s. I immediately became a fan.”

John has the unique experience of playing for a band that he grew up listening to. Although he is considered the newest member of the band after joining the trio in 2016, his role in the band goes well-beyond the last year of touring. “Most people don’t realize that I’ve been with the band for 12 years. I was fortunate enough to play with all the drummers that have been part of the band at some point. I admit, I think about how surreal it is almost every day.”

Prior to becoming a member of the trio, John was a member of the Horns of Dilemma, the Femmes’ backing band. However, 2 Mics & The Truth is the first album John is credited as part of the trio. “I’m really proud of this album. I remember listening to the record before it was released, and for a moment, forgetting that it was me playing on it, because I wasn’t listening to me, I was listening to the Violent Femmes. it was everything I wanted in a band. This is the way I’ve always wanted to play. We’re all very proud of it.” 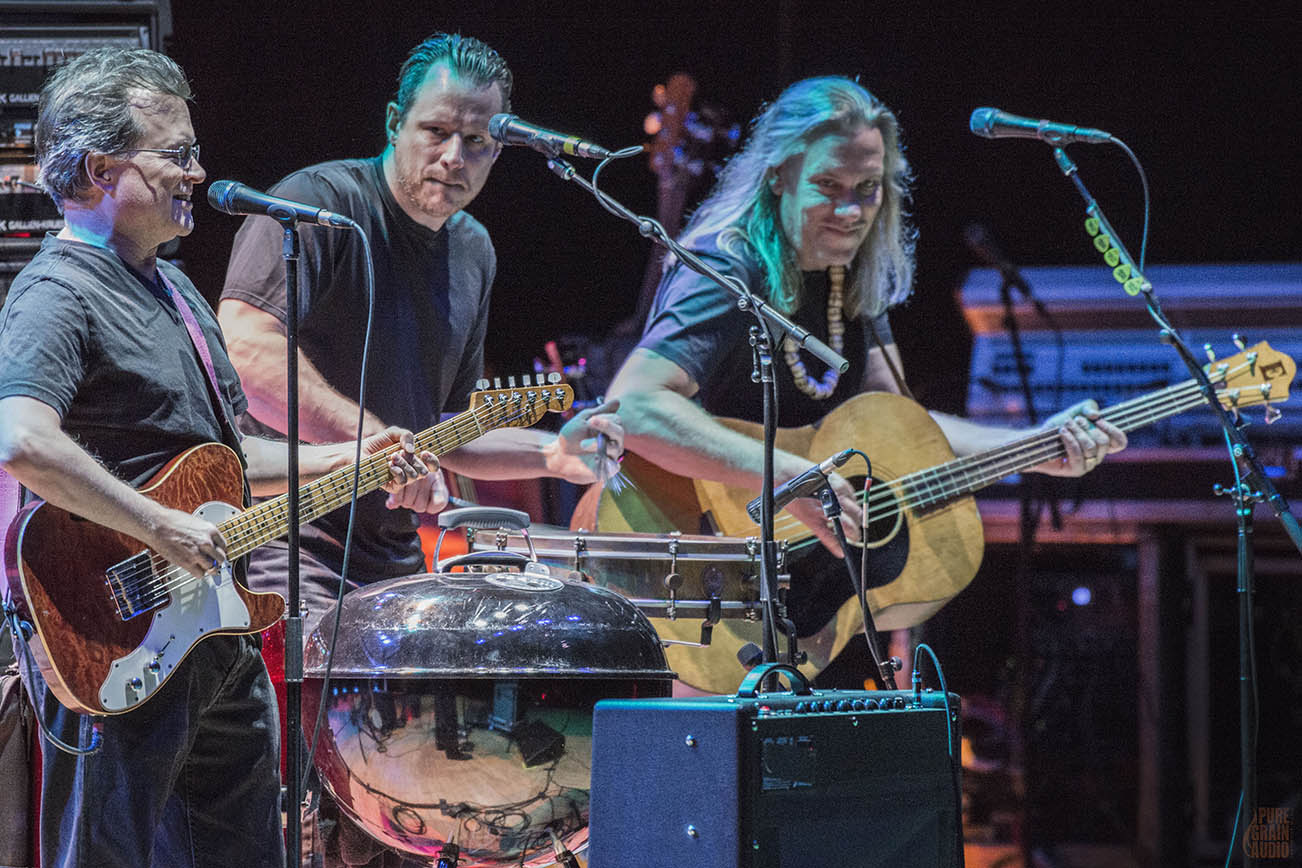 John has proven himself to be an essential part of the band. It takes a certain personality to navigate the stage with The Femmes – the lack of a setlist, the risks, and embracing the imperfections takes a musician far beyond what is needed talent-wise. It takes a person with confidence; a person who thrives in that unpredictable environment. You can see it on his face when I ask him about his performance on Stephen Colbert, and you can hear it in his voice when he describes his favourite song to play with The Femmes (It’s “Confessions”, for the record). You even notice it when you talk to him about his drum set: An 18″ snare, a floor tom, a BBQ, and a gong.

“I’m trying to think of where you could play a gong in a Femmes song,” I tell him.

“Funny you should say that. I’m usually thinking the same thing.”

John has the energy and the focus that is necessary to be in The Femmes. You start to understand where it comes from when you ask about Milwaukee. “Everyone was leaving for Portland or Seattle, and I stayed in Milwaukee. It didn’t take long before I started to notice everyone moving back. It was clear that people were running away from something or going to search for something that had nothing to do with the place. They thought maybe it was their city or their job, but they left to look for something that was always in Milwaukee, and I’m glad I always stayed.” It becomes quite clear that John’s approach to being focused yet spontaneous is what makes him such a strong piece of the band. “My goal is to play with them into the Rock & Roll Hall of Fame.”

As we finished off our beers, I asked him something a little too close to home. “John… What’s a Stallis poop-noodle?”

He raised an eyebrow. “…Who have you been talking to? I’ll tell you, but you probably don’t want to publish the answer. It’s pretty gross.” He was right.

The thing to remember about seeing the Femmes live is that they practice what they preach. They’re the real deal. They follow their own golden rules. There’s no setlist, there’s no massive introduction. It’s the Femmes and the crowd, just how it was always meant to be.

They play soft, but we aren’t at a Metallica show – there’s no pyrotechnics that they need to be playing over. The crowd can hear The Femmes about as well as the Femmes can hear the crowd, which is a blessing and a curse of Massey Hall. Tonight’s crowd was loud and emphatic. The longest line for beer I’d ever seen at Massey Hall, stretching outside the bar, was a good indication of that.

The Femmes have a massive catalog, and they aren’t afraid to play their new material. The crowd basks in it, sits and bobs along to track after track. About half way through the show, Brian pulls out a copy of the new album that was released the day before, and holds it up in the air. “This next one happens to be the first song on this new album.” He breaks into Blister, and the entire crowd is on their feet – time to play the older stuff.

Brian’s gift of reading the audience didn’t go unnoticed. The crowd remained on their feet for the remaining half of the show with people rushing to the front of the stage to dance. Security has given up at this point – good luck controlling a pack of drunk baby boomers.

Like Brian told me earlier in his hotel room, he wasn’t dumping music on the audience – it was a conversation. There was push and pull. They wanted a xylophone solo during Gone Daddy Gone? They got one. They wanted a sax solo on a 12-foot tall bass sax? The Femmes delivered. You want a gong? You’re damn right John smashed the gong. The Femmes have already solidified themselves as a piece of rock & roll history, regardless of how turbulent their own history has been. They are at their best when they are imperfect, because that it is when music is the most honest and daring. 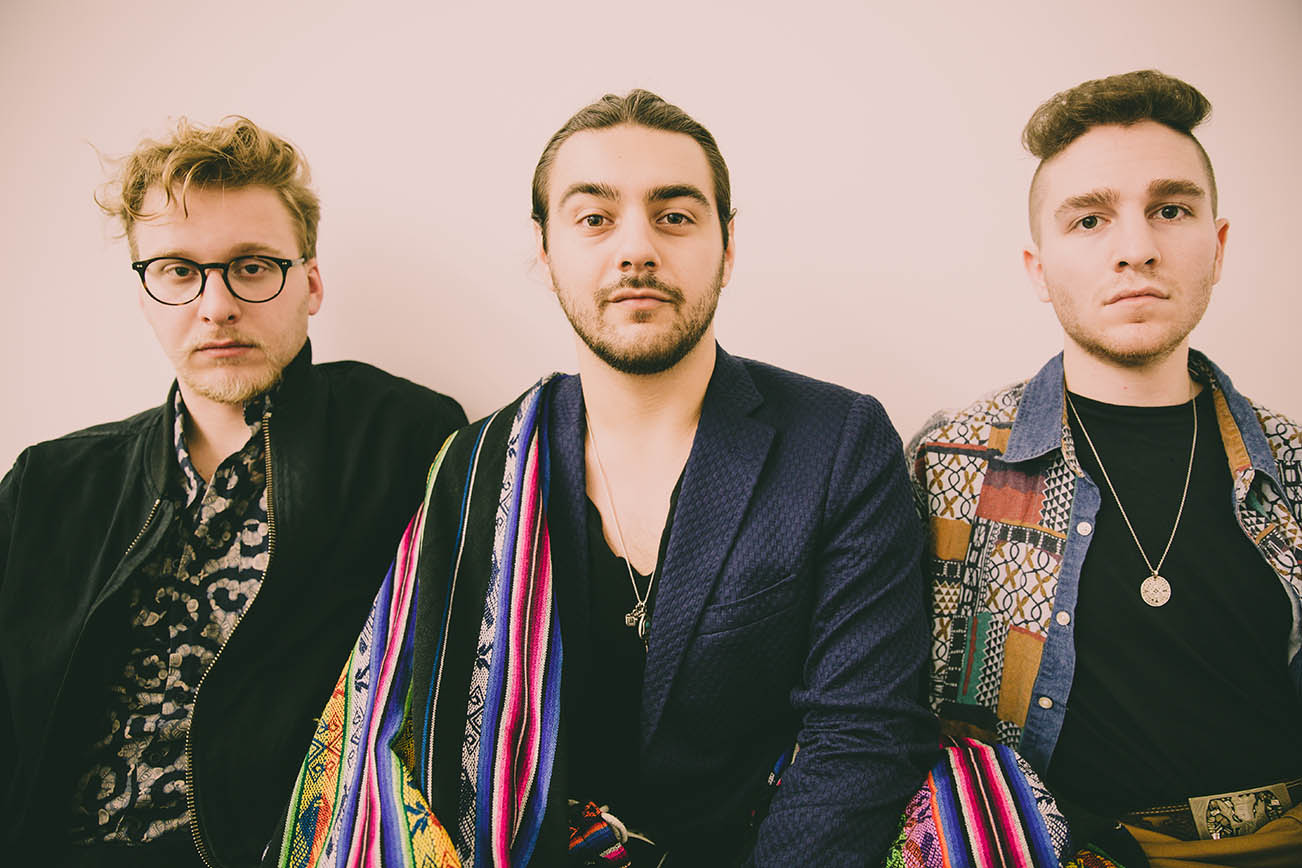 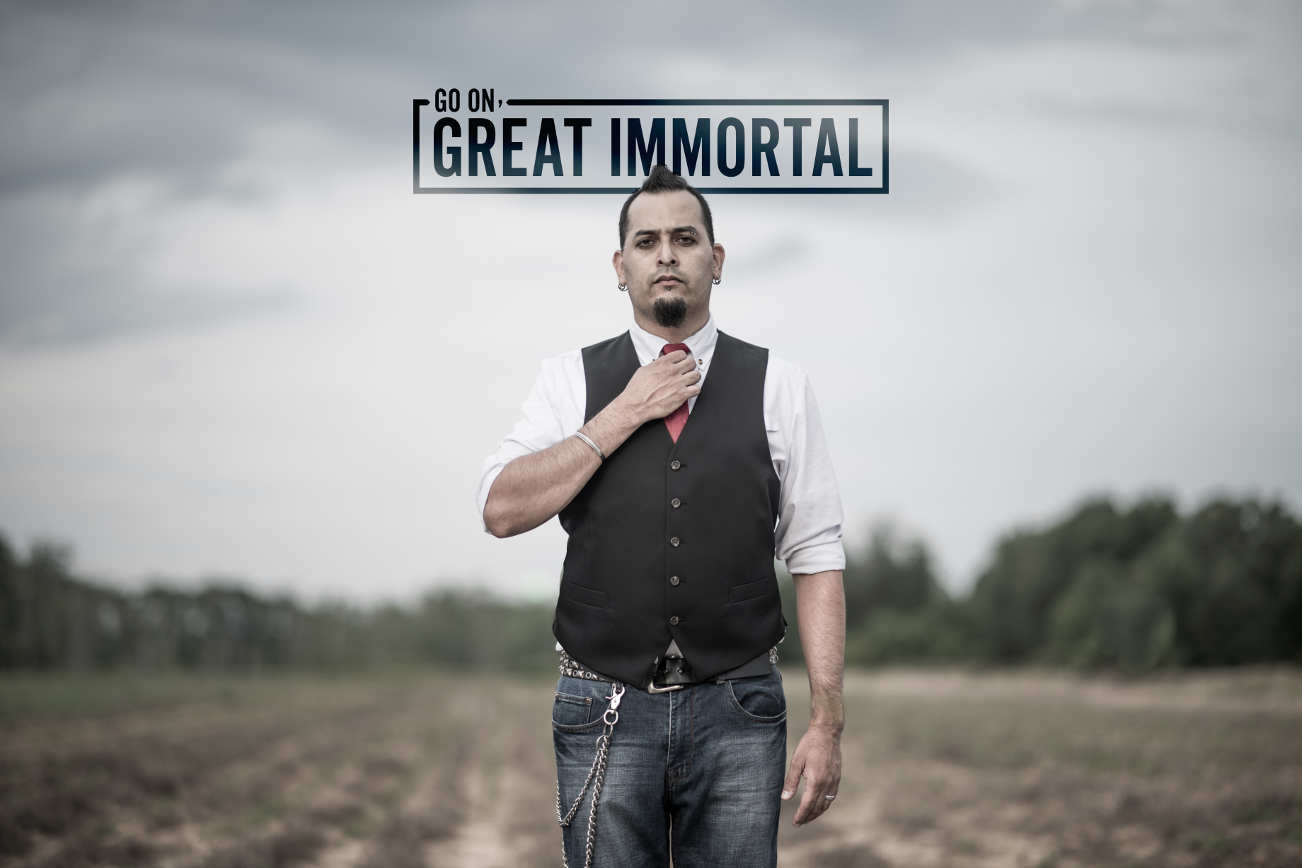