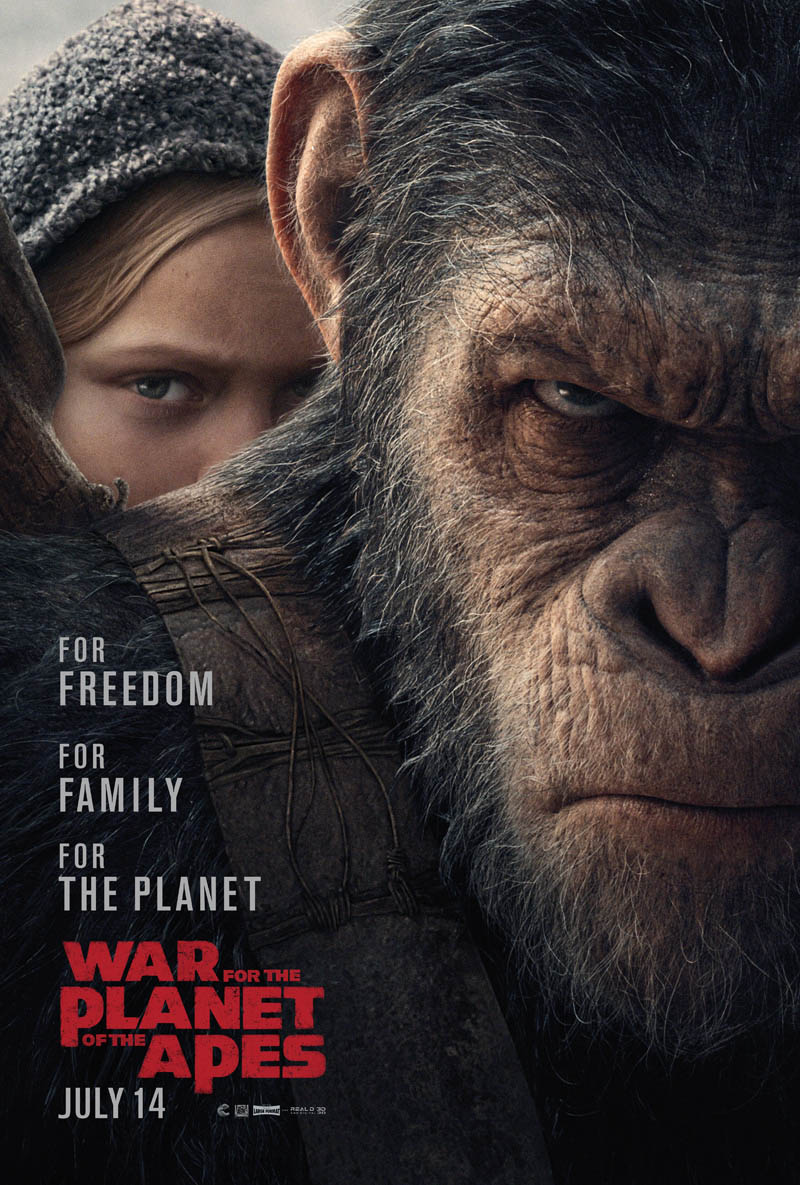 I absolutely adore movie trailers. They are frequently overlooked as an art form unto themselves, and while many consider the fifteen-minute run of trailers that precede a film to be an opportune time for snack purchasing or bathroom breaks, I find it to be an integral part of the overall experience. Typically, the batch of trailers played in front of a film are acutely in line with the feature itself: ads for superhero blockbusters play before Spider-Man, those for horror/thrillers before Stephen King adaptations. Ahead of my screening for War for the Planet of the Apes (War), however, were a curious collection of indie dramas and comic book films such as Detroit, The Shape of Water, and the upcoming Kingsman sequel. I initially thought these films were haphazardly selected, but after seeing War, it’s clear that the ninth instalment of the Planet of the Apes franchise is among the rare few pictures that can unite all manner of film fans. Recent chapters in the Apes series have repeatedly delivered far beyond their mediocre marketing campaigns, but War is a particularly pleasant surprise and cements the modern Apes trilogy among the best of all time.

War is directed by Matt Reeves and concludes the story of Caesar, the first hyper-intelligent primate, and leader of the apes, as he attempts to protect his people from humanity’s new regime and struggles to choose between being a ruler and a father. It’s a deeply personal and introspective story, especially for a blockbuster in which none of the primary characters speak fluent English. This storytelling hurdle forces the filmmakers to create a highly visual cinematic experience, and War is all the better for it. There is seldom a moment of exposition, and those with a keen eye and cursory knowledge of the franchise’s history will be able to piece together the specifics of the plot long before the film explains itself. Every frame of the movie tells a story unto itself, and is lush with the series’ characteristic uncanny and eerie beauty, potentially making this the most captivating achievement in visual effects to ever hit the silver screen.

There is a saying amongst film fans which states that watching a horror movie without sound can make the film tolerable for even the most cowardly of audiences. While War is more thrilling than horrifying, it seems as though director Matt Reeves is simply showing off when he occasionally rids the film of its score, creating enthralling moments of tension without the aid of a soundtrack. In fact, much of War acts as a showcase for how incessantly brilliant the cast and crew are, yet the movie never feels like a talent show intended to highlight those involved. Rather, it is the product of an auteur’s singular vision supported by an expansive team of masterful filmmakers: the script and visuals complement each other perfectly, the cinematography is jaw-dropping, and, when present, the score accompanies the story with grace and subtlety. While Woody Harrelson is powerful in the villain role, it’s Andy Serkis as Caesar who rightfully steals the show; this is an Academy Award-worthy performance and should cement Serkis as one of the great actors of our generation.

While scenes of major action spectacle aren’t plentiful, War is nevertheless exhilarating throughout. The popcorn flies fast as the film continuously subverts audiences’ expectations, introduces meaningful and shocking revelations, and builds characters that audiences genuinely care for. The battles are interwoven with emotion and the stakes are resultantly palpable, particularly in the finale, which proves that an explosive third act needn’t be empty of dramatic weight. While this is unmistakably a blockbuster, meaning and politics are seamlessly incorporated into the narrative in a way that isn’t distracting or invasive of audiences’ enjoyment.

War has shockingly little in the way of cons. Admittedly, it doesn’t revolution the franchise in the way that Dawn of the Planet of the Apes did back in 2014, but it progresses the narrative in a way that feels natural and satisfying. There is a comedic relief character who initially feels out of place, but viewers in my screening gradually grew fond of him as the film progressed. By the time the credits rolled, I found most of my concerns had been mitigated such that my biggest flaw with the film is the blatancy of the product placement early in the first act – a nitpick at best.

Final instalments in trilogies can often be lacklustre when compared to their predecessors. Hollywood has repeatedly proven this with films like The Godfather Part III, X-Men: The Last Stand, The Matrix Revolutions, and Spider-Man 3 marking some of the most disappointing attempts to conclude beloved franchises. Knowing this, my anticipation for War was intentionally reserved, but needlessly so, as War for the Planet of the Apes is the most riveting cinematic experience of the year, and damn near a masterpiece.