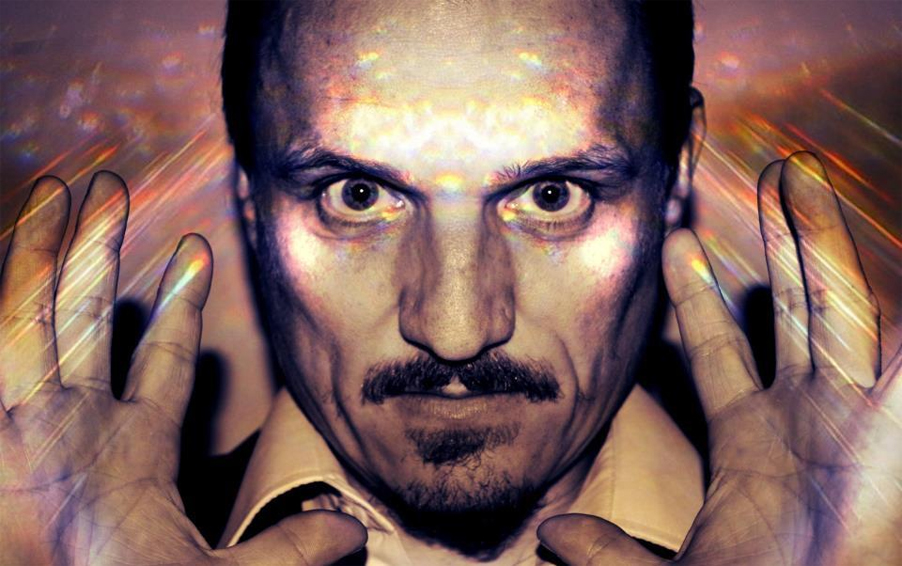 One of the UK extreme music scene’s most creative characters, the mind of Paul Catten has spawned a hugely diverse catalogue of projects. Following the release of the new album from his current band, Barrabus, we sat down with Paul and took a journey through his musical life story.

“Jeez, I’ve been involved with some bands over the years, and pretty much all extremely noisy in their delivery. Sharing the best, and worst, of times, it’s been a bumpy ride for sure. Read on…”

01. Medulla Nocte
Paul: This was the first outfit. People think we arrived out of nowhere in 1997 with All our Friends are Dead but we had been slogging for 4 years before that. Up and down the country playing to no one and trying to sell cassettes to the local tramp and his dog. We got lucky with a blagged London show and took it from there. Household Names Recs took us on and the AOFAD 7” came out, picking up Kerrang single of the week and a bunch of rave reviews followed. Live we were unstoppable, getting more and more intense over time. We then signed to Copro and recorded Dying from the Inside. I hate it, I hated it then and I hate it to this day. I blew my voice the first day and tight deadlines and budgets meant I was stuck with it. Shame, the songs are great but I fucking suck. I lost respect for the band from that day for not backing me up and an already fragile environment became 10X worse.

We did some more touring, got nominated for a Kerrang Award in 2000, had all our gear stolen, then split up over a blown fuse. We hated each other in those last days. We’d arrive at a venue in different cars, sit in different parts of the place, go onstage and fucking smash it then be friends for a short while. Wake up, repeat. No way to carry on. Shame, we got to a point we had always dreamed of and fucked it up whilst getting fucked over by everyone. We toured with bands we loved and met our idols, the best days, yet ruined by petty squabbles and jealousy. I often wonder how we would have sounded had we continued, I haven’t seen Neil for years, Jam is gone and Mark continues to be my partner in musical crime.

Check out the track “All Our Friends Are Dead”

02. Murder One
Paul: Jammer and Mark had been jamming Murder One just before Medulla Nocte‘s demise so it was natural for them to carry on. Jam had a dream of a supergroup type of thing with Morrow and I on vocals and some other guys from the scene. Both me and Morrow took some persuading but in the end, we turned up and it was cool. Nice and loose compared to Nocte and a friendlier atmosphere. Jam was still a pain haha but it worked well. Some rehearsals later we were ready and, even though he knew his limits healthwise, Morrow was in. We recorded the EP (still one of my fave recordings) and got our act together to hit the road. June 2002 we hit London for a day of press and a gig at The Garage. Morrow was in fine form all day, as we proclaimed ourselves as a remedy to all that was wrong with metal at that time. The best fun. Before the gig both of us sat in cafe and talked about the band’s future and how we were both so up for it. We played, it was cool and then we kicked back for the night. A long drive back to Nottingham to drop Morrow off and we gave each other a hug and he went in. I never saw him again. Tragic.

We should have canned it and we sat in Jam’s living room and discussed it. Then we had friends, Johnny’s friends and family asking us to carry on, the label wanted the EP out as a tribute so we kind of felt emotionally tied to doing it. We hit the road and to be fair it was fun, but we were drinking like fuck and at times it was ugly. Then we opened up the Main Stage at Download, and that was it. For guys like Jammer and I playing Donnington was the pinnacle. We hugged before we went onstage, played, and came off feeling great of course but like that there was nothing left to achieve. A piece of me died that day to be honest.

We rumbled on, with numerous line-up changes, bringing in John Loughlin as a second vocalist and went on to record the Some Things Are Better Left Unsaid album. We had great fun but no one seemed to give a fuck about us. Our last gig was on the Gwar tour, and as fun as the tour was, we knew the game was up. Mark and I were already working on other stuff, John was always going to be tied up with Speedhorn and the revolving door of guitarists became to much to deal with for Jam. We went out with a whimper compared to the grand entrance we had made a few years earlier.

Check out the track “Onscreen Rapist”

03. Co-Exist
Paul: I had a brief stint with Glaswegian lunatics Co-Exist around this time. I’d done some vocals on their demos and a short tour with them during the Medulla days and we had become good friends. You put your life on the line playing live with this band that’s for sure! So fast and intense, I loved it, Charlie knows exactly what he wants and that is usually grindcore at breakneck speed. I did the album with them but its a bit off vocally for me, I much prefer the demos, but the songs are outstanding. They never quite got the break they deserved to be fair, people don’t take a chance on Scottish bands in England really. Shame, they were way better than the majority of English bands around at that time. Good to see them back up and about. Fucking nutters.

Check out the track “We Are Damaged”

04. Barrabus Mk1
Paul: Lets wear suits and play spazzy rock music that no one understands was the theme of a conversation Mark and I had and we saw it through. I loved the Barrabus gigs we did, no pressures, no label hassles, no arguments in the band, just taking it as fun. We were already playing in the last days of Murder One and it was the breath of fresh air we needed. We called on some old friends to take us on tour (My Ruin and Sikth) and just went out and played. It was the first time I brought some electronics to the table and it made for a great live set up, and became the debut of the Theremin which was to become my instrument of choice. These Barrabus years were some of the best times in my musical life, I absolutely love the tours we did. I think Dan got a bit fed up with the travelling and so rehearsals petered out, leaving Mark and I to start working on something else even more ridiculous. I was a bit gutted when we stopped working, and had no idea what would happen a few years later.

Check out the track “In League With Vader (demo)”

05. Lazarus Blackstar
Paul: Some guys I didn’t know were looking for a vocalist and a mutual friend suggested me. We got in touch and they sent me 4 tracks of the slowest stuff I had ever heard, yet alone sang over. The challenge was too great so I sat and wrote some words, went to Bradford and that was the beginning of the Revelations album. Blackstar live was the heaviest thing I have ever felt. Playing a gig with these guys was like having my internal organs shifted around for 30 minutes. Insane heaviness, and I fucking loved it. The guys gave me a free rein with the lyrics and that was the last time for many years I worried about writing serious lyrics. The only downside was Bradford is 4 hours drive away and became tough after a while.

The second album is a doom masterpiece in my opinion, and those songs live….heavenly. I remember we smashed the Damnation Festival in 2007, in my top 3 gigs of all time. I have to say that Lee Baines is probably the best doom riffmonger in this country, if not Europe at least, by a mile, he oozes heaviness with his songwriting. I’d work with him again any day. People struggled to get the vocal style for a while when we came out, and I took some flak from the doom elites but in the end they gave me a little bit of leeway…

Talking about these albums give me goosebumps as vocally they were the most testing and emotionally draining I had ever done, but songs like the 3 Revelations songs, “Restraining Order” etc. are classics to me. Sad end to my time in the band really, my life fell apart behind the scenes and I hit rock bottom. The last thing I needed was to be commuting to Yorkshire regularly and I was being difficult to work with (in all the bands I was in at the time). Good old depression. Sometimes I still regret that, but Mikhell is fucking solid as a vocalist so I’m still a fan of them regardless.

Check out the track “Revelation 1 Day of Reckoning”