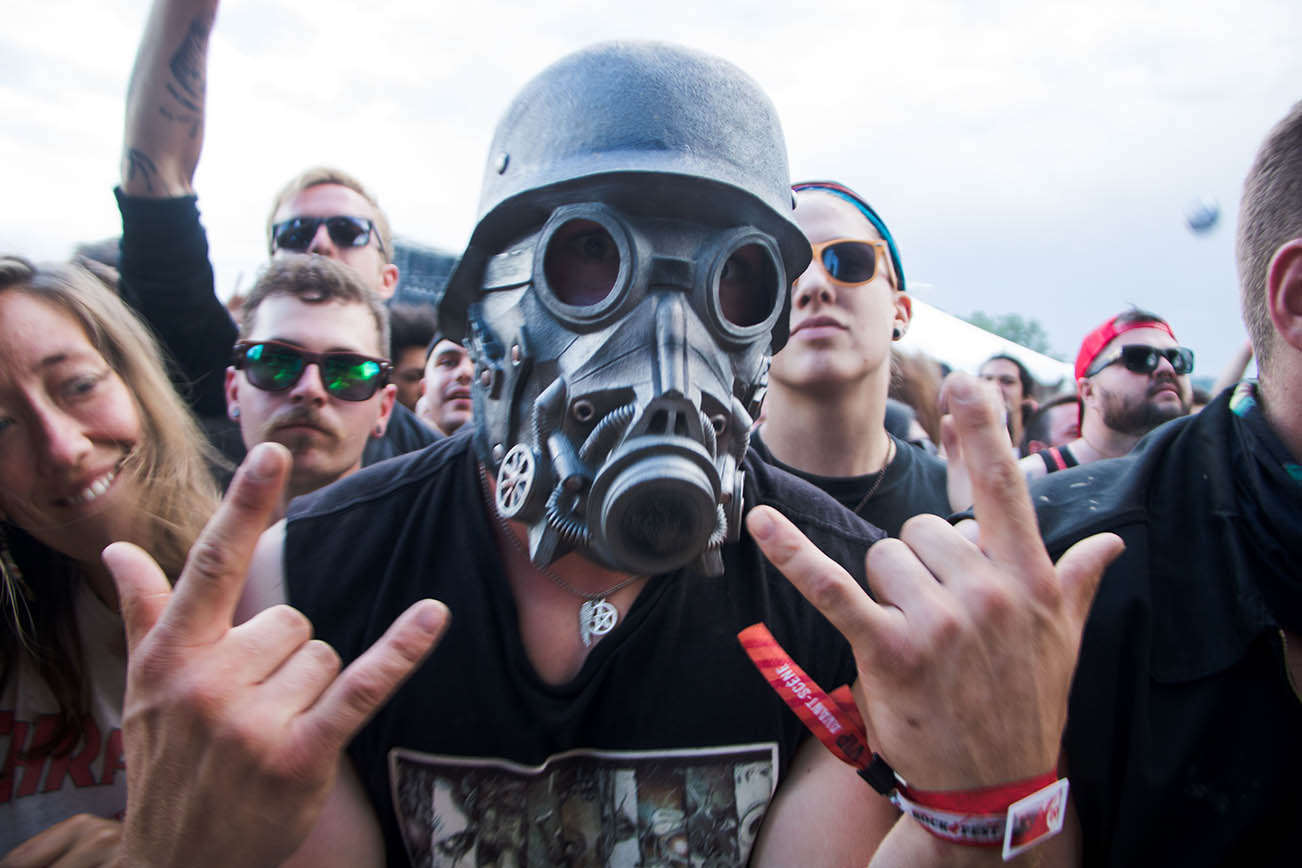 The sun was shining and the hangovers were aplenty but that wasn’t about to slow down the town of Montebello. On Day 2 we made it back to the festival in time to see the Jesse Hughes fronted Eagles of Death Metal. Never getting a chance to see this band it was one of the more highly anticipated acts we wanted to see this weekend. Jesse Hughes graced the staged clothed in white wearing an impressive EODM cape. Almost immediately, Jesse spotted an inflatable Smurf doll in the crowd, much to his delight, and acquired it for himself, placing it on stage next to an ORANGE amp.

This man radiated pure sunshine and greeted the crowd with the cadence of a preacher, no surprise really since he is an ordained minister with the Universal Life Church! EODM would start their set playing “I Only Want You” and “Miss Alissa” from their album Peace Love Death Metal, and eventually masterfully playing a cover of “Bowies Moonage Daydream”. (Not the only bad-ass cover we heard that day.) When Jesse was done singing along with the crowd of Rockfest, he then brought out life time friend and lead of Queens of the Stone Age, John Homme to rip up the drum set for their track “Speaking in Tongues”. This made me all the more excited for QOTSA later in the night. I had so much fun photographing Eagles of Death Metal I can’t wait to see them again.

With the sun still beating down, not long after the Eagles set had finished, we headed over to the Tony Sly 1 Stage to catch psychobilly kings Reverend Horton Heat and boy did they bring the heat. I haven’t seen a three-piece rock a live crowd like this since Dying Fetus at Heavy Montreal. They started their set with “Big Sky” leading into “Psychobilly Freakout”, and breaking out a tune we hadn’t heard before called “Let Me To Teach You How To Eat”. This track has quickly became a new favourite. Just when you think they couldn’t pack more awesome into a 30 minute set, they played the second cover of the day and by far the best; Motorheads’ “Ace of Spades.” Good golly miss molly did that pit open up, it was like they tapped into the soul of the Doomrider himself. Lemmy would have been proud of that performance I do believe.

Feeling a bit wiped out and rather hungry, we made a pit stop once again to Gusta Vegan for some delightful vegan sausages. Can’t say enough about this vendor we’ll be looking forward to their visit at the Toronto Veg Food & Drink Fest.

Grabbing a couple of beers from one of the hard working mobile beer servers, I noticed the massive amount of accumulating plastic cups on the ground, making it an admittedly repulsive mess, although festival staff did their best to clean up as the festival carried on, it was just a near impossible task to stay on top of. Then I thought why don’t they sell re-usable cups. Heavy Montreal had these cups, you could buy them with a pint for an extra $2, they were labelled so you could keep them as a souvenir (I still have mine) or return them for a refund. This solution helped massively with grounds upkeep at Heavy Montreal and I believe this would help massively with the plastic cup situation at Rockfest.

With freshly stuffed faces we headed back to the Jagermeister stage to embrace Meshuggah; this will have been the fifth time seeing this act and I gotta say they don’t evolve much. I mean if it ain’t broke don’t fix it, I guess. During their set it started to rain rather heavily and even Jens Kidman jokingly took credit for bringing the rain after their performance of “Born in Dissonance”. They would eventually close out their set with fan favourites “Bleed” and “Demiurge”.

At this point the rain was super heavy and we abandoned our umbrella earlier in the day assuming it would be sunny all day. What fools we were, so we found immediate shelter under fabric hanging off of one of the security fences. During this moment I thought of Chicago Open Airs’ giant beer tent (the Headbangers Beer Hall, it was epic) and their massive shell-like art installations with picnic tables sitting under them. A few of those would go along way at a festival like Rockfest. Thinking about it now I noticed a severe lack of VIP tenting areas like those mentioned in the Oasis package. The rain didn’t last long but we missed Megadeth due to it.

We decided to take a stroll through the town of Montebello as we waited for Alexisonfire to hit the Budweiser stage. No matter where you walked the party was always there to greet you. Everyone who owned a motorcycle was driving through Rue Notre Dame showing of their impressive wheels. The final hours of Rockfest were winding down and we found our self at the Budweiser stage waiting for Ontario’s own Alexisonfire. This band knows how to put on a show, every time I see them I gain an even greater appreciation for them. They started their set with the powerful “Drunks, Lovers, Sinners and Saints” by the time they started playing “Old Crows”, George Pettit screamed the shirt off of his back, literally. I managed to get a shot of George looking like a superhero who’s cape caught the wind. Before long they would leave the crowd exhausted and wanting more as they closed out their set with favourites “Accidents” and “Young Cardinals”.

Feeling the intensity of the weekend we hung in for our final act of the night, Queens of the Stone Age. While waiting for the band we were entertained by a large fellow sporting a Jagermeister foam hand running around introducing himself by playfully poking his foam finger at unsuspecting concert goers, sometimes in the face! Watching people individually getting caught by surprise and laughing it off the moment they clued into what was happening. It truly put smiles on many faces. The lights dimmed and all were cued to the impending performance of Queens of the Stone Age. They started with some traditional native american tribal spirit music before being hammered with “Feel Good Hit of The Summer” and just when the crowd managed to catch their breath they hit us with “No One Knows”, one of my personal favourites. They would continue this massive set with incredible tracks like, “Sick, Sick, Sick,” “3’s&7’s”, “Little Sister” and closed with “A Song For The Dead”. QOTSA proved their rock god status at Rockfest and seeing them again is certainly a must.

Exhausted and tired from two days of an incredible festival lineup, we left dreaming of what they could possibly do to top themselves next year. They may wish to incorporate some shelter installations to help people catch a break from the beating sun or heavy rains, a large beer tent with craft beers and a more efficient VIP lanes for entry and exits, to make the festival even better! Reusable beer cups and water refill stations are imperative to any summer festival!

All in all, we here at PureGrainAudio will be counting the days until the next Montebello Amnesia Rockfest. Canada’s largest rock festival.