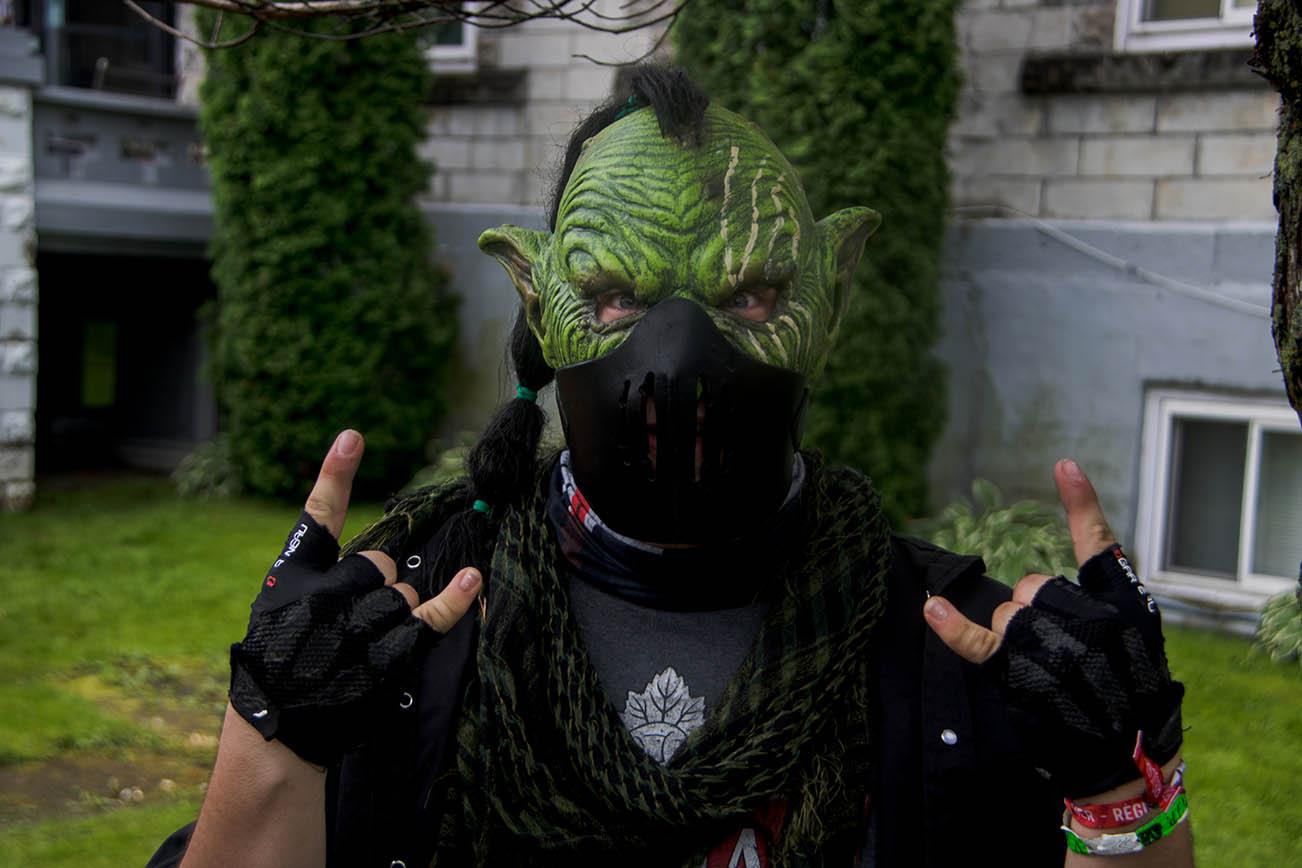 For over 10 years the small town of Montebello, Quebec has been home to Alex Martels’ Amnesia Rockfest and on June 22, 2017, PureGrainAudio got the opportunity to attend this one-of-a-kind event.

The magnitude of this festival was felt the moment we exited the highway into Montebello. We came from Toronto and accidentally detoured through the main street, Rue Notre Dame and entered what can only be described as a Heavy Metal Woodstock.

I’ve been to five festivals prior to Rockfest; Evolve Music Festival, Heavy Montreal, Riotfest, Bestival and last year the inaugural Chicago Open Air. These festivals had a tendency to feel like separate entities inside of their respective locations, this is the first time I’ve been to a festival where the entire town not only emphatically supported a festival but actively took part. Every corner of the town had street vendors, tents or parked cars on lawns.

At first glance the human traffic seemed overwhelming but soon we found there were methods to the madness. Getting into the actual festival site was relatively quick and painless as they have an automated check in system involving a phone app and wristbands. However this method works best on initial entry to the festival, but ended up being a huge hassle when it came to certain VIP sections inside the festival itself. More on that in a bit.

With 5 stages and an massive lineup of incredible acts planning out the day would mean missing a few shows. First up was Soulfly, Brazil’s most popular metal act and one I’ve been following since my teenage years. Finally getting to see this band was a bucket list event for myself and they did not disappoint. It was hot in the midday sun the crowd was on fire for Soulfly, playing classics from Prophecy and Dark Ages, I believe I even heard “Ishtar Rising” from Archangel. This band brought the heavy and I would happily see them again.

Since we made a b-line for Soulfly we decided to checkout the Festival a bit more and visit the other stages. On our way to All That Remains on the Jagermeister stage, we trudged through some muddy paths that reminded me of Riotfest Toronto in 2015. This wasn’t my first rodeo though I came prepared with my shit kickers and worked them good and plenty. But imagine our surprise when we witnessed people boldly walking with white sneakers. Only to be later seen drunkenly trying to clean the mud from them with a bit of brown paper towel sitting on a piece of cardboard in said mud. I couldn’t help but think of Heavy Montreal‘s sections of artificial turf and how something like those would come in handy in such circumstances. They dry quickly and are easy to clean; put them on some knee high raised boxed platforms and set a few around make them fairly wide. it would give a dry spot for people to chill and help save the grounds underneath from potential wear and tear.

After viewing several of the food vendors we were pleasantly surprised to find a plant-based shop serving sausages and kabob. So much love to Gusta Vegan for their delightful goods all weekend long. Beer aplenty everywhere as well.

All That Remains had a good set and shortly into the set we decided to check out the view from the Budweiser beer bus. That was the theme of this festival if you wanted beer there was Budweiser if you wanted something harder it would be in various forms of Jagermeister from shots to iced tea mixers, and all the energy drink you could ever want. Next on the jagermeister stage with a luau style stage set was thrash masters Killswitch Engage. This band never disappoints with their fun time antics and all around killer technique it didn’t take long for circle pits to form with tracks like “This Absolution”, “My Curse” and “In Due Time”.

After grabbing some beers from the Budweiser bus we decided to check out the Oasis VIP. For an extra fee it was billed as a cool lounge style getaway from the hectic heat of the festival. When we purchased tickets for the Oasis I had envisioned a pool lounge type of area with a private tent to escape the sun and maybe find some beer service. There were also supposed to be private washrooms in this area there were none to be found. What we actually got was nothing more than a fenced off pool that was apart of a local hotel accompanied by a single table and two deck chairs. This was probably the most disappointing aspect of the entire festival. To make things worse there was a set of bleachers blocking the view from the area and the Oasis VIP pass didn’t even let us have access too said bleachers! Overall, the Oasis was more of a mirage.

After feeling let down from the Oasis experience we decided to head back to the front section of the main stage that was a VIP zone. The entrance to this area quickly became a hassle with the growing number of festival goers. The entry was a small tent with typically only one man scanning everyone’s wristbands for entry and exit! Having to stop each individual and electronically scan each bracelet to verify VIP access was a slow process. When you multiply this process by thousands of people it takes a ridiculous amount of time to get through a simple gate. This process could have been simplified and made more streamlined if the entry tent was made wider and they had more security checking multiple lanes of passes for entry only. Scanning VIP Bracelets on the way out in some form of checkout system didn’t really make much sense.

Next up on the Budweiser stage was every teenage punk princesses’ highschool crush, AFI. They wooed the crowd with their classic hits before knocking out a couple of more recent hits, from “This Celluloid Dream” to “Snow Cats” before ending their set with “Miss Murder”. They put on a genuinely entertaining set and made for some incredible photos.

Soon after veterans Bad Religion took to the stage and and couldn’t have possibly looked more “Dad at a Sunday picnic” then they did. There is something special about a man that looks like he’s about to teach a science lecture saying “Fuck the System!” It was awesome seeing this band rock a massive crowd but I couldn’t help but wonder what their shows were like 20 years ago. Bad Religion was an excellent treat to witness and photograph as they performed “I Want To Conquer The World”, “Against The Grain”, “American Jesus” and “Fuck Armageddon…This Is Hell”. One thing that stood out to me was that their bass was so loud. My eyeballs were literally vibrating in their skull. I was at least 6 feet away from the speakers. I’m not sure if this happened with any other person but it was pretty wild. I’ve never experienced that before in my twelve years of attending live events.

Bad Religion was the perfect setup for one of my most anticipated bands of the night; The Offspring, the very first band I ever listened to at the age of 16. Fifteen years later I’m getting the opportunity to photograph them. Even better was the fact that they opened their set playing “Ixnay on the Hombre” with excellent precision. These gentlemen have been around the sun a few times but they haven’t lost a step and never stopped until they closed their set with my favourite “Self Esteem”.

Since we had a great spot near the front for Rammstein it was near impossible to make it over to the Deadly Apples set happening over at the Headrush stage. We really wanted to check out Deadly Apples as they are the band of Montebello’s own Alex Martel, however not being able to move for fear of losing our spot we enjoyed their set from afar. I particularly enjoyed their track “Further” from their new EP.

For us, the main visual buffet that brought so many people to these muddy fields was about to begin. This would be our second time seeing Rammstein live in just shy of a year. (three if you count the Rammstein: Paris film theatre debut). Rammstein is a band like no other, there are legitimately no words to accurately encapsulate the raw unaltered energy of a Rammstein show. Any chance these demi-gods grace North America I intend to see them every time. Getting access to a Rammstein pit is a holy grail for live event photographers one day we’ll get that opportunity, this time around was not that day.

However we did get to enjoy the spectacle not behind the lens of our cameras or smart phones but with our very eyes and senses! Enjoying the heat of their flames, excellent timing and stage presence and little details like their kick over mic stands, Which at one point Till had head butted Paul’s mic and opened a small cut on his forehead that bled for about three songs, then stopped. Then later would be reopened on a second microphone head butt. Of course let’s not forget the giant flame throwing everythings! This band can not be praised enough. After the whirlwind spectacle that went by all too quickly we left night one of Amnesia Rockfest exhausted and wanting more.