Israeli visionary, Eliran Kantor, has built a distinguished career within the Metal scene thanks to his colossal album covers for bands like Testament, Sigh, Atheist, Soulfly, and Sodom, among many others. Between August 10-13th, he will be exhibiting some of his works at the Rock And Metal Museum, which will take place on the grounds of UK’s famed Bloodstock Festival. This year, the museum also includes artists like Christian Sloan Hall, Paul Harries and Daniel P Carter, founder Paul Raymond Gregory and Cynosure Guitars, and many more!

Regarding this year’s participation, Berlin-based Kantor commented: “I’m very excited about being invited to attend the RAM at Bloodstock this year by Paul Raymond Gregory, the head of the museum and the creator behind some iconic album covers for Saxon, Blind Guardian, Dio and Uriah Heep among many others. There will be 5 of my pieces added to the permanent collection and on display this year. Not sure I can say which one – come and see for yourself!”

While we wait for Bloodstock/RAM to arrive, let’s check some of the album cover artwork Kantor recently created and what he has to say about each one. Prepare to be visually stunned…

01. Archspire – Relentless Mutation
– “This is one of the very few records you can place a sticker on that reads: For Fans Of Origin And Busta Rhymes. Artwork-wise also quite against the grain compared …to their peers, all credit there goes to the band for that direction. They pretty much had the entire idea all figured out in advance. It’s a human with shattered, reflective glass skin, laying in a bed of water, prying his pupil wide open oozing out relentless mutation of distorted faces.” 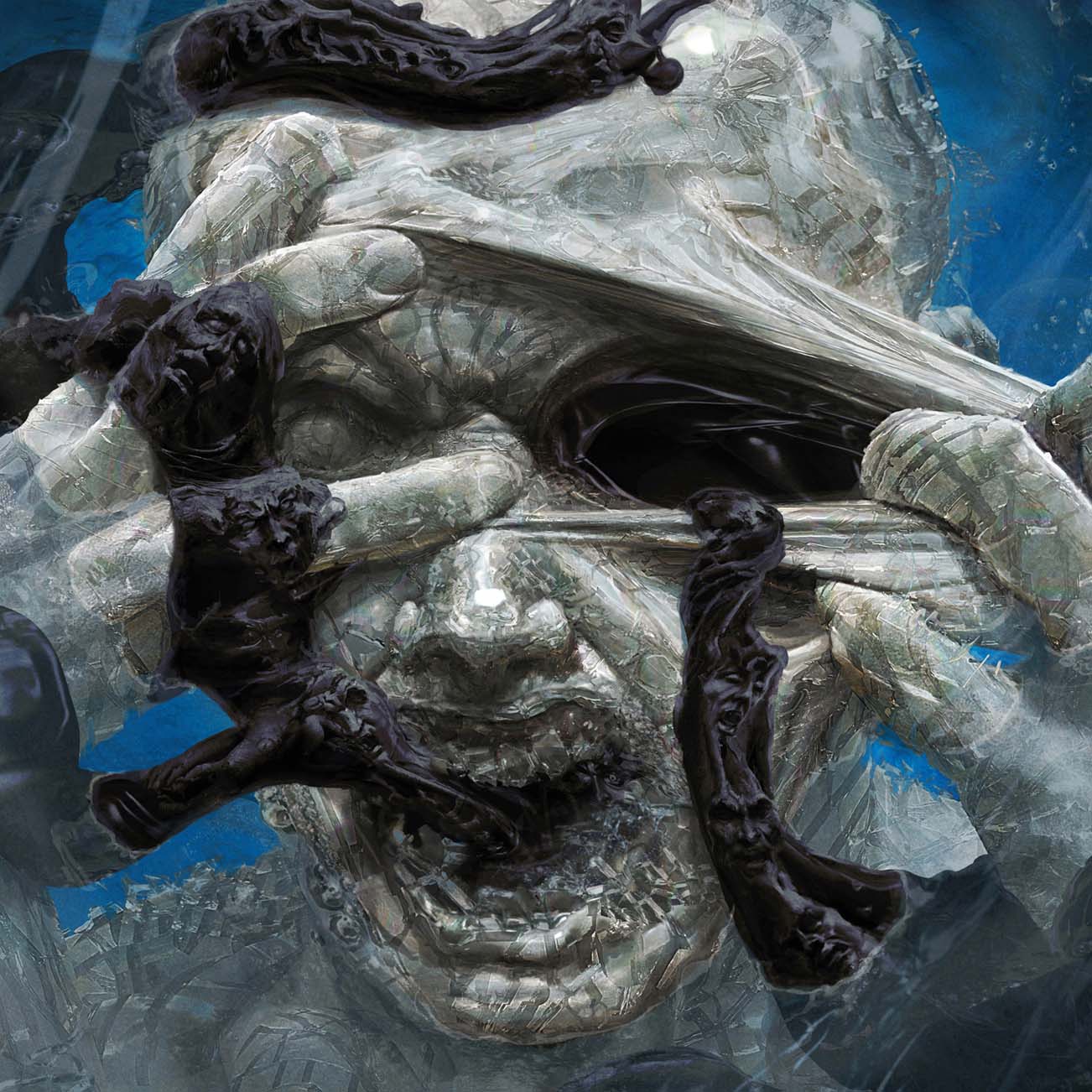 02. Crowbar – The Serpent Only Lies
– “The initial direction I got from them was to think along the lines of a fleur de lis with perhaps a snake wrapped around it, or maybe have a character in there as well. With [bassist] Todd Strange back in the band, I suggested bringing back the guy from the first three covers as well. He always seem to get into trouble so let’s have a snake coiled around him but the snake’s body will take the shape of the fleur de lis—in order to make it interesting.” 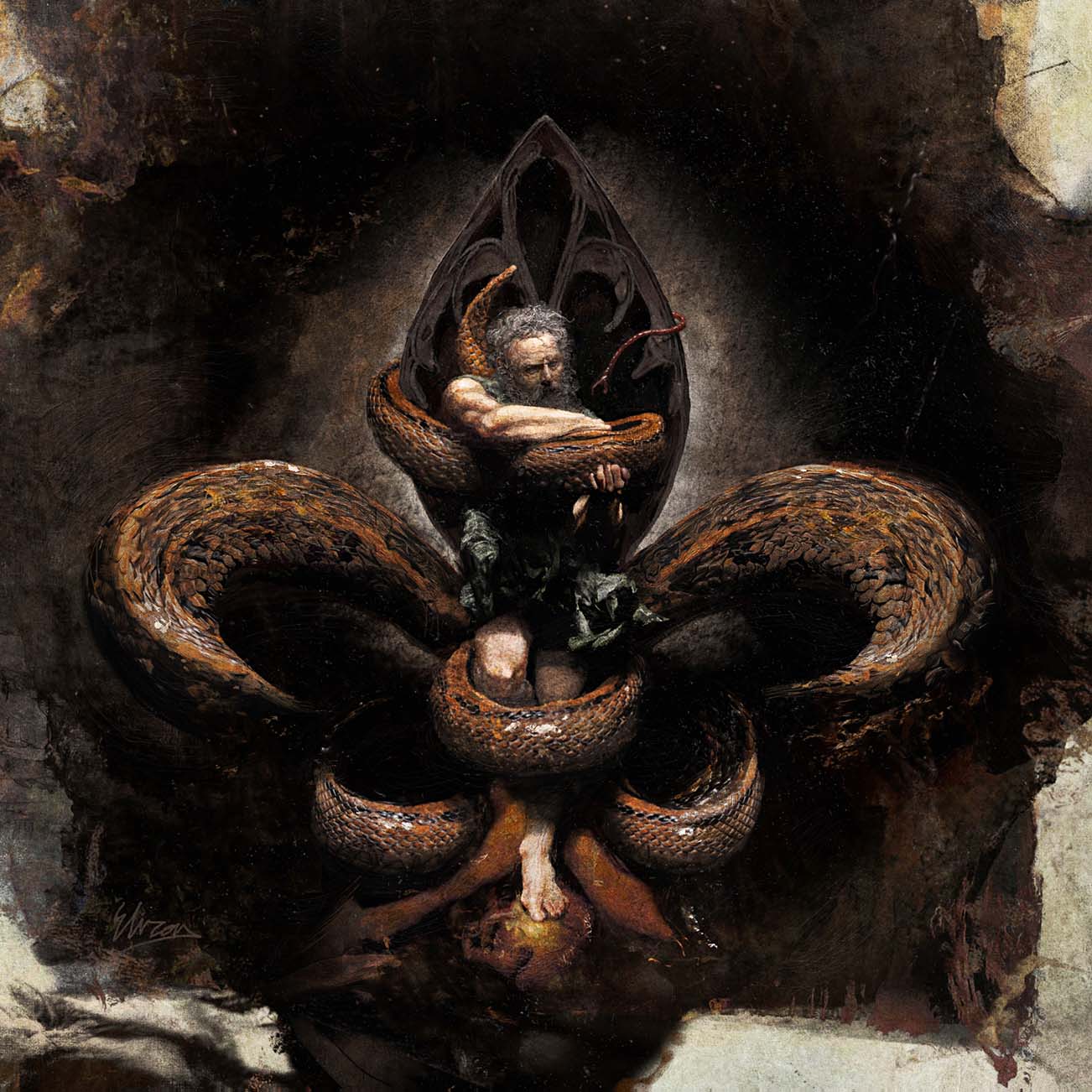 03. Disbelief – The Symbol Of Death
– “The concept came to me after reading the lyrics to the song ‘Full of Terrors’, which has a chorus that goes: ‘I’m Blessing You / You’re Blessing Me / It is Hypocrisy’.” 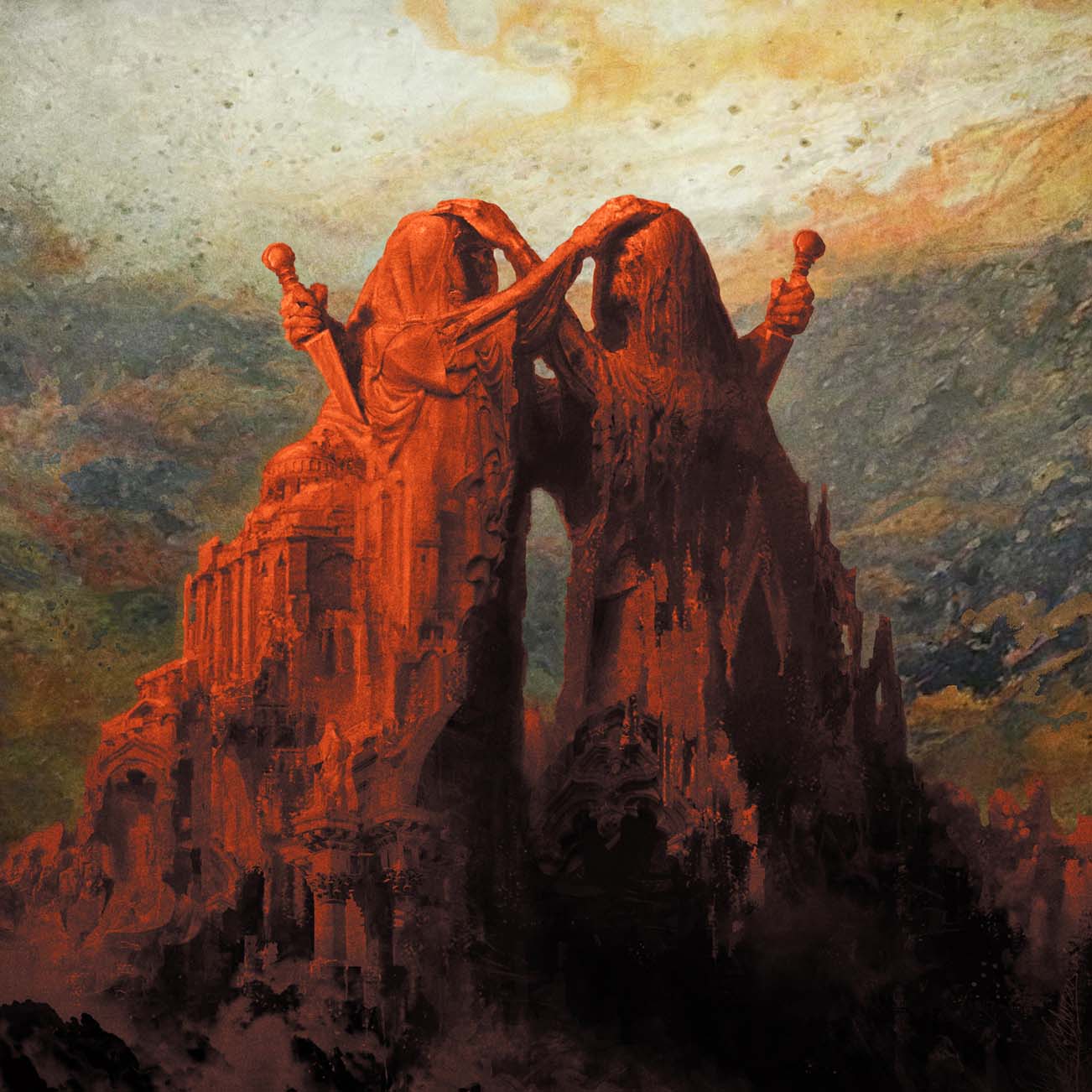 04. Ex Deo – The Immortal Wars
– “Ex Deo’s mainman, Maurizio Iacono (also of Kataklysm) wrote this epic record about the Punic Wars, a series of three wars fought between Rome and Carthage led by Hannibal and Scipio Africanus. I didn’t want an action scene since those are quite common, and instead opted to show the aftermath, once the adrenaline has run out.” 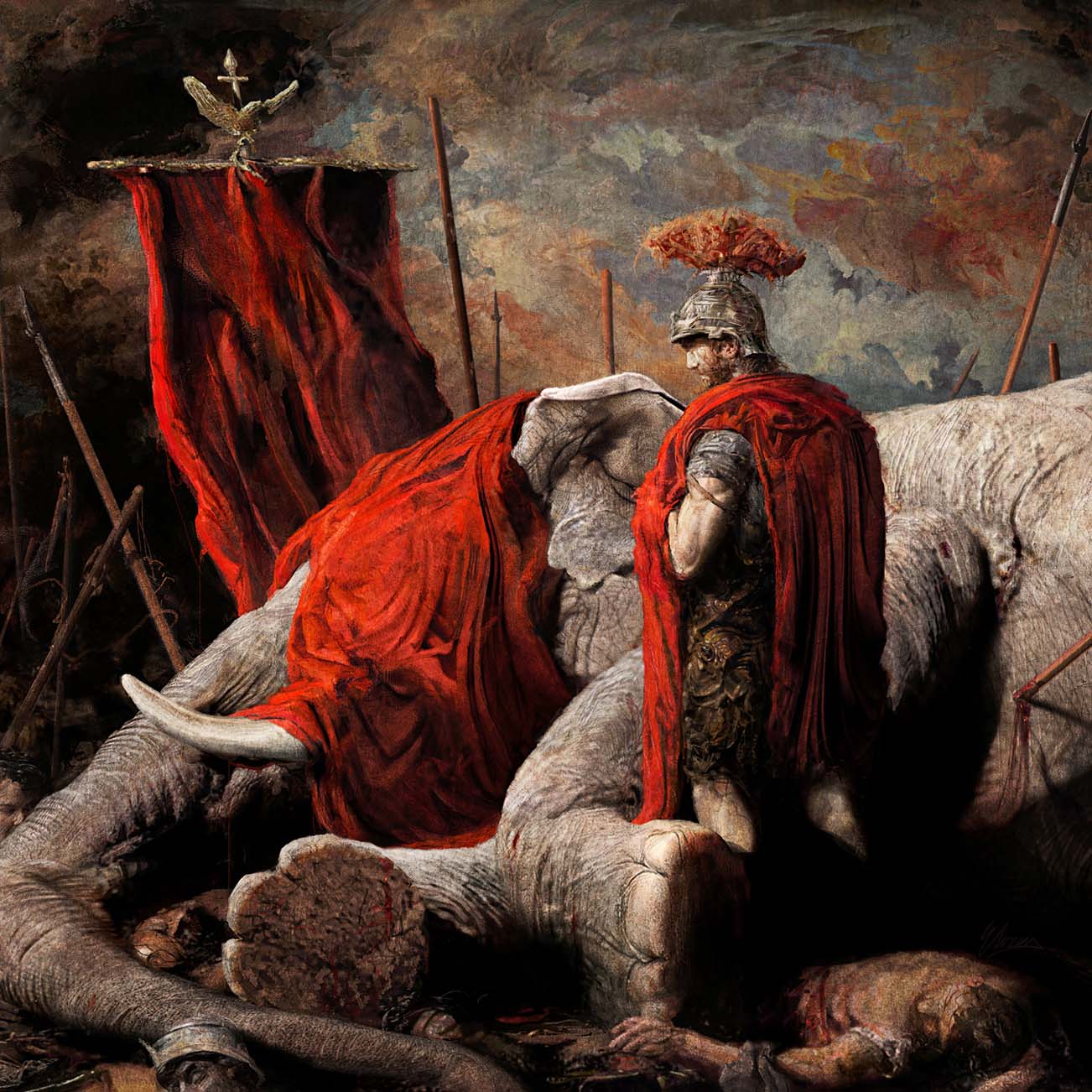 05. Green Death – Pure Torture
– “Newly signed to Megadeth’s David Ellefson’s new label EMP, this one was about the ‘Wrenching’ torture technique dating back to the witch trials.” 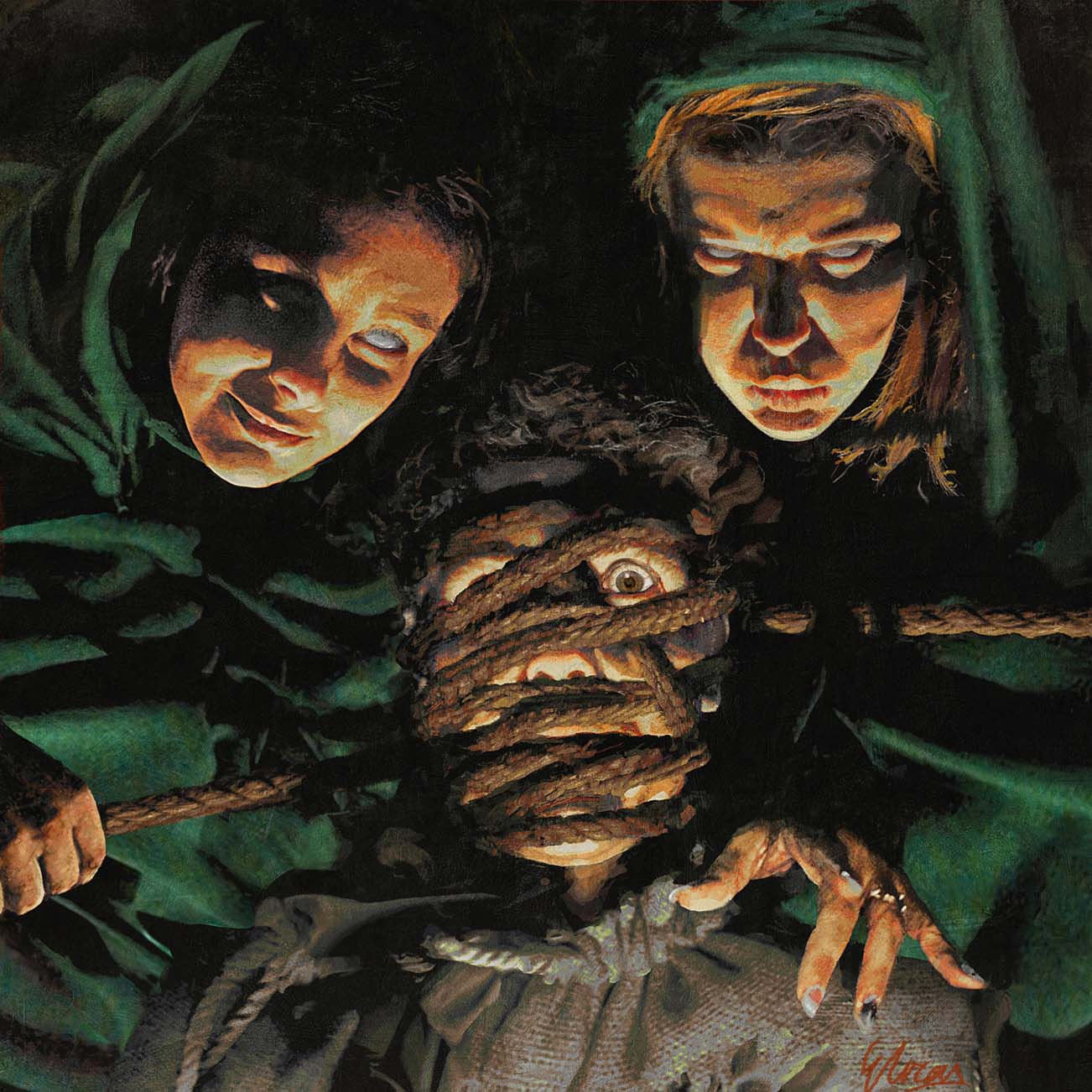 06. Incantation – Profane Nexus
– “Chuck Sherwood (bassist) showed me the lyrics he wrote and went into details about the themes behind each song. There was one song dealing with the natural habits of …locusts and one about a deity who’s wearing flayed human skin. I imagined it having a monster-like body made of tar, with the locusts draping it with skin parts they pick from a pit full of human sacrifice. The band constantly pushed this piece to be more twisted, obscure and not so easy on the eyes. You can take that as a testament to Incantation’s dedication of creating uncompromising Death Metal art.” 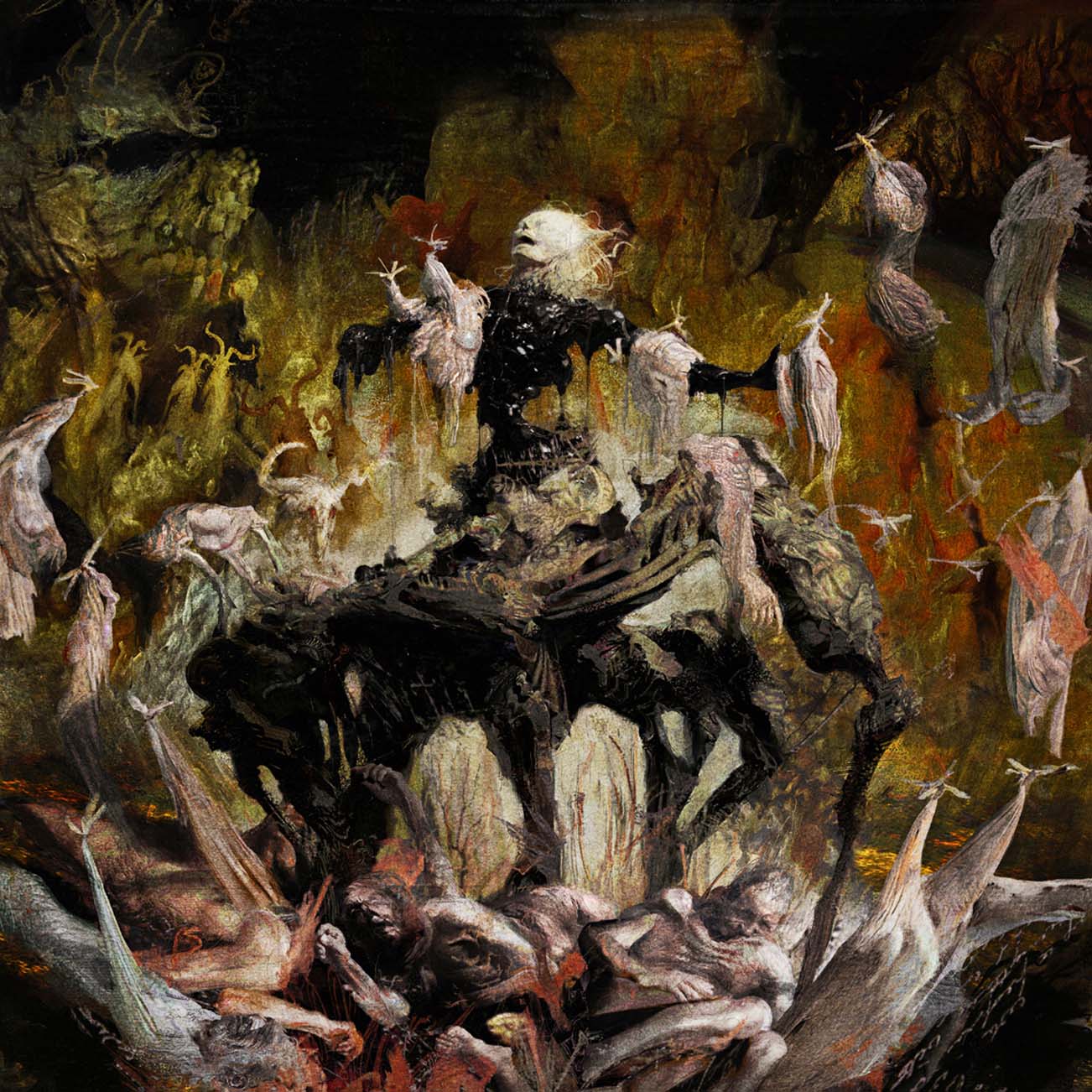 07. Izegrim – The Ferryman’s End
– “On this scene the Ferryman is killed, leaving the souls of the others killed by the hand of the same killer to dwell forever.” 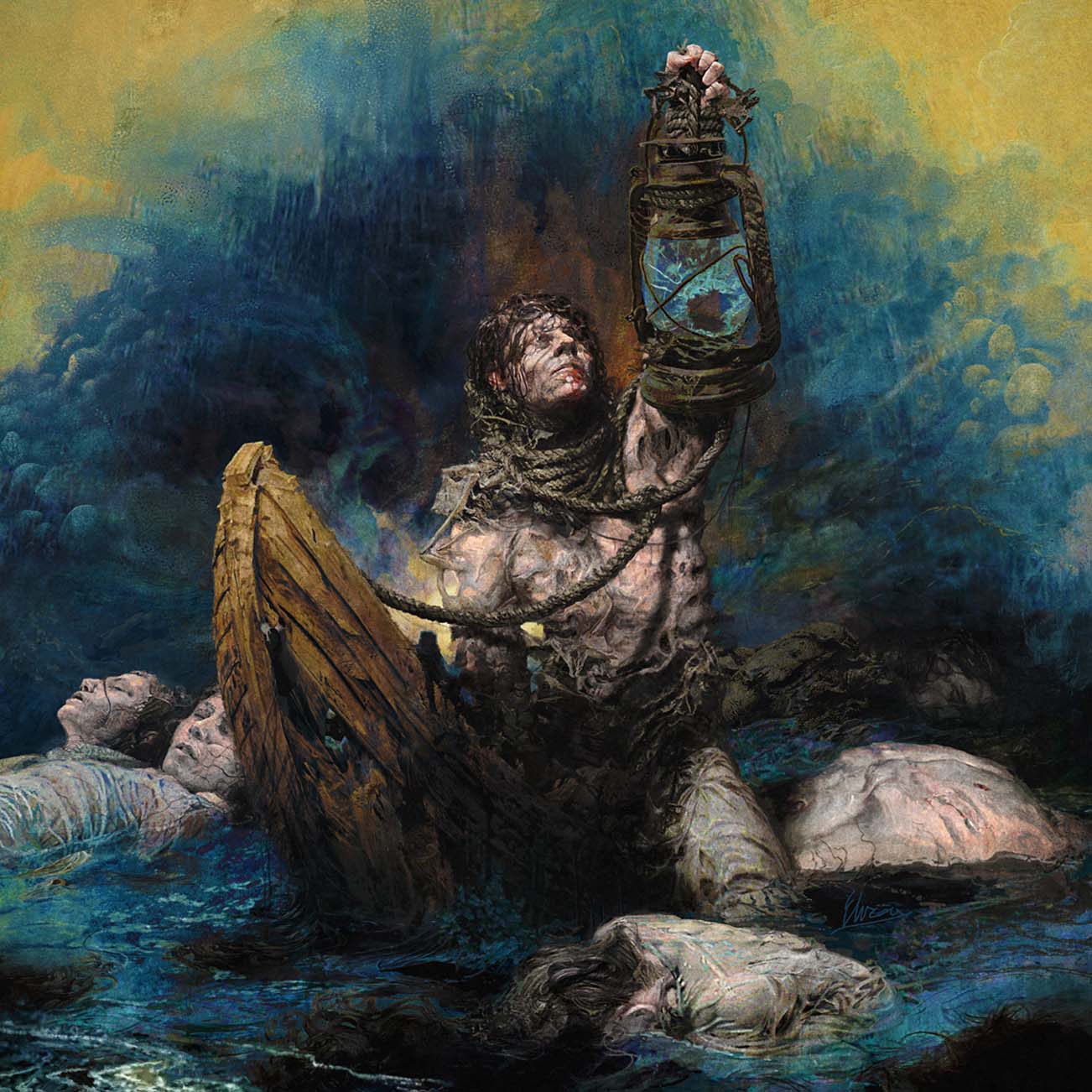 10. Loyal Until Death – Remain Defiant
– “Along with trying to illustrate the album title, recurring themes in the lyrics seemed to be freedom of speech and standing for ones believes in face of attempts to keep one silenced. The cover concept was based on that notion.” 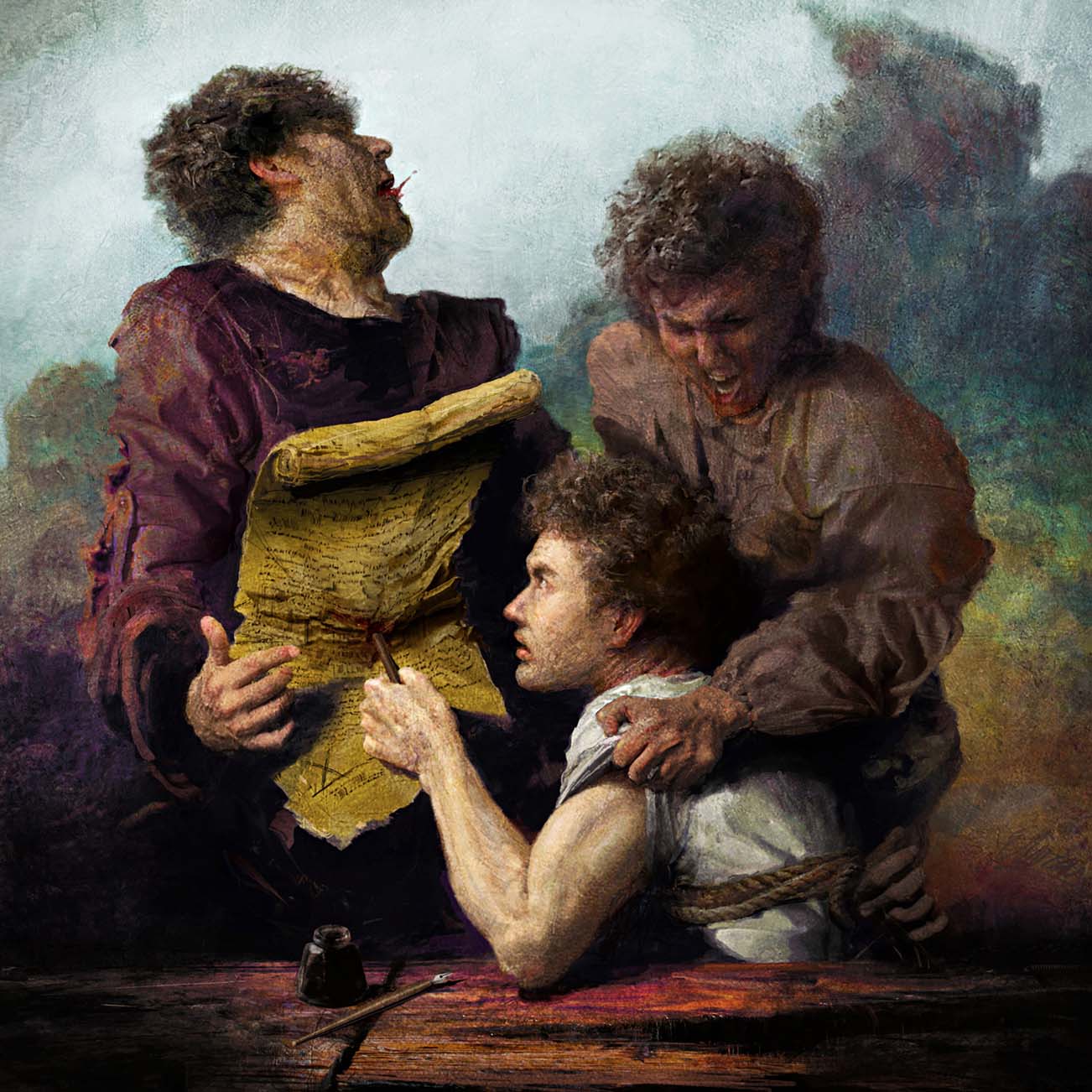 09. Mason – Impervious
– “With the album’s title track dealing with the unspeakable horrors of war, I was reminded of an idea I got from reading a post-war story about how far away from the fallout zone people went in order to get fresh water. So I imagined a surreal wartime scenario where a kid uses the hollowed-out heads of his dead parents effectively as buckets to carry water.” 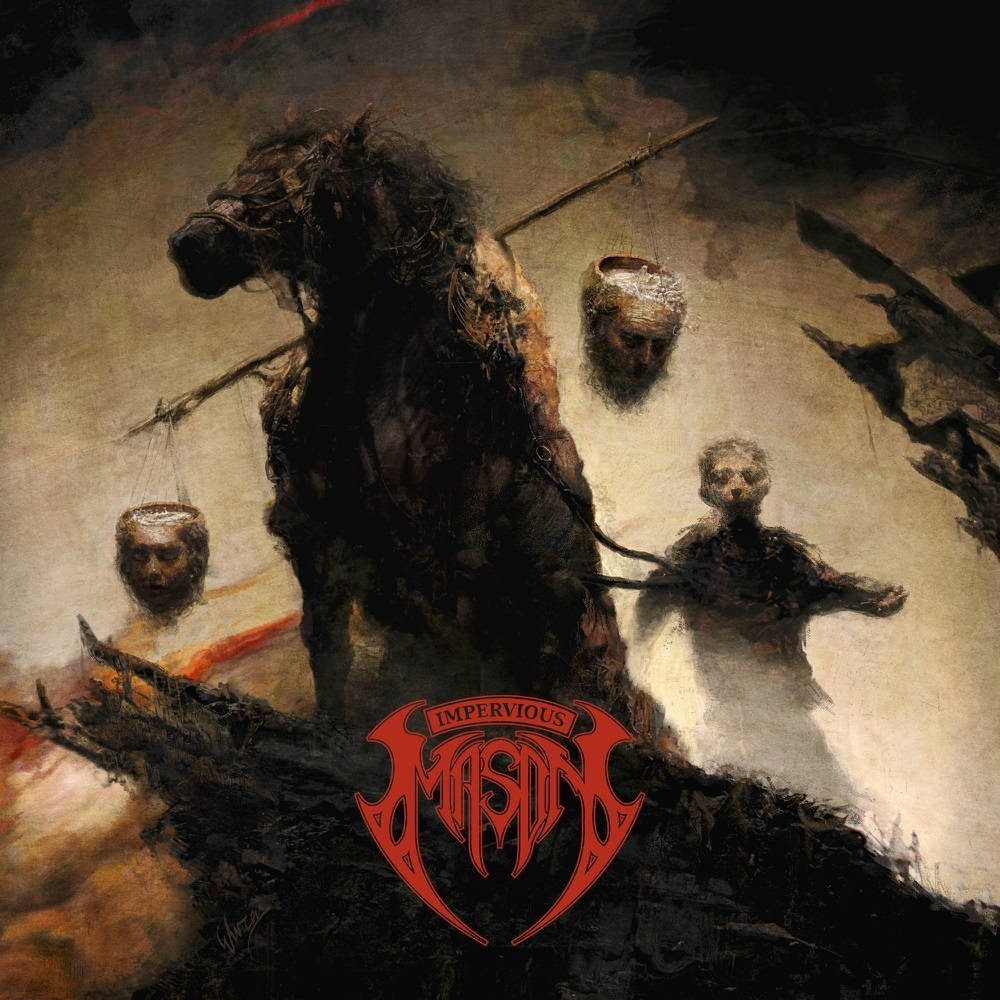 08. Mors Principium Est – Embers Of A Dying World
– “I developed this concept based on the lyrics to the track ‘Reclaim the Sun.’ I didn’t want to actually have the exploding sun on the cover, so I came up with another angle: The window reference in the song was dealing with the inevitable faith of humanity and the earth: being engulfed by the sun as it will moves into its red giant phase and expand beyond the earth’s orbit. The concept made me think of Vermeer’s famous painting ‘The Astronomer. So I thought it would be a nice touch to have the prophet (the band’s mascot) next to a window, disintegrating and turning into debris and ashes. The band wanted to have the exploding globe there as well, adding a ‘voodoo’ touch to the prophecy theme.” 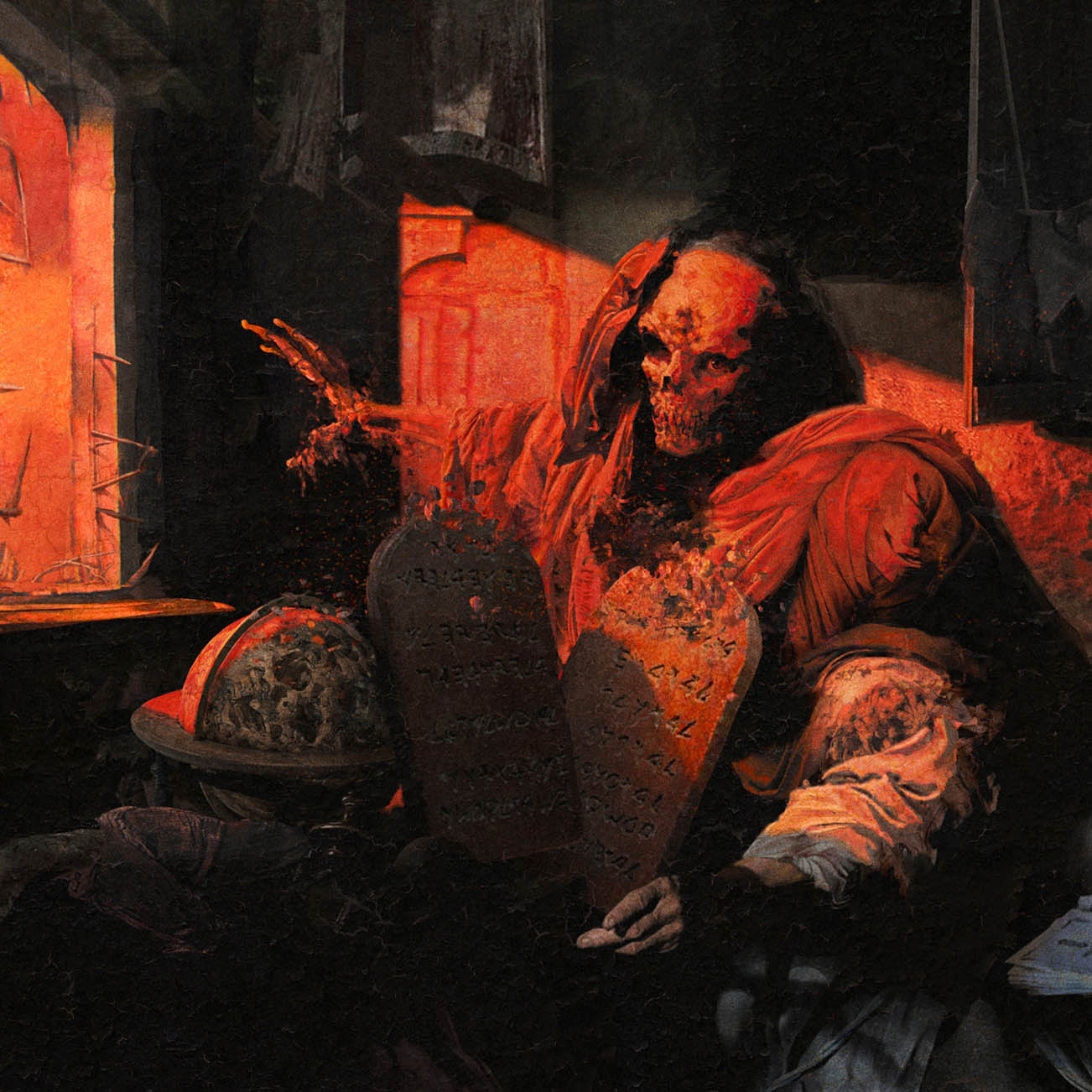 11. Testament – Brotherhood Of The Snake
– “Eric Peterson (guitar) told me of the title, referring to a secret society group—and I wanted to focus on the occult aspect of it without leaning on the already available myths. I pictured a ritual involving blindfolded figures coming out of chalices of black oil, holding scythes forming the teeth of a 3-headed snake… Looking for ways to incorporate the masonic pyramid felt like a great opportunity to use the classic Testament logo while adding something new to it, and also give it an active part in the plot. There are many tiny details adding to the atmosphere: red tongue bookmarks in the books, two more ancient-looking figures in the shadows hinting at the brotherhood’s lineage, two serpent-shaped fountain tubes pouring the black oil etc etc. The latter two were suggested by the band.” 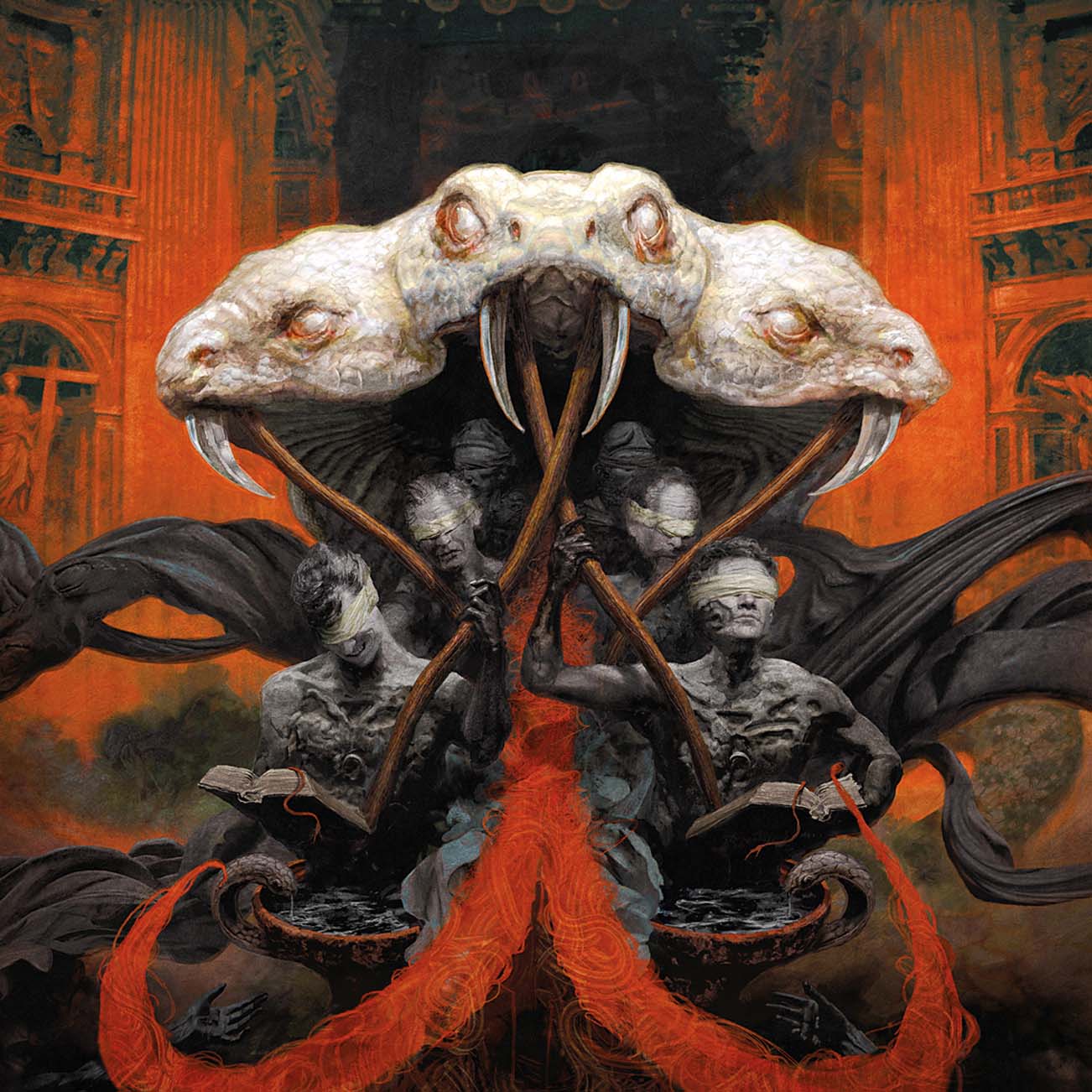 12. Thunderwars – The Black Storm
– “The band got the main idea from the Tarot card ‘The Tower’. It strongly correla…tes with the lyrics to the track “New Age Prophecy” and to the album’s themes as a whole. The band wanted to avoid the standard medieval rendering of Tarot cards and go in a more epic, old school Death Metal way. To quote the band: having this huge structure with the tiny people beneath it heightened the contrast between the human fragility and the ‘moloch’ when it comes to the unstoppable powers.” 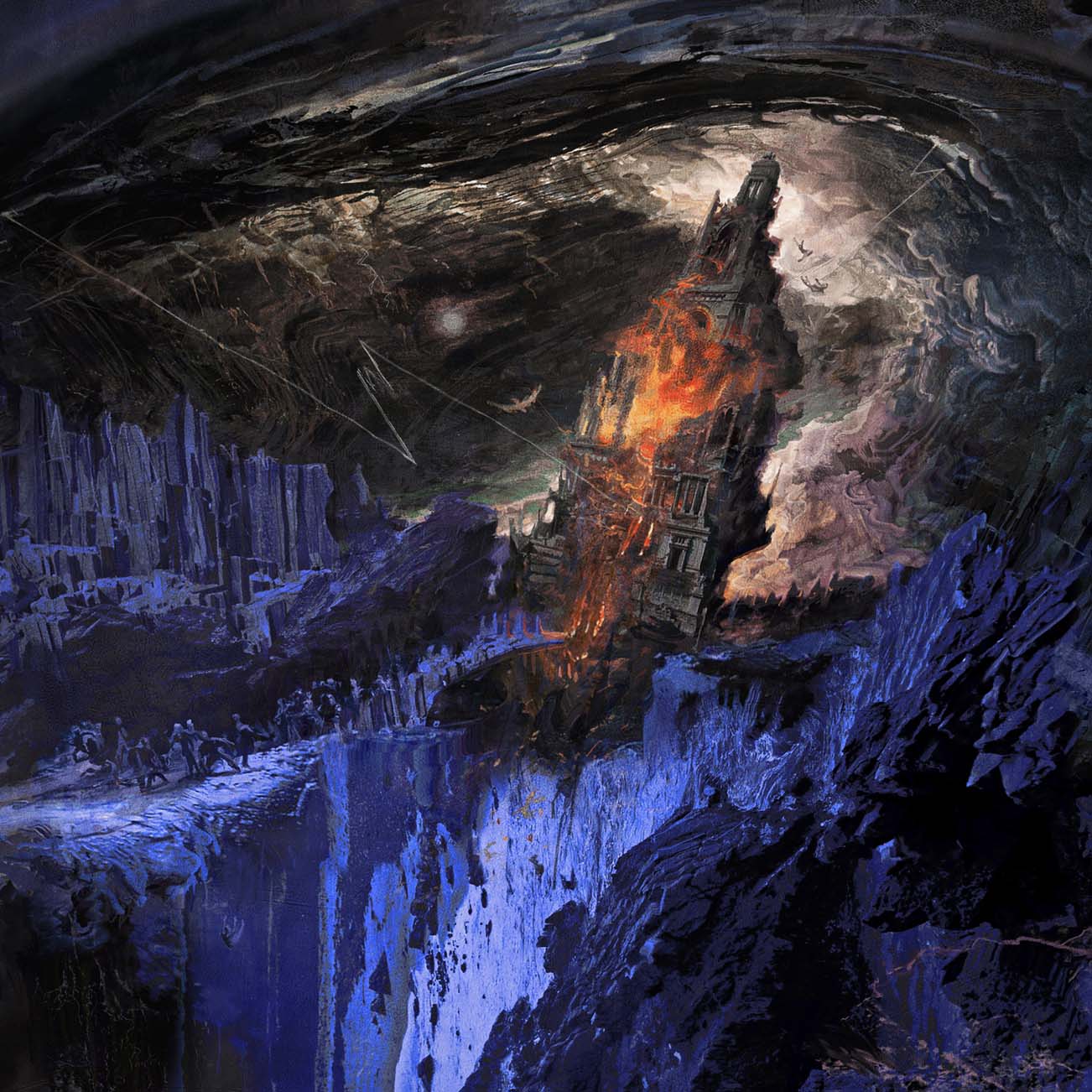 13. Thy Art Is Murder – Dear Desolation
– “Going through the lyrics, I noticed the metaphor of the wolf and the lamb appeared a few times throughout the record. I thought it grabbed the essence of the topics the songs touched upon: greed, oppression, cynicism, preying on and misleading the weak, the connection of fear and hope and the way this connects with faith and power. So I pictured a female wolf, feeding a baby lamb as if it was her own, all while looking at it with a chilling evil grin, licking her lips. She’s not nourishing the lamb—she’s preparing a bigger meal for herself.” 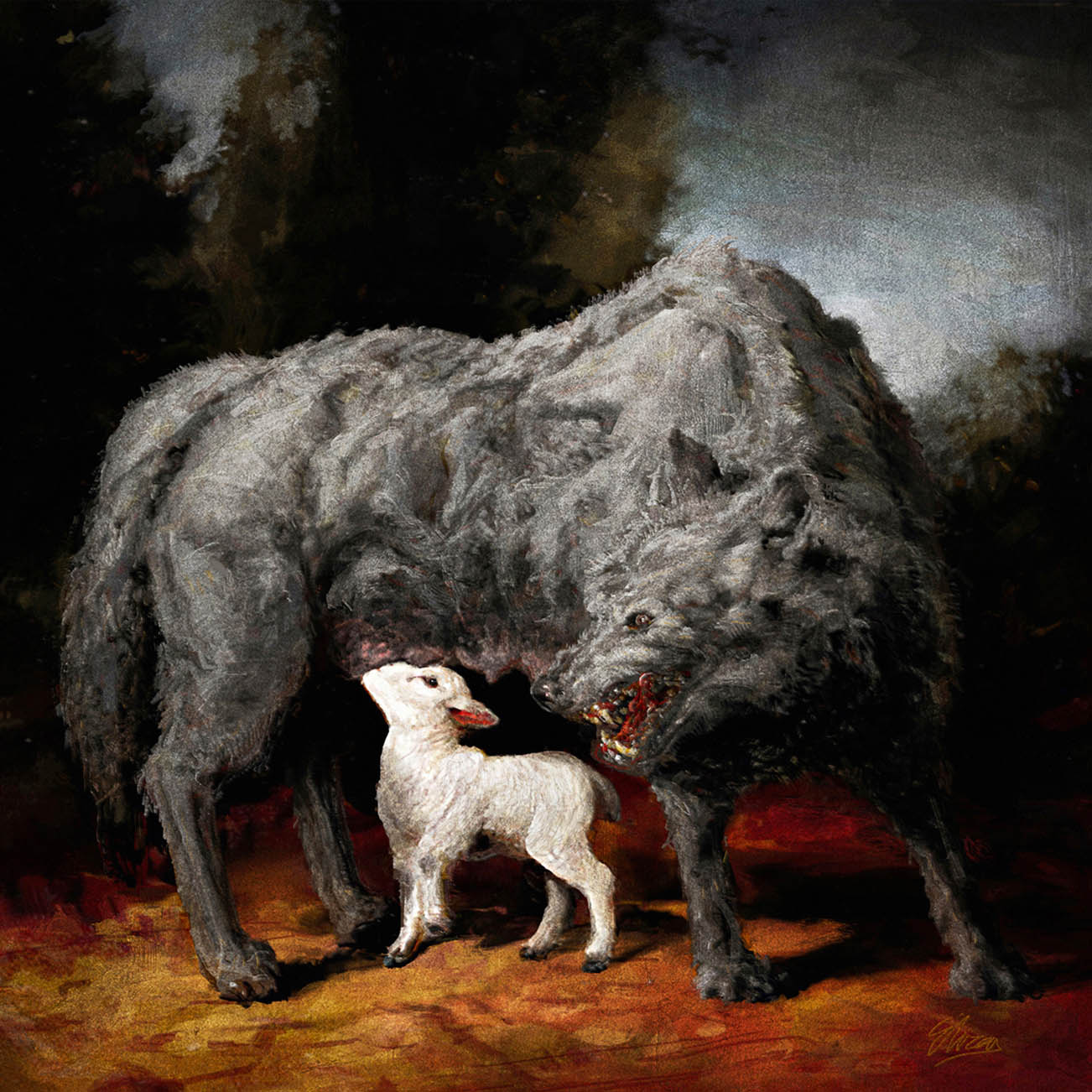 14. Venon Prison – Animus
– “When I got the lyrics from the band, a song called ‘Perpetrator Emasculation’—about castrating a rapist and force feeding him his own genitalia—struck me as the number one visual we could extract from the album carrying the biggest impact as an art piece.” 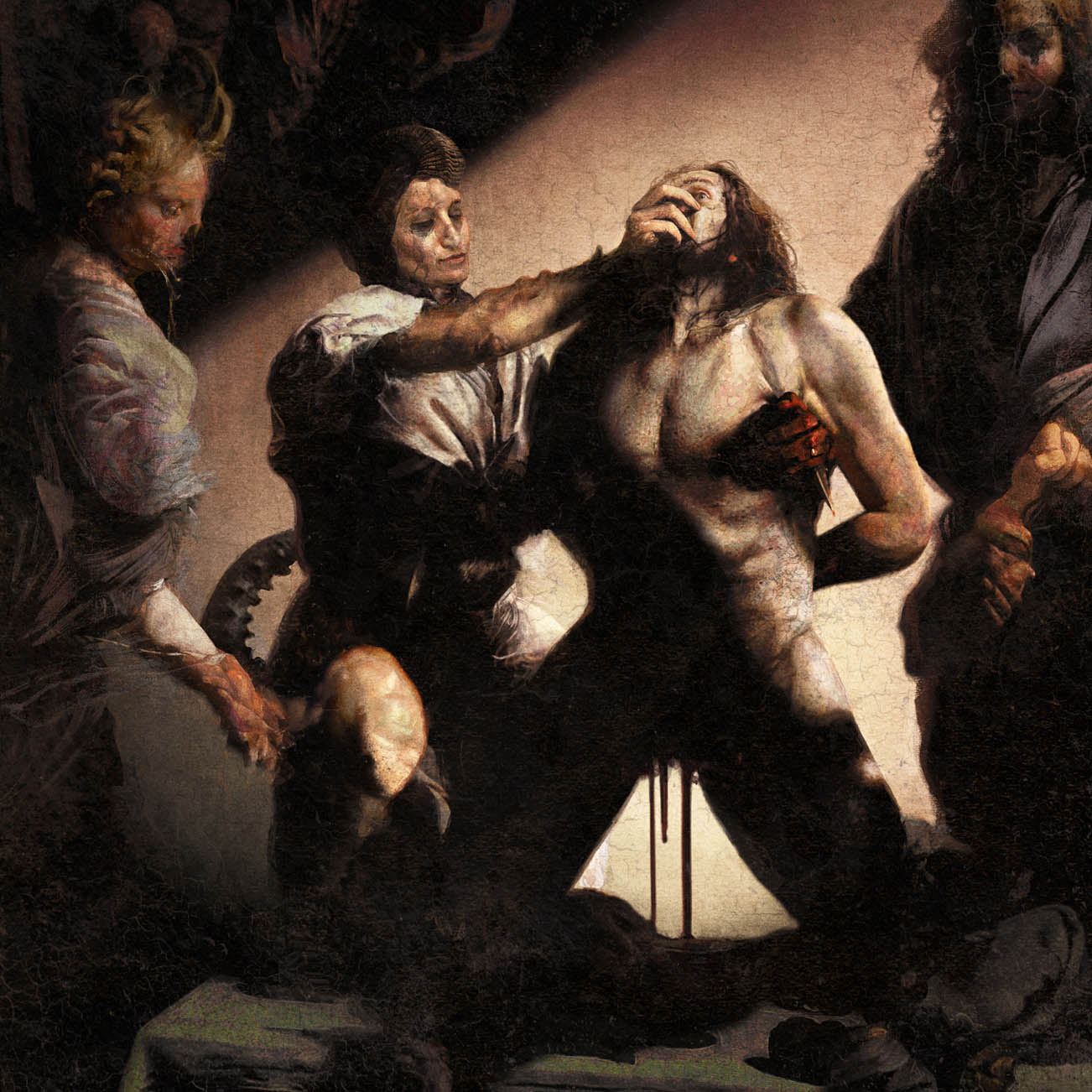