Released on June 16th via Toronto label Boonsdale Records, Peterborough, Ontario’s heavy rock/metal group Mokomokai gave us the deets on the crazy cover artwork for their debut recording, Poison Whiptail. Produced by Ian Blurton (Attack In Black, The Weakerthans, Cursed, Tricky Woo), the music speaks for itself and the packaged is only further enhanced by the Arik Roper-inspired imagery. Guitarist and vocalist John Ellis commented on the idea, creation and meaning thereof.

What was the inspiration for the album’s cover artwork?
Ellis: The art was mostly inspired by the work of Arik Roper who does a lot of work for bands like High on Fire, Sleep, etc. Lots of stoner bands. He’s a wizard, I’m sure of it. running off the steam from his influence this piece was an absolute blast to hash out with our artist.

Your new Poison Whiptail album cover is crazy-cool. Tell us about the artist and how you found him/her?
Ellis: The artist is my sister Mary, who teaches graphic design at Algonquin College in Ottawa. She’s currently working with some kind of new technology for 3D character design that I understand has huge implications for the industry. Considering I remember her making 3D magic eye graphics on Microsoft paint in the 90’s, she’s the right gal for the job. She’s damn good!

What were the partnership’s dynamics like? For example, was a specific look given, or did the artist have full free range?
Ellis: I came up with the initial concept a while back, but I know Mary’s work really well and we’ve always done great work together in the past. I usually don’t approach anybody without having put considerable thought into the ideas that I have, but I knew all I needed to do was explain the idea, pick a motif and wait for the first round of kickass variations to turn up in my inbox. 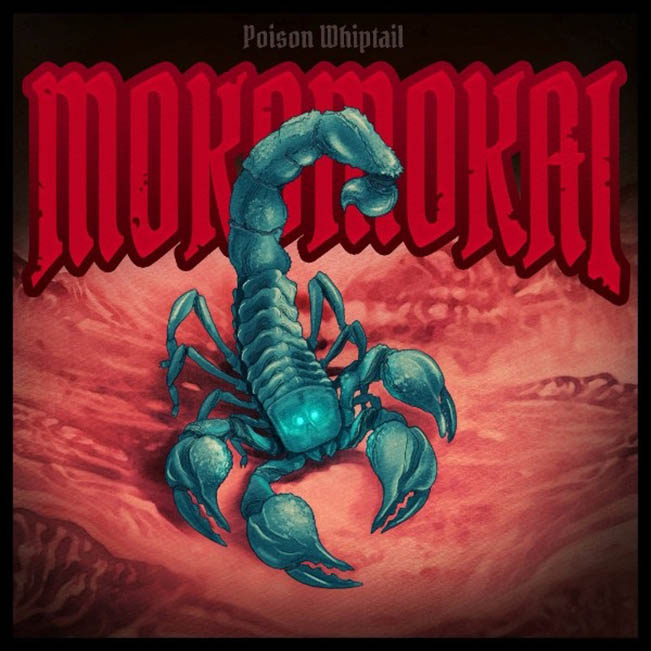 Did the artist who did the cover art hear the album before hand? Or, what kind of input did you give him/her?
Ellis: Well, she has a little girl who refused to turn it off for a couple months when I sent her the first mixes so I imagine so. hahaha

Have you ever purchased an album solely because of its album artwork? If yes, did the music live up to the artwork?
Ellis: Yeah actually, when I was a young dumb kid with laundry money I stole from home, I bought Number of the Beast by Maiden because of the art. Didn’t know much about them then. First album I ever bought, definitely a lasting impression. hahaha

When people look at the Poison Whiptail album cover artwork, what do you want them to see/think?
Ellis: I always dug the old creature metal and rock tunes like Priest’s “Painkiller” and Fleetwood Mac’s “Green Manalishi”. It’s not like you’ve ever heard of the creature or figure before but somehow when you look at it you recognise it. Excuse me while I go full spinal tap. hahaha

Have any favourite music-related visual artists?
Ellis: Arik roper’s a big one, Alex Grey too who does Tool’s album art. The documentary on his gallery in New York The Chapel of Sacred Mirrors absolutely blew my head apart.

What are your thoughts and/or the pros and cons about digital art versus non-digital?
Ellis: I’m a sucker for the aesthetic of an original piece of physical artwork, partly because I’m an old soul and partly because I’m no damn good at the alternative, but there’s definitely advantages of digital artwork. The depth of detail is just unparalleled. But when I see a wicked piece by someone like Frank Frazetta or something like that, that’s what really knocks me out.

Check out the music video for the song “Heavy Metal Sky”

What do you think are some of the cover artworks that have translated best/worst onto t-shirts and other merch?
Ellis: Can’t say anything particularly leaps to mind. Best, maybe the Celtic Frost artwork by H.R. Giger but only because I would translate all of it to a face tattoo even I was sober. Worst, maybe anything by Poison to go with how I feel about their whole thing.

Was the Poison Whiptail album art influenced by any of the themes explored on the band’s album?
Ellis: There’s the obvious Whiptail, evil space scorpion reference, but I guess there are some Westerny, deserty tunes like “Walkin Boss” which is about Cullen Bohannon from Hell on Wheels. There’s some other wilderness dwelling creature monster stories in there too like “Mountains of Madness”, named directly after the H.P. Lovecraft story from the Fantasmagoria magazine from way back. But it’s mostly meant to be a landmark to the tune that really got the ball rolling.

How do you think the Poison Whiptail album art will affect the listener’s perception of your album?
Ellis: I always really liked looking at album art when I got new records when I was a kid. Nothing bummed me out more than miscellaneousness and mediocrity when it came to it. So in that spirit, I trust when people are listening to the record and checking out the art they will find it to be a visceral compliment to the music.

Is the art for this album related to any of your previous album cover artwork?
Ellis: The closest thing I could think of is some early, more simple versions of the four armed scorpion that were printed on the backs of the Wizards in the music video we released for it a while back when it was just a single. The idea just kind of evolved from there.