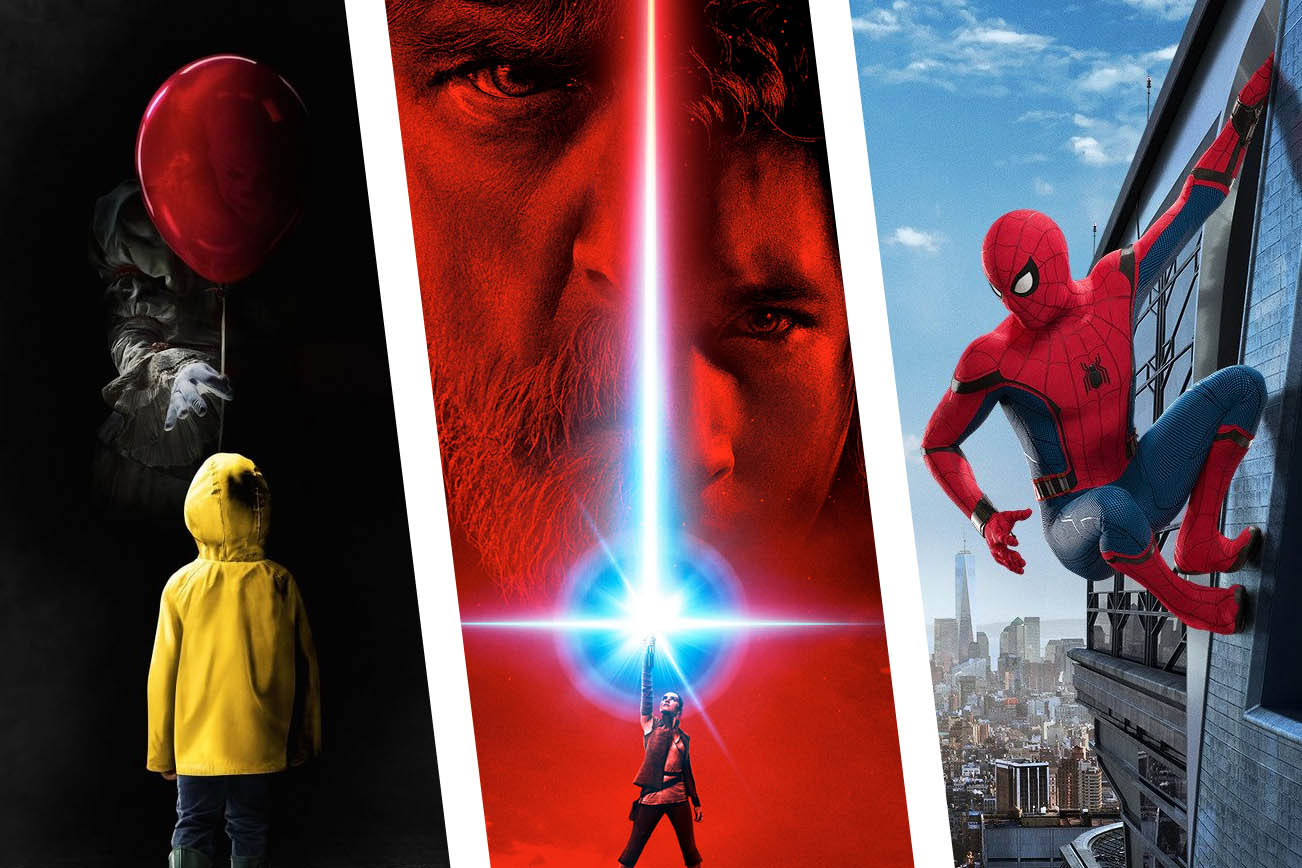 TOP 10 Most Anticipated Movies of the Second Half of 2017

This time last year, Hollywood had given us almost exclusively critical and commercial disappointments with the likes of Independence Day: Resurgence, Warcraft, X-Men: Apocalypse, Zoolander No. 2, and Batman v Superman representing some of the studios’ highest profile films. Thankfully, the industry is looking to redeem itself as 2017 is shaping up to be a phenomenally crowd-pleasing year for cinema. With a collection of hugely entertaining blockbusters like Logan, Kong: Skull Island, John Wick: Chapter 2, and Wonder Woman already behind us, there is no denying that this year is already proving to be far better than the last when it comes to movies.

Moving into the second half of 2017, there are still plenty of films to look forward to, ranging from intergalactic popcorn flicks to ‘80s-style horror nightmares. Numerous blockbusters and Oscar hopefuls that would have made my own personal list such as Molly’s Game, Battle of the Sexes, and American Made, unfortunately, did not quite make the cut: a powerful testament to the strength of this year’s upcoming slate. With so many amazing films on the horizon, it can be difficult to know how to spend your dollars, so here is PureGrainAudio’s TOP 10 most anticipated movies for the latter half of 2017.

10. Murder on the Orient Express (November 10)
– Murder on the Orient Express boasts one of the most talented casts seen since 2013’s American Hustle. The film stars Johnny Depp (Edward Scissorhands), Penelope Cruz (Pirates of the Caribbean), William Dafoe (Spider-Man), Judi Dench (Skyfall), Josh Gad (Beauty and the Beast), Michelle Pfeiffer (Batman Returns), Daisy Ridley (Star Wars: The Force Awakens), and Kenneth Branagh (Valkyrie) among others, not to mention an Academy Award-nominated director and writing talent from this year’s critically acclaimed superhero drama, Logan. The film is based on the 1934 Agatha Christie novel of the same name and follows detective Hercule Poirot (Branagh) as he endeavors to solve the murder of Mr. Ratchett (Depp) aboard a moving train and as the tagline suggests, “everyone is a suspect.”

09. Atomic Blonde (July 28)
– You would be forgiven for thinking this entire article has lost all credibility with the inclusion of a film entitled Atomic Blonde. The graphic novel The Coldest City on which the film is based may have a far superior title, but with the creative minds behind John Wick and the upcoming Deadpool 2 at the helm, action fans should not write the film off on name alone. The film stars arguably two of today’s highest-profile action stars in Charlize Theron (Mad Max: Fury Road, The Fate of the Furious) and Sophia Boutella (Kingsman: The Secret Service, Star Trek Beyond) and after the recent success of Wonder Woman, audiences are undoubtedly aching for an increased presence in powerful female action heroes – and rightfully so.

08. War for the Planet of the Apes (July 14)
– Approaching its release back in 2011, the vast majority of audiences expected Rupert Wyatt’s Rise of the Planet of the Apes to be watchable at best. Two sequels and over a billion dollars later, the franchise is cementing itself among the all-time great trilogies, in the discussion with the Dark Knight and Bourne films. The series has set a new standard for digital effects and has thus far chronicled the synchronous fall of man and rise of the apes, framed by the phycological struggle of primate protagonist Caesar (Andy Serkis). Now, with war brewing, Caesar will be forced to lead the apes in a final confrontation with mankind and their animalistic warmonger: The Colonel, played by Woody Harrelson.

07. Detroit (August 4)
– There are some stories so formative of American culture that they are impossible not to share on the big screen. Detroit tells one such story. The 1967 Detroit riot was among the most destructive in American history, its scale second only to events of The Civil War. Detroit tackles social issues still of relevance today, including those of racial discrimination and police brutality, and is being brought to life by two-time Academy Award-winning duo Kathryn Bigelow and Mark Boal of Zero Dark Thirty and The Hurt Locker fame. The crime drama features performances from a bevy of talented, young, African-American actors including Anthony Mackie (Captain America: The Winter Soldier, The Hurt Locker) and John Boyega (Star Wars: The Force Awakens, Attack the Block), who stars as a security guard suspected of crimes he did not commit.

06. Baby Driver (June 28)
– Baby Driver is proof that movie critics are not simply a collection of high-brow, white men in their sixties who partake in exclusive wine tastings as they reminisce about how vastly superior film was in the early days of cinema. Thus far, critics are absolutely loving this quirky, high-octane, music-fueled action/comedy/heist adventure. With a star-studded cast that includes Ansel Elgort (The Fault in our Stars, Divergent), Kevin Spacey (The Usual Suspects, Se7en), and Jamie Foxx (Django Unchained, Collateral), and one of the most memorable premises to hit the big screen in recent years, Baby Driver is sure to be a must-see for any movie fan. The story revolves around a young getaway driver (Elgort) with a health condition that requires him to listen to music at all times, as he faces a crime boss (Spacey) who threatens the safety of everyone he loves.

05. IT (September 8)
– After the recent success of Stranger Things, it seems the ‘80s are back in style, and this year’s IT reboot seeks to continue that trend. The first trailer received a staggering amount of attention upon its release back in March, garnering nearly 200 million views in just twenty-four hours – a record breaking statistic. Based on the novel by Stephen King, IT tells the horrifying tale of seven children and a murderous, shape-shifting clown, and could prove to rare treat for fans of the genre.

04. Kingsman: The Golden Circle (September 22)
– The original Kingsman: The Secret Service is certainly not a film for everyone. The movie’s grotesque violence and raunchy humour lend themselves toward a niche audience, but for those who find themselves within that demographic, Kingsman makes for a near perfect action movie. With the same creative team returning, fans can expect just as much stylish action and surprising substance to be present in the sequel. Kingsman: The Golden Circle will expand upon the lore of its predecessor, as Eggsy (Taron Egerton) and the newly resurrected Harry Hart (Colin Firth) discover an allied American spy organization known as The Statesman. Halle Barry (X-Men, Die Another Day), Channing Tatum (21 Jump Street, The Hateful Eight), and Jeff Bridges (Iron Man, True Grit) all join the cast for this installment of what is quickly becoming one of Hollywood’s most fun franchises.

03. Dunkirk (July 21)
– Dunkirk is a puzzling slot in this year’s summer movie slate. A period war epic is a hard sell to audiences in July, and the trailers thus far have made the film appear as though it would be much more at home with a December release – just in time for award season. However, Dunkirk is Christopher Nolan’s tenth feature directorial effort, and with a resume that includes the aforementioned Dark Knight trilogy, Inception, and Interstellar, it is difficult to claim the film will not be one of quality. The plot has thus far been kept fairly mysterious, but with Nolan behind the camera, it is safe to say it will be both highly intricate and epic in scale. The film stars several Academy Award winners and nominees such as Tom Hardy (Mad Max: Fury Road, Inception), Kenneth Branagh (Valkyrie, Macbeth), and Mark Rylance (Bridge of Spies, The BFG) as well as music superstar and newcomer to Hollywood, Harry Styles.

02. Blade Runner 2049 (October 6)
– Ridley Scott’s 1982 sci-fi noir Blade Runner is more of a cult classic than a widely-known blockbuster. Thirty-five years later, Canadian director Denis Villeneuve (Arrival, Sicario) is revitalizing the series with a new installment that is set to be the highest budget R-rated film in history. There is a strong possibility that Blade Runner 2049 will become the third sequel in history to be nominated for Best Picture without its predecessor accomplishing the same achievement, so science fiction fans will want to watch this in theatres, regardless of whether they have seen the original. The new film sees Ryan Gosling’s (La La Land, Drive) character seek the help of retired officer Rick Deckard (Harrison Ford) to prevent what is left of the world from falling into chaos at the hands of the replicants – a race of hyper-intelligent androids indistinguishable from humans.

01. Star Wars: The Last Jedi (December 15)
– It is difficult to argue that any other film deserves to be at the top of this list. After the record-breaking success of The Force Awakens, and the unprecedented box office results of spin-off film Star Wars: Rogue One, the franchise has undeniably come back into prominence in full force (pun intended). Disney has been secretive when it comes to plot details, but Luke Skywalker’s (Mark Hammil) new characterization (which was teased in the first trailer) is more than enough to get fans of the franchise excited. The eighth installment in the Star Wars saga sees the return of a multitude of classic characters, and may very well be the last time fans see General Leia Organa portrayed by Carrie Fisher (Star Wars: A New Hope, When Harry Met Sally). If nothing else, a trip to the theatres this December will at least keep you informed, as Star Wars: The Last Jedi is sure to be the most talked about film of the year and potentially even the decade.

Honourable Mention. Thor: Ragnarok (November 3)
– If ever there was a movie to get skeptics back on board with the superhero blockbuster, it’s Thor: Ragnarok. The first trailer, released back in April, is brimming with colour and personality akin to Marvel’s Guardians of the Galaxy, but with a dash of ‘70s hard rock thrown in for good measure. While many filmgoers may have been understandably put off by the previous two entries in the franchise, newcomer to the director’s chair Taika Waititi should be cause for serious optimism after the critical success of his previous film, Hunt for the Wilderpeople. Ragnarok will see Thor stripped of his godhood and locked in gladiatorial combat with The Hulk (Mark Ruffalo) upon its release this November.