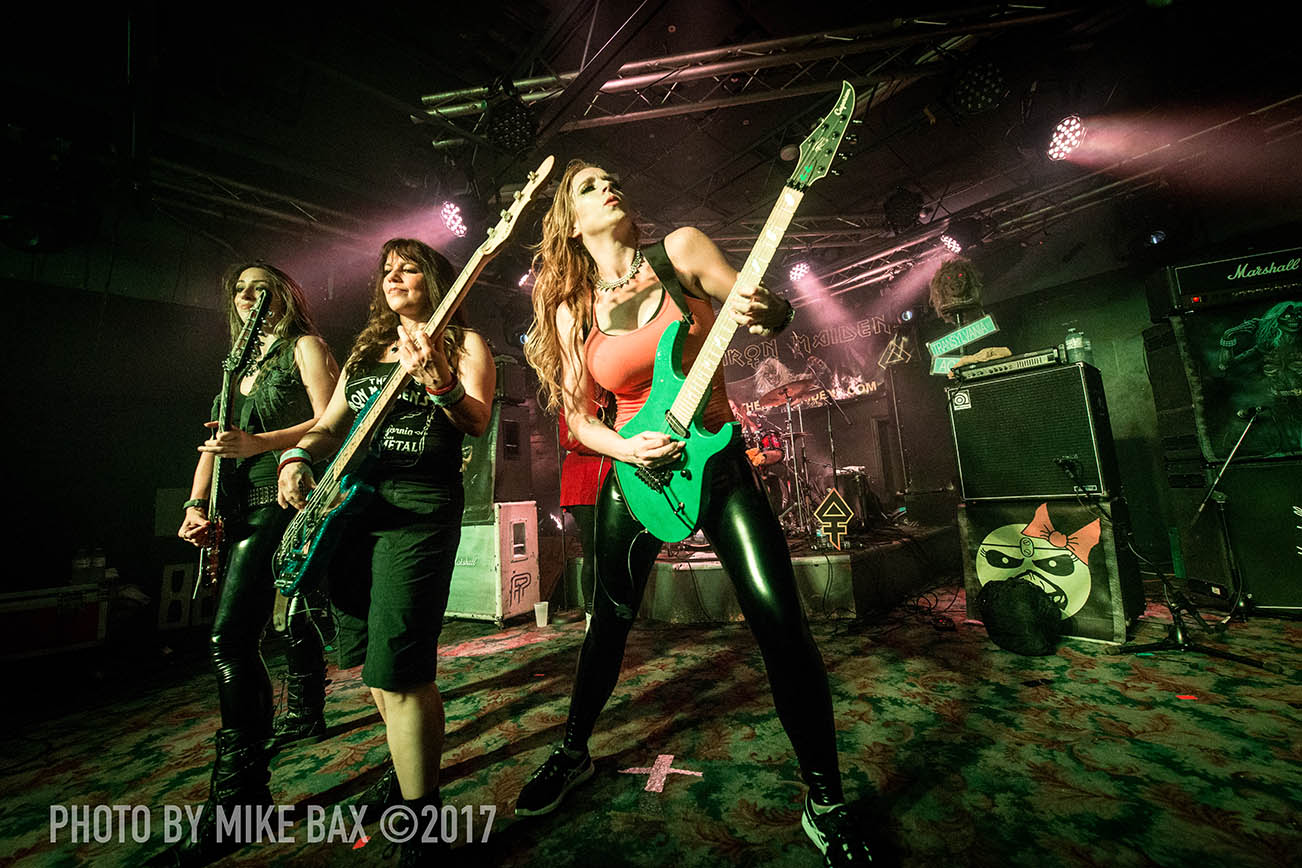 There can be no denying the hugeness of Iron Maiden and their impact on generations of heavy metal fans the world over. Arguably one of the biggest metal of all time, Maiden have legions of fans, along with a legion of musicians influenced by their material. Five of these musicians coexist in an Iron Maiden tribute band established in 2001. The L.A.-based group The Iron Maidens have had a long-standing mantra to proficiently play (and perform live) the back catalog of Iron Maiden. They do it better than anyone else in the world. And they just stopped by the Rockpile to perform a wonderful set of deep cuts lifting from the albums that make up the first ten years of Iron Maiden.

The Iron Maidens are Kirsten “Bruce Chickinson” Rosenberg (vocals), Linda “Nikki McBURRain” McDonald (drums), Courtney “Adriana Smith” Cox (guitar), Nikki “Davina Murray” Stringfield (guitar), and Wanda “Steph Harris” Ortiz (bass). This evening they performed four Paul Di’Anno era classics, and ten Bruce Dickinson nuggets, including relative obscurities “Losfer Words (Big ‘Orra)” and “Alexander the Great (356-323 BC)”. Add in appearances by Somewhere In Time Eddie and the original Eddie mascot for the “Iron Maiden” encore, along with the devil himself, who leaped on top of the crowd during The performance of “The Number Of The Beast”.

This evening was a sold-out performance. Only a few holdbacks were available at the door for walk-ups. Even with the air conditioning on, the venue got brutally hot – all of the girls were sweating buckets by the time they got to their last few songs. The performance this evening was close to flawless. A few of the songs performed tonight I’ve never even heard Iron Maiden play live… which made the evening extra zesty. After the show, the girls all came out to the merch area and signed merchandise and photos for patrons.

Support this evening was from Durty Little Secrets and Second Pass – both bands hailing from Toronto. Durty Little Secrets performed some competent covers (“Sex Type Thing,” “Crazy Train,” “Man In The Box,” “Whole Lotta Rosie” and “Youth Gone Wild”) along with a few cool originals. All musicianship was tight. Vocalist John De Medeiros posed with a fan at the front of the stage while singing, before heading into the audience to sing into the faces of a few early attendees. Second Pass performed eight original songs – their sound drawing from cornerstone classic rock artists of yesteryear. Vocalist Veronica McNamee has a wonderful howling vocal range. She sings in her bare feet, and spent a portion of tonight’s performance crawling about the front of the stage singing right into the faces of the audience up front. “Biting My Tongue”, “No One Will See” and “It’s Time” were the three tracks I liked the most.

Setlist:
Aces High
The Evil That Men Do
Can I Play With Madness
Wasted Years
Losfer Words (Big ‘Orra)
The Trooper
Alexander the Great (356-323 BC)
Purgatory
The Number Of The Beast
Still Life
Phantom Of The Opera
Running Free
Hallowed Be Thy Name
Encore:
Iron Maiden