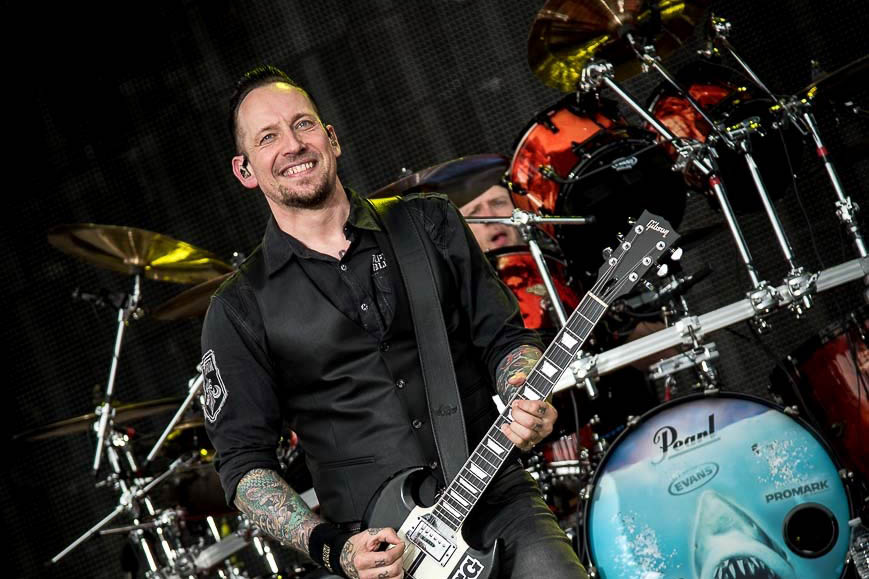 Day three of Rock On the Range 2017 was always the forecasted day for heavy rainfall. Naturally, it wound up being the day with the least amount of rain. The rain came on lightly as Biffy Clyro performed (true Scotsmen, they brought the rain with them) and then came on stronger during Volbeat’s performance – the band cutting their performance short at the request of the promoter. After an hour, Volbeat came back on stage, performed two final songs, and then Metallica closed off the festival with their headlining set.

With the interviews I had scheduled, and inability to be in two places at the same time – I had to pass on As Lions, Dorothy, Wage War, Every Time I Die, Suicide Silence, Zack Sabbath and The Dillinger Escape Plan. Dillinger went up against Deafheaven. While I wouldn’t ever say one band is better than the other (I love Dillinger and Deafheaven), my interviews with Volbeat, James from Biffy Clyro (20 minutes after Deafheaven started) and then a Deafheaven interview right after their performance kept me away from the Zippo Stage for a chunk of the afternoon.

This was another great day for rock ’Rangers’ with Sunday offering a stacked array of musicianship from all over the globe. The Easter Egg of the day was easily Biffy Clyro. Biffy is one of the three bands headlining Download Festival in the UK this coming weekend – their draw strong enough abroad that they would likely have bumped one of the Rock On The Range headliners to an earlier time slot if ROTR was a UK festival. They performed an amazing set, lifting heavily from their latest commercial release Ellipsis. Getting to see Biffy in broad daylight (well, in the dampening rain) was one of the reasons Rock On The Range 2017 strongly appealed to me this year.

I managed to get onto the grounds in time to see some of Mother Feather’s first performance on the Bud Light Stage. Described as ‘pop cock rock’, this two girl / three guy Brooklyn collective delivered a most enjoyable live spectacle that pulled from 1970’s era glam rock. Ann Courtney and Elizabeth Carena, adorned in bright red, were most entertaining to watch. Swedish four-piece Royal Republic was without a doubt one of the best moments of the day bringing their sound to North America for the first time as support to Frank Carter & The Rattlesnakes. This stop at Rock On The Range was over too quickly – the band working their way through half a dozen songs, and finishing up with a killer clip of “Battery” by Metallica that had everyone in proximity of the Bud Light Stage turn their heads for. Lead vocalist Adam Grahn has an amazing swagger, and the band comes off like The Hives or The Vines with a bit of Neil Fallon (from Clutch) coming through in Grahn’s vocal delivery. Over on the Zippo Stage, three piece Radkey bounced their way through an assortment of original songs as the three brothers (Isaiah, Solomon and Dee Radke) bounced through their performance. Their material is dirge-filled garage-rock that reminded me of some of the better 1970’s blank generation no wave music.

Nothing More performed on the monster mainstage mid afternoon. Jonny Hawkins, Mark Vollelunga, Daniel Oliver and Ben Anderson have a reputation for over-delivering a good time when they perform, and today was no exception. Towards the end of their performance when Jonny Hawkins was tilted forward on the band’s custom made drum kit so that Hawkins could stand atop of the mechanism and grind out some aural effects was one of the spectacles of the festival. The band then upped the ante on this spectacle, culminating in a drum solo that had each band member bashing on side stage mounted drums together. UK three-piece Dinosaur Pile-Up brought their buzz-saw guitar riffs to the Zippo Stage for a wonderful fourty minute performance of pop-punk. Matt Bigland, Mike Sheils and Jim Cratchley have also been on the road with Frank Carter & The Rattlesnakes, Royal Republic and Chevelle gaining new fans every show they perform at.

After SiriusXM Octane/OzzysBoneyard/Liquid Metal DJs Kayla Riley, Jose Mangin and Shannon Gunz finished introducing The Pretty Reckless, Taylor Momsen delivered a heartfelt tribute to Chris Cornell before the band ripped into their wicked live set of material. George Clarke from Deafheaven self deprecatingly described Deafheaven as ‘perhaps the weirdos’ of the day. Weirdos, they may be – I’d maybe describe them as ‘awesome’. A feather in their cap as Metallica stood watching them perform side stage. Clarke went to the crowd at one point touching hands with some of the audience and getting a hug from one of the guys at the rail front and centre. They played five songs over fifty minutes, including a killer live performance of ‘Beach House’ from their amazing Sunbather album.

A late afternoon performance from Primus was a total treat today. Les Claypool, Larry “Ler” LaLonde and Tim “Herb” Alexander delivered an hour of their bass-heavy material. ‘Frizzle Fry’ and ‘My Name Is Mud’ were totally epic live. The last band on the Zippo Stage was the mighty Amon Amarth. This Swedish five piece band even brought along Bettan their Viking ship with drummer Jocke Wallgren perched atop it at the rear of the ship/stage. Fans in the crowd held up plastic swords and chanted along throughout the entirety of the band’s performance. Volbeat delivered ten songs at Rock on the Range, their set broken apart by that storm that blew through. ‘Sad Man’s Tongue’, ’16 Dollars’ and ‘Lola Montez’ were easily the standouts from their amazing performance.

Against all odds, the weather held for Metallica. James Hetfield, Lars Ulrich, Kirk Hammett and Robert Trujillo took the stage later than scheduled and performed their full show – delivering four new songs from Hardwired… to Self-Destruct this evening. “Hardwired”, “Atlas, Rise!”, “Now That We’re Dead” and “Moth Into Flame” along with a fan-fueled selection of deep cuts delivered the coup de grace for the Rock On The Range weekend. It was a festival plagued with challenges, but a great festival all the same. The promoters did a great job keeping things safe and organized, and fans were treated to a showcase of some of the best there is to offer in modern rock and metal.