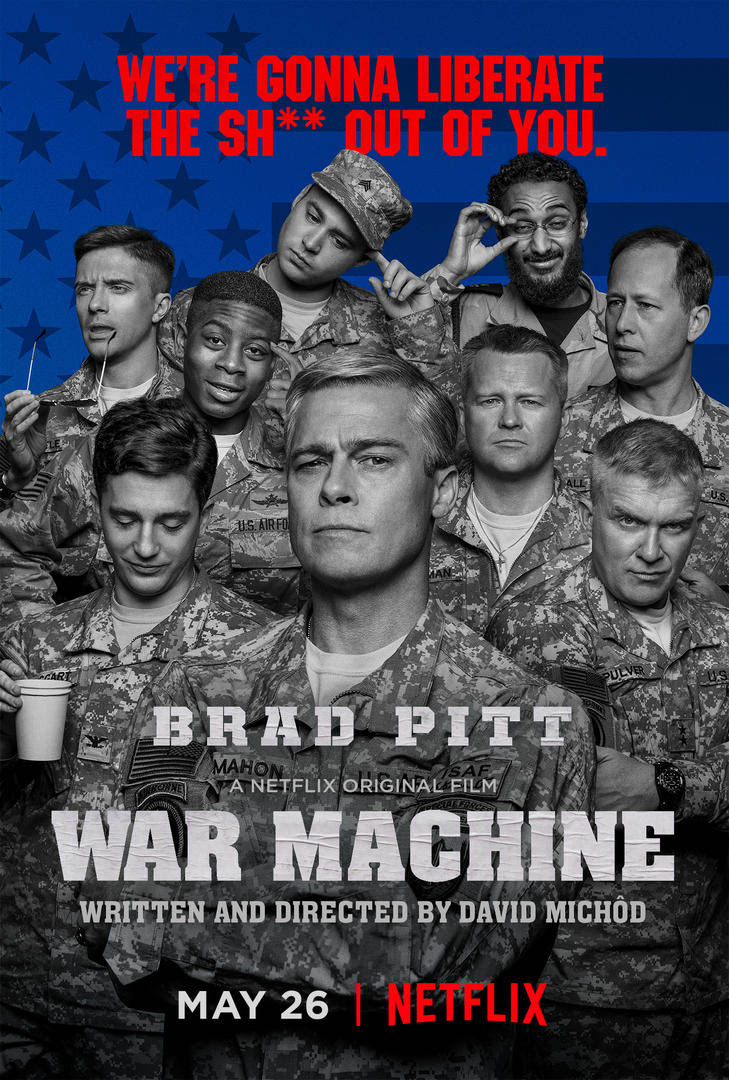 It’s an interesting time in pop culture, folks, because as the wheel of time begins to turn, we all know there are growing pains with every transition. Recently, the Netflix original film Okija was booed to death during its premiere at the Cannes Film Festival. Major studios are up in arms, making sure no Netflix film sees a theatrical release, despite the fact Amazon Studios has already done so three times now.

The tides are turning in the world of film, and the online studios seemed destined to inherit the Earth, despite any uproar Hollywood may make. The fact is: The meteor has already hit the Earth. Who’s to say when the dinosaurs are going to die, but Netflix is already dominating in the TV space, and it looks like they have their sights set on film next. Enter the new Brad Pitt movie War Machine. Now buckle up boys and girls, because regardless of where you side on the issue, this is where things get interesting.

War Machine is a movie made in a very modern sense in EVERY sense of the word. It’s a dramatic story for mature audiences that deals with everything from war, politics and economics, to sociology, culture and the media. It’s essentially a perfect third act in Brad Pitt’s trilogy of ideas revolutionising modern American life that began with Moneyball, continued with The Big Short, and now is being rounded off with War Machine.

Not only is Pitt a co-producer on all three films, but he’s getting three of the biggest things America has dealt with in a chokehold. After taking on America’s pastime, then the housing market meltdown and financial collapse in 2008, he is now dealing with the abysmal ongoing invasion of the Middle East in a post-9/11 world. Baseball, capitalism and now the military industrial complex? Wow. Did anyone mention that all three films are based on true stories? Well, long story short, Pitt is fearlessly making the movies most studios don’t have the guts, brains or soul to make in this modern climate of franchise fatigue.

The film is the tale of Glen McMahon (Pitt), a born and bred military man that rose through the ranks to become a General after graduating from both Westpoint and Yale. McMahon and his handpicked squad of quirky-but-brilliant soldiers have been charged with the task of turning around morale within the troops and citizens of Afghanistan. McMahon has to figure out a way for the American army to win an impossible war while navigating political backlash, culture clash, insurgents, terrorism and of course, trying to keep their humanity intact.

It’s more of a war of public relations, the winning of hearts and minds, more than any kind of war fought on the battlefield.

Not only is the movie well crafted, shot in a very slick way, chock–full of sharp dialogue, but it’s wonderfully crafted for the Netflix audience. So, despite the fact that Hollywood is trying to put Netflix in a chokehold, the real victory of War Machine is that it refuses to be held down by any industry. Netflix is making it very clear that they’re not here to win over anyone in show business, simply because they don’t have to. They make movies to the people any real studio answers to: the audience. So, although the movie itself might be about a war on failure, congratulations Netflix because you’re winning a battle audiences thought they lost a long time ago, and that’s making movies MATTER again.