Claremont, California’s hard rock group In Urgency released their new ten-track recording, Painting Parallels on May 23, 2017, and recently hit us up to talk tattoos! Be sure to stream their new album below (and purchase your own copy via Bandcamp here) and check out what members Chris Anderson (vocals, guitar, keys) and Michael Capuano (bass, sound design) had to say about their ink.

When, where and what was your first tattoo?
Chris Anderson: My first tattoo was done on some dude’s kitchen table in his apartment with his family watching. It was a small treble clef on my stomach. I was 14 and it was some guy that a friend of a friend knew so we decided to save up 30 bucks and go knock on this guys door. Sure enough, it happened.

Michael Capuano: I got my first tattoo when I was 18 over in Southern California. The first one I got was some piano sheet music for a musical piece called “To Zandarkand” written by Nobuo Uematsu for a video game called Final Fantasy X. It’s a beautiful and emotional piano piece I really connected to as a kid. It’s really the first major inspiration I had to pick up an instrument. It was a fitting first tattoo for me.

Do any of your tattoos have a particularly special meaning behind them? If so, do share man!
Anderson: Of all the work that’s been done on me, I’d say that what’s on my chest carries the most weight. Around the bottom of my neck, all the way down to the top of my stomach reads the words “A most beautiful ruby red”. It’s from a Third Eye Blind song called “Slow Motion”. This specific line refers to the moment a girl is overdosing on cocaine. Right before she dies, her nose starts to bleed and that’s how he describes it, “A most beautiful ruby red.” That, to me, carried a message of seeing the beautiful things within the ugly things in life. It’s a reminder to me that you can find beauty anywhere, no matter how grim things may appear.

Capuano: I like to think that all of my tattoos have a special meaning. I don’t really get anything I haven’t thought about. There is one that I have that gets a lot of attention and I think is an important message that a lot of people relate to. I have the words “There Is No Design, Your Flaws Are Fine” printed on my arm and I find a lot of people coming up to me commenting on how they really need to remember that. It seems to resonate with other people more than any of my other tattoos. The words come from a song called “Young Pilgrims” from a great band The Shins, I altered the phrasing to have a more personal meaning for myself. 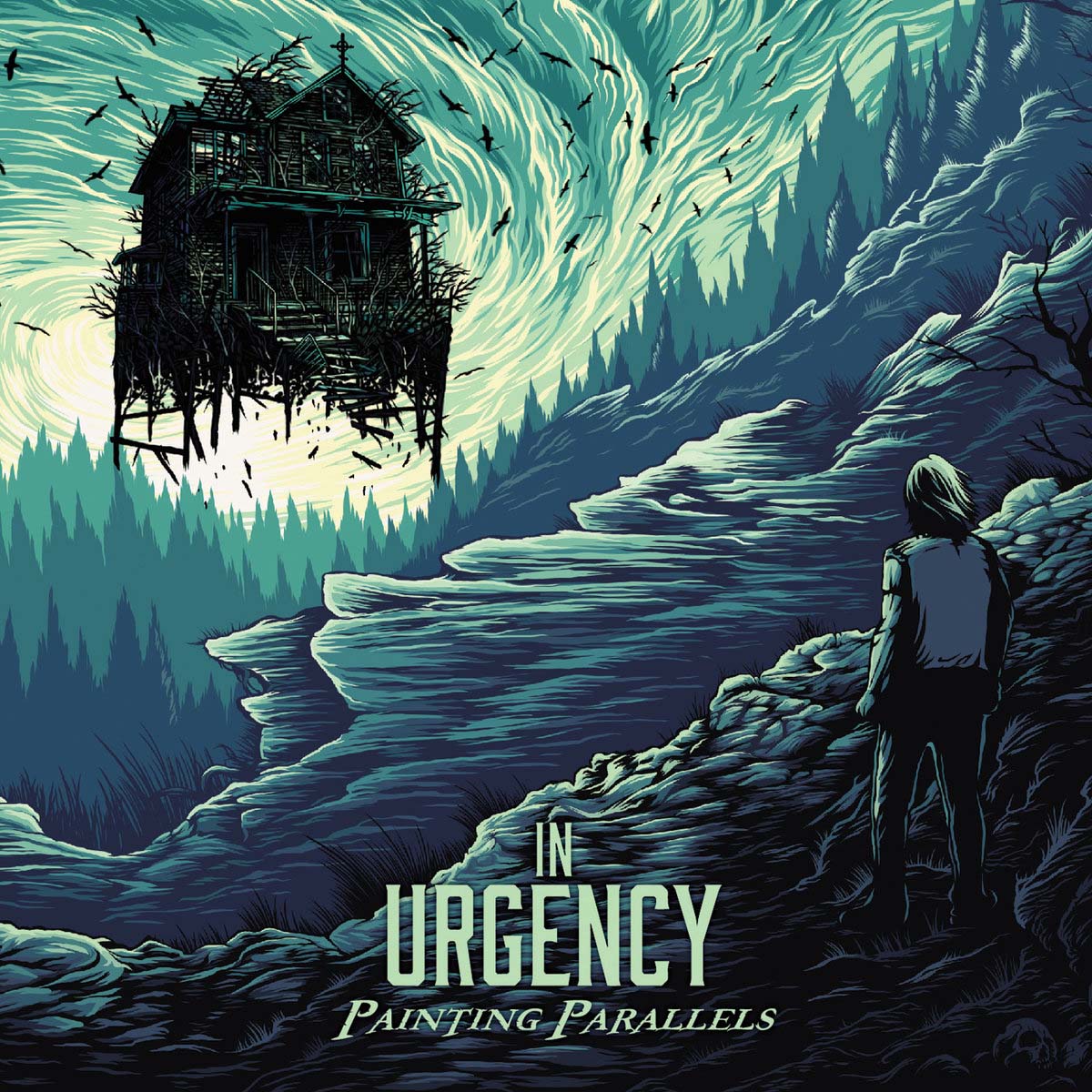 Do you have a specific shop or artist that you frequent (insert shameless plug time!)?
Anderson: 90% of what’s on my body has been done by one guy. He’s been a good friend for a long time and I can honestly say I know he doesn’t want the plug. Sounds crazy I know, but he doesn’t really ‘like’ to tattoo much anymore. He just happens to be incredible. I literally have to fly across the country and stay at his house for a week and bribe him to get it done. It’s a really dysfunctional way to get it done, but I guess that’s just how we do it.

Capuano: Yeah my main artist I really enjoy working with is my buddy Antonio, he is an amazing artist and gets into so many different mediums of art. He isn’t one for mass new clients for I’ll keep his info private from the mass internet haha. If you wanna get ahold of him contact me through the band and I’ll put y’all in touch. He has always come to my personal home for our tattoo sessions and we have an open dialog on how the artwork ends up. He has become a friend over the years and I look forward to continuing work with him.

Do you have any new tattoos planned or underway? Give us the dirt, dude!
Anderson: I try and keep to one central area at a time and make sure that area’s finished before I move on to starting other tattoo projects. I loathe the look of unfinished work. For the past 4 years it’s been getting my left arm completely sleeved. There are all two very small spots left to be filled, but it’s at the point where I’m not bothered by it. It’s all Alice in Wonderland themed with a feature of a Hunter S. Thompson portrait on my inner bicep. Next in line is my stomach though. As of now, it’s going to be a landscape of sorts with a haunted castle and bunch of other creepy stuff around it to fill it out.

Capuano: Yes I have several planned but have not set aside the money just yet. I have a plan for my upper right arm to complete the sleeve. The bottom half is based in old school Los Angeles vibes to represent where I came from and where I built my company. I spent a lot of my youth building my dream in the streets of LA so the bottom half of my right arm has been inked for that. The top half which I hope to tackle next is going to transform into a forest/mountain setting to represent where I am going and where I call home. I moved out of LA into the mountains recently and I want to chronicle my life journey through my tattoos. I also am planning on getting my dogs tattooed on me because they are best beings in the world.

Have you seen any fans with a band tattoo, anything crazy memorable?
Anderson: We have yet to see our first In Urgency tattoo. I’ve had one girl ask me to physically write down part of the chorus to our song “Stitches” and she was planning to get that tattooed on her arm. I was blown away, even by the gesture. I’m not sure that she’s done it, we fell out of touch. That’s the closest I’ve known of someone wanting to do it. I don’t know how I’d feel if someone went through with it though, that’s an honor I’ll always feel somewhat unworthy of.

Capuano: I have not been made aware of any, I would be very surprised and honored though.

We know you have one… tell us about that stoned/drunken joke-tattoo you once got….
Anderson: Oh man. So I must’ve been 19 or 20. After I moved away from home to go to school it was pretty seldom I got to go back and visit. Where I grew up, we were a pretty tight-knit group of friends so whenever I did, we made sure to ring it in pretty recklessly. I remember it being right before Mother’s Day when I made my way back home for the weekend. Naturally, everyone congregated at my friend Miles’ house. We always played darts, had bonfires, did whatever we wanted there. After a long night of mass consumption and heavy intoxication, he decided to announce that he’d gotten his first tattoo gun. (Mind you, he’s never expressed interest in wanting to be a tattoo artist, he got it on a whim.)

Of course, everyone started throwing around the idea of “dude, let Miles do his first tattoo on you!” Everyone thought it would be funny, but nobody stepped up to the plate. Meanwhile, I was in the background drawing up what I was going to have him do. When I was done I walked up and was like “this is what I want, and this is where I want it”. I lowered my pants so everyone could see my extremely white, right butt cheek. After the enormous uproar of ridiculousness, we proceeded to tattoo “I <3 Mom” on my ass. My mom cried when I showed her two years later… weirdly enough out of being proud, not being upset. Capuano: Haha. I actually do not have any laid back I’m hammered tattoos.

Do you have any tattoos that you now hate, want to replace, or have covered up, and why?
Anderson: I’ll probably cover up my first tattoo. Not because I hate it at all, it was actually somewhat well done considering the circumstances of how it was done. But more-so because it’s just in the way of a bigger, more-grand idea I want to fit in that spot on my body.

Capuano: I have no regrets with any of my tattoos.

Check out the band’s full album stream of Painting Parallels

Have any tattoos that were painful. Like made you cry, see white light, and regret being born?
Anderson: I’ve had some pretty sensitive areas touched on. If you’ve ever had any work done, you know that some spots are more sensitive than others. The side of my ribs were pretty terrible. The armpit was pretty bad, my hand sucked, inner bicep was nuts. But the most painful (by FAR) was the front of my ribcage, right above my stomach. This is the bottom half of the “A Most Beautiful Ruby Red” piece. I remember being in the shop in Pasadena, CA (Shogun Tattoo) and my buddy Tony Action was drilling into my bones. After about two hours, I called my girlfriend and was like “Yo, I need to drive as fast as humanely possible out here and bring me some kind of pain medication.” Apparently “as fast as humanely possible” to a girl means “yeah, I’ll be there at some point today.” There were literally three or four times I was on the verge of blacking out.

I’ve broken bones, gotten stitches, smashed my face into trees, all of it. I’ve never felt pain like this. She showed up like two hours later (we were almost done) and I was still so pumped to kill the pain, I ate four of whatever she put in my hand. Turns out they were insanely strong muscle relaxers that had been prescribed to her for her scoliosis. We finished up like an hour later, said our goodbye’s and I was on cloud 13. Went straight passed 9. Her, myself, and a friend she brought with her went to eat at this Italian joint next door. Before we even got our order in, I was drooling into my water. It probably looked they were kidnapping me because I no motor function whatsoever, couldn’t talk, I was a limp collection of flesh and bones. It was pretty bad. Slept really well though.

Capuano: The most pain I have had would have the be the top of my inner wrist, that was pretty painful on both arms. Very sharp pain right there.

If you HAD to get someone’s face tattooed on you, who’s would it be and why?
Anderson: Well I’ve already gotten Hunter on my arm. If I HAD to do another face though, I’m not sure. I feel like portraits are usually done out of memories sake. Like when someone passes on. Most people I know and love are still alive, minus a few (RIP). I wouldn’t want to put that juju on anyone by saying I’d tattoo them on my body so I don’t really want to answer that. Maybe Will Ferrell if he doesn’t live forever.

Capuano: If I had to I would get my parents’ faces haha.