Having descended twelve floors to the lobby, I pace back and forth across the polished tile of a corridor. An increasingly suspicious security guard glances my way but makes no effort to find out why my palms are sweating so much. If he asks, I know just what I’ll say.

I’m about to interview the lead singer of one of the biggest hard rock bands in the world. A band I’ve listened to regularly since I was fourteen years old. This is good. This is normal. I’m fine, why do you ask?

Last night I listened to Seether’s brand new album, out May 12th, called Poison The Parish. (It’s honestly fantastic, so be sure you go check it out. Or read my review.) With the album’s gritty guitar riffs still careening around my cranium, I finally lift my phone and press “Call.” Midway through his worldwide press tour, Shaun Morgan picks up a buzzing phone in London and says, “Hello?”

We start off by talking about why this album is such a major milestone for the band: it’s the first release from Shaun’s very own label imprint, Canine Riot Records. What’s the story behind the new imprint? “I wanted to find bands and give them careers,” Shaun says, “and at least give people opportunities that mostly get overlooked. Because A&R guys don’t really go around watching bands in bars anymore.” A worthwhile goal if I’ve ever heard one!

Check out the video for the track “Let You Down”

This is also the first Seether album that was produced solely by Shaun himself, and he explains that after working with and learning from legendary producers like Brendan O’Brien, he started to realize that he could handle the producing on his own. “That’s when I started believing in myself as a songwriter,” Shaun says. That’s not to say that everyone else shared his confidence—“At first everyone was terrified,” he says with a laugh. “But they humored me.”

Shaun finally felt liberated to write and record the songs just how he wanted, but that freedom was hard-won. He tells me about Seether’s years with Wind-up Records, and it sounds like things weren’t exactly peachy. “They told me my songwriting was crap,” he says. They exerted way too much control over not just the songs themselves, but also which songs ended up on which record. It got so bad that to Shaun, it became an utterly “soul-destroying” experience. “I almost quit the business many times because of the A&R and the owners over at Wind-up,” he says. I can practically see him shaking his head and rubbing his forehead on the other end of the line.

But fortunately, all of that is finally in the past. “With these guys believing in me, it just made such a huge difference,” he says, tangible relief filtering through his voice. With this new album, he felt free to write “stuff that was fun and reminded me of being a kid, and reminded me of when I was angry and had a whole bunch of things to say.”

“That was the point,” he continues, “to re-embrace where we started and to return to that in some way, but also as adults without that childhood whimsy.”

Alright, that’s enough about the new record… I desperately need to ask Shaun about a strangely controversial chapter in the band’s history. Back in 2011, Seether appeared on the late-night TV show Conan, where they created a joke video chronicling Shaun’s totally fake obsession with Justin Bieber. Though initially hesitant, bandmates Dale and John agree to take the band in a more “Bieber-esque” direction, and Shaun claims he has officially changed the band’s name from “Seether” to “Sieber.”

The catch? A lot of fans thought they were for real.

“They literally thought, ‘Okay, well now this band’s lost their minds,’” Shaun recalls. “It’s almost like you can’t even have a sense of humor anymore because people just don’t get it.”

“But man,” he says, “for a moment there, there was this uproar that I really watched in fascination because it didn’t make any sense.” We both have a good laugh. 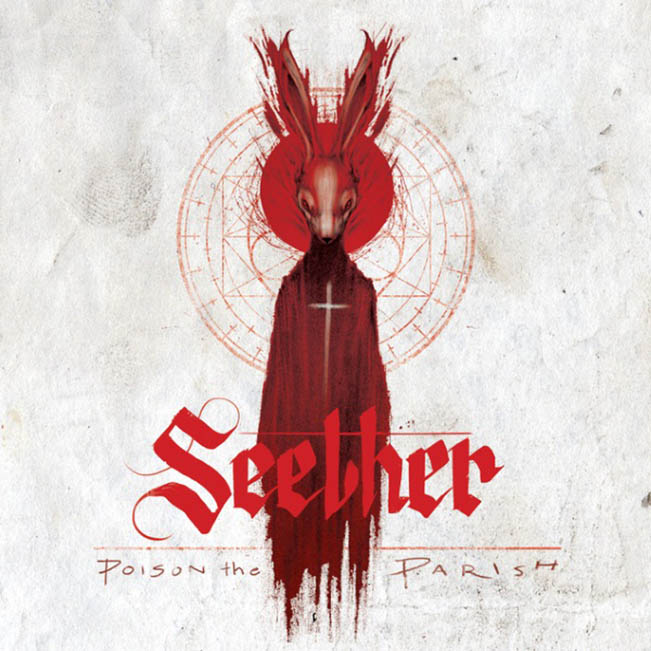 Next, I throw Shaun another curveball: what’s the most embarrassing moment of his life? He insists there are quite a few moments that come to mind, but he starts telling me about the time he approached legendary guitarist Joe Satriani after a Chickenfoot show. “I was hammered . . . And I said, ‘Hey man, can you do me a huge favor? My buddy’s in love with you. Can you just go over there and pretend to hit on him?’

“Of course, Satriani has no sense of humor when it comes to that shit,” Shaun continues. “So he literally looked at me like I was a piece of shit he stood in, and then stormed off. And then, of course, I felt terrible . . . so yeah, that was embarrassing. Because you meet a guy that’s a guitar god, and all you can do is leave a really bad taste in his mouth… That’s not the way I wanted to go out, man.” I silently wonder if any of Shaun’s fans accidentally did the same with him, making a bad first impression with a man they’d also consider a “guitar god.” But hey, at least it makes for a great story.

Lastly, I asked Shaun if there is anything about him that he wishes more people understood. After thinking for a moment, he sighs and says, “We just don’t generally take ourselves very seriously, and I think people don’t get that. We take music seriously and we take that side of our business seriously. But for the rest of it, we just like to have a good time.”

There’s a wisdom in Shaun’s laid-back approach to life, and it reminds me of one of my favorite quotes. I mention how Hunter S. Thompson once said, “Life has become immeasurably better since I have been forced to stop taking it seriously.”

Shaun chuckles. “Words to live by.”

If you want the inside scoop on the band’s “secret weapon” during recording, which song wakes Shaun up every morning (hint: it’s off the new album), and what day was the best of Shaun’s entire life, listen to the interview yourself by clicking above!

Check out the video for the song “Save Today”