Handmade Festival is a “music and arts” festival in Leicester hosted at the O2 Academy and its adjoining venues. I spent the Saturday at Handmade and was keen to see how the festival was run and more importantly, I wanted to see a good range of bands spanning the 4 stages.

Alligatr performed in Scholar and my first thought was “is this band really as young as they look, or am I just getting old” – a recurring thought as most of the bands before 8:30pm appeared to be of university age. The two guitarists had their guitars in such a high playing position it felt as though they were imitating their heroes rather than exuding their own spirit.

Cave is an aptly named tiny venue in the belly of the Union, in which Peaness played, a young band of girls from Chester. The girls’ voices melded nicely in harmony and the jangly guitar tone set them apart from being just another rock band. I did feel for the girls though, as their sound-check lasted less than 5 minutes, and they immediately began their set, however they moved from straight into performing seamlessly and within a couple of songs the venue was packed.

Jacob Brathwaite was next up in Scholar, he is a fantastic vocalist with a band behind him to fill out his songs. I was particularly impressed by both his and the female singer’s voices – they were an good fit for the BBC Introducing stage. Backed by a wide variety of percussion, and featuring both acoustic and electric guitar, each song was well balanced and deserving of a bigger audience.

The festival’s schedule was very well organised, within one or two songs of a new band starting, each venue filled quickly once a performer elsewhere had finished. There was also a good variety of food stands given the size of the festival – perhaps this was one aspect of the ‘arts’ side of the festival, although from the time I arrived at mid-afternoon, I didn’t see much to offer in the way of the arts. Academy 1 and 2 brought with them a much better sense of an indoor music festival, rather than a student-run Battle of the Bands. Muncie Girls played in Academy 1, and the singer’s smoky voice was alluring but overall I felt they lacked charisma despite being on a larger stage.

Demob Happy was the first act I saw that had the swagger I was looking for, and they had a few fans lining the barrier who knew their music already. The trio are a quintessential indie rock band with great hazy vocals and gritty guitars. Pulled Apart By Horses gave a performance worthy of a headline slot, with both Tom Hudson and James Brown moving like firecrackers for the entire set. Watching the set from the balcony, it was the ferocity with which the band played that stood out, as though it was their last ever gig. Cabbage headlined Academy 2 – the big screen at the back of the stage coupled with the incredible smell of the wood panelling made for an wholly different experience to the other stages. Lee Broadbent was a man possessed, patrolling the stage and leaping from the drum riser, which definitely struck a chord with the audience.

Saturday’s headline act, Twin Atlantic, were in a league of their own (with the exception of Pulled Apart By Horses) in terms of their professionalism and charisma. Of course, being the final band on at a festival, they would inevitably draw the crowds, but I was drawn to Sam McTrusty’s vocals, which filled every crevice of Academy 1. They were clearly a band that are used to success, and their setlist was one that would suit arenas.

As Handmade Festival was hosted at Leicester University’s Student Union, and given the age of many of the acts, the festival felt very much like an event aimed at students, although there was a smattering of older audience members. The stand out bands were Twin Atlantic, Demob Happy and Pulled Apart By Horses, as they were in such contrast to the seemingly timid appearance of the majority of acts earlier in the day. I expect Jacob Braithwaite is a band on the rise, who I could imagine excelling with the backing of BBC Introducing, although he was an unusual offering for a predominantly Indie Rock festival. 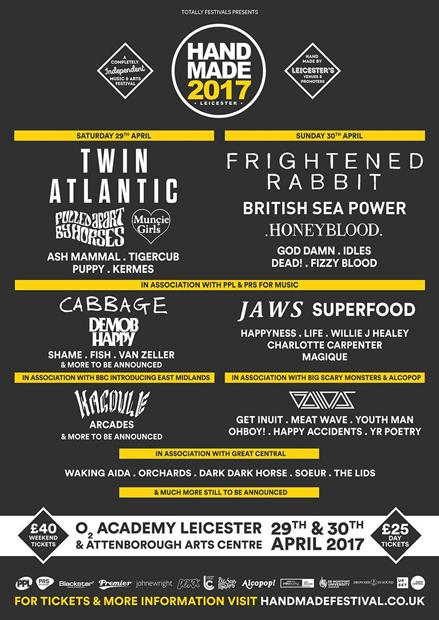