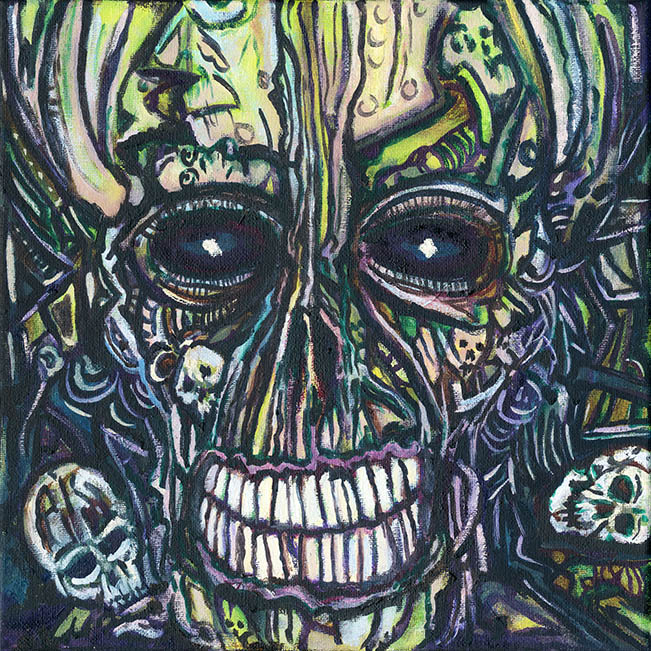 Glory be to the Gods of war and yore, the monolithic UK trio is back with an epic follow-up to 2014’s Into The Unfathomable Abyss! Trying to describe the band to people, I could only picture a creature of grotesque darkness. It’s pheromones triggering natural paralysis and fear with those not sharing its genus; throwing up ooze and viscous liquid of the blackest black ever seen. Like honestly, with a title track so flippin’ monumental, that it alone seems like an entire EP, this band has Bolt Thrower’s ethic with a bastard Corrupted and Soilent Green delivery. Just dirty, dank, and dark.

“Mortal Wound”, albeit a touch shorter than 7 minutes, opens with Jemma’s haunting graviton-heavy riffage, before a breakdown and steamrolling that’s sure to crush you, perhaps make you weep a little. No? It’s okay, I get it. The wondrous dissonant melodies of “Ever Decreasing Circles” as well as the crawling, the wailing… oh the wails. If it’s possible for feedback to be sexy, here it is kids! With “The Final Winter”, I get honest Pink Floyd vibes from this particular track somehow – if played by Tyranny perhaps. One pictures a slow motion crawl through an open battlefield during the dead of winter, light snowfall peppering the corpses of thousands, with carrion feeders and scavengers stealthily descending. Perhaps a mirage of death itself, briefly sitting silent among the piles of fallen souls.

The best thing about this bunch is that they have a myriad of dynamics not easily caught by some. The emotional feels and caresses are truly disguised therein this opus well; the dark dimensions not without a lone glimmer. The band has gone from strength to strength over just the last few years, but Candlelight better push this hard, not just simply as a fine example of Funeral Doom, but as a modern doom classic in the aging. This is very easily on my end-of-year list, and I have the feeling I won’t be alone in the sentiment when the time approacheth.

“Don’t let it know you’re afraid, it can sense your fear…”

01. Ascending Into Shimmering Darkness
02. Mortal Wound
03. The Legend of Abhartach
04. Ever Decreasing Circles
05. The Final Winter

Check out a full stream of Ascending Into Shimmering Darkness: