It’s fair to say that following the release of “Doris,” the first single from their new album, Suicide Silence has split their fanbase in two. Despite an alarming number of fans taking to the internet to voice their disgust at the new direction, it would seem that the band are taking it all in stride as we discovered as we spoke to frontman Eddie Hermida ahead of the album’s release.

Hey Eddie, how’s it going?
Eddie: It’s going good my friend. I’ve just arrived in the studio on this beautiful day to get these interviews done before we start practising.

Suicide Silence is out this week and already there has been a lot of noise from fans about the direction. Were you prepared for the wide spectrum of reactions?
Eddie: Absolutely! Every song, every piece of art, every piece of work on this record was written with the absolute intention of stepping outside what people expect from us as a band. This record and the direction is very true to our influences, who we are as people. We’ve changed in ten years, we’re not kids anymore. We’ve not got that hunger to show aggression that way anymore. Personally, I see that as immaturity and, as you explore music and different songs, there are so many ways to explore darkness and depravity and aggression so, yes, we knew this record was going to ruffle some feathers.

Considering you ruffled feathers when you took over from the extremely popular Mitch Lucker, you must be well-versed in taking stuff like this on the chin?
Eddie: You know what, the most disappointing thing when I look at what people have said is when the same people have churned out the same things they said four years ago. You know “you should change the band name,” “Mitch wouldn’t approve of this,” “Mitch wouldn’t have done this” blah blah. You know coming out with the same stuff over and over again is, ha, that’s the definition of insanity.

So, let’s talk about the direction of the new record, was it a big challenge to write this album?
Eddie: Yes and no. Yes, it was a big challenge but we all knew with this record that it was all or nothing, it really was life or death for us. We couldn’t do this half-heartedly, it was a case of fully submerging ourselves into this to find true heaviness, real aggression. This record is real, it is the sound of the whole band going crazy, all of us losing our minds and it took Ross Robinson to get the most out of us because it was a scary world that we were exploring with this sound. We aren’t one dimensional, we’re human beings and wanted to do something more challenging than “deathcore”.

Taking into consideration the direction you wanted to go in with this record and Ross’ track record developing bands like Slipknot and Korn, it would be fair to say Suicide Silence and Ross were a perfect match?
Eddie: It was a double-sided thing with Ross but, yeah, he was the perfect person and he is someone we’ve wanted to work with in the past but haven’t been ready to throw ourselves into it. I don’t think we were emotionally ready because, with Ross, he won’t accept anything less and if you aren’t fully prepared for it then you will lose your mind. 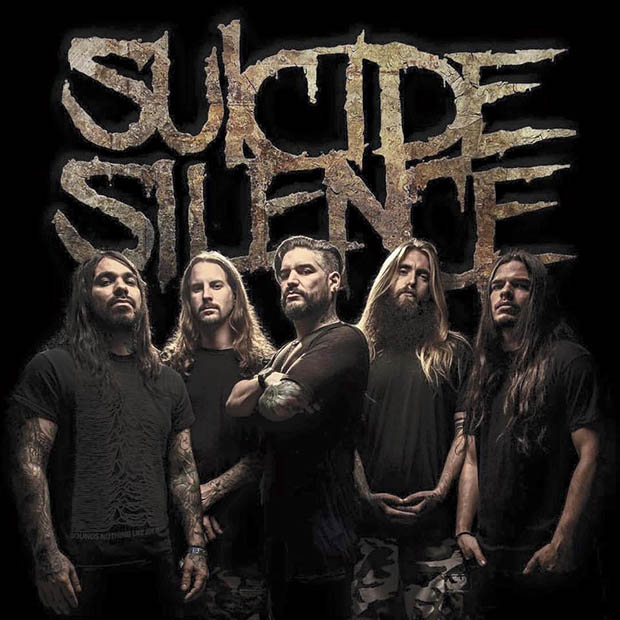 Listening to the album, there is quite a spectrum of “heavy” on there from the more brutal songs like “Hold Me Up Hold Me Down” to more experimental tracks like “Conformity” and “Dying In A Dead Room”. How challenging was the more experimental material to write?
Eddie: “Conformity” was probably the most difficult, “Dying In The Red Room” just kind of flowed. The main riff, the verse riff, Mark wrote on the bus back in October when we were on tour with The Black Dahlia Murder. It was inspired by a substance, I won’t say which one but I was sharing the trip with Mark and it kept us tethered to earth. As I was listening to this riff, I knew that when we took it to the studio it would just flourish and it did. The lyrics, the tones, the melody, it all poured out. The inspiration for the lyrics came from a really strange experience I’d had. I hadn’t really been sleeping much for a while, maybe three to four hours a night for about a month. One night I was having this lucid dream but I was fully awake. I could see this dark figure stood over me with a gun to my forehead and shooting me. I remember feeling a coldness, like blood dripping down my face and, even though I was awake, I didn’t want to step out of the dream and grab my phone because I knew it was just that. It was that experience that inspired the song, it’s about living life, enjoying it and not letting those faceless ghosts beat you.

Touching on something you mentioned earlier about heavy songs being not just face-ripping blast-beats, are there any particular songs that you think epitomise this?
Eddie: You know, there are songs like “She’s So Heavy” by The Beatles, there’s also stuff by Elliot Smith who wrote some really heavy tunes. He committed suicide because everything got too heavy for him to take. It’s stuff like that is the embodiment of this world of chaos we live in.

What about vocalists, who would you say you are inspired by?
Eddie: Oh there is a lot. I’m a huge Mike Patton fan of his work in Mr.Bungle, Tomahawk and also the real heavy singers like Jonathon Davies from Korn, Corey Taylor, even Fred Durst. Then there are people, Serj from System Of A Down, and also people like Chris Barnes and George from Cannibal Corpse. The thing is with all these people is they have all been really nice people, even Fred Durst. You hear stories about certain people being not nice in person when you meet them but when I have met people like that, they’ve always taken the time to talk.

Okay, we’re running out of time, one thing I wanted to ask was your take on the Thy Art Is Murder spat that the press have built up?
Eddie: My take? I think people didn’t really read the interview properly. I have nothing but love for Thy Art Is Murder, I’ve spoken to Andy, our guitarist has spoken to Sean. We’re all friends, everything is cool. The only person we haven’t spoken to is CJ. I don’t really feel like I have any need to really either. Just looking at what he has said, it’s clear he’s milking it and that’s fine, it’s all cool. The thing is there is no money in the death metal scene, there is no fame, there is no big thing and the reaction just proves what I said. It’s a proven fact and if people don’t see that or get it then they’re not paying attention to it but I don’t care. We’ve always wanted to move away from that rigid, deathcore sound but if bands want to ride on our coattails and just write the same style over and over again then that’s fine. We don’t want to do that but it’s fine if bands want to stick to their formula be it Thy Art Is Murder, Black Dahlia Murder or Cannibal Corpse whoever it is. People just want to make sensationalist headlines out of nothing, they just want to feed into hatred. I personally don’t want to write two songs that just sound the same.

Right, I think we’re running out of time Eddie, just looping back to what we talked about at the start. Having read through hundreds of comments, have there been any that have really made you laugh?
Eddie: You know, I find when people are just churning out the same stuff to be dulling to see. I do laugh though when I read some of the comments especially the really extreme ones because it’s like they’re trying to make me feel like shit but, really, they don’t know me and they don’t know what I’m going through. Like when they say stuff about Mitch, it’s the same, they didn’t know him and it just rolls off my back. Sometimes I have to laugh when they comment on stuff I post. Like, the other day, I posted a photo with my girlfriend where we did a face swap and one kid commented about how it was uglier than our two singles. I laughed because, you know what, people are talking about us whether it is good or bad. At the end of the day, we wrote this record for us because we are musicians, we didn’t write this record for fans but, if they’re talking about us then that is fine.