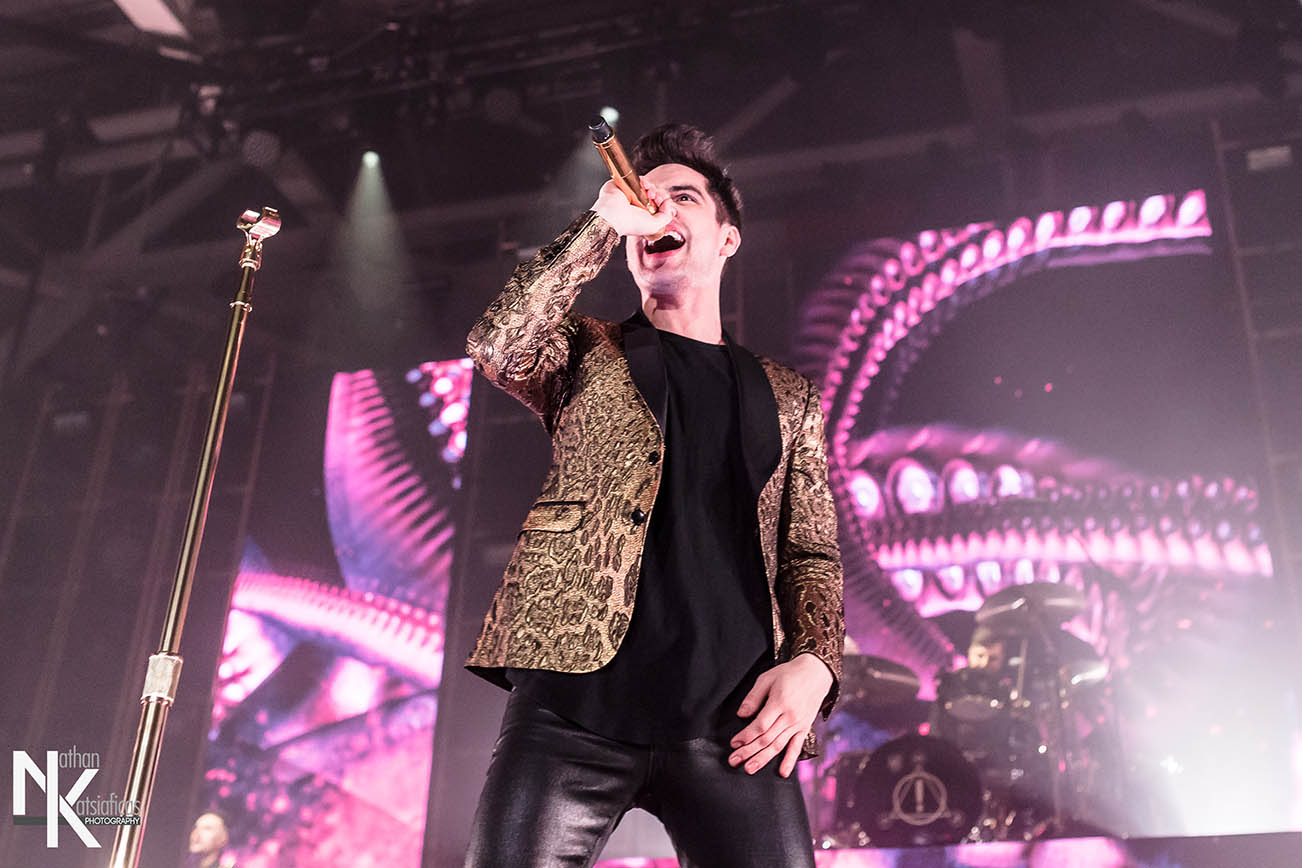 Easily one of the biggest tours this spring, Panic! at the Disco have just set off on the “Death of a Bachelor Tour,” a massive two-month headliner across the United States in support of their 2016 album by the same name. Accompanying them on this trek is support act MisterWives and opening act Saint Motel. We caught up with the tour on its third night, on February 26th as they came to play before a sold-out audience of more than 6,000 fans at Portland, Maine’s Cross Insurance Arena!

The venue was packed by the time “dream pop” band Saint Motel emerged to warm the audience up with a short yet punchy 6-song set that got fans bouncing in their seats. I wasn’t expecting to enjoy them as much as I did—not only do these guys sound great live, they also have a great stage presence, especially vocalist A/J Jackson who divides his time between keys and vocals and climbing stage props like they’re his jungle gym.

After a short break, New York City natives MisterWives picked up where Saint Motel left off, getting the whole floor (which was seated) moving and dancing along. Their set was drawn predominantly from their 2015 release Our Own House, but featured their latest single “Machine” from their upcoming record Connect the Dots, due out on May 19th. Musically, they sounded great, but it was the energy that frontwoman Mandy Lee and her cohorts brought to the stage that made their performance so much fun to take in.

As the stage was cleared and prepared for the last act of the night, you could literally feel the excitement and anticipation of the crowd. After some setup, the lights dimmed and a clock with a 10-minute countdown appeared on the backdrop. I swear, those felt like the longest ten minutes I’ve experienced in a while! As the final seconds ticked down, the energy in the room rose to a fever pitch—with fans counting down out loud as the clock reached 0 and the band began to emerge onto the stage to the sound of the opening notes of “Don’t Threaten Me with a Good Time.” The crowd erupted as frontman Brendon Urie, clad in a gold blazer and tight leather pants, danced his way onto the stage, his entrance punctuated by a burst of gold streamers. The whole crowd sang along (and continued to much of the night) as Urie moved about the stage, golden microphone in hand. Their set continued from with another song from their 2016 record, “LA Devotee” and older track “Ready to Go (Get Me Out of My Mind).”

The production on this tour is nothing short of visually stunning, with enormous flat panel screens depicting synchronized animations and video, bursts of pyrotechnics, confetti, and an amazing lighting display. As their set continued the stage setup altered, with Urie emerging beneath the drum riser at one point, pushing a piano out from under it to launch into fan-favorite and classic “Nine in the Afternoon.” This was followed by the anthemic “Miss Jackson” during which Urie backflipped off of a stage riser mid-song. After this, a video of Urie tied up and being tortured played over the screens, while Urie secretly made his way through a network of tunnels in the arena to the rear of the floor section.

As the video ended, he surprised fans, suddenly emerging on a riser by the soundboard astride a white grand piano, performing “This Is Gospel.” The band launched into “Death of a Bachelor” next, while Urie—having hopped off the piano—began to make his way through the crowd, pausing mid-song to hug fans or comment on their shirts all the while. Their set went on to include a Billy Joel cover, a drum solo by Urie himself, a cover of Queen’s “Bohemian Rhapsody,” and a powerful performance of their song “Girls/Girls/Boys,” which was accompanied by video of gay rights protests. Throughout their 22-song set, Panic was flawless—it was truly an unforgettable evening and one of the best performances I’ve ever witnessed. But alas, all good things must come to an end—and this night ended with two great Panic! at the Disco songs, “I Write Sins Not Tragedies” and “Victorious.” Luckily, this tour has just begun and continues on through all of march into mid-April, so there’s plenty of time to catch it (check out the remaining dates below)!

*Panic! At The Disco and MisterWives Only