Hailing from sunny San Diego, California, Carnifex has maintained their status as one of the darkest and most macabre bands on the deathcore scene since 2005. This darkness peaked on their latest record—a brooding, black metal inspired LP called Slow Death.

I had the chance to see them play some songs off of Slow Death, as well as many of their earlier tracks, at the Brooklyn, New York stop of their latest tour with She Must Burn, Lorna Shore, Rings of Saturn and Fallujah.

The dimly lit, tiny venue that is the iconic Knitting Factory was packed to the brim with rowdy metal fans on the unseasonably warm night of February 23rd. The previous bands had successfully fired up the crowd, and nobody was standing still in the minutes between sets.

Fans eagerly chanted “Carnifex” as the venue lights dimmed and the eerie intro music to “Dark Heart Ceremony” began. The band piled onto the small stage and delved straight into their set. Starting with tracks off of their latest album, “Dark Heart Ceremony,” “Slow Death,” and “Drown Me In Blood.” 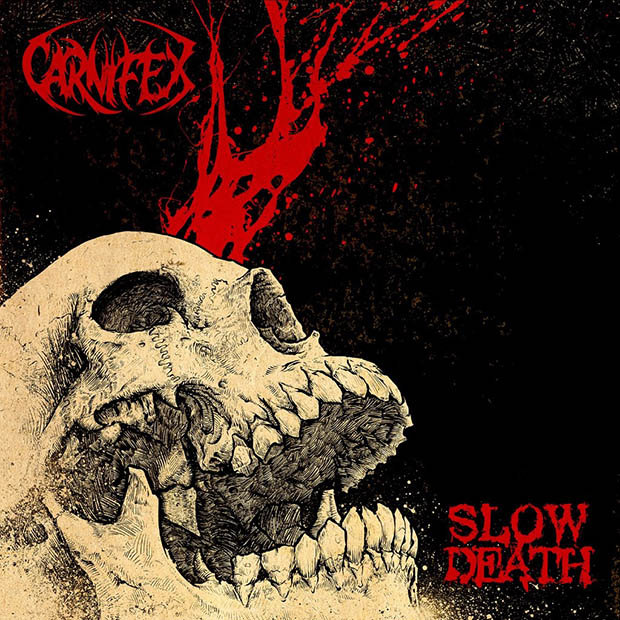 The pit swallowed over half of the venue, as those who don’t mosh found themselves clinging to the back wall to keep from getting swept up in the wild, violent tsunami of New York style hardcore dancing. As Carnifex is known for their blisteringly heavy breakdowns, the unruly mosh pit grew throughout, becoming more and more engorged each time vocalist Scott Lewis commanded a circle pit.

While they started things off with their newest music, the band didn’t hesitate to play old school fan favourites. As the audience eagerly begged for “Slit Wrist Savior,” Carnifex obliged. Although Dead In My Arms was released 10 years ago, the band’s performance was as emotional and clean as ever, and the audience reacted fittingly. This was further affirmation that a good breakdown never gets old.

Carnifex has always been amazing at writing curt, thrashing bangers. Songs rarely surpass the 5-minute mark, yet are always heavy enough to make a lasting impression on the listener.

They continued with some newer songs including “Die Without Hope,” “Six Feet Closer to Hell” and “Hatred and Slaughter.” The enthusiasm never wavered, as Scott Lewis made the tiny venue his own personal stomping ground holding the audience’s full attention and obedience throughout. His commanding presence was undeniable. He would say, “jump” and the tiny, dingy venue shook with bouncing moshers.

Check out the music video for the song “Slow Death”

Guitarist Cory Arford aced every riff, all while providing seamless backing vocals in tune with Scott’s volatile growls and screams throughout. Given their music’s rapid-fire speed and complexity, the full band’s delivery was flawless from blastbeat to breakdown.

The final few songs were what everyone was waiting for. The crowd’s unruliness rose in anticipation of the infamous breakdown in “Lie To My Face,” signalled with the sample of a guy yelling, “what the fuck!” which, of course, everyone screamed along to.

Next, Carnifex did something a little different. Scott teased that they would be playing something rare, and asked the crowd to respond. He sang: “If you’re 555…” and everyone instantly as if it were muscle memory, yelled back “I’m 666!” leading into a fiery cover of Slipknot’s classic “The Heretic Anthem.”

Finally, they closed their set with the definitive track “Hell Chose Me” and one last, destructive circle pit.

If you haven’t had a chance to see Carnifex yet, they are still on tour in the U.S. through March and will be in Europe this summer. Their talent, passion and pure brutality are unparalleled—if you get a chance to witness them in the flesh, go.