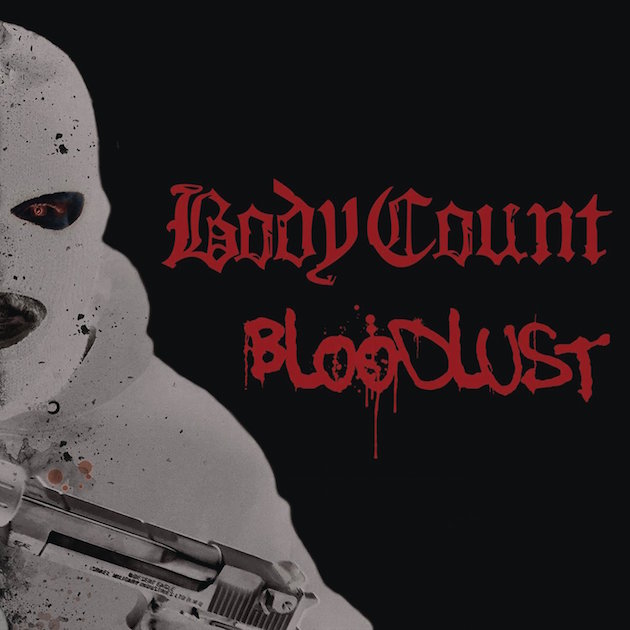 Ice-T has been making politically charged, socially conscious music for more than three decades. The lyrical content on Body Count’s sixth album Bloodlust is not unlike the band’s previous material – or even his output as a rapper. And maybe this is why Ice-T is still so pissed off. Granted, protest songs have never changed the world, but going back to the band’s 1992 debut album, he certainly has attempted to raise awareness of social issues that many artists either avoid in their pursuit of more commercially viable topics or lack the balls to take on in the first place. For this, you have to admire the man who has never once attempted to appeal to the masses and always utilised music as a means to give voice to otherwise ignored social issues.

The eleven tracks on Bloodlust have more anger, vitriol, and raw power than most of his metal peers can muster on their best day. Songs like “The Ski Mask Way,” “No Lives Matter,” “Black Hoodie,” and the title track are fast, hard numbers that put you in a headlock and challenge you to resist headbanging. “Here I Go Again” is a gory, violent mid-tempo track that starts with the sound of a thunderstorm and is further fleshed out by samples of people screaming in pain. Its dark and ominous feeling is only matched by “This is Why We Ride,” an ode to street violence that is as powerful as anything the band his released in the last 25 years.

Body Count also recruited Megadeth’s Dave Mustaine (who adds a scorching guitar solo to album opener “Civil War”) and Soulfly’s Max Cavalera and Lamb of God’s Randy Blythe who adds vocals to “All Love is Lost” and “Walk With Me,” respectively. However, the band didn’t bring in these metal titans to ghostwrite material, but to compliment their songs and elevate them to new heights. That in itself is a testament to the group and their talent. Often only considered Ice-T’s metal side-project, Body Count is a powerful act in their own right. Indeed, it’s a damn shame Ernie C. isn’t more widely regarded as a kick-ass guitarist. Throughout Bloodlust he provides bulky riffs and flesh piercing guitar solos that sound inspired rather than obligatory metal clichés.

While politics and social issues are at the forefront, you don’t have to buy into the message to enjoy this album. This would be a killer release even if Ice was singing about washing his car or buying coconut water at Whole Foods. That said, great metal records, or at least the ones that have a legacy beyond their release date, have always been politically charged. Bloodlust is no exception and it couldn’t have been released at a better time. If you’re angry about today’s global political climate and love hardcore metal, this album is your wet dream.

Check out the band’s video for the song “Black Hoodie”