When I get offered to interview a musician or band, I’m usually a fan of the band. When I’m not, it’s completely cool because I’m not pretentious and I’m game to meet new artists and new creative forces behind different scenes. When I am, that’s a whole different story. I want to get into their brains, kind of. Dive into their history and the vicinity they came up in. I love knowing origins and birthplaces of certain bands or scenes and it makes me happy to see that they’re still very much a part of it. In this case I had the chance to interview one of my teenage/adult life heroes: Mr. Brendan Kelly of the Falcon/Lawrence Arms/Slapstick and Wandering Birds.

If you have been living under a rock or large obscure surface area, the Midwest U.S has been birthing some of the best punk rock bands out there. The Replacements, Naked Raygun, Big Black, Shellac, Trenchmouth, Husker Du, Rise Against, 88 Fingers Louie, Off with Their Heads, Teenage Bottlerocket and the list will definitely go on. The Falcon basically calls their home Chicago, IL. It’s the hometown for 3 of the 4 members (Dan Andriano of Alkaline Trio, Brendan Kelly & Neil Hennessey of Lawrence Arms) where as lead guitarist Dave Hause (The Loved Ones) is a Pennsylvania gentleman.

I asked Brendan right off the bat, when did his debut in the Chicago punk scene start? “…When I was a young boy I started going to shows at this venue called the Gateway theatre and I didn’t have an older brother or friends with older siblings to show me stuff. I grew up near an independent record store and bought a lot of records that turned out to be all punk rock records…I didn’t know that punk rock was a thing…” Kelly stated while recollecting about his old neighborhood in the windy city.

Kelly said, “…I went to a show at the Gateway theatre and saw this band called Oblivion, they were a big Chicago band at the time that never really broke out of the city and the singer Pete Kourim was kind enough to take me under his wing and give me advice….” He adds to the lexicon of Pete Kourim’s wisdom “…1st piece of advice he gave me was 50% the audience and 50% the band… can’t play a good show if the crowd isn’t on board and no matter how good the audience is, if you’re not playing well it’s still not a good show… 2nd piece of advice was you’re only as good as your last show… after that I thought ‘cool’ and that’s where I felt indoctrinated into the punk scene…I was about 16 years old at that time…”

I’m a massive fan of Brendan’s most successful band Lawrence Arms, but there’s a plethora of bands from Chicago that also stole my heart in my youth, and in my current adult years, like Alkaline Trio, Rise Against, Fall Out Boy, Flatfoot 56, Typesetter, Real Friends, Meatwave and La Armada. I asked the Falcon front man what is it about Chicago, IL that breeds some awesome bands with influential clout and presence? The Falcon front man mentions, “…You know what I think it is?… L.A had Black Flag, Dead Kennedy’s and NOFX and New York had birthed everything from hardcore to generally punk rock with bands like Ramones and Bad Brains… Those scenes are so lotted and loved… in Chicago, we’ve been plugging at it for a long time…” He Continues, “…now there’s bands like Rise Against, Alkaline Trio and Fall Out Boy who became HUGE… but in the early ’90s it seemed and felt like nobody cared…with that underdog spirit, which is the one of the main reasons why people get into punk rock in the 1st place, it became something that people can empathize with and relate to… we became the punk rock of punk rock, the losers…smaller city syndrome….”

One thing I have always loved, and it took me a while to say this in this interview, is aesthetics. For example, bands’ album art and art direction. Working in the current music scene here in Toronto, ON I realize that branding and aesthetic is key and crucial, aside from the obvious quality and talent of the artist or band. I remember buying Lawrence Arms’s Apathy & Exhaustion on CD when I was 14 and thought the album art was so cool and bizarre in a positive way. That record came out at the same time as other notable punk bands from that era like Pennywise, No use For a Name, Lagwagon, MXPX, etc. and their art direction was good but doesn’t hold up today. If those bands came out with those records today and used the same concept as they did in 2002 or 2003, generally people would dismiss the release and possibly laugh at it’s dated look.

Lawrence Arms, however, used a simple painting of a man in pain and shambles with different color schemes that makes it appealing to really any time or generation, adding longevity to the band’s brand and reputation. That Fat Wreck album is now 14 years old. The former Slapstick member recollects “… So for our album art we like to employ artists that we know, love and respect… for that case for Apathy & Exhaustion our friend Josh was apprenticing to be a tattooist at the time and was a great painter…we told him; do it, we trust you… we handed him the record and let him give us his interpretation….” He adds, “… also with Dave Holtz, we went with him a lot too, we just hand him whatever release or material and get him to show us what he’s got…it’s really rewarding to collaborate on an audio/visual seesaw, for lack of a better term…it’s neat to see someone else’s interpretation of what YOU’VE made….” 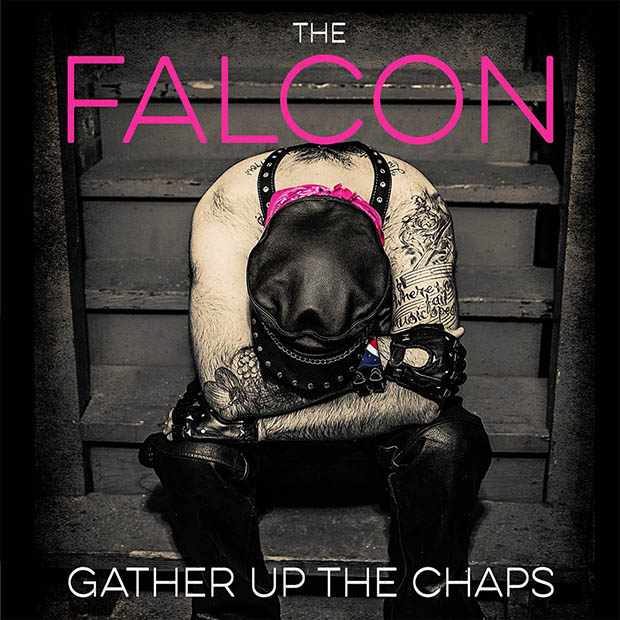 A long time ago my old band got compared to The Falcon and Lawrence Arms and it caught me off guard. I didn’t expect that but subconsciously it made sense; Lawrence Arms lyrics and melodies are some of my favorite and most influential lyrics. I loved the catchiness to their tracks and how they used lyrics and words differently than a standard 3 chord punk band. The other element, which always made me love the band, was the satirical and sarcastic undertones they bred with the careers worth of music they’ve released. It got weird and dark and/or silly and funny throughout their different full-lengths and EPs.

Kelly’s one of the main song writers and I was always curious to know if comedy or comedy writing was or would ever be a thing in his lengthy career. He slated “…I do a lot of writing beyond Lawrence Arms, Falcon and Wandering birds… I think it’s important to maintain a sense of humor not necessarily funny but to have a sense of humor…a band like Propagandi, who are deadly serious but, have a great sense of humor…. You can tell they understand the 360 degrees of the human condition… having a sense humor is a big part of being in that human condition… where as a band like Black Veil Brides, who’re dead serious, are so dorky… they dress like vampires, know who else dresses like Vampires? Alkaline Trio and they’re awesome and have a great sense of humor… the difference is crucial… regardless if we succeed or fail, that’s always something I pay attention to, recognizing the humanity….”

Brendan’s not a young thunder cat regardless of him ageing super well. He’s not an aging dinosaur, but he’s been around and knows what the deal is. I asked why, at his age, does he still choose to be in a punk rock band and be a part of this community? Most musicians in punk and hardcore bands of that generation are playing comeback shows for huge guarantees at Riot Fest or living a normal “American Dream” kind of life. Whereas he’s still writing new and credible music with different projects and co-runs a small yet strong independent record label, Red Scare Industries.

Brendan claims, “…1st answer…well this community has done so much for me… it made me a bunch of my friends, allowed me to meet my heroes, travel around the world and I’m so grateful to punk rock for the opportunities that it provided me …2nd answer… I’m too old to do or learn anything else…it’s a labor of love you know… I can get a job at the bank but that won’t take me to Japan where I can stay in the Hotel where ‘Lost in Translation’ was filmed and drink sake till’ 3 am and over look Tokyo….” He gloated that because Lawrence Arms toured Japan and stayed at the Tokyo hotel where ‘Lost in Translation’ was filmed in the mid-2000’s. It felt almost juvenile or childlike, in a positive way, when he explained to me the things that he’s done in his musical career. The humility of his tone and diction was humbling and earnest. Not everyone gets to say they’ve travelled the world because of their lyrics and bass guitar lines.

Check out the song “Hasselhoff Cheeseburger”

I also really like knowing what current acts, regardless of genre, the people I interview are bumping on the smart phones. What new release or live acts get musicians like Brendan Kelly going and most of all; stoked. “…I really like Kendrick Lamar and Lady Gaga… I’m not an esoteric punk rock dude… I still forever love Propagandi, they’re so good…I’m really into The Menzingers, Worriers, Arms Aloft, the Sidekicks… I mean I’m a partner with Toby in Red Scare (the label the Falcon is on) and I like the bands I sign… I’m into the bands before I release their records….”

I got some great responses to the questions I posed to Kelly, but in my classic style I want to bro down with the Chicago stalwart and find out the real deal. The Bassist claims “…Movie I’d compare my life and career to?… ‘Revenge of the Nerds’… I was a nerdy kid and always got picked on and it’s one of my favorite movies growing and even today….” I always follow up with the, “Who would you get to play yourself in a hypothetical movie?”, just to see how and why they’d give me the actors name they give me. “….Who would play me? Shaq…Shaquille O’Neill…” Kelly replied. Not sure why or how, but that’s the best answer I could have ever expected.

Most of my favorite bands are musicians who are older than I am. I love seeing how punk rock really isn’t just a facade you put on in your teens or 20’s when you feel like you have a statement or something to say. It’s more of an actual lifestyle and community where you can grow up but still have the humble and modest approach to life, art and relationships without pretension. Whether you’re running a label or singing leads in a punk rock super band, it’s always comforting and calming to know I, along with legions of fans worldwide, didn’t waste my time. Hanging out and chatting with my heroes sometimes can be scary and intimidating. However, that Saturday evening in Hamilton, ON where I got to chat with the bass player of one of my favorite bands was one of the most humanizing engagements I’ve had in a long time. Long live “the Windy City”.