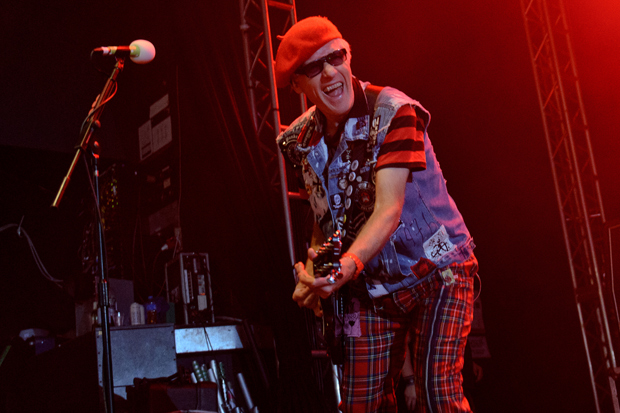 Celebrating the fortieth anniversary of their debut single “New Rose”, it’s safe to say that there are very few bands still hanging around from that era, let alone bands from that era who can match punk legends The Damned. In fact, watching them tearing up the stage at the O2 Leeds Academy, it’s safe to say that very few modern bands who put in the same amount of energy as Captain Sensible and his reprobate bandmates do.

“I’m Captain Sensible and you might have seen us on Top Of The Pops when it played proper music not the shit that they put on it now” jokes the colourful guitarist as the band take to the stage. Unsurprisingly his opening rant illicits a huge cheer from the crowd who are made up of a mix of hardcore fans who’ve followed the band throughout four decades and a few youngsters who have learned at a young age that punk rock didn’t start with the release of Green Day’s Dookie. None are left disappointed as the band treat the crowd to a twenty-seven songs set that includes a raft of classics, a few covers and their entire Damned, Damned, Damned album from start to finish.

Frontman Dave Vanian matches Captain Sensible’s on stage antics with a flawless performance and while the chaos and debauchery of the punk rock scene may be long gone, there is something about watching the band completely owning the stage that makes them still more punk rock than anything the media puts under that label. There’s no need for autocues or any forgotten lyrics, just a band who look as though they’re enjoying playing the likes of “New Rose” and “Smash It Up” as much now as they did back when punk rock had parents across the nation shitting themselves in horror. Happy Anniversary guys!

Check out the song “New Rose”